It’s been a long time coming but I’m finally upgrading my dust collector to something appropriately sized for my shop! 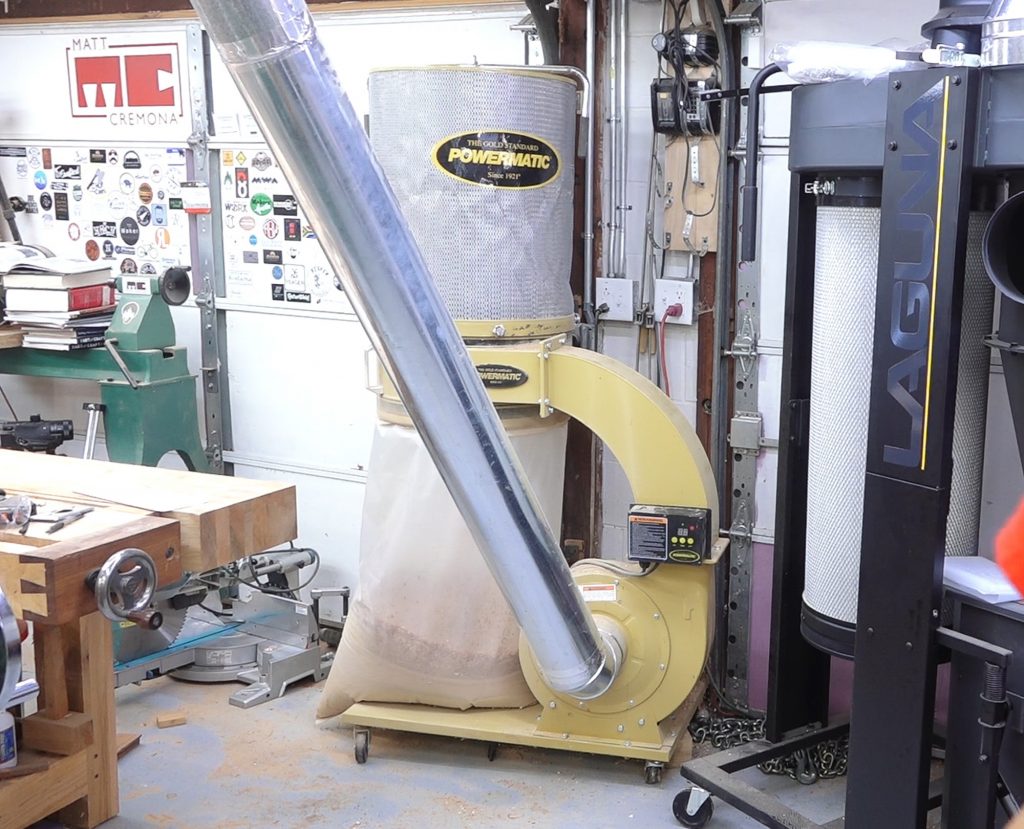 I bought this single stage dust collector when I was in my only shop back in 2010.  It worked pretty well in that space.  I had my tools clustered in one corner of the shop so the runs to each tool weren’t that long.  So performance was alright.  In this shop though, it’s undersized.  The runs are longer and the tools I have now have grown in size. 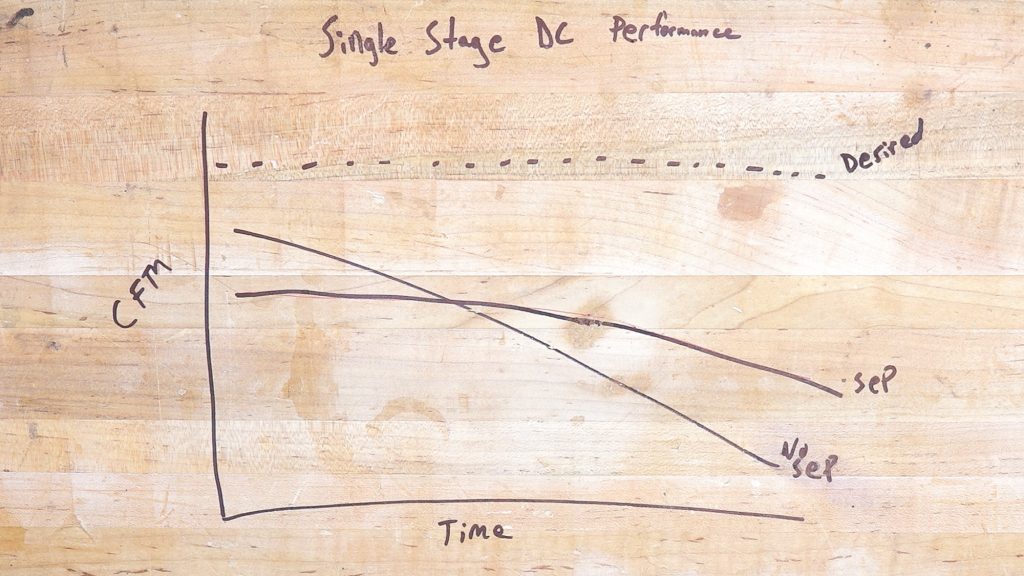 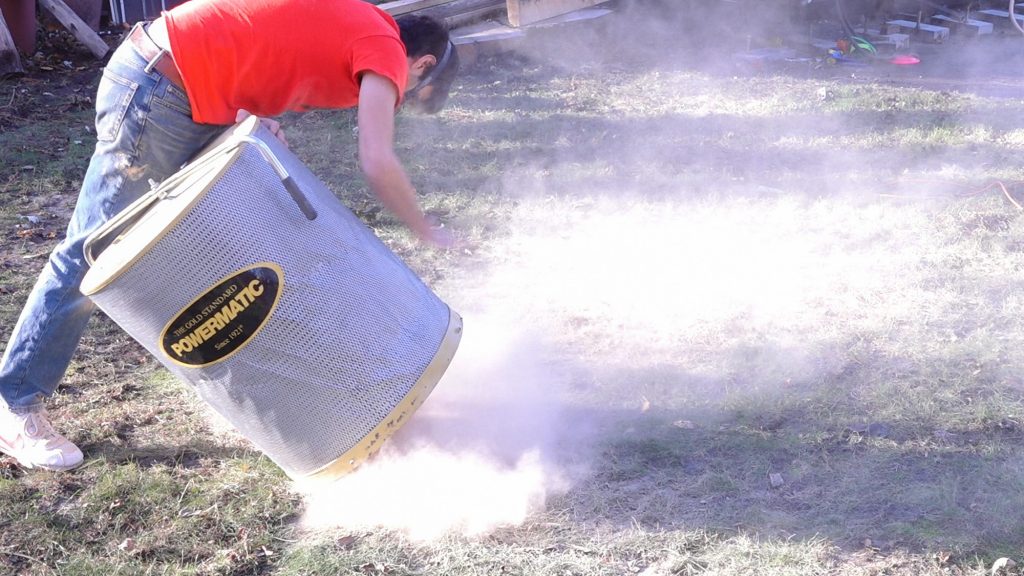 I took the initial airflow readings which will represent the typical case and took the filter outside to clean it.  The flappers which are supposed to dislodge the dust trapped in the pleats don’t really work so the best way to shake the dust loose is to beat the crap out of the filter.  After a few minutes of that (and a few piles of fine dust on my lawn later), a leaf blower can be used to blow off any remaining dust (there’s still a lot trapped in there).  I reinstalled the filter and tested the airflow again.  This test case will represent the best case scenario and establishes the maximum amount of air this collector is capable of moving. 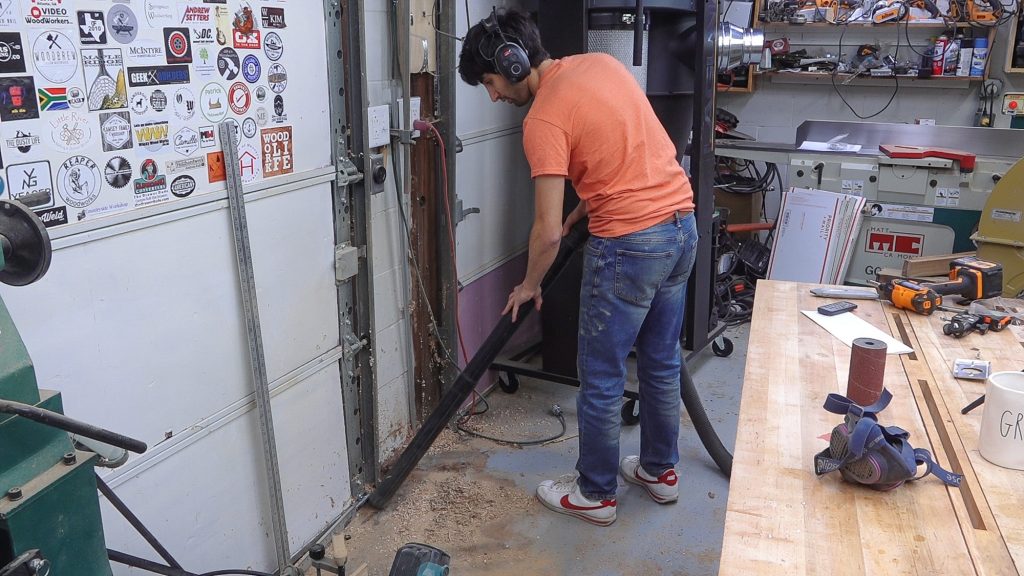 With the tests out of the way, I can removed the old collector and clean up the mess that was behind it.  All this sawdust is from dust leaking out of the collection bag if the bag get nicked by something and tears slightly. The selection process for me was pretty straight forward.  I have some unique space constraints.  Firstly is overhead clearance.  Where the collector goes, I have a max ceiling height of 85″.  Compounded with that is the height of the garage door rails in the same area.  So the body of any collector would need to fit under these rails and a motor or something narrow could fit up between the rails but under the ceiling height.  The only cyclones that fit this constraint are the compact/mobile cyclone which limits me to the manufacturers that make that style of collector. The next space constraint is the area the collector goes in and the way my ducting enter that area.  Ideally, I’d need a collector where the inlet could be rotated to be perpendicular to the long axis of the collector.   Some collectors have a fixed inlet straight out the end of the collector so the collector would have to be placed in line with the pipe or a 90 degree elbow would have to be installed right at the inlet.   Both of these set ups wouldn’t be that practical given the space I have for the collector so I opted to only look at collectors with adjustable inlet angles.  JDS and Laguna both make collectors that can be adjusted.  The 3hp JDS is always on backorder so I decided to go with the Laguna since it has better availability. 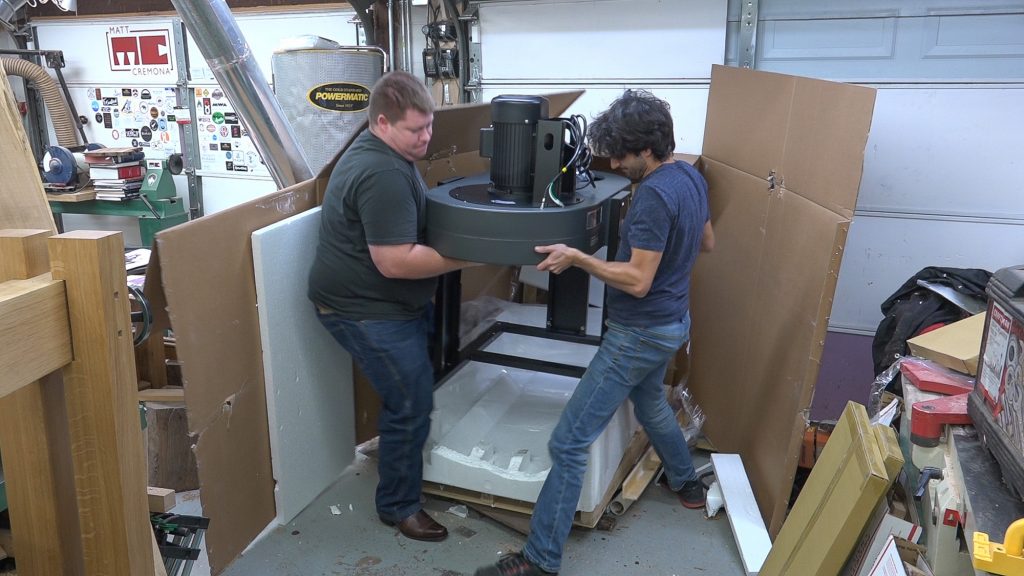 Unboxing the cyclone was pretty easy.  Everything was well packaged and arranged in the crate.  The body of the collector come partially assembled.  It’s pretty heavy and the styrofoam has a good grip on it.  It would help when removing this part to break up the styrofoam holding it to the bottom of the crate. 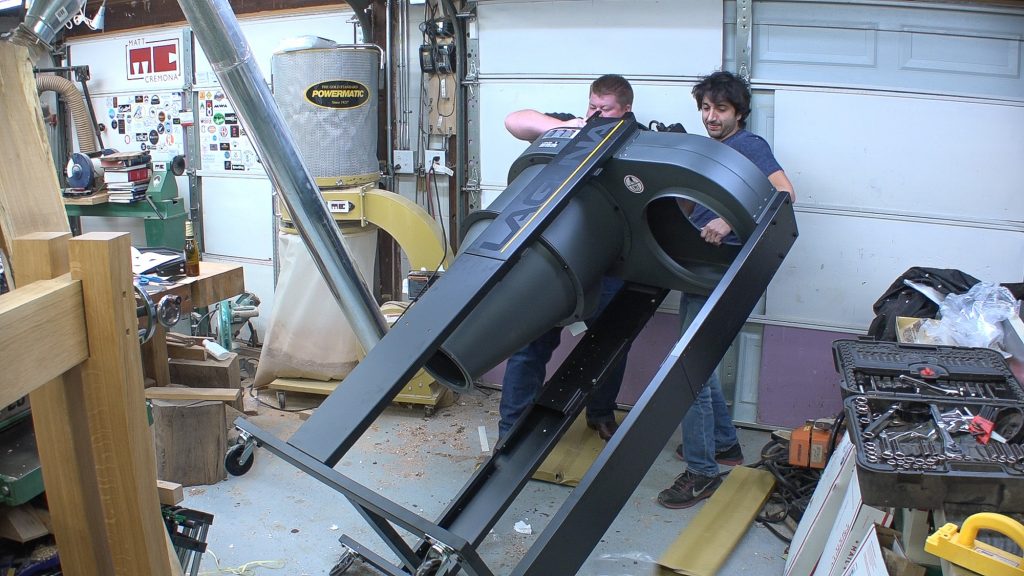 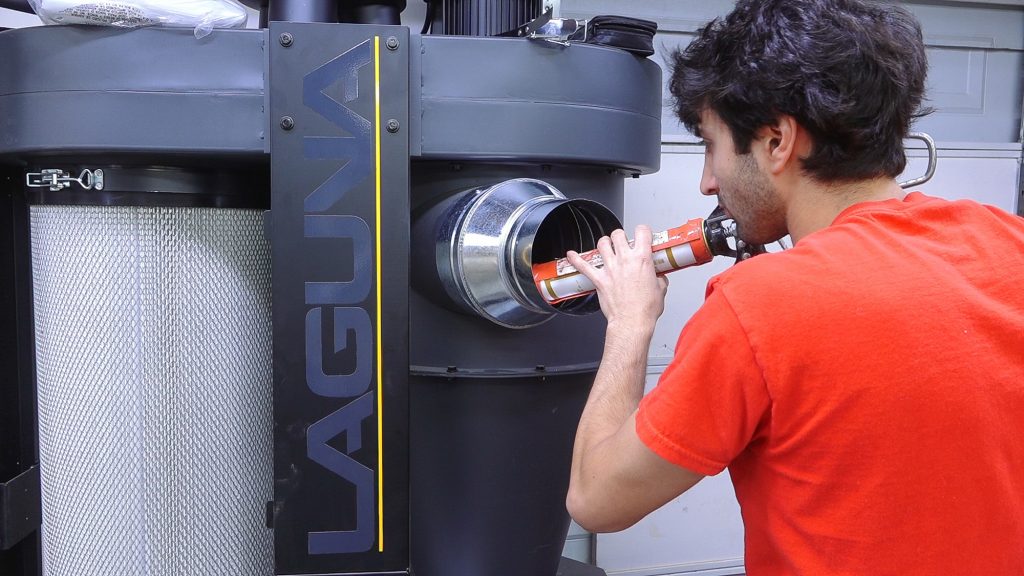 The trunk in my shop is 6″ and the inlet is 8″.  I installed a reducer by screwing it to the inlet and sealing and smoothing the transition with silicone.  The cyclone also comes with a splitter that reduces the inlet to 3 4″ ports. 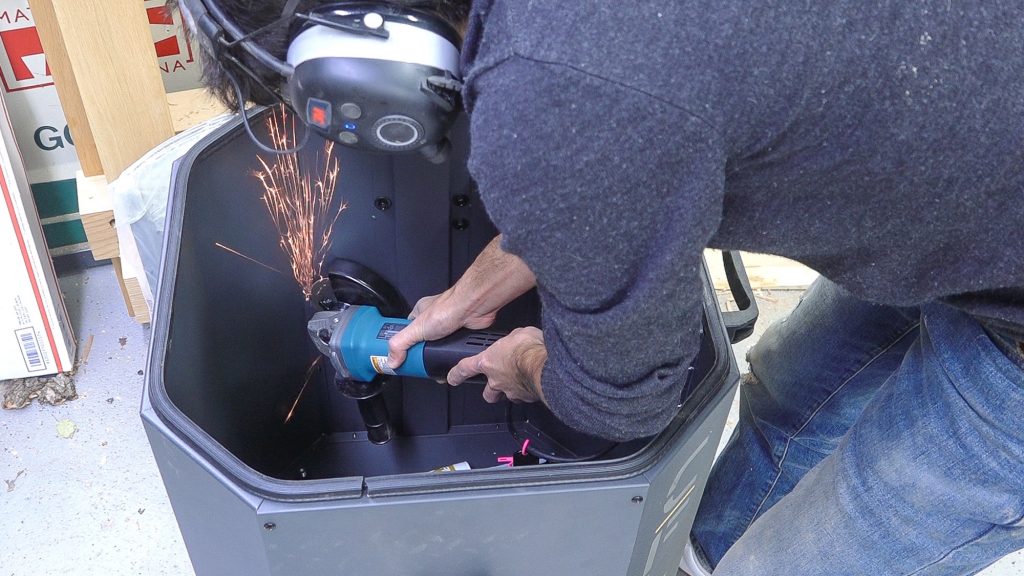 The drum comes a sheet steel that gets screwed together.  The screws are much longer than needed and sharp.  They provide rubber covers to go over the ends of the screws to protect the collection bag from getting holes poked in it.  I don’t plan to use bags with this collector so for a cleaner look and feel, I cut the screws flush.  This bin also needs to be sealed with silicone.  It would be much cleaner to run a bead of silicone on the seams before screwing the parts together. 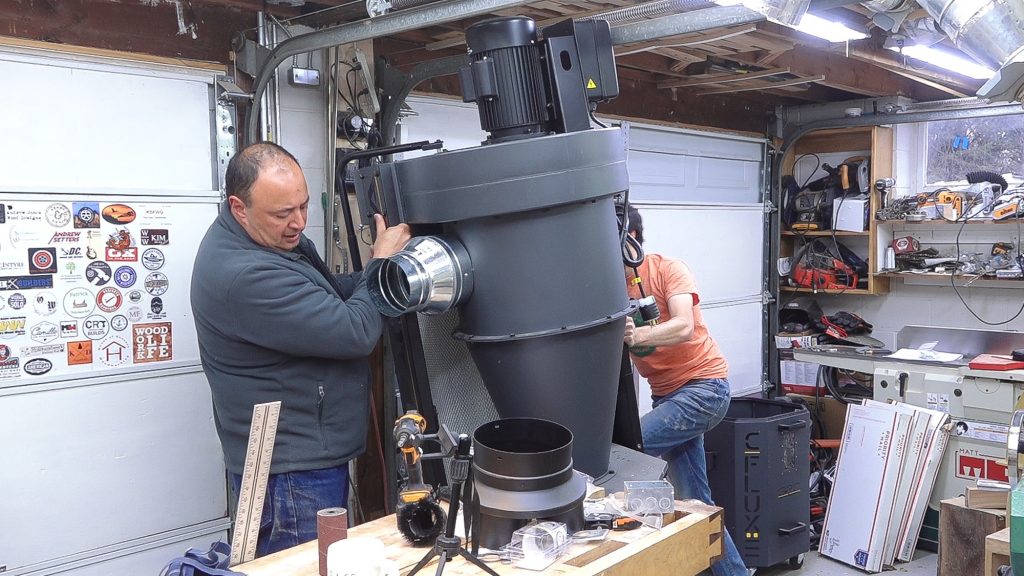 My dad helped me move the cyclone into position.  Since the motor stuck up higher than the garage door rails, it had to be tipped and rolled into place. 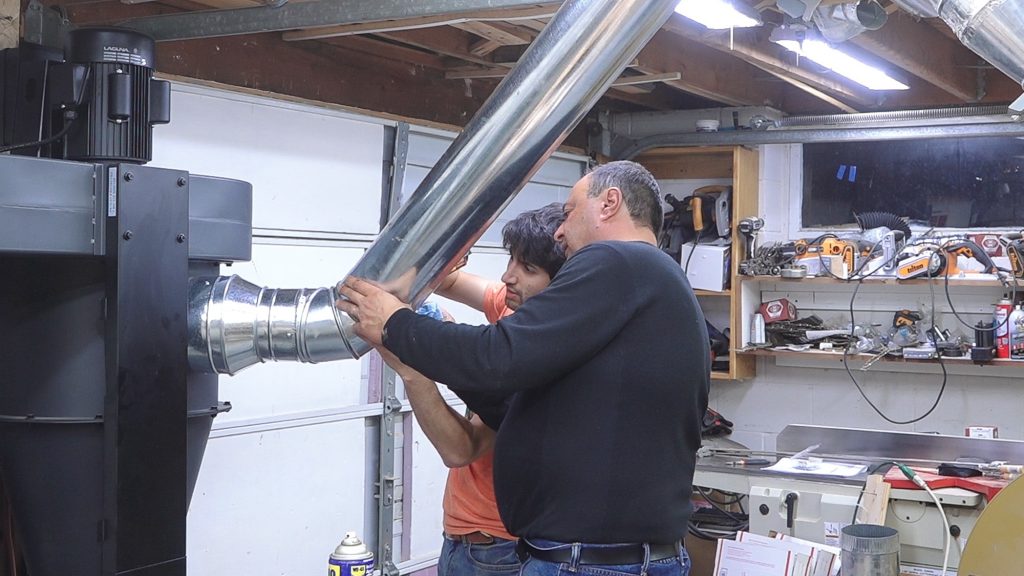 Hooking the cyclone to the existing ducting was pretty easy.  The inlet doesn’t go quite to 90 degrees on this side of the unit, so an adjustable elbow is installed to point the inlet back a bit and upwards to meet the pipe on the ceiling.  I cut down and crimped a piece of straight pipe to connect the cyclone to the pipe in the ceiling.  The joints get screwed together with self tapping sheet metal screws and once I’m done changing some of the other pipe out, I’ll seal the seams with foil tape. 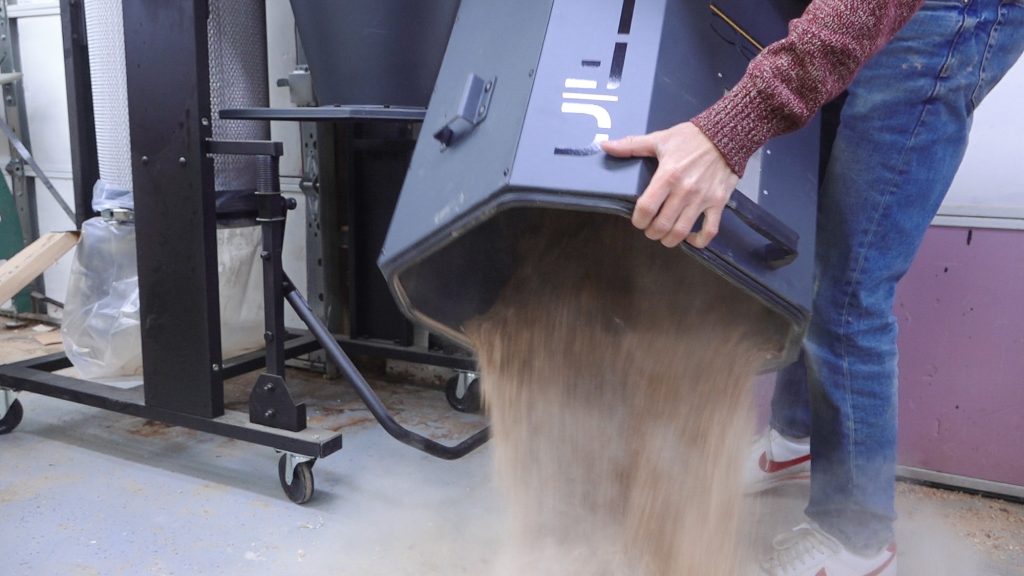 I turned the cyclone on for the first time and could hear stuff rattling through the pipes towards the collector.  The cyclone was already pulling dust through the system that the old collector missed.  I went around and opened each blast gate one at a time and could hear a rush of debris heading down the pipes.  I checked the collection bin afterwards and was shocked at how much stuff there was in there.  The old collector, even at maximum performance, wasn’t able to clear everything out of the tools and pipes. 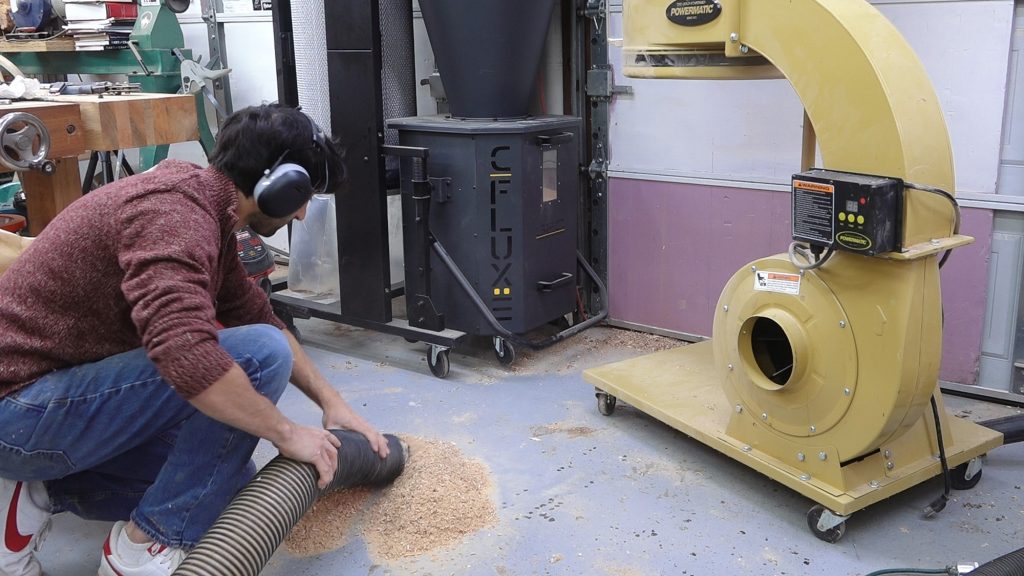 With all this sawdust on the floor, I first wanted to test how easy it would be to overwhelm the cyclone.  In normal cases, the cyclone has to separate a small steady stream of sawdust but when sucking up large masses of debris, huge amounts enter the cyclone all at once and larger quantities don’t get separated out and pass right into the filter.  The results of this were pretty much what I expected.  There was a large amount of debris in the filter bag.  Not really a real world scenario but interesting regardless. 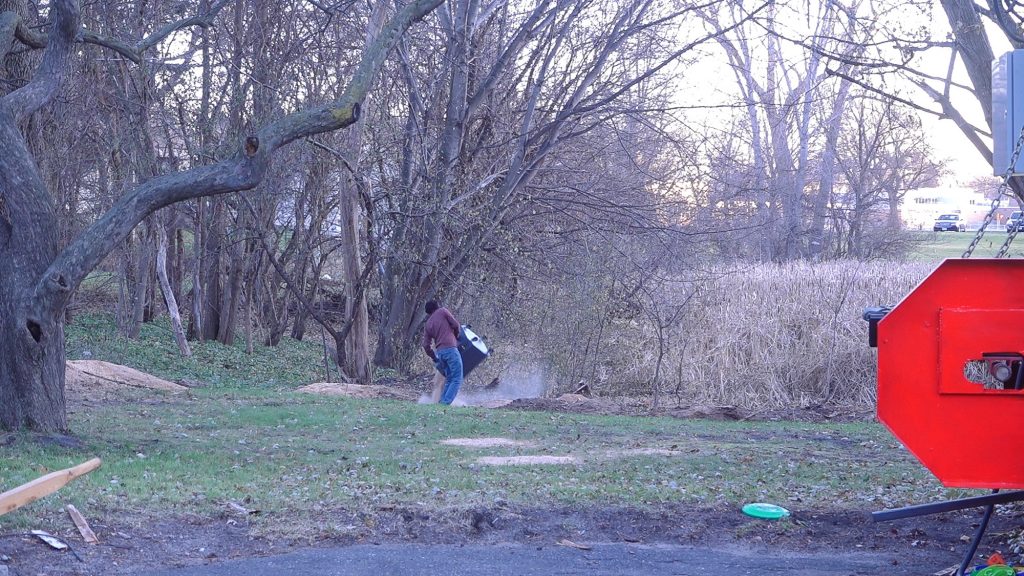 With that test out of the way, I emptied the filter bag into the drum and I could empty it for the first time.  Having a drum on casters is so much better than dealing with a bag of sawdust.  The drum easily drops out of the collector and I can simply wheel the bin across the yard and dump it out.  This was so much easier than trying to carry a heavy bag of sawdust! 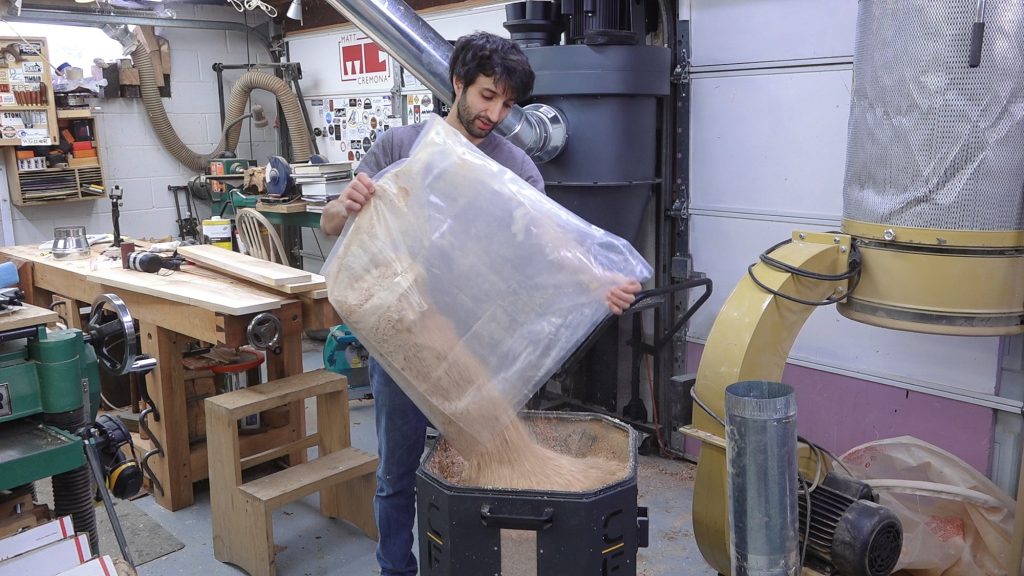 Next I wanted to test the real world separation ability of the cyclone because the biggest disadvantage of a compact cyclone is they are not as good at departing than a full sized tall cyclone (or so I’ve heard).  I milled some boards down to produce one bin of shavings and a lot of stuff made it through the cyclone and into the filter.  Way more than I’d expect.   The one saving factor with this is the flapper in the filter actually works to dislodge the sawdust into the collection bag  The bag can be easily emptied into the bin and it all can be wheeled out of the shop.  Looking at these results, I’ll have to empty the filter bag once for every 5 drums of sawdust I collect. 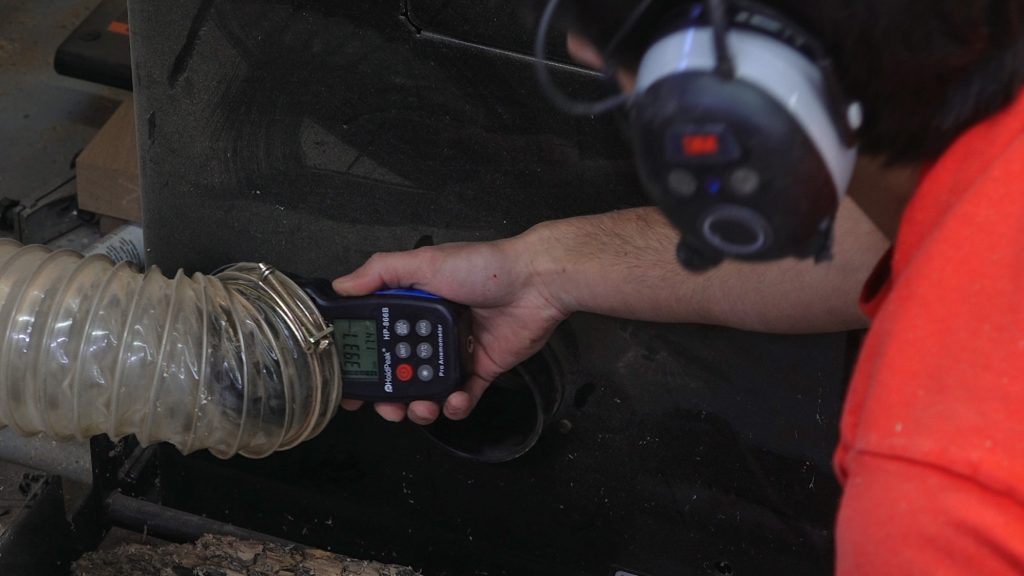 One thing I thought would be interest is to compare the airflow and noise levels of both collectors.  I established a baseline of what I’m typically experiencing and used to by taking measurements with my old collector before changing anything.  I then repeated these reading after cleaning the filter to establish a best case scenario for that collector.  I also took the same readings with the cyclone hooked up to the system. I used an anemometer to measure the airspeed at the planer, table saw, and lathe.  I also tried to get a reading at the collectors’ inlet but the air speed exceeded the range on my meter after cleaning the filter on my old collector.  I also had the issue of the cyclone exceeding the maximum on the meter when I took readings on the planer and table saw.  With the old collector, I placed the meter inside of the hose thinking I would get more consistent results this way.  When I did the same with the cyclone the airspeed was too great so I had to take a reading with the meter just outside of the end of the pipe.  The results should be fine though since this difference is accounted for in the size of the pipe in the calculation. When the meter is inside of the hose, it blocks the airflow so the only path is through the fan area of the meter, which is around 3″.

To calculate the CFM based on the air speed reading is pretty simple.  CFM  = Cross Sectional Area of the Pipe (in sqft) X Air Speed (in ft/min)

In the end, what I’m really interested in with these CFM readings is the change in airflow throughout the various cases.  I highly doubt the actual cfm number is very accurate but since I was testing consistently, the deltas should be accurate.  So the results show that I was used to roughly 50% of the maximum performance of my single stage unit and the new cyclone is moving 4x as much air as I’m used to in my shop.

Noise levels on the cyclone are slightly higher but not by much.  Again, I doubt the actual dB reading is accurate but I’m really only interested in the % difference. 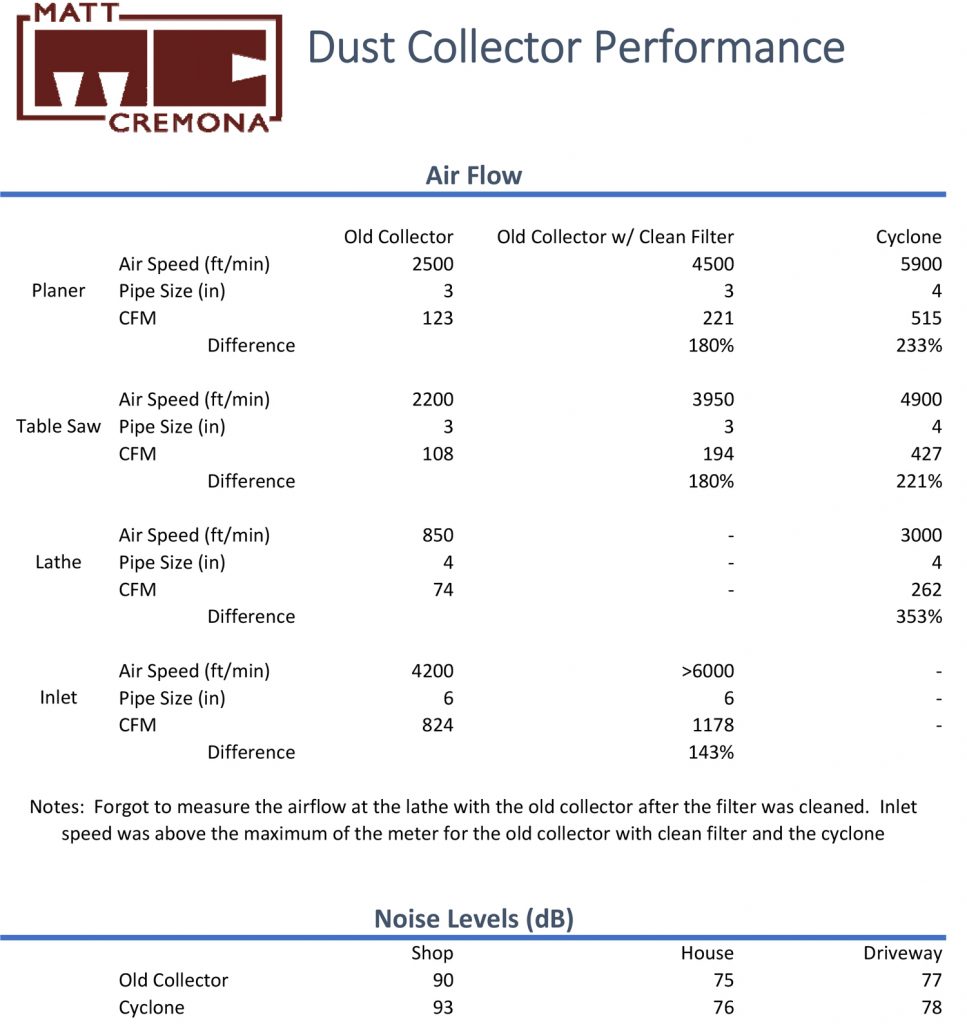 The Excel file for these results is also available.