Making and Installing Hardwood Floors From a Tree

Part of the improvements to our family room included replacing the carpet with hardwood floors.  I decided to use ash for the floor because it’s lighter color would brighten the room, because it is hard, and because I had access to it.  I’ve always wanted to try making my own flooring. 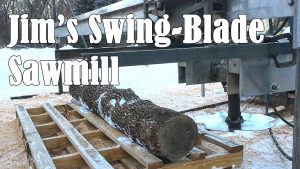 Here’s a shot of that tree after I got it on the ground. And this is the first tree I was talking about beging pulled out of the woods.   In the spring, we pulled another ash tree out of the woods. The log that is second from the right produced my favorite floor boards. Here’s one of the bigger sections of that tree being transported across the field.

Here are a couple of before shots of the room. We wanted to remove the wall paneling , pull up the carpet and possibly replace the trim. We started by removing the wall paneling, taping and mudding all the drywall seams, and painting the walls. A little while later we were ready to tackle the floors. I got a nice surprise when I rolled back the carpet. whoever installed the carpet covered up some pretty bad pet stains that had soaked into the particle board underlayment. I cut away the worst sections to buy me some time before having to pull up the rest of the particle board. With all that removed, I could evaluate the flatness of the subfloor. Carpet will mask a lot of flatness deviations but wood floors, not so much. The subfloor looked a little off so I brought in a straightedge. oh boy. That hump you see is where the I beam that supports the floor joists is. Looking at these joists as they sit in the I beam I could see that the tops of the joists were not flush with the top of the I beam. This was the case for just about every joist in this floor. So using a bottle jack, I jack up each joist until it was level with the top of the beam and placed a shim between the bottom of the joist and the I beam. This solved the dip on the right side but the left side would have to be shimmed. To figure out the size of the shim I needed, I laid my straightedge over the joist, measured the rise and then measured the run, in other words the distance from the wall to the point where the straight edge starts contacting the floor. I could then lay that out on a piece of 2x and cut the shim with my track saw. Most of these ended up being about 1″ over 52″. I could then lay down some 3/4 t&g osb over the entire floor. I needed to use an underlayment here so the finished floor height of this room would in line with the kitchen floor. I also added some dominos to the ends of the osb that didn’t have a t & g joint.

After I had most of the room prep done, I moved the pile of lumber into the room to finish drying and to make more room in the basement for drying other stuff. I figured the fastest and easiest way to get the boards down to the shop would be out the window. We made two piles, one for the boards that were ready to be processed – they had a clean edge and weren’t much wider than the final width and a second pile with the boards that needed some work first. these were the wider boards that would need to be ripped down first and ones with two live edges. The first step in the milling was to run an edge of each board over the jointer so I had a nice straight edge to work off of. For all the ripping, I moved the bandsaw out into the driveway so we didn’t have to try to maneuver these long boards through my shop. In this shot you can see some of example of the boards that needed a little work before being ready to go. Now I’ll rip all the boards to a rough width of 6″. As I was ripping, I set any sizeable offcut aside. I made some narrower strips out of these that I could mix into the floor. Next I started planing the boards down. I planed all the boards to a final thickness of 3/4″ and on the last pass, I chose the show face of the board and made a mark to indicate the bottom of the board. It took about 7 hours to plane all the boards. After all the planing, I put the boards back in the house and called it a day. The next day I worked on this project, I started by squaring up one edge at the jointer. Dema was kind enough to help me with the milling for a few hours on this really hot day. Next we took all the boards and ripped them to their final width. The main pieces were ripped to 5 3/4″ and I also managed to make some narrower ones that were 5 1/2, 4″, and 3″ wide out of the offcuts. Now with all the floor boards milled into blanks, we could start the tongue and groove. I used the tablesaw with a dado blade to cut both the tongue and the groove. To keep the groove centered, we turned the boards end for end and ran them through a second time.   I made this groove a 1/4″ wide and 5/16″ deep.   Now for the top half of the tongue. I have the blade raised to remove 1/4″ of material here and I’m running the boards vertically which should give a more consistent thickness tongue due to the feather boards than if I ran the boards flat on the table. This is because most of these boards are not flat, they have some bow and the feather boards flatten them out. Next we ran the bottom of the tongue. For this cut I raised the blade a bit so when the tongue fits into the groove only the top section contacts the top of the mating groove. And now the last step in the milling process: creating the relief cuts on the bottom.

Before getting started, I went over the entire floor with a rag dampened with mineral spirits to clean up any remaining dust and debris. To contain the fumes, I hung a sheet of plastic in the doorway to the room taping all the way around it with duct tapeThe finish I chose to use is a two coat flooring finish system from Glitsa. This type of finish is known as a swedish finish or an acid cure finish. It is an extremely durable finish but on the downside has some really crazy fumes.   This doorway is the only place where air from this room and the rest of the house can freely mix since this room is not on the hvac system. This sheet of plastic did a great job of containing the fumes. Time to apply the finish. I chose to use a roller as my applicator and used some tape to make sure there wasn’t any loose material on the roller. The first coat of this finish system is a seal coat. This product has a hardener that gets mixed into it to activate it. I started applying the sealer by first cutting in the edges with a brush and then applying the finish to the field with the roller. **Something about finish bringing it to life** I worked my way back to the door and I had just enough finish to cover the floor. I shut the door and allowed it to dry for a few hours and then came back and opened the windows and door to allow the fumes to escape. A few days later I was ready to apply the second coat. I gave the floor a light sanding and wiped up the dust with lacquer thinner and then I was ready for the top coat. I applied this the same way as I did the sealer: cut in with a brush and used a roller to cover the field working back to the door. Again, I had the windows and door closed to keep the dust out until the finish had dried a few hours later.