Welcome back to our home renovation and remodel project. It’s been a little while. For us, we’ve been off for about nine weeks now. We did a few things back in December, but it is January 24th now, and we’re ready to get back into the project. It’s exciting and also a little scary because there’s a lot more work that has to happen. 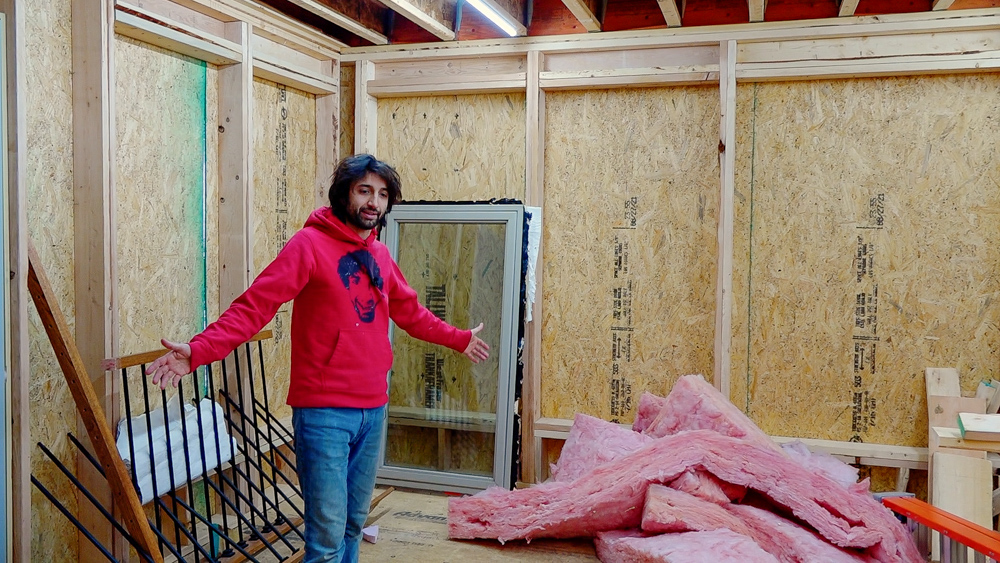 To catch you up with what we did previously, back in October, in parts 2-12, we built the shell of the sunroom, and now it’s a space that’s ready for some windows and finishes later on. 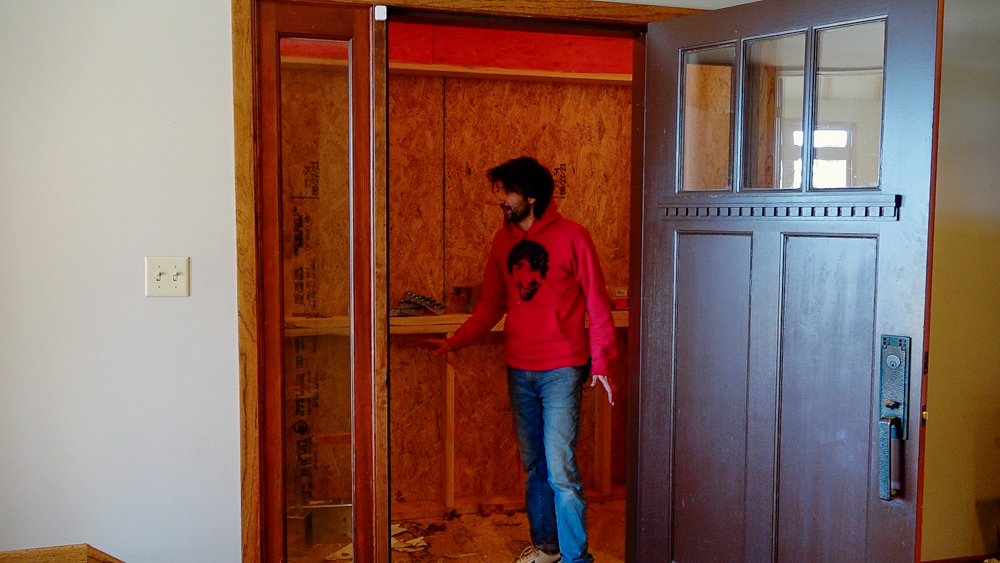 In parts 13-14, we added this small addition on the front of the house. This is where the future kitchen sink is going to go, and we’re going to move the front door somewhere else. 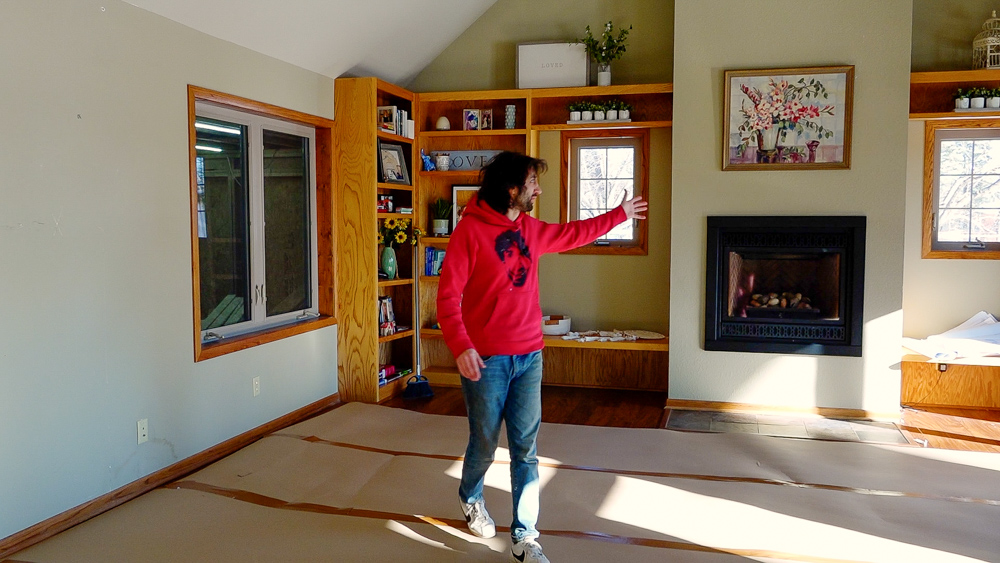 We have a few things going on in the great room as well. First off, as you can see, we have some bookshelves and some smaller windows here on this east wall. We’re going to be replacing these small windows and removing the bookshelves. 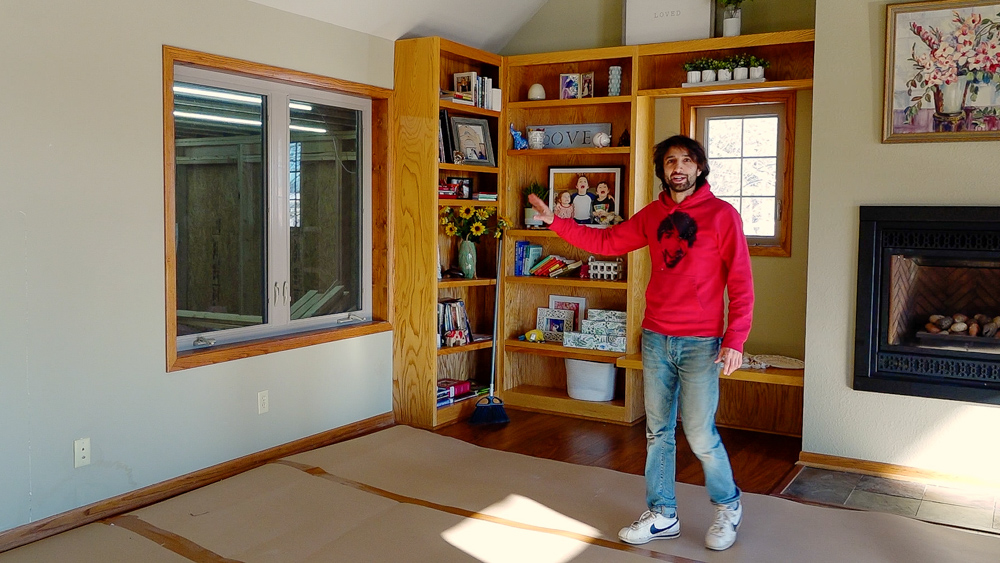 We’ll be taking this window here and moving it into one of these two openings where the small windows are now. Then we have another one that matches that window, which will go in there as well. That’ll let a lot more light in here and allow us to see more of the property in that direction. 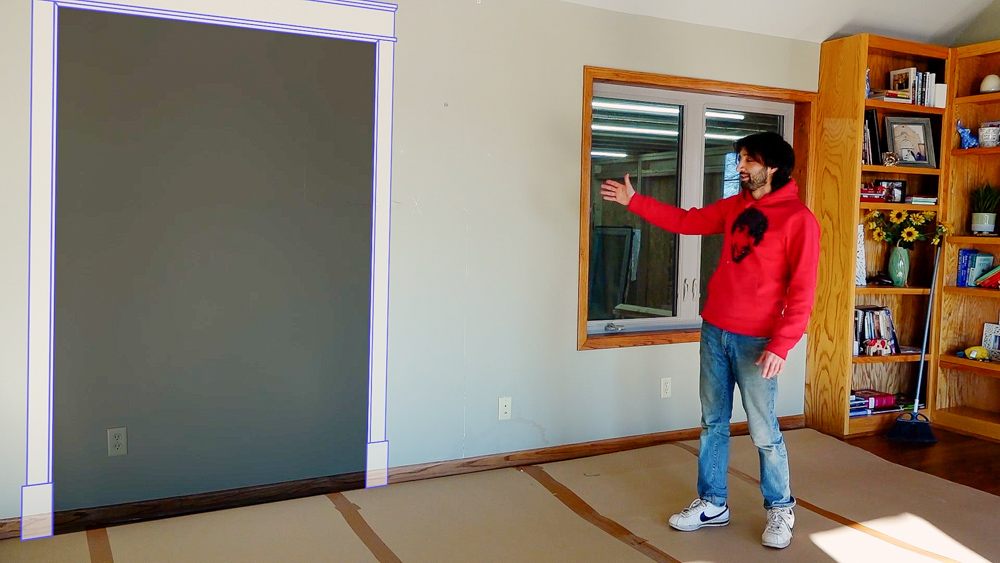 We will have a new entryway into this room, which will replace the current one. That’s really going to help unify the great room with the kitchen and the sunroom area, and make this more of a cohesive space instead of the great room being its own separate thing, like it is right now. 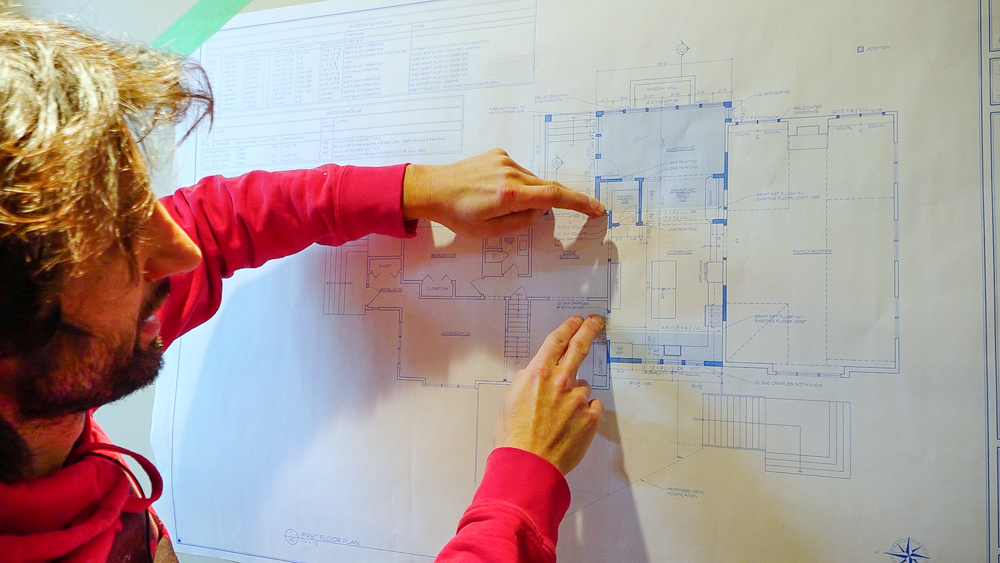 To give a little more context, let’s take a look at the plans. You can see the current entryway is separated up by the current exterior walls, which are right here. There is the larger back addition we did in the fall and there is a smaller front addition we did in the fall. Knocking down the former exterior walls allows us to create one really long area here and have a nice unified area between the kitchen and sunroom area. We’re also gaining a pantry, and we’re going to add a little breakfast nook area. 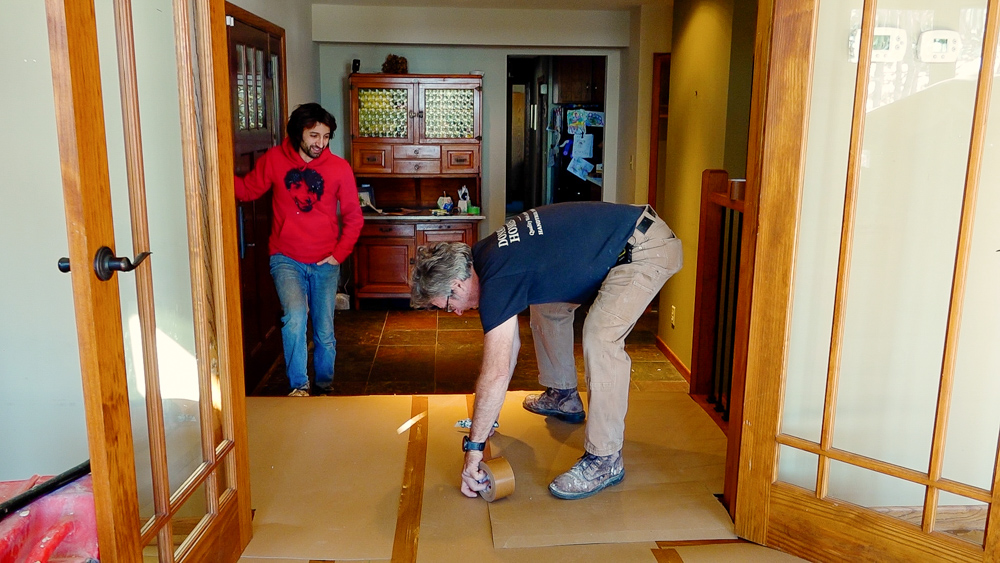 Donavan’s here covering up the floor to hopefully preserve some of this, because the floor in the great room is staying, but this is going to be our pathway to remove all of the demolition debris. 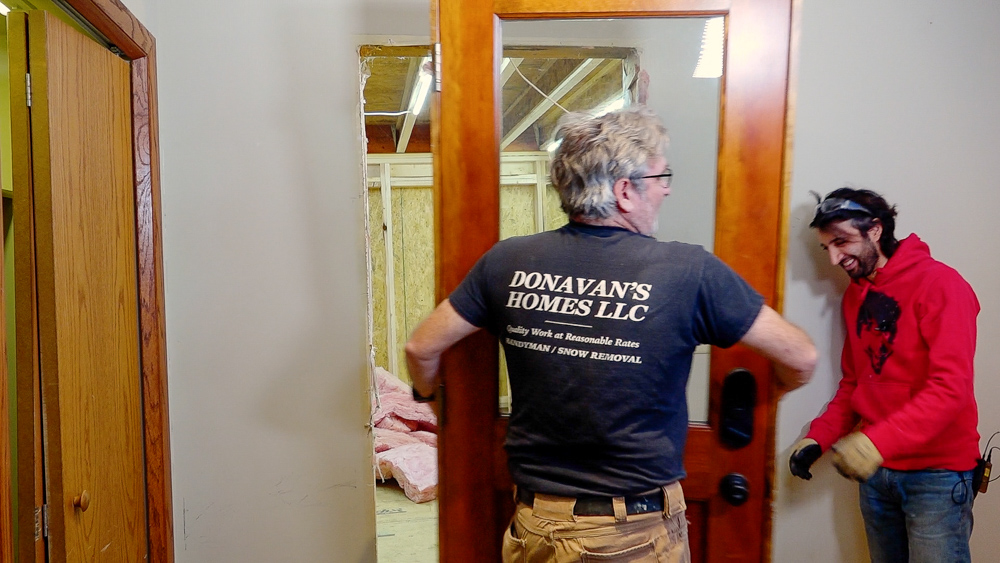 In the interest of keeping the rest of the house clean, we’re going to relocate the back door and seal off this section of the house. Then we will tear all the sheet rock out of here, expose the framing, get rid of the dividing wall in the entryway, get rid of the duct work, and then we can kind of assess where we’re at from there. Should be an interesting week. 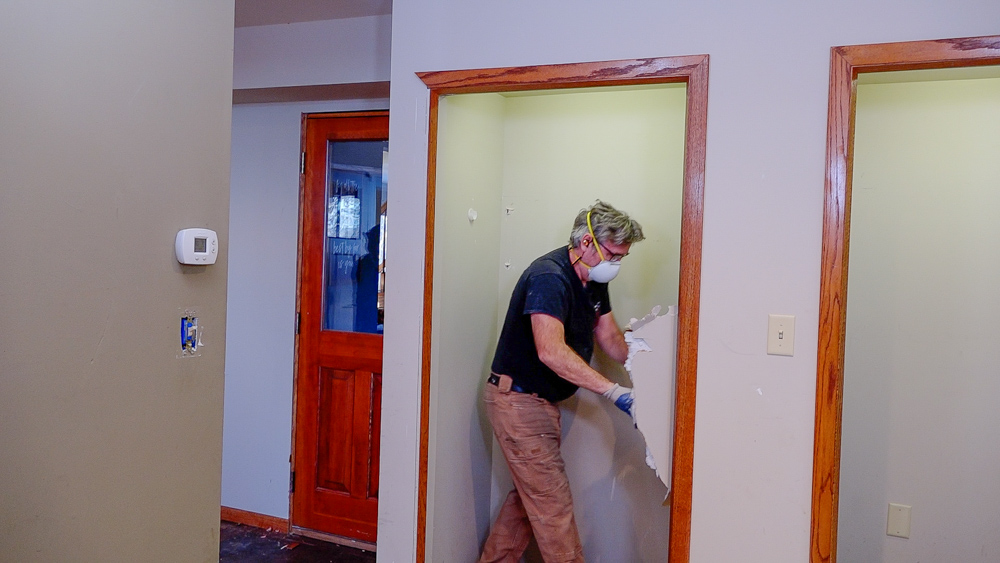 We’re going to tear out the closet area first. 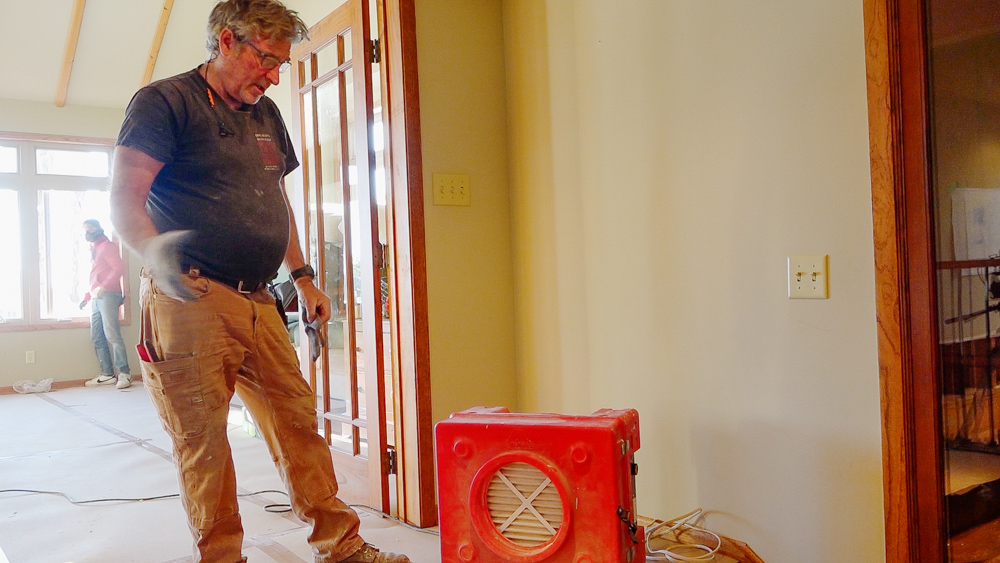 Because we’re creating dust in here, we’ve got a negative air machine or an air scrubber. It’s a two-filter system that has a filter that’s similar to what you have in your furnace, and then behind that, it has a HEPA filter. It scrubs the air, takes all the particles out of the air, and then recirculates it back into the house. On some houses, we’ll actually vent it outside to create a negative pressure through the rest of the house. We’re sealed up well enough in here and it’s almost zero degrees Fahrenheit outside, so we don’t want to do that. So we’ll get that going now and keep the air cleaner. 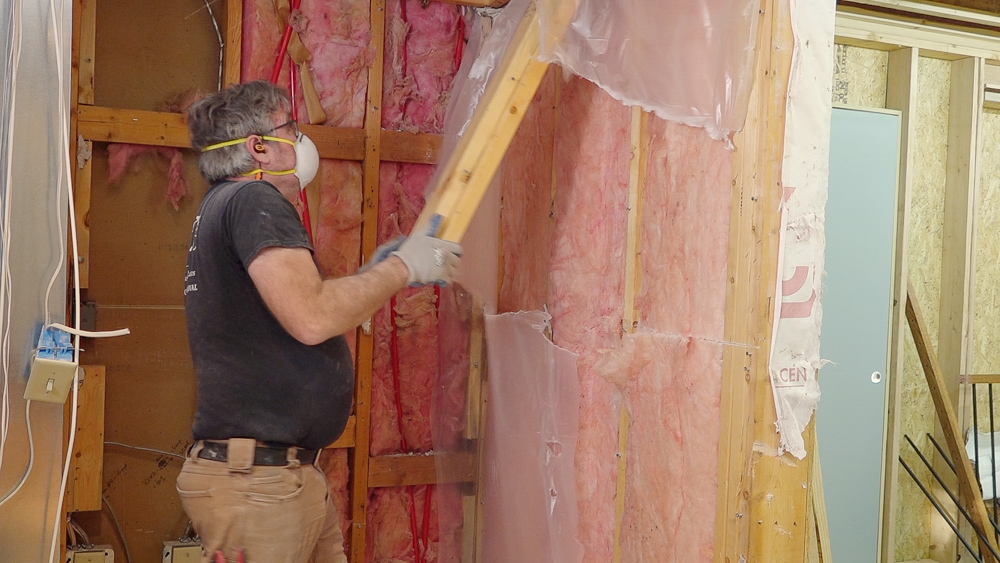 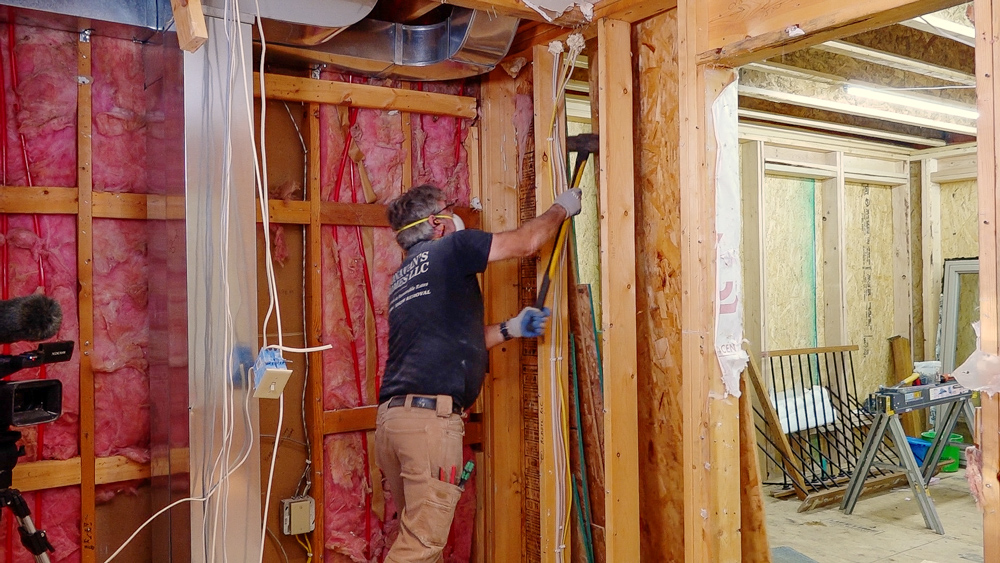 Next up, we are stripping down the east wall, which used to be an exterior wall. 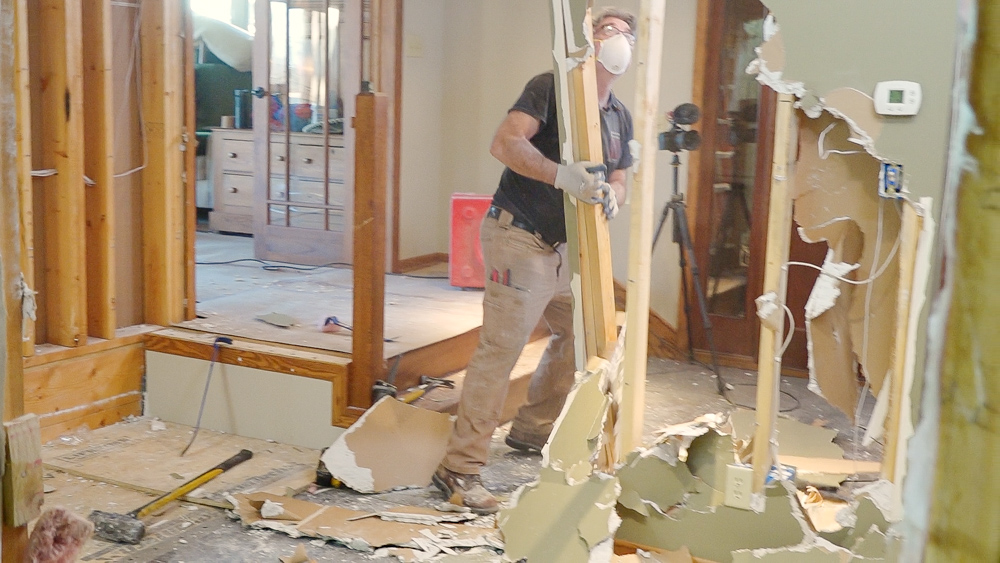 Then we (Donavan) are taking down the divider wall. 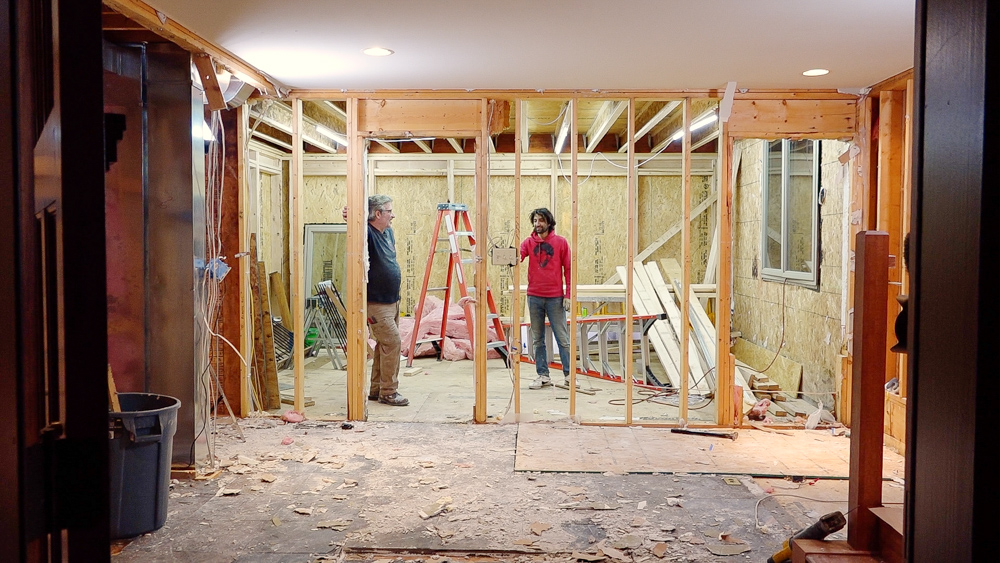 Ta-da! It’s a lot bigger. About double the size. This is going to be a nice big space. It’ll be divided up into the kitchen, the breakfast nook, pantry, and the sunroom back here. But they’ll be all pretty connected.

Took us three hours to get to this state, and one trailer full of debris. Tomorrow we’re going to be finishing up here, but we’re also going to have HVAC here tomorrow, so we might not get through everything. It’ll be exciting to get the HVAC done and not have to worry about that ductwork in the middle of the hallway.

So that’s going to do it for this one. Thank you, as always, for watching. I really appreciate it. If you have any questions or comments on this demolition or anything on the home addition or remodel, Donavan’s been answering questions lately, so you can ask him some questions and he’ll probably answer you. Until next time, happy destructive woodworking!