From time to time, I like to make boxes since it helps me exercise my design skills.  This one started with the idea of filling the gap produced by hinges that are meant to hang doors and things evolved from there.  I selected some materials that I felt would work together, came up with some joinery ideas, and spent some time in the shop exploring the ideas in my head.  This is always a great exercise.  This box in particular is sized to be a valet box – somewhere to put your things at the end of the day (keys, watch, wallet, etc). 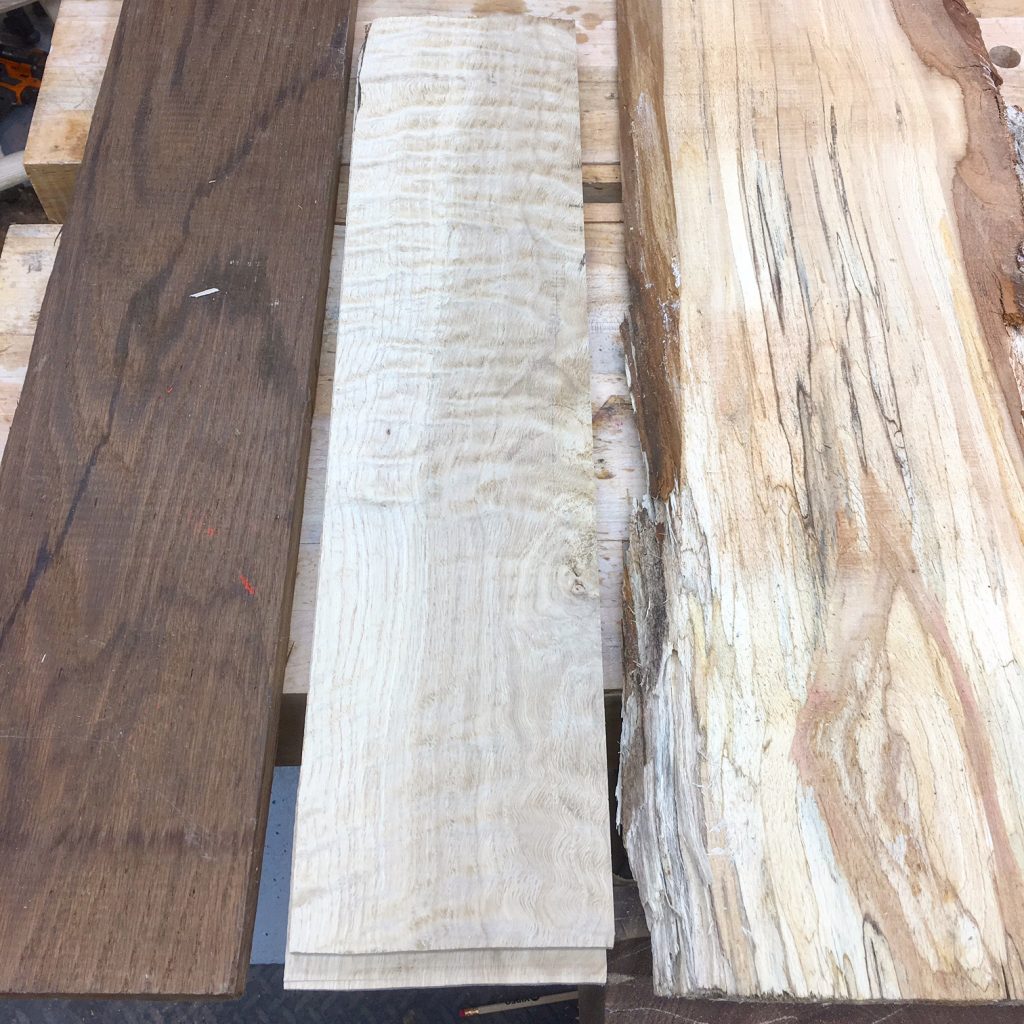 The materials: Thermally modified ash, curly white oak, and spalted birch.  I’ve had that piece of ash for over a year but didn’t have a good project to use it on.  I was quite curious how the modification process would affect the workability of the material.  The thermal modification process is something I’d like to learn more about.  As I understand it now (at a high level), the wood is baked in an oven without oxygen.  This allows the wood to be heated to a temperature about it’s combustion point.  This cooks the wood fibers and makes the wood much more stable in that humidity changes don’t have much effect on it.  It also becomes more rot and insect resistant and of course, make it a much darker color. 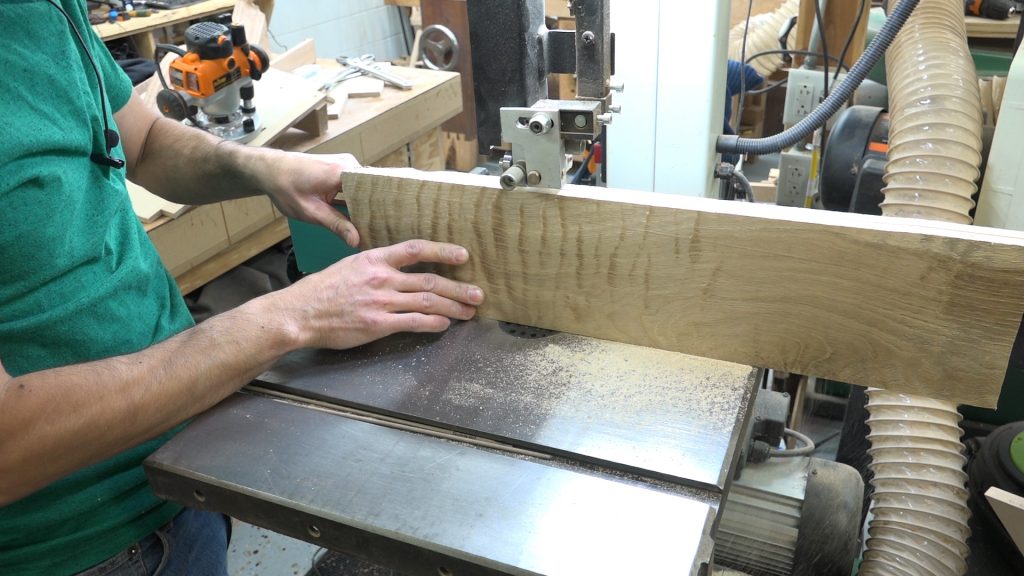 The white oak will be used for the body of the box.  I cut a section to length, milled it flat and resawed it. 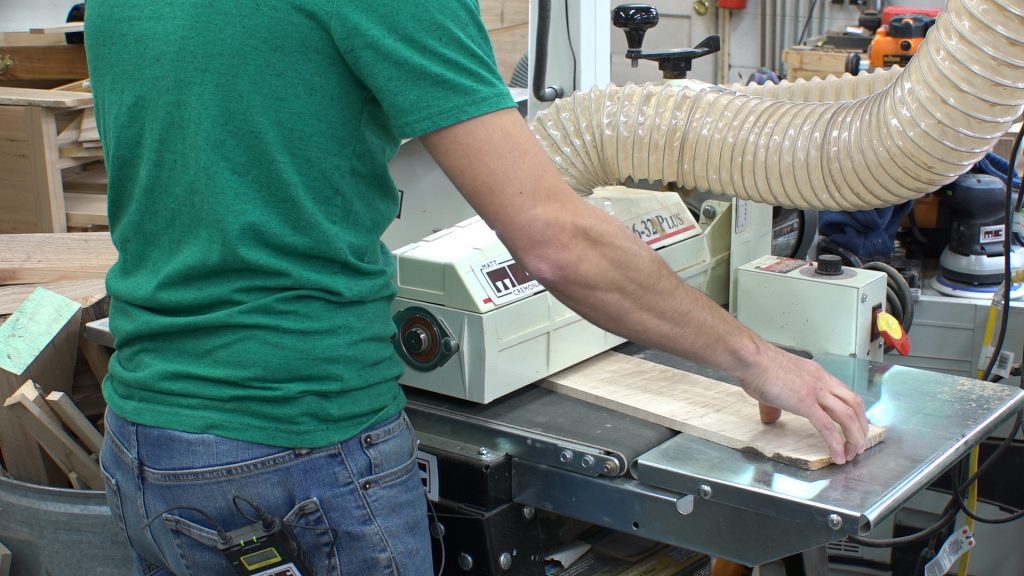 I let the material sit over night to destress and remilled it the next day.  There wasn’t much stress in this white oak so the boards didn’t move out of flat very much.  For the final thicknessing, I used the drum sander since this material was a bit brittle and with the curl, tore out pretty easily. 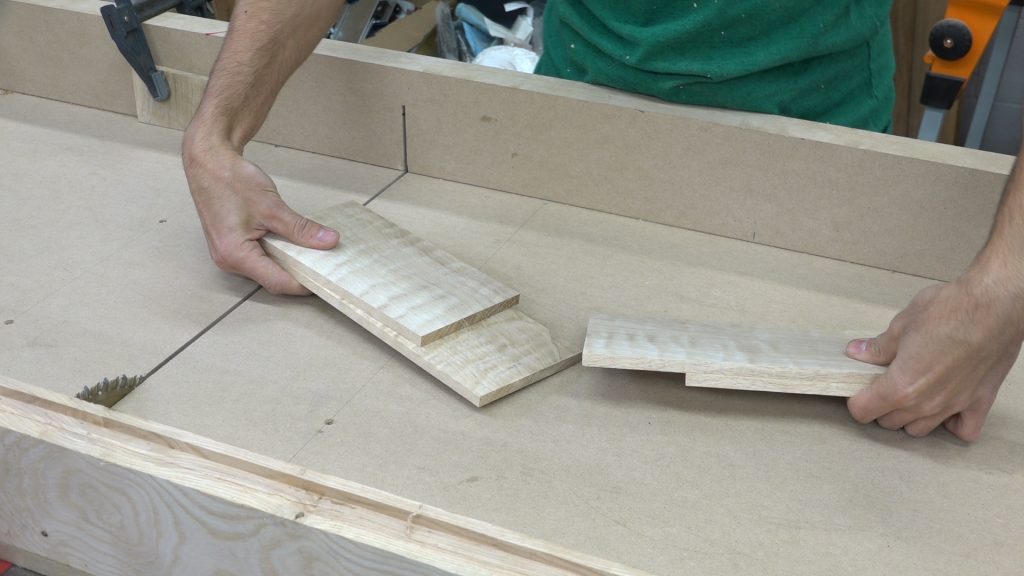 Although it won’t be too noticable with the joinery I’m going to use, I still wanted to go for a continuous grain around all 4 corners of the box.  The bookmatched faces can be flipped to the outside and a short side and a long side can be cut from each board.  The important thing is to cut from opposite directions on each board.  So if a short side is on the left on the first board, the short side will be on the right on the second board. 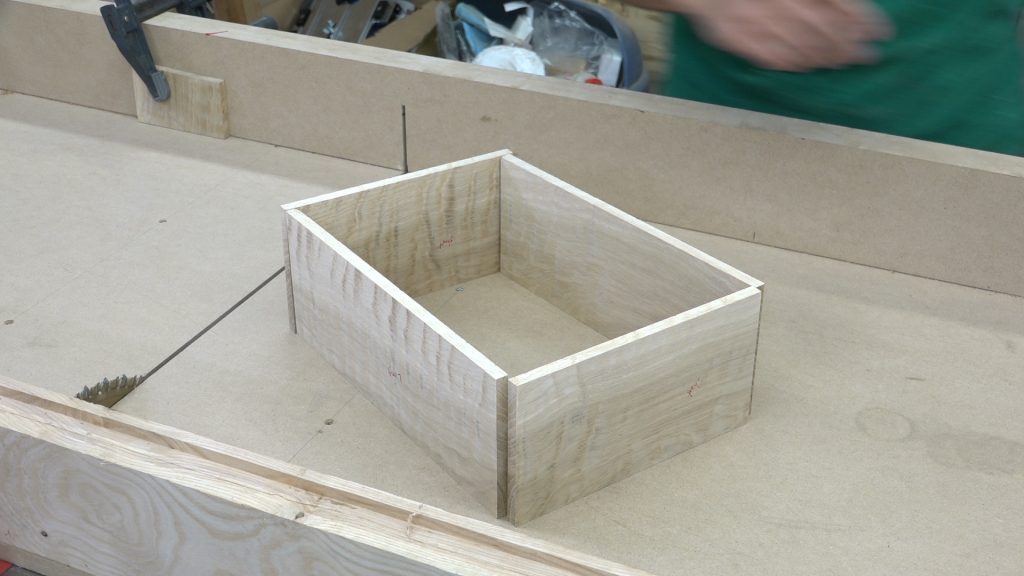 Now when you put the cut ends back together and stack the boards back together, you can fold open a box and the grain pattern will continue across each of the 4 corners. 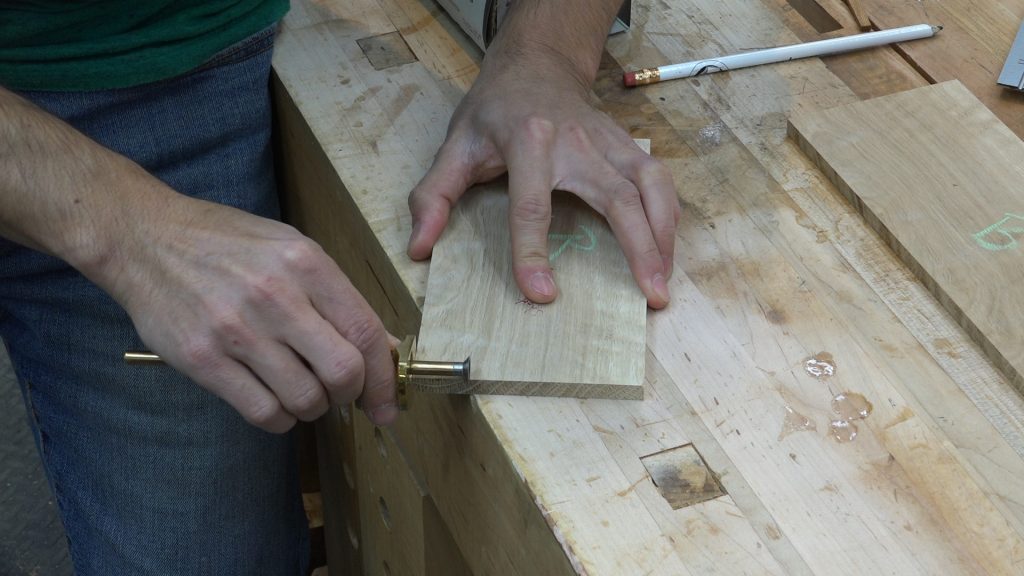 The joinery I’m using is a simple box joint.  With an evenly sized fingers for the box body and a slightly narrower finger for the lid.  I laid out the cut lines with a marking gauge and I’ll make all the cuts with the crosscut sled at the table saw. 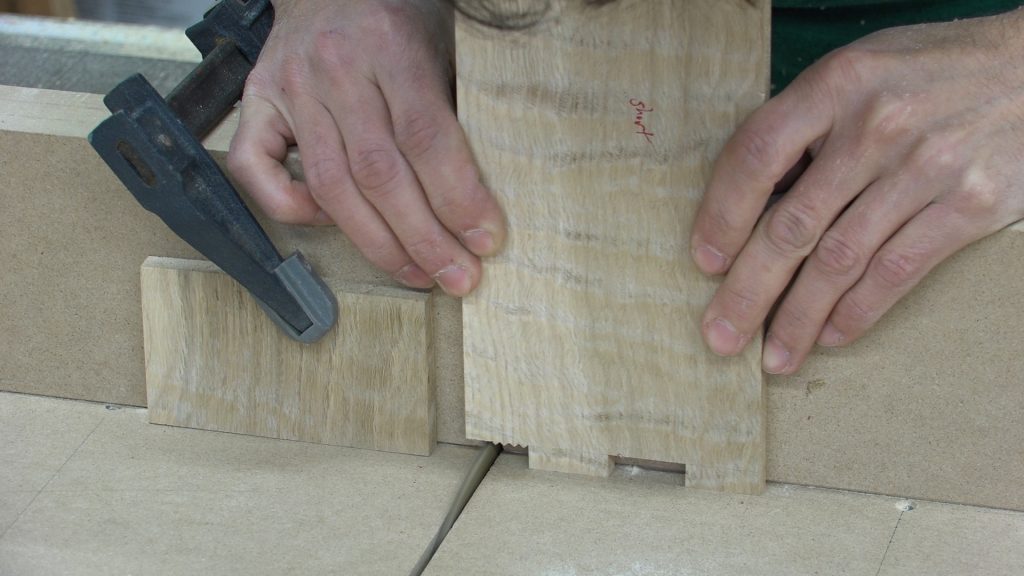 Using the lines I made with the marking gauge, I set a stop block so the blade cut to either the right or left side of the line.  I also used an offcut to test the cuts to make sure they were in the correct spot and that they lined up correctly to the mating parts.  The blade I have in the saw is an alternating top bevel (ATB) which leaves a pointed cut.  That can be removed by sliding the board back and forth over the blade to create a flat cut. 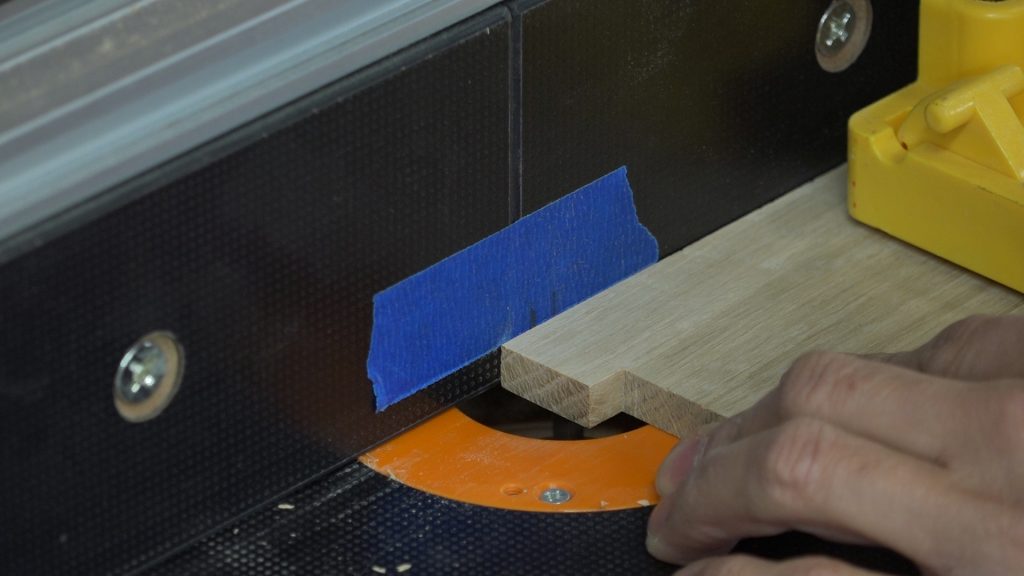 At the router table, the grooves for the top and bottom panels can be cut.  Each piece will have a through groove on one edge and a stopped groove on the other.  I marked on my fence where the end points of the bit are so I could route the stopped grooves to around 1/8″ of the end of the board. 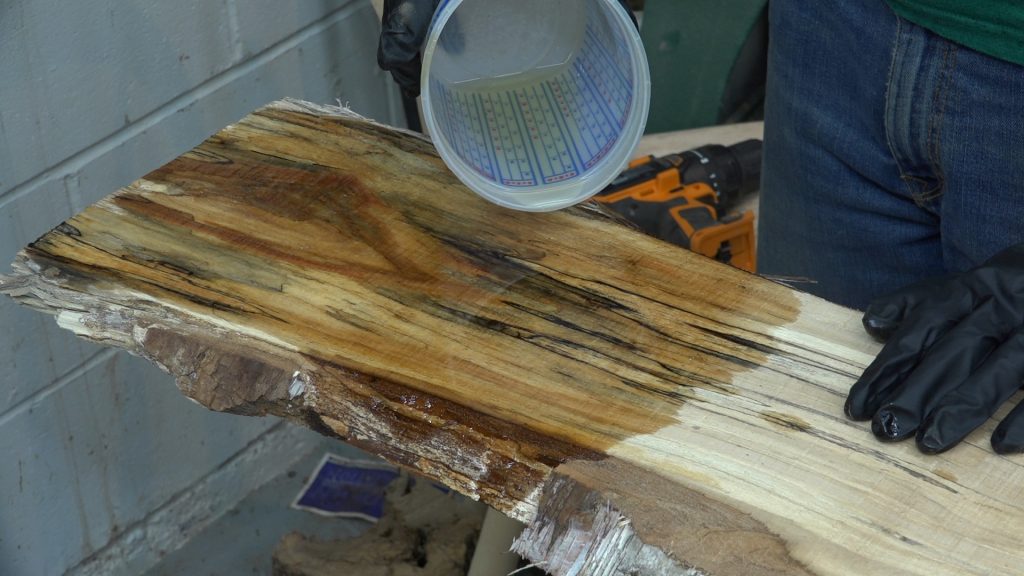 The birch I wanted to use for this project had some beautiful coloring and spalting but was a little past the point of light spalting and more into the realm of rotten.  To bring those mushy fibers back into usable wood, I applied a clear penetrating epoxy sealer (CPES).  CPES is a very thin epoxy that gets readily absorbed deep into the wood and hardens.  I used around 16oz to stabilize this section of wood applying the product liberally to each side, allowing it to fully soak in. 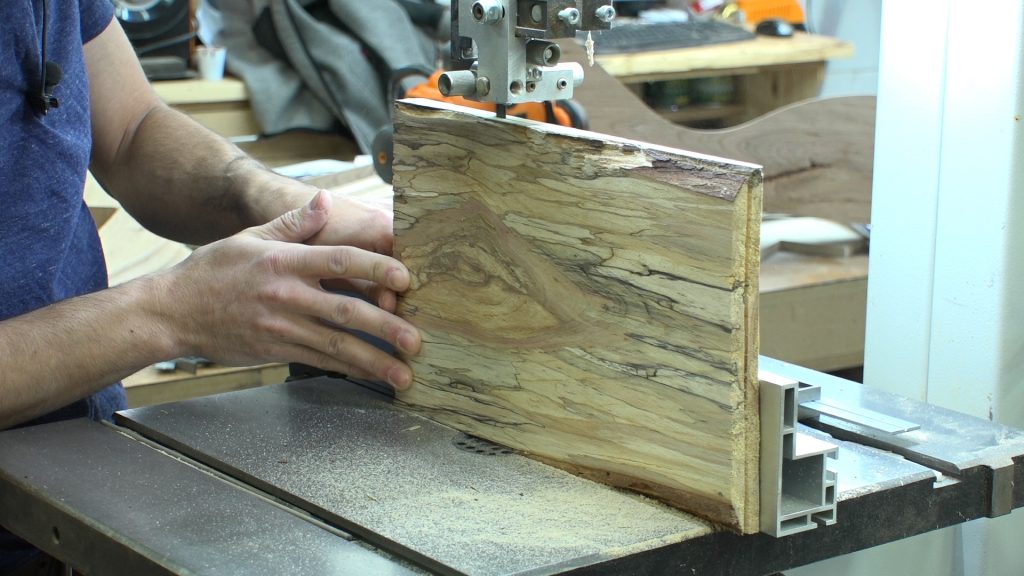 Once the resin had cured.  The birch can be cut to rough length, the live edges removed, and the panel can be resawn into two thinner boards. 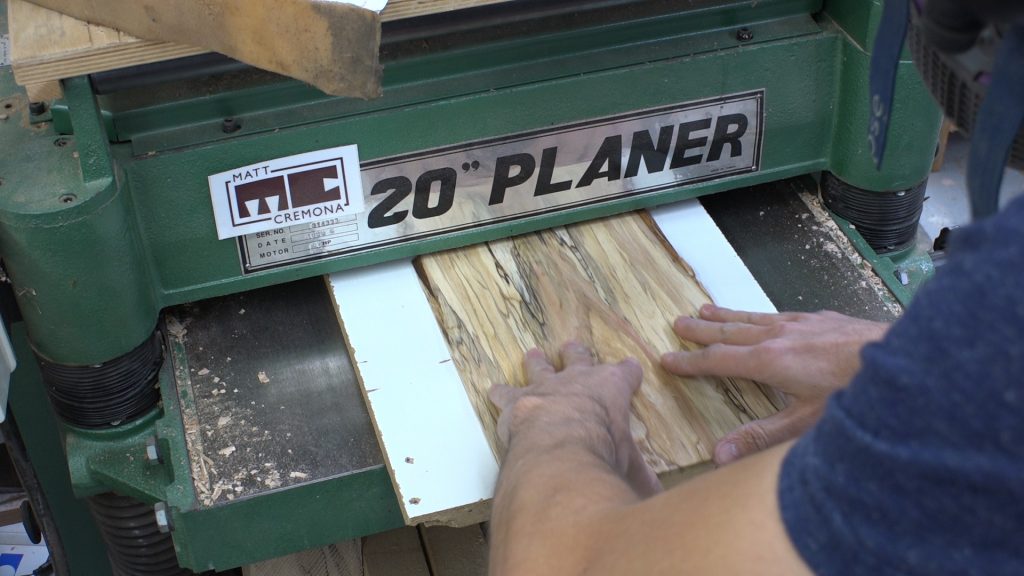 The panel stock can be brought down to the right thickness to fit into the grooves and then cut to length and width. 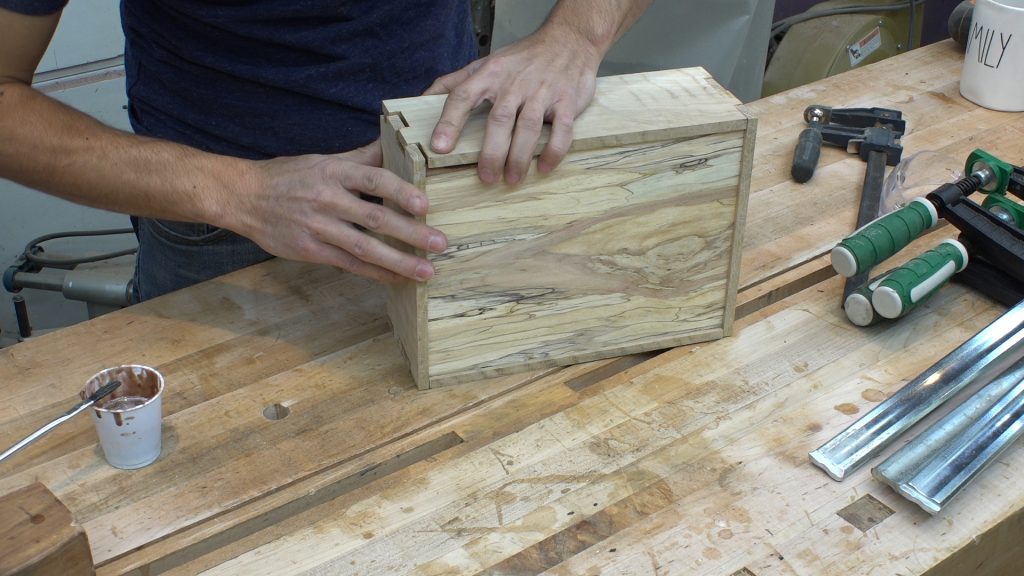 The inside of the box and the panels get finish sanded and then the box can be glued up.  I used epoxy for the glue up which will give me as much working time as I could possibly need and if there is any squeeze out on the inside, the epoxy won’t interfere much with the finish. 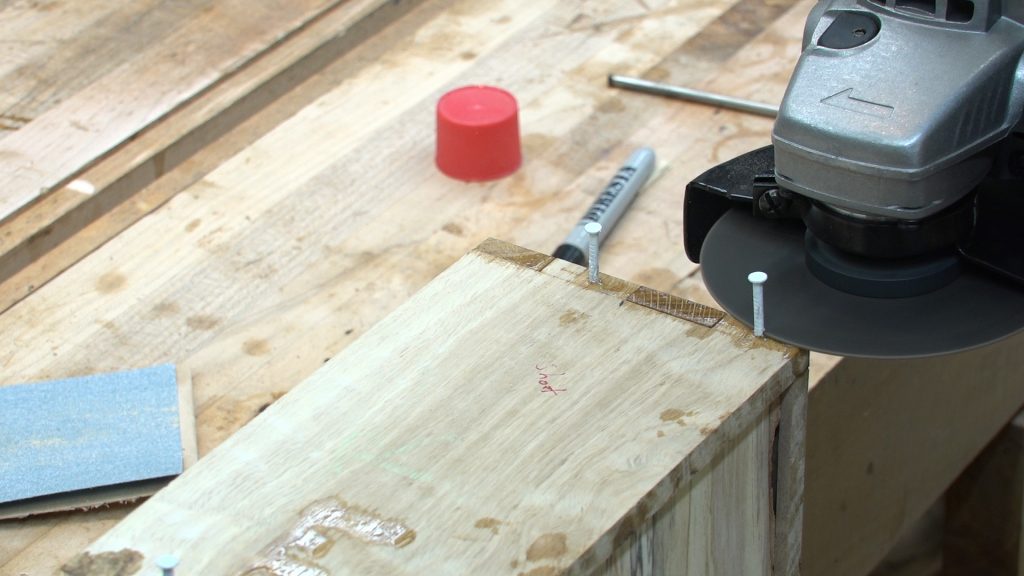 One of the design elements that I thought would be cool would be to pin the box joints.  I was thinking of using stainless steel because I thought the silver would look good with the white oak.  The stainless rod I had was a bit larger diameter than I wanted so I used some aluminum siding nails instead.  The aluminum would have the same color that I was after and have the added benefit of being easier to flush up since it is much softer.  I drilled holes through each joint and epoxyed a nail in place. 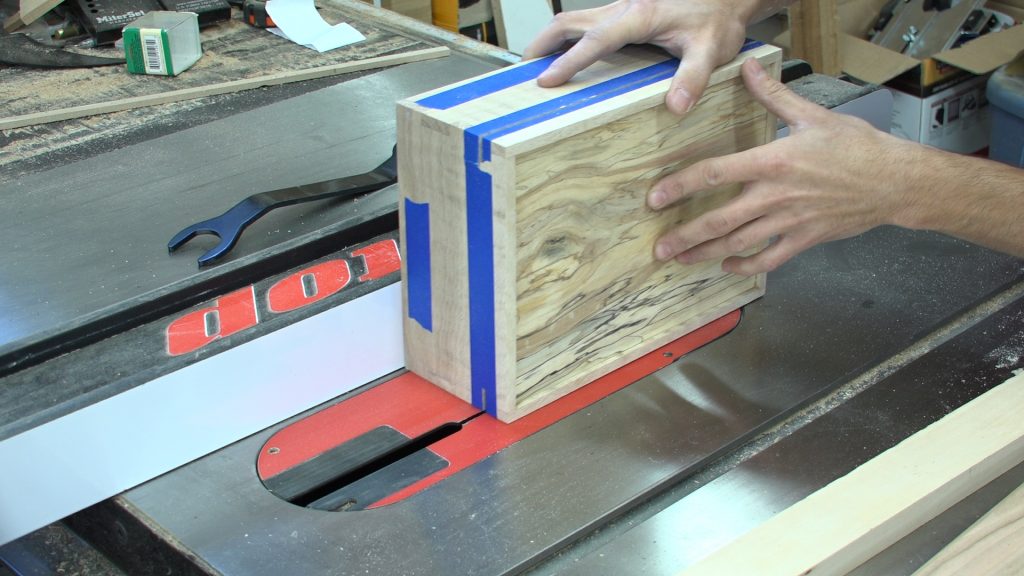 Once the epoxy cured, I cut the nails flush and cleaned up the outside of the box.  Next was cutting the lid off of the box which I did at the table saw.  I wrapped the cut line in blue tape to reduce tearout since I was using a thin kerf blade and didn’t have a zero clearance insert for it.  I added a strip of tape on the other side to balance the tape out so the cut would remain square. 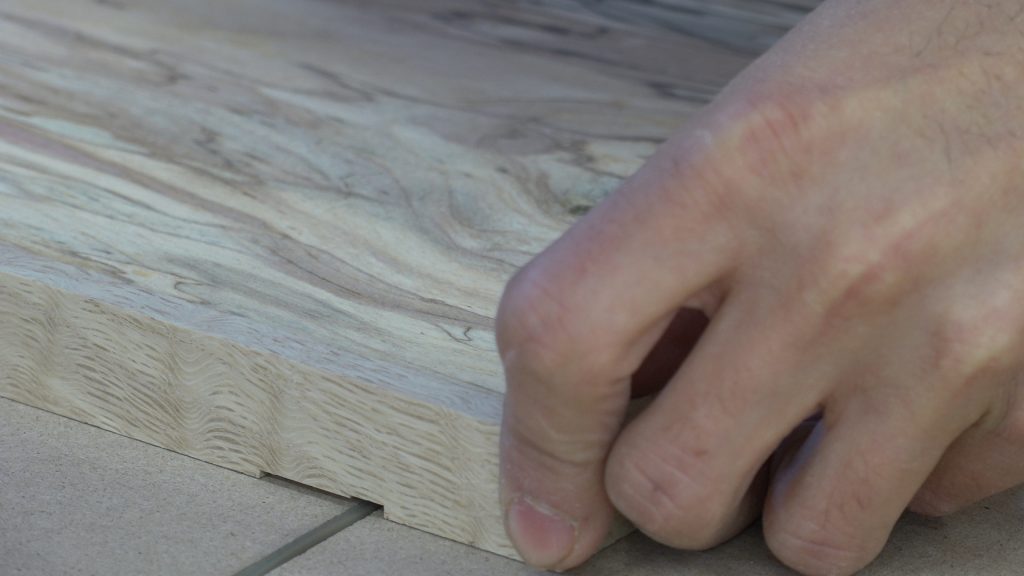 After a little bit of clean up after sawing off the lid, I could start mounting the hinges.  I marked their location with a knife and used the crosscut sled to make the majority of the mortise.  Back at the bench, all I had to do was chisel the mortise to final width. 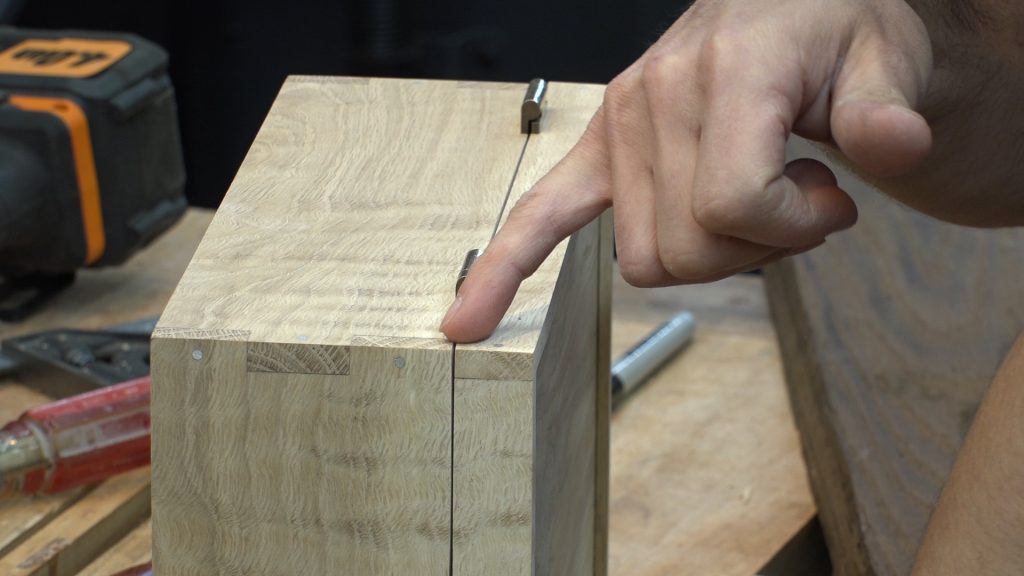 The hinges I used are made to hang doors so they produce a gap when mounted flush.  Filling the gap with an accent wood was the starting point of inspiration for this project. 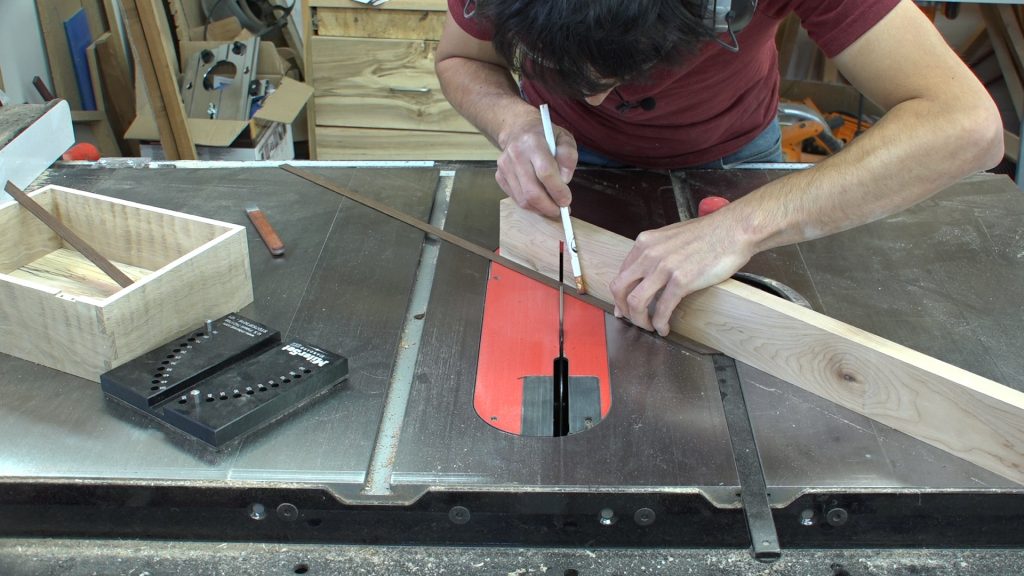 I cut a strip of the thermally modified ash that was the right thickness to fill the gap and cut mitered pieces to fit around the top edge of the box body. 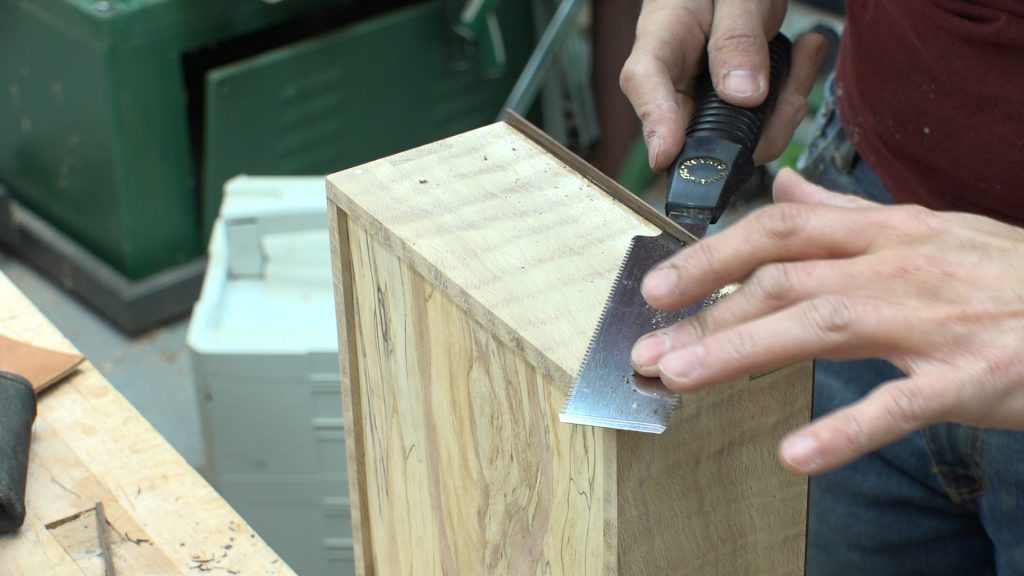 I flushed up the banding with a flush trim pull saw on the push stroke.  The ash is very brittle and the teeth on the saw were a little too aggressive for it to cut smoothly.  A little sanding cleaned things up and broke the edges. 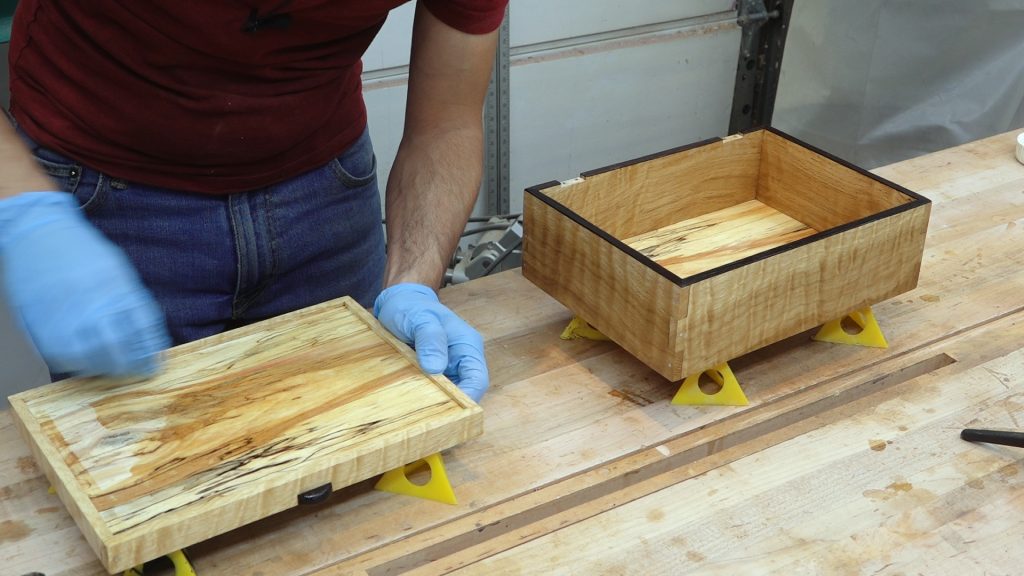 For a really close to the wood feel, I applied two coats of Arm-r-Seal.  Sanded between coats with 600 grit paper and gave the box a light sanding with 1000 grit after the last coat to really smooth things out.

Overall, I am really thrilled with how this turned out.  This was a great exercise in design and there are definitely different directions someone could go with this design.  Different joinery, a different take on the metal pins, and different woods could change the entire look even if the rest of the details stay the same. 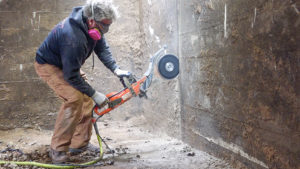 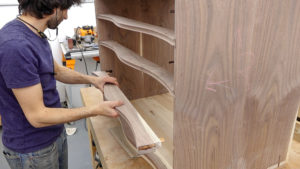