Today we’re going to be heading out and doing a log recovery. I’m pretty excited because this is the first real “adventure” pick up that I’ve done this year. I have picked up two other logs this year, but they were just sitting in a parking lot, so that’s not all that exciting. This time we’re going to go out and do a little cutting and maybe some interesting loading, which should be more exciting. 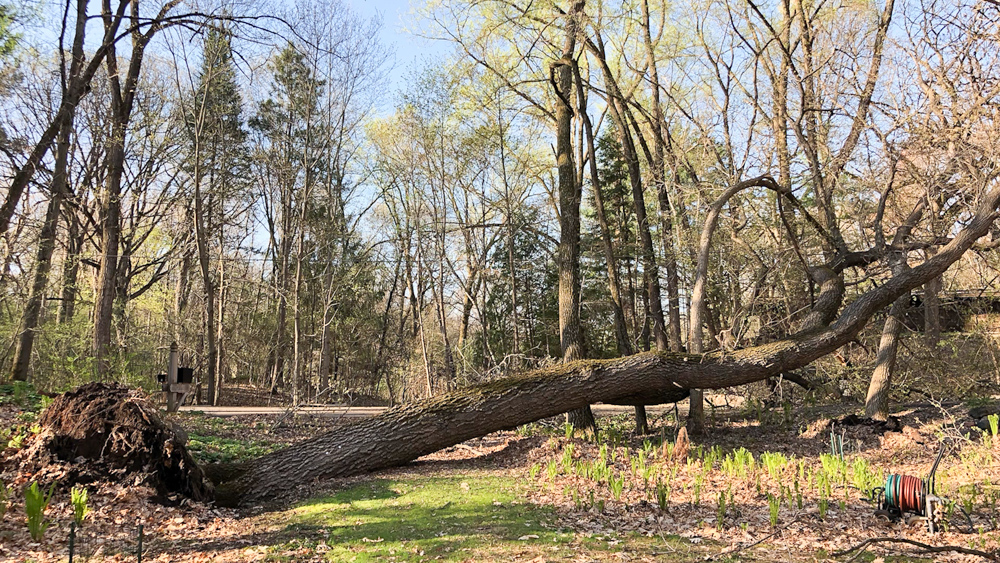 The log is a red oak tree that was either blown over or fell over. Either way, it’s uprooted in a viewer’s front yard. He reached out to me and asked if I was interested in it. So we’re going to go over there and see what we’re getting into. In the pictures, it looks like it’s probably three feet in diameter towards the base, but we will be doing some cutting since it is uprooted, so I am loading up the chainsaws. 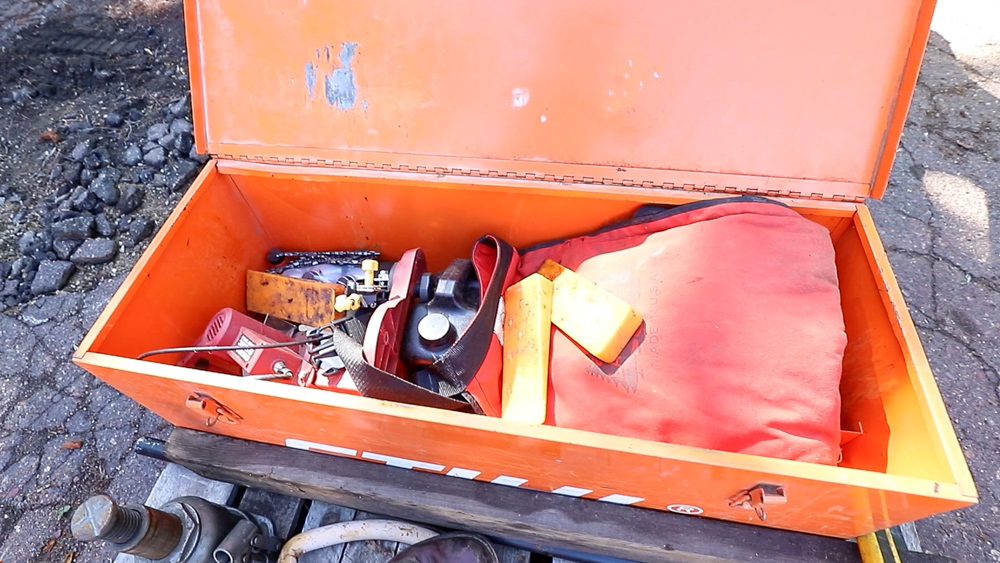 I’m bringing both of my saws and my saw box. I really like having a box just for the chainsaw stuff, so I can take all of my chainsaw accessories with me very conveniently. In that box, I have all the safety equipment, felling wedges, bar oil, extra chains, and a sharpener. Basically anything you would need for a chainsaw is in this box. It’s also nice to store the stuff when you’re at home because it all just lives in there. 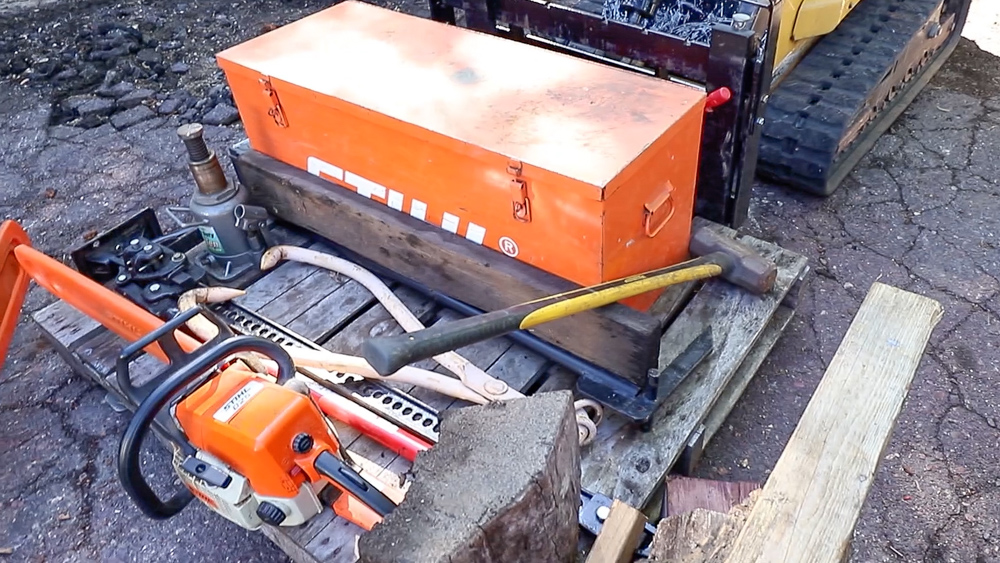 I’m also bringing all of my recovery stuff, such as jacks and tongs and other jacks. And I have a bunch of blocking too, because when you’re out there, you never know when you might need a block of wood to stick under something. Got the winch battery, a pry bar, and my peavey and cant hook are already in the truck, as well as my chains and binders. And since we’re going to be doing some cutting and maybe some felling, I’m bringing a sledgehammer for pounding in some wedges. 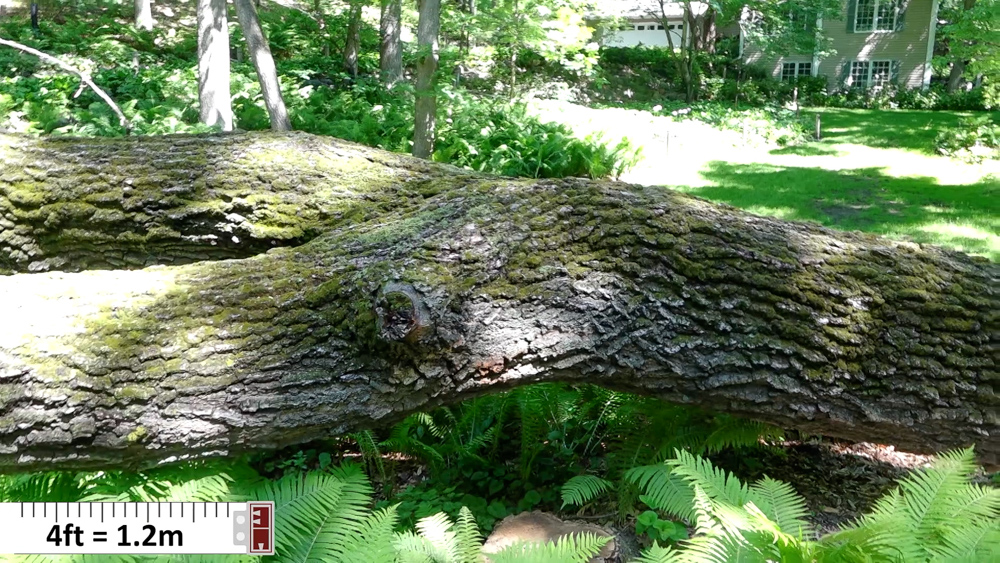 All right, here we are. After walking around it a little bit, I realize this is a lot of tree. It’s about 20 feet from the base up to the crotch, then the limbs above the crotch. The crotch is four feet in diameter, and down at the base it’s closer to three feet. 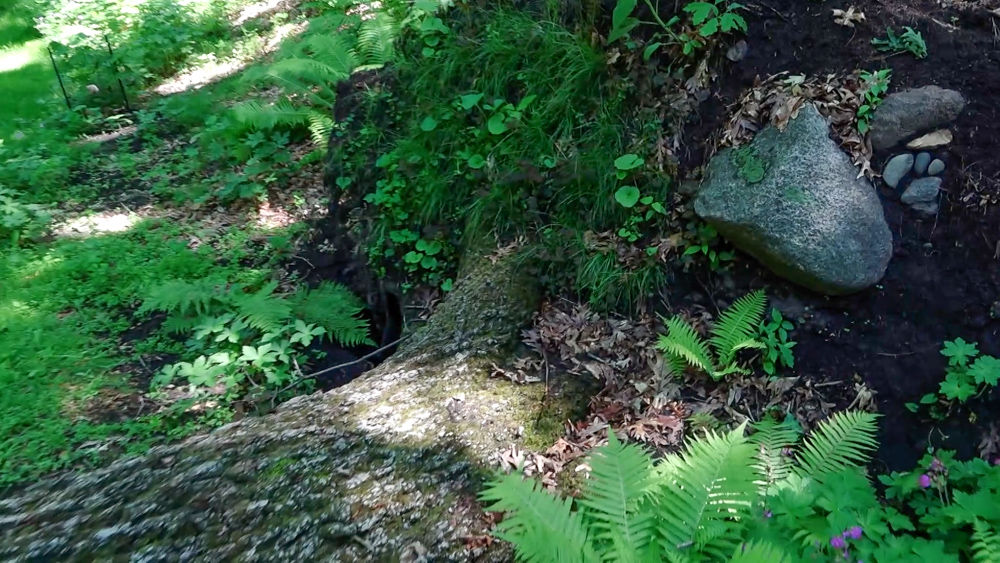 You can see how this thing has been uprooted, and it has also shifted all of the soil mound back with it. One of the challenges with an uprooted tree like this is that if it is sitting above a hole, if you release it anywhere, it’s going to try and stand back up down to the hole. I think we’re a little bit lucky here because this thing has fully forced up into the hill, so it’s not going to even try to stand back up or move backwards again. So it should be pretty stable as we’re cutting. 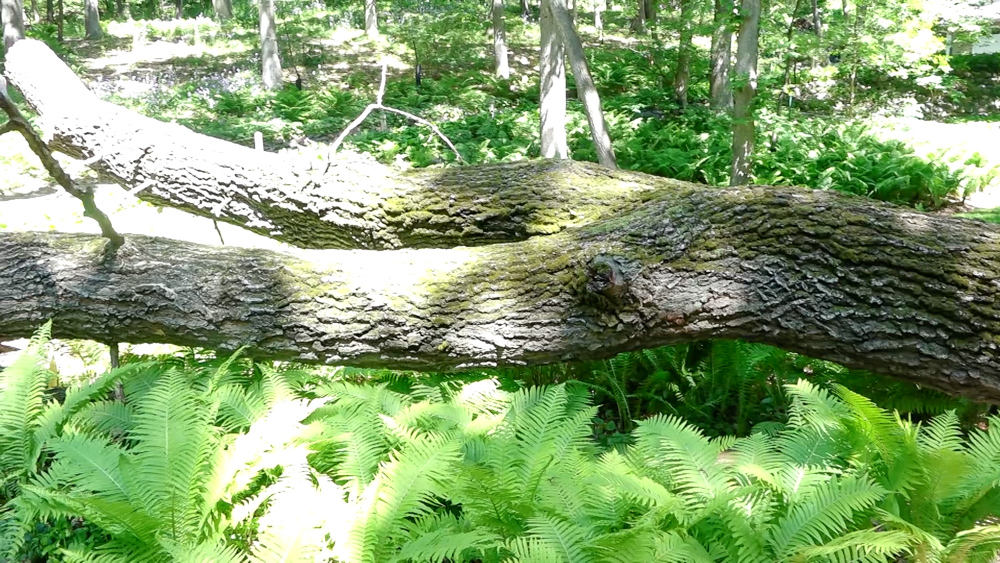 I’m thinking we’ll have a couple of smaller logs up here from the canopy, the main crotch section here, which is going to be about seven feet long, and then two eight foot long logs from the base. 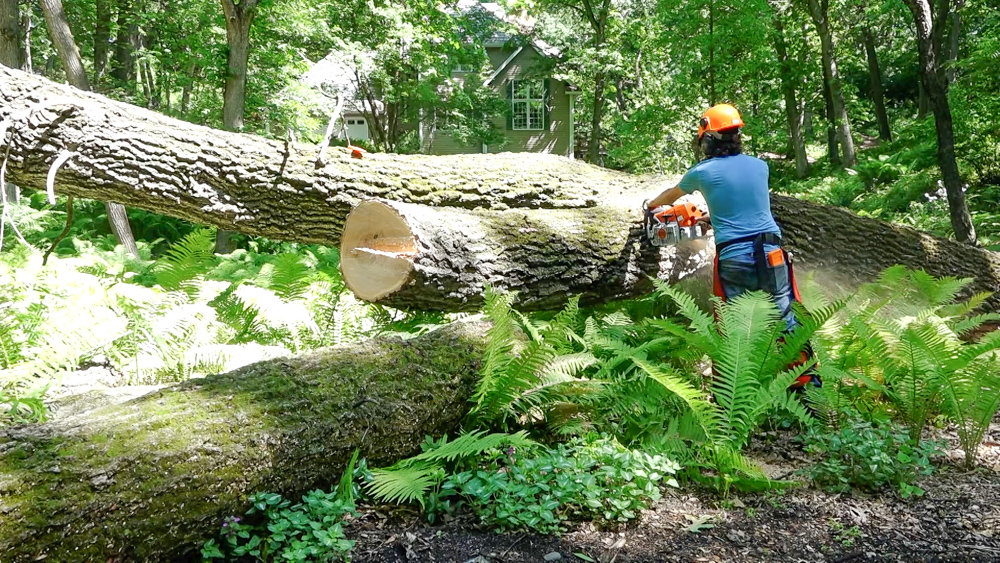 I’m going to get set up and get these things cut, but this is definitely going to be a multiple-trip situation. Today I’m going to try and get the base sections out of here because they’re uniform, and maybe grab a couple of the limbs as well. 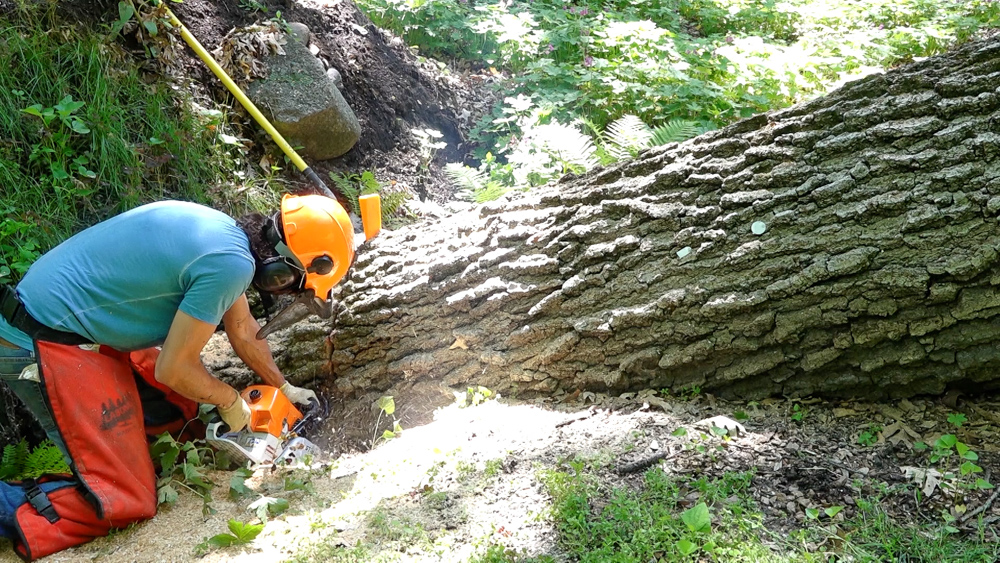 There is a large buttress root that comes down right into the hole, and that’s what I’m trying to saw through right now. It’s quite a bit bigger than my bar length at the moment, so I had to remove some dirt to buy myself some more space. Hopefully a few more minutes of cutting and it’s going to be separated.

Since I’m not really sure if this is cut all the way through, I’m going to give it a little tug with the trailer. 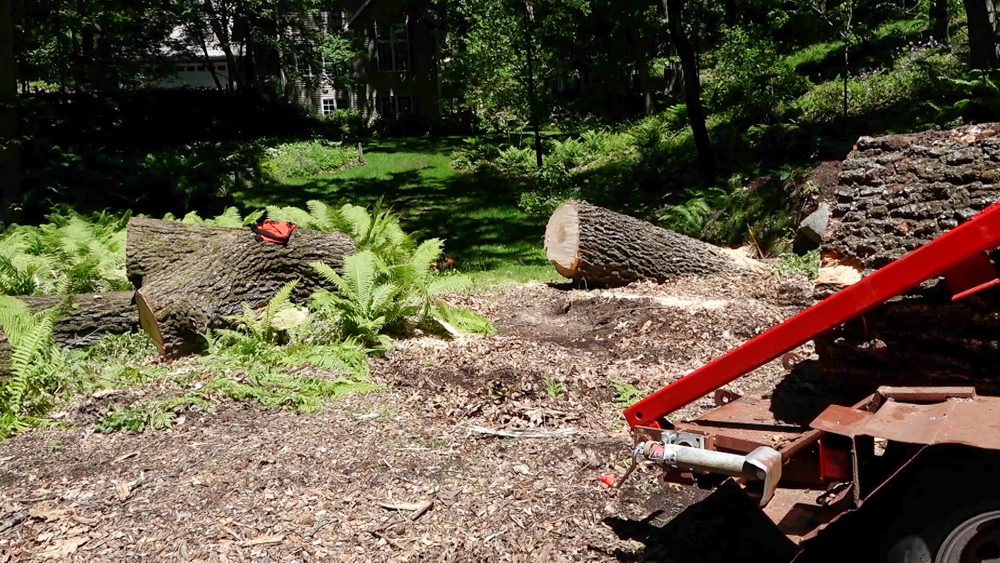 It seems like that is really stuck down there in the dirt, but I’ve got the trailer pretty well loaded now, so I think this is going to be the first trip. I’m going to come back and grab the crotch and another one of the limbs. Then I should be able to get more easy access to the base to try and pull it out of the ground. 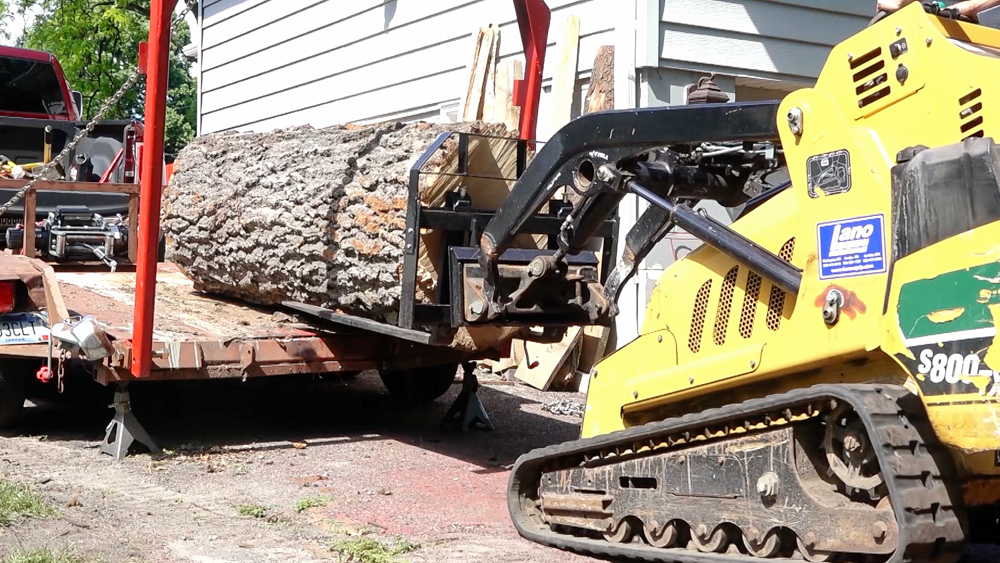 Back home, I can unload these logs, and luckily gravity and my skid-steer make this a fairly easy task. The last thing I’ll do today is seal them up with some end grain sealer, which keeps them from cracking as they sit here and dry. The sooner you can get these things sealed up, the better. 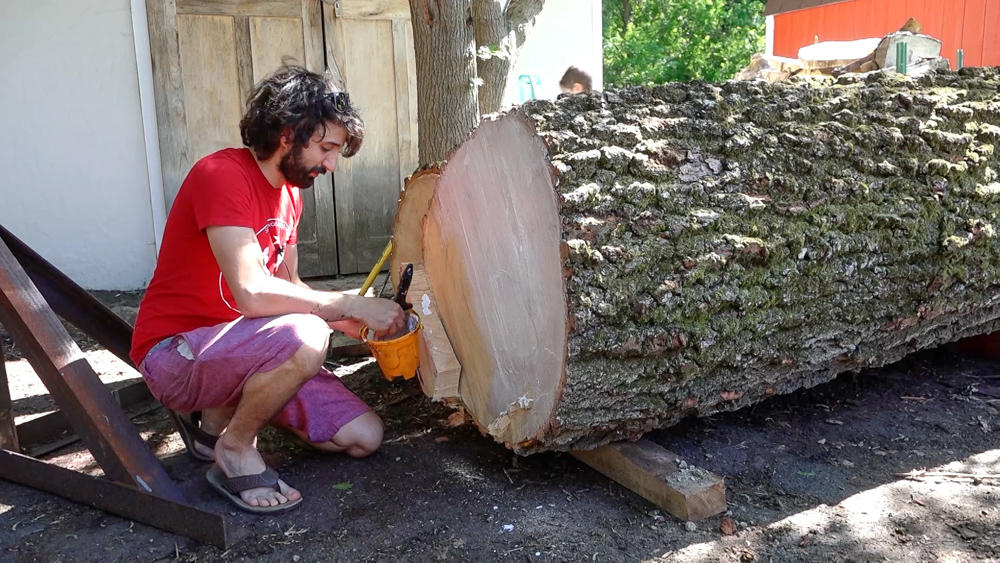 This is a good little spot for storage. I’m frequently asked where and how to store logs to make sure they are good for sawing. Over here, they’re in the shade, so they’re out of the sun. That’ll keep them from drying out from the outside too quickly. I’ve got them on some blocks so they’re off the ground, which will prevent them from rotting down there. If the bark is loose, you can always pull it off to help to keep some insects from getting under there. These will be really stable for storage for about a year, maybe two if I really need to. 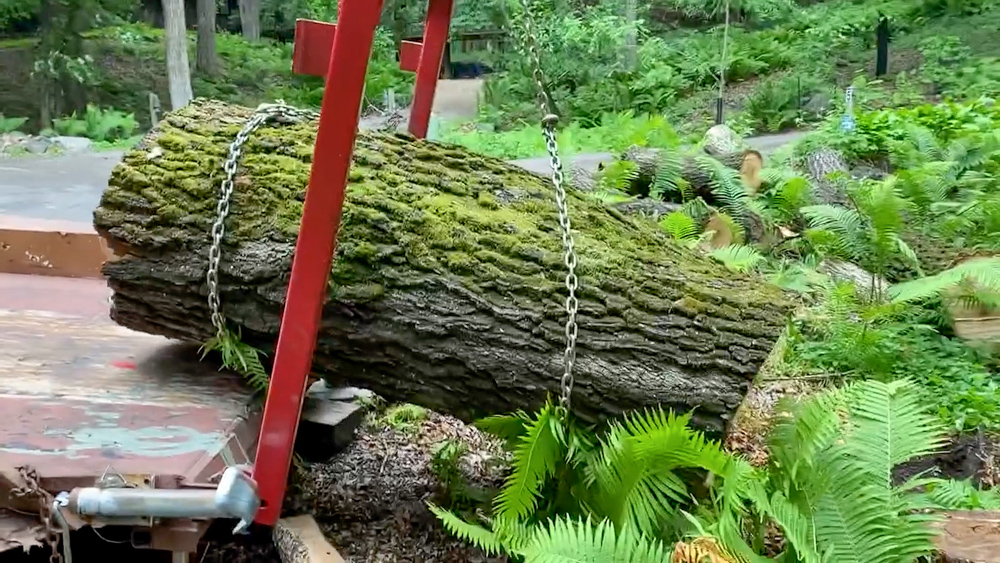 It’s a couple days later, and I’m back to pick up more of the logs. First up, I loaded the crotch and brought it back to my house.

I’m back for this guy again. Gil, the homeowner, got some exercise and dug out a lot of the space around the log, and it does look like there is still some material attached at the bottom of that kerf. With more space around the log, I have more access to get my chainsaw down there and cut that; however, I don’t really want to be down in a hole with a log when I release it. So I got the longer bar out, which will allow me to stand outside of the hole to make that last cut. 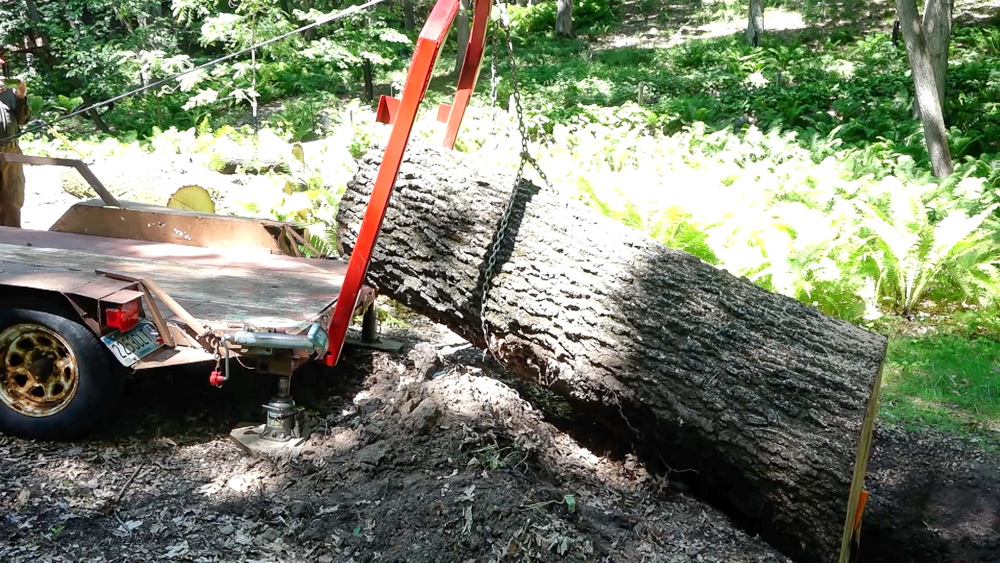 Then it’ll just be a matter of fishing this thing out of this hole. 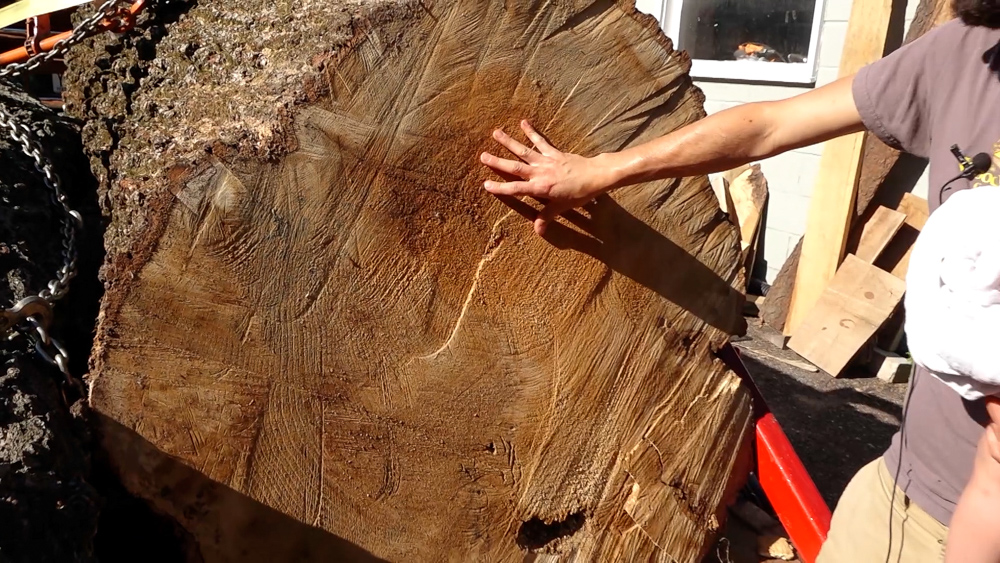 Let’s take a quick look at the end of the log. You can see this discolored area, which is actually some rot. It’s pretty common to have some rot at the base of the tree. It’s called butt rot. I will also often get asked if I count the rings to determine the age of the tree. I don’t usually count the rings because I have a good idea of how old these trees are, and I go for more of a ballpark estimate. That’s a lot easier than counting all those rings, so I’d estimate that this guy is 80 years old. 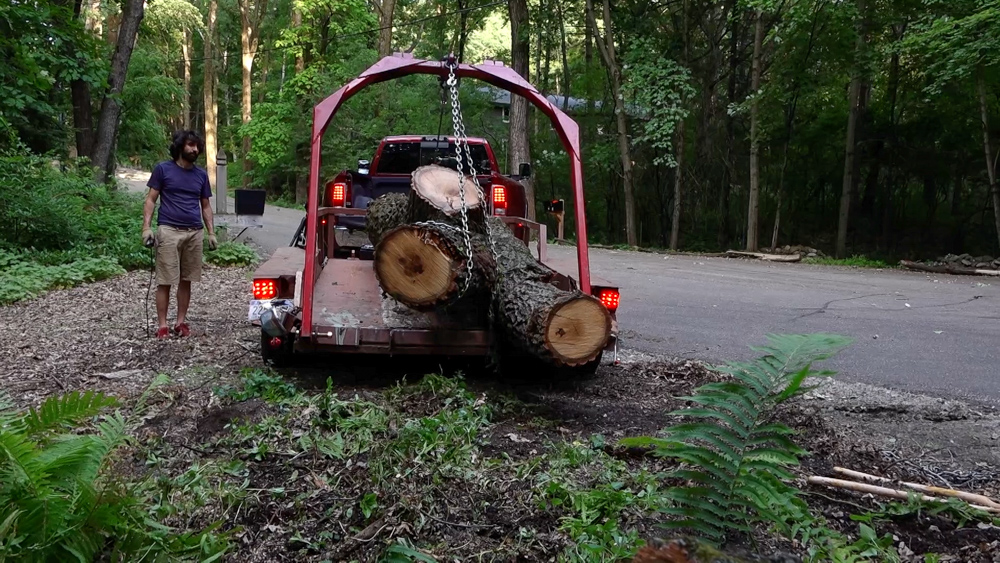 Back for the last pick up, there’s some small things to get on to the trailer, which is actually more challenging than the big stuff. 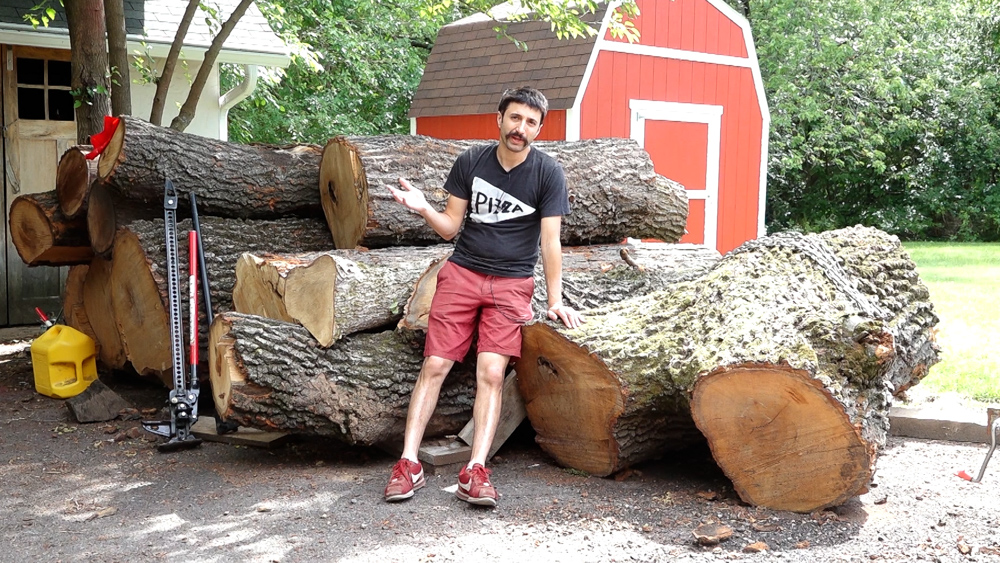 This was a really fun pick up. I really, really enjoy getting out and doing these things. It’s so amazing to talk to people and hear about the trees that impact their lives, or were a big part of their lives for years in the past. In this case, this tree was the focal point of that family’s front yard. They drove past it every day as they left the house, and there’s a lot of memories in that house and with the tree. It’s just a powerful feeling for me to know that this tree that has so many memories tied to it will become something that can live indefinitely.

So, yeah, I have a lot of logs here. I think I’m pretty well set for saw mill content for a while, even though I do have quite a few more logs to pick up. Thank you, as always, for watching. I greatly appreciate it. If you have any questions or comments on urban logging, anything on the saw mill or anything back in the shop, please feel free to leave me a comment. As always, I’d be happy to answer any questions you might have. And until next time, happy woodworking! 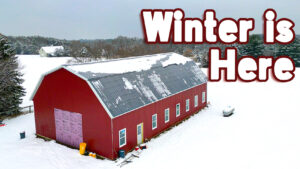 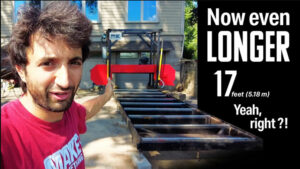