Picking Up a Big Silver Maple

A viewer recently reached out to me and asked if I wanted to pick up a log from his yard. He had a tree removed and was planning on cutting it up himself for some lumber, but time got away from him and he needs it out of his yard sooner rather than later. 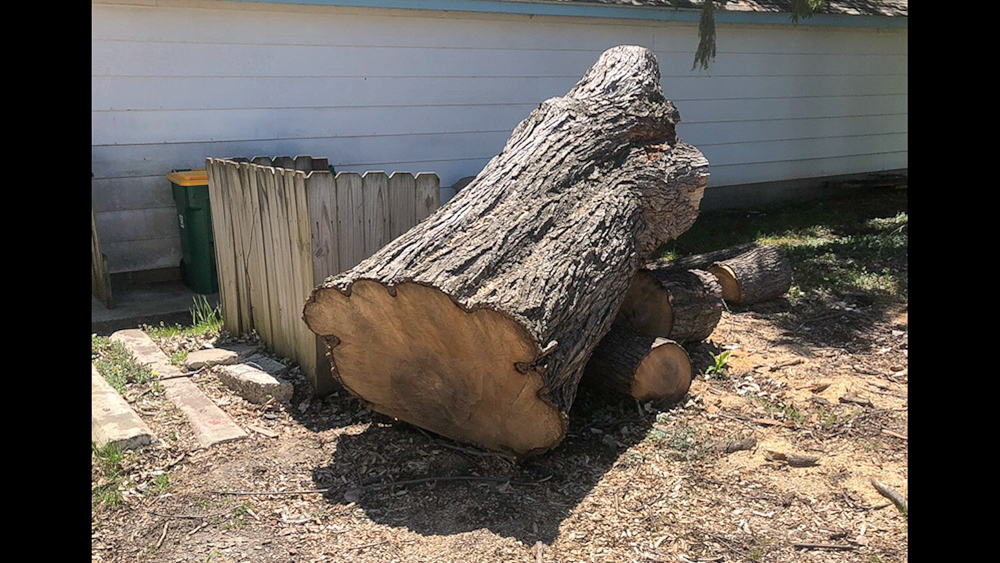 Of course, I said yes, and he sent me a few pictures of it. It looks like it’s in pretty good shape, it was a silver maple tree. And it’s a pretty good size; the log is 10 feet long and about 44 inches in diameter, so that should put this right around 5,000 pounds. 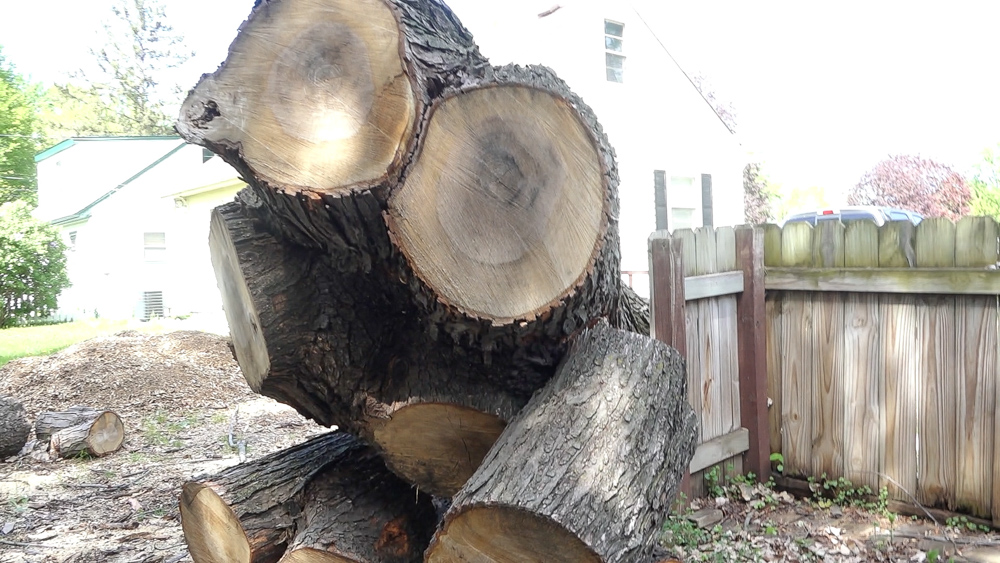 Okay, so here’s what we’re looking at. The log is propped up on some smaller logs. The biggest concern right now is this fence, so the first step is going to be to roll this thing into the clearing beside it, and it will be a clear shot up into the trailer. 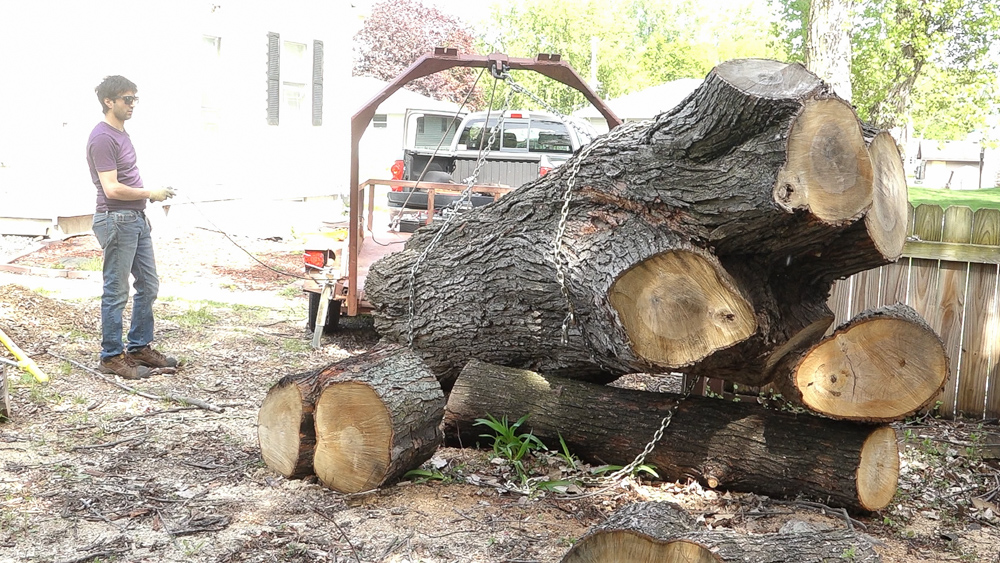 So to convince this thing to roll in that direction as I’m lifting, I have it wrapped in a chain which isn’t going to be sliding around too much. It should cause the whole log to pivot over and hopefully land more out into this clearing so I don’t knock out that garbage can fence. 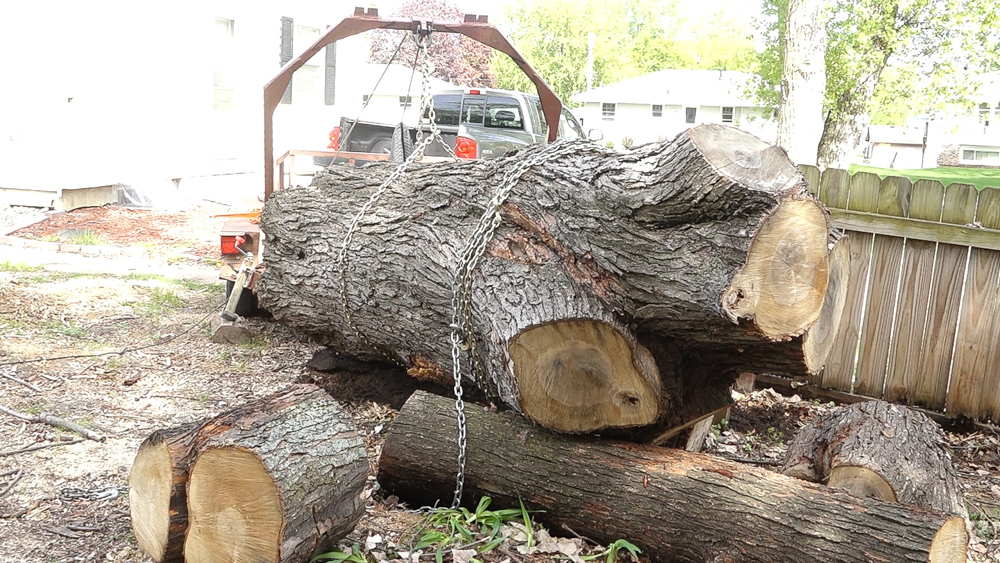 I’ve changed my approach angle so it’s a little bit more in line, but the bigger log it’s sitting on top of is really going to screw this up, because it’s going to try and slide that way even further. I’m hoping as I pull on it, it will get more in line with the trailer. 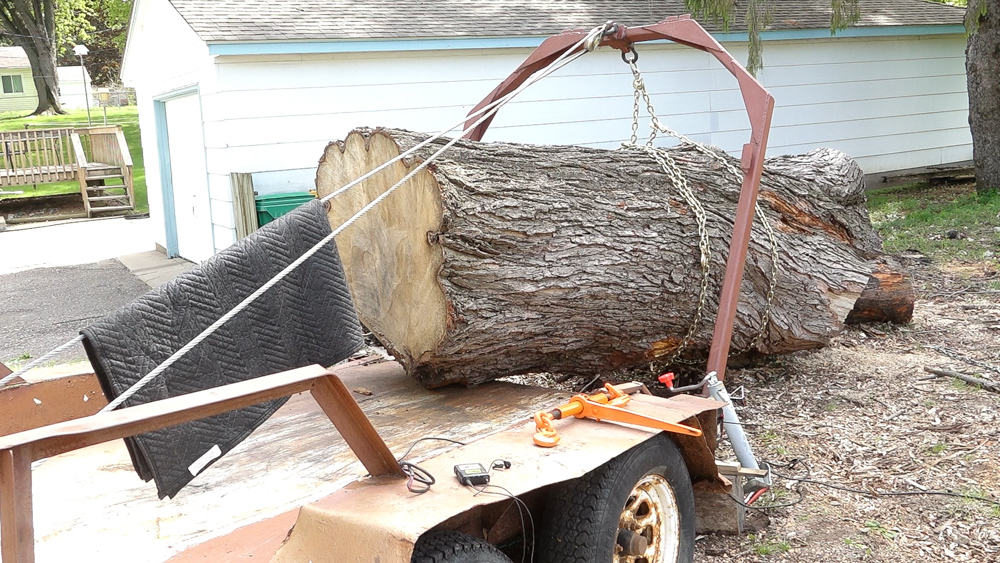 That went a little bit better than I was expecting, and it’s sitting on the back of the trailer now. Now this should be a simple matter of a typical loading operation.

I often get asked why I have a blanket on the cable. The idea behind the blanket is a little bit of risk mitigation as far as the risk associated with the cable or an anchor point or something in the whole system failing under load. The blanket weighs the cable down and should help to direct the cable down into the ground as opposed to going up into the air. It could also potentially entangle the cable making the reach on the cable a little bit shorter so it won’t be able to whiplash out as far. And if the reach on a whiplashing cable is reduced enough so it just barely misses you, those couple of feet can be a life saver. 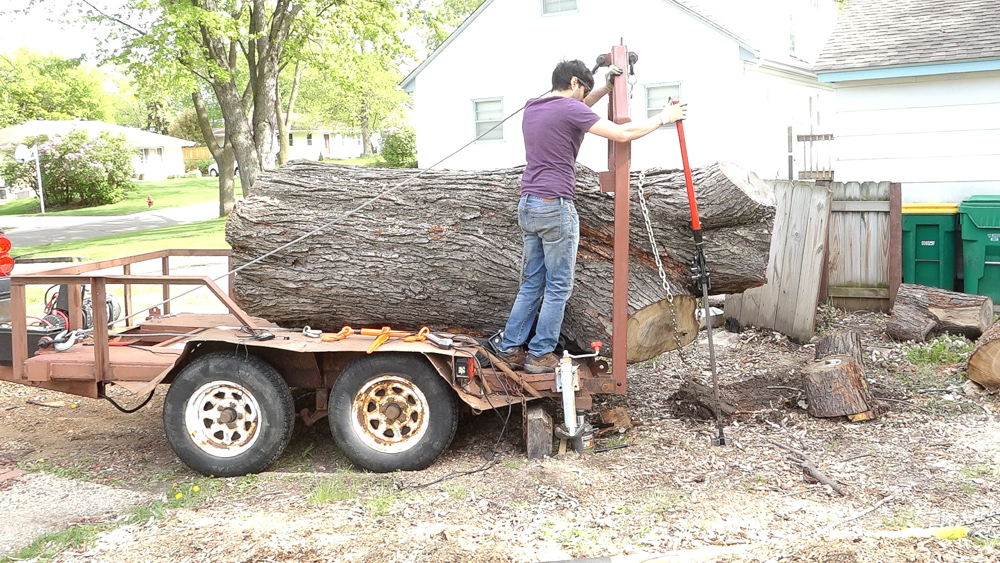 You can also get a synthetic cable for the winch as well. The advantage there is that the cable doesn’t have as much stored energy, so there’s less risk of severe injury if it does break. The downside to those is they don’t have as much wear resistance, and in an application like this, the cable does take a decent amount of wear. 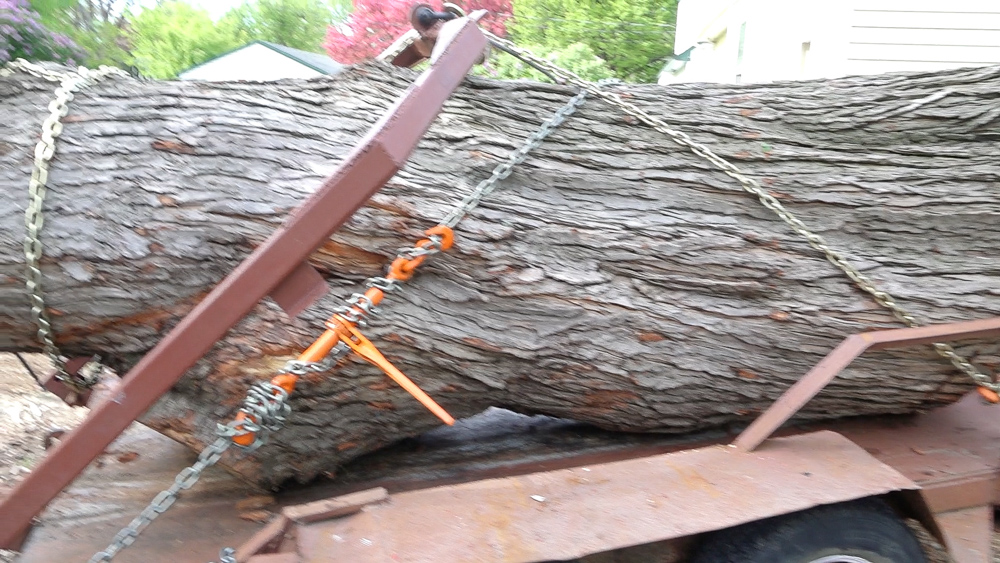 All right, the log is up there! I got it chained down and the last thing to do before I head out is walk around and make sure I have everything. Then, unhook the winch and drive back. 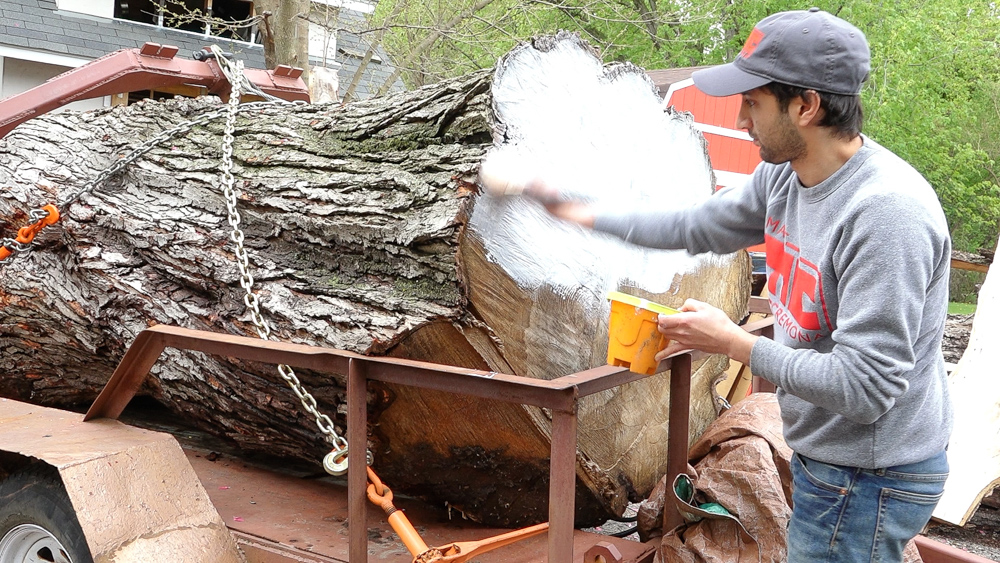 So another successful pick-up! I will put a coat of anchor seal on here, but it looks like it hasn’t checked a whole lot, so that’s indicative of having some sealant on there already. This was definitely one of my longer pick-ups. The door to door time was right at two hours; I’m a little rusty. It’s already five o’clock tonight, and I’m not in a huge rush to get this off the trailer, so I’ll save that for another day.

So it’s a couple of days later, and I have some free time to off-load this log. Normally I set this up with the winch on the trailer pushing the log off the trailer and onto the mill, but today I’ve set things up so I’m using the winch on the mill to pull the log onto it. I have a pair of skis which are just some bent quarter inch steel, and they work really well to slide logs along the bunks of the mill. So I lubricate those with a little bit of diesel from the lube bottle, and then I can place them under the log as it’s coming off. This is really helpful on a log like this where you have two crotched limbs putting their weight down between the bunks. The skies help to lift and allow the whole log to ride over top of the bunks, and it comes onto the mill fairly easily. 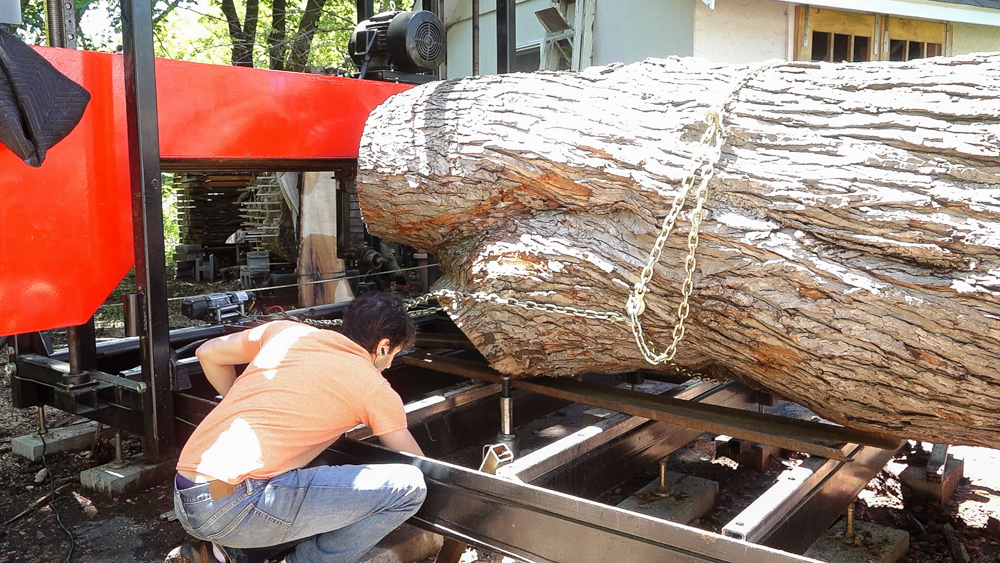 The last thing I’ll do is raise the log up a little bit on both sides and put the skies underneath those crotch areas. That’s going to further support and stabilize the log so it’s not going to be rolling around on me as I’m cutting it. 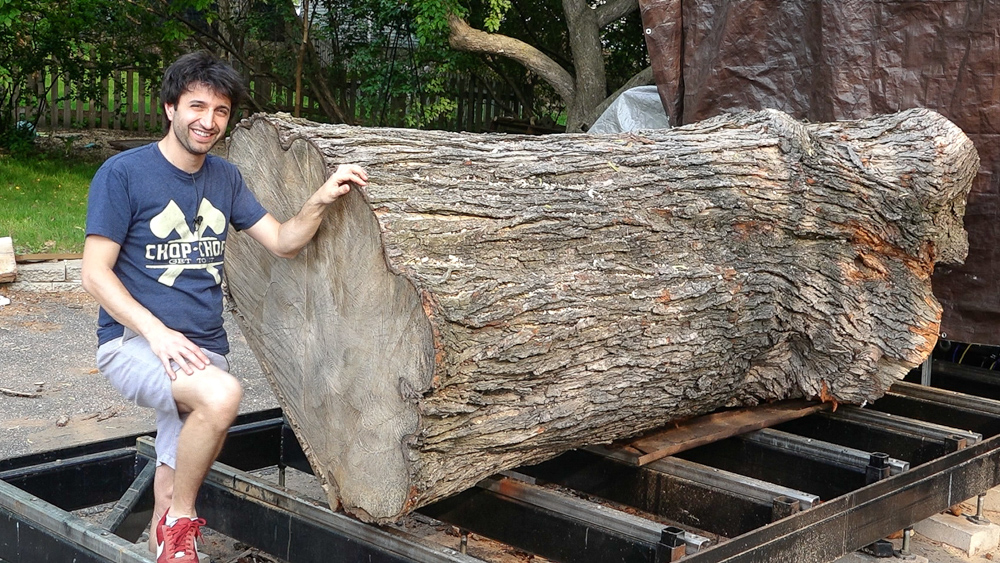 I’m really looking forward to opening up this log and seeing all of the awesome stuff inside of here. It’s quite large and that makes me pretty excited! I’ll probably get this cut up in a couple of weeks, so stay tuned! Hopefully you enjoyed a little more detail on the pick-up process; I’ve gotten requests to go into a little more detail on how to get things onto the trailer with the arch.

That’s it for this one. Thank you as always for watching. I greatly appreciate it! If you have any questions on urban logging or anything back in the shop, please feel free to leave me a comment. As always, I’ll be happy to answer any questions you might have. And, until next time, happy woodworking!