Last spring, I saw a firewood posting on craigslist for some really large logs.  The trees were removed as part of a street widening project.  I was able to get 5 of them starting from the smallest.  The biggest logs I was unable to get due to their size.  The crotch section was just one part of a much larger tree. 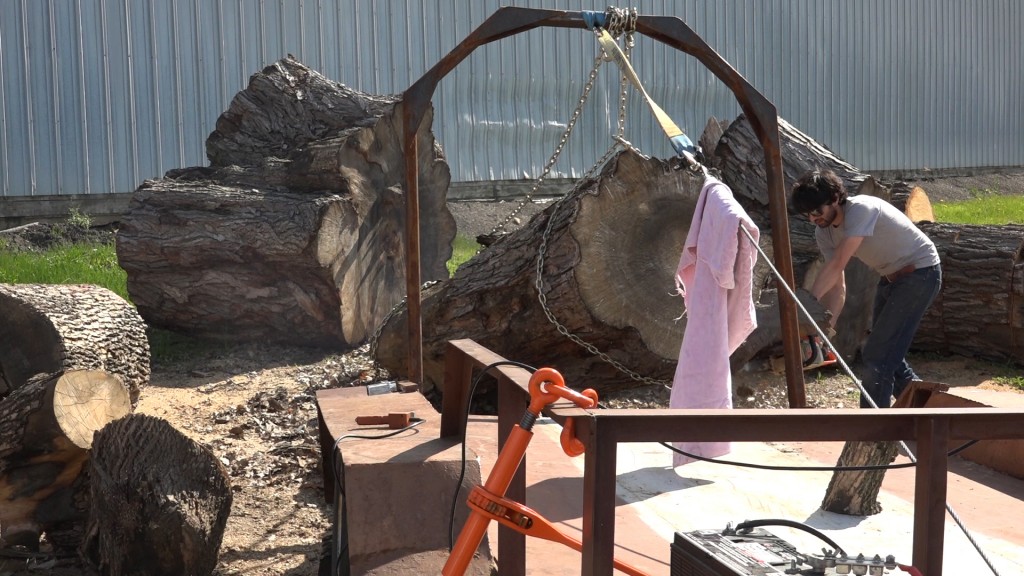 As you can probably imagine, these logs were the main driving force behind building the sawmill.  In fact, I built it big enough to handle the log in the background.  At the time, I didn’t have a way to transport it or mill it.  At least now, only one of those barriers remain which is the easiest one to resolve. 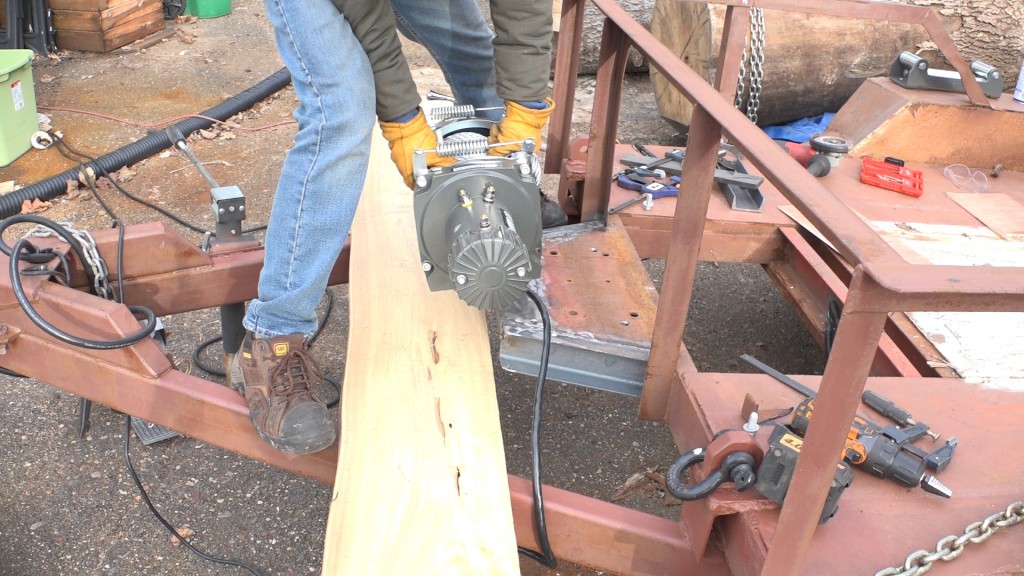 Last summer I started having issues with the winch that I had on my trailer.  It would not feed out under power.  It would pull line in but when the motor would reverse it would lock up.  I didn’t realize how often I needed to let line out when there was a load attached.  It was super annoying.  I took the entire winch apart, not knowing where the issue would reside.  I went through the gearbox, drum, and motor.  When I removed the motor, I tried running it directly from the battery (not using the control box) and it would lock out when the motor was supposed to run in reverse.  I took the motor apart, couldn’t see any issue, and put it back together.  After that, it started working again but it started locking up again the next time I used it.  I wanted to add a decent size winch to the mill so I can pull logs onto the mill and roll them (I just have my small atv winch on there right now) so instead of buying another winch of the same size to put on the trailer, I decided to upgrade to a 18000lb model.  The larger model has more power so it should have a longer duty cycle for the stuff I’m doing.  A nice plus is the bigger winch has a 12000lb capacity when the drum is loaded with cable compared to 6000lbs on the old one I was using. 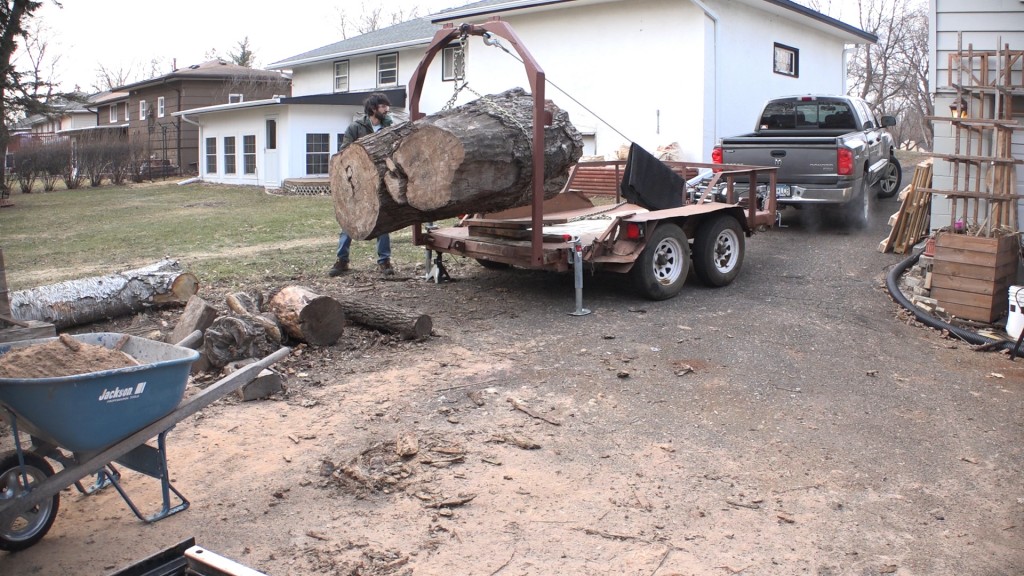 Last summer I moved this log over here so I could build the mill where it used to be so this is the 3rd time I’ve picked this log up.  Feels lighter with the new winch. 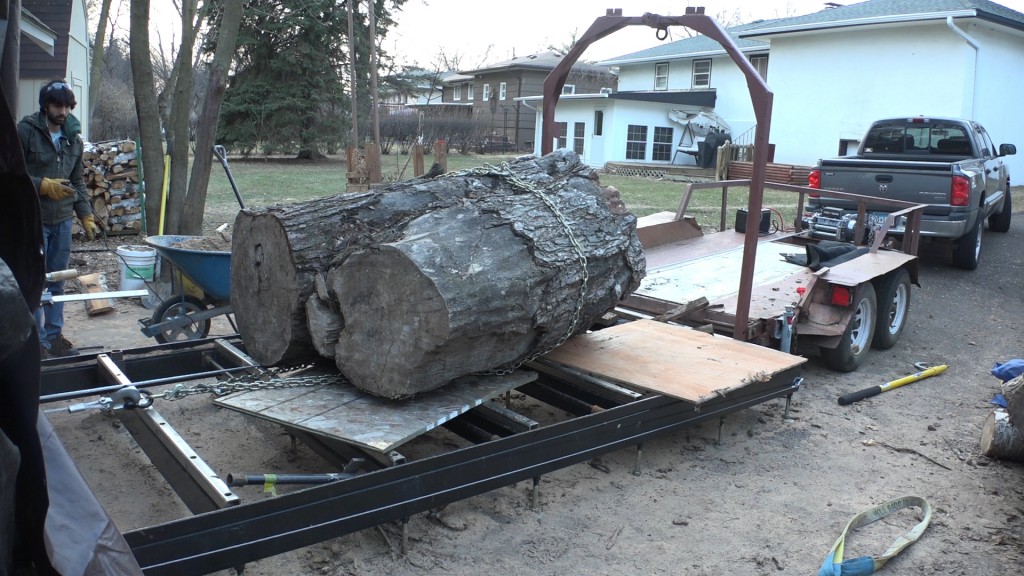 I can just drive the log over to the mill and pull it off by running the winch line to the far end of the mill and back.  This is one of the operations that having a decent size winch on the mill would help with.  I also plan to add a roller system to the bed to make this process easier but a couple scraps of sheet goods make good skates. 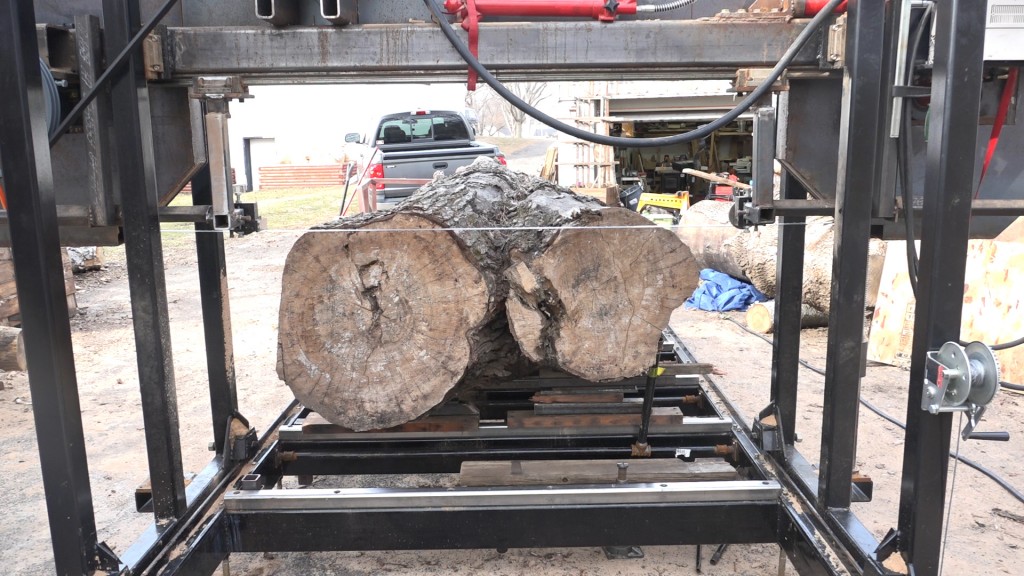 I spent some time leveling the log and used the clamps coming from both sides to hold it in place.  I’m taking off a large amount of material for this first cut.  This offcut will become the roof for the slab stack and I’d like it to run the full length of the log. 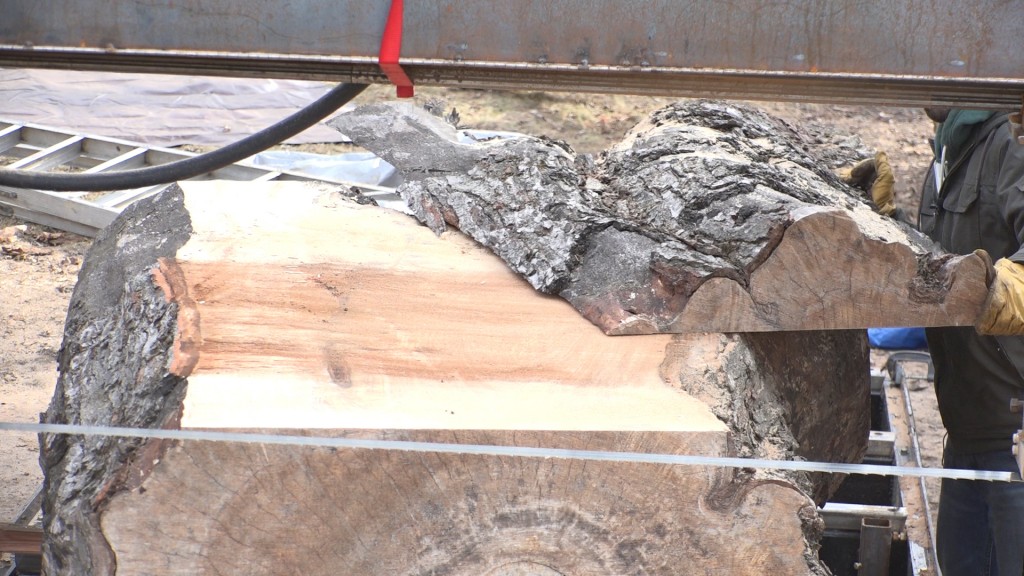 In the future after the stack is dry, I can cut the roof slab into boards. 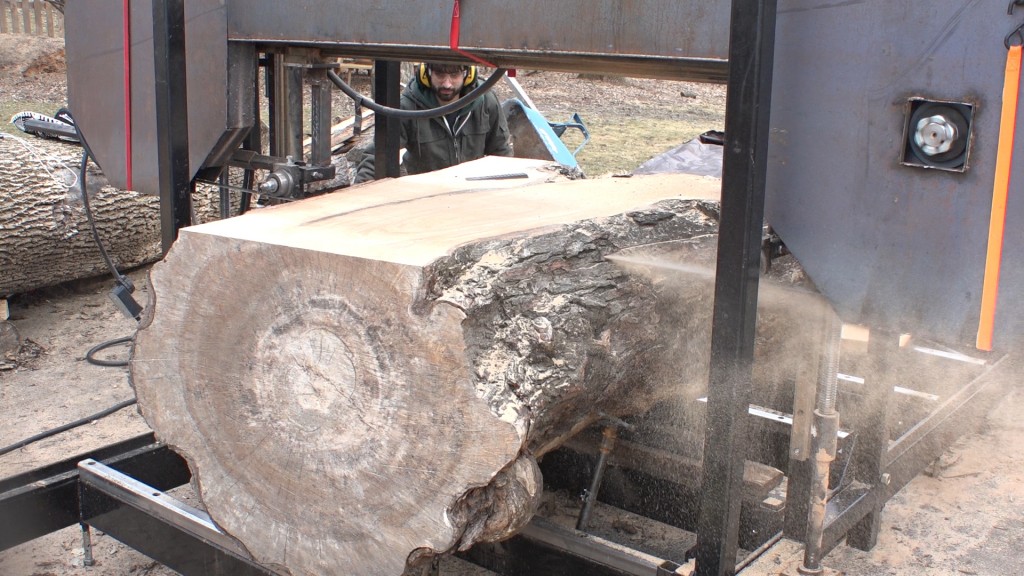 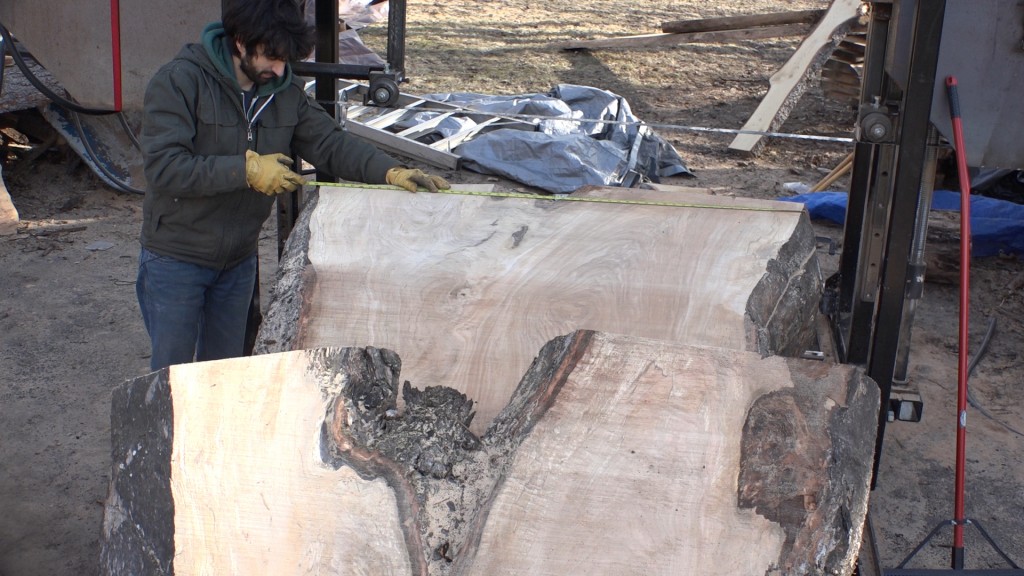 I pulled the first slab out of the way to check out the second one.  This one came in at 53″ wide at the crotch. 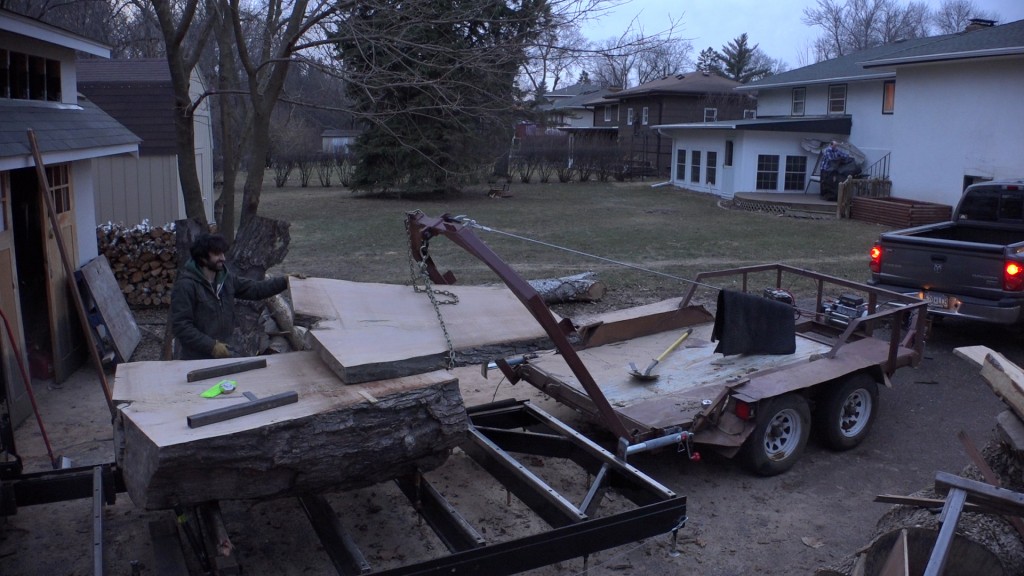 To move the slabs, I can use the arch on the trailer to pick them up off of the mill and drive them over to the stack. 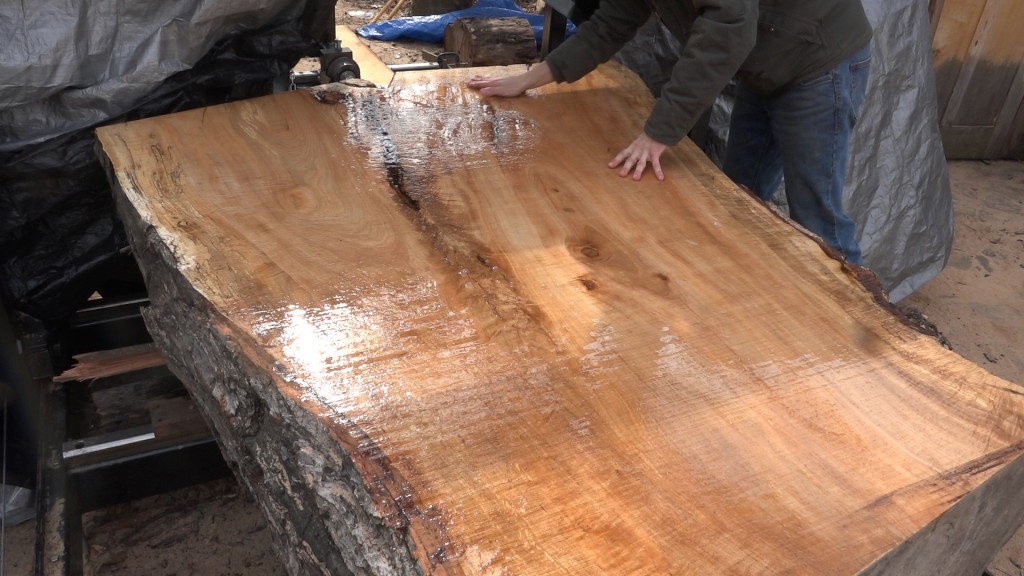 A little water on the surface of slab number 3 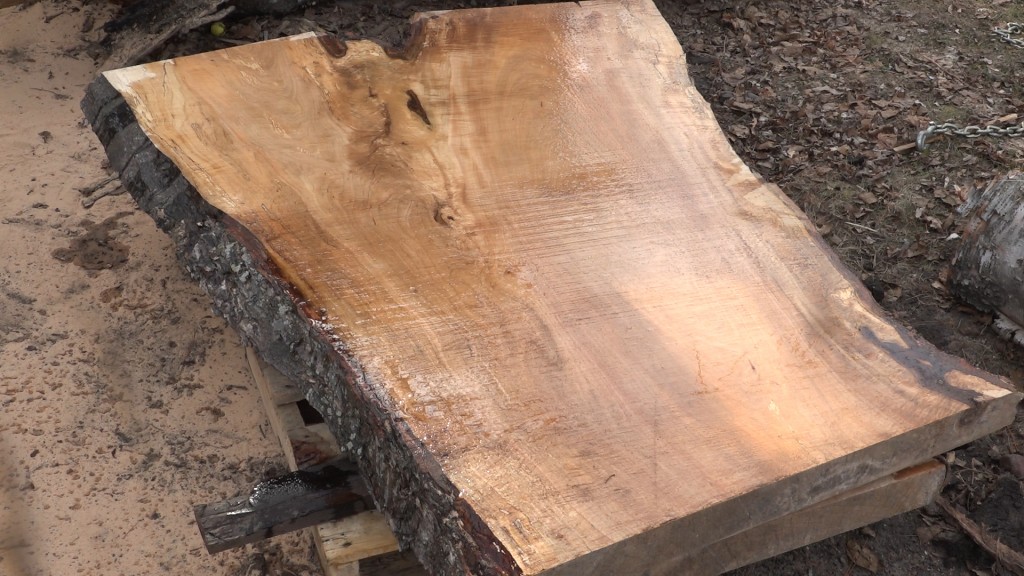 Some water on slab number 2 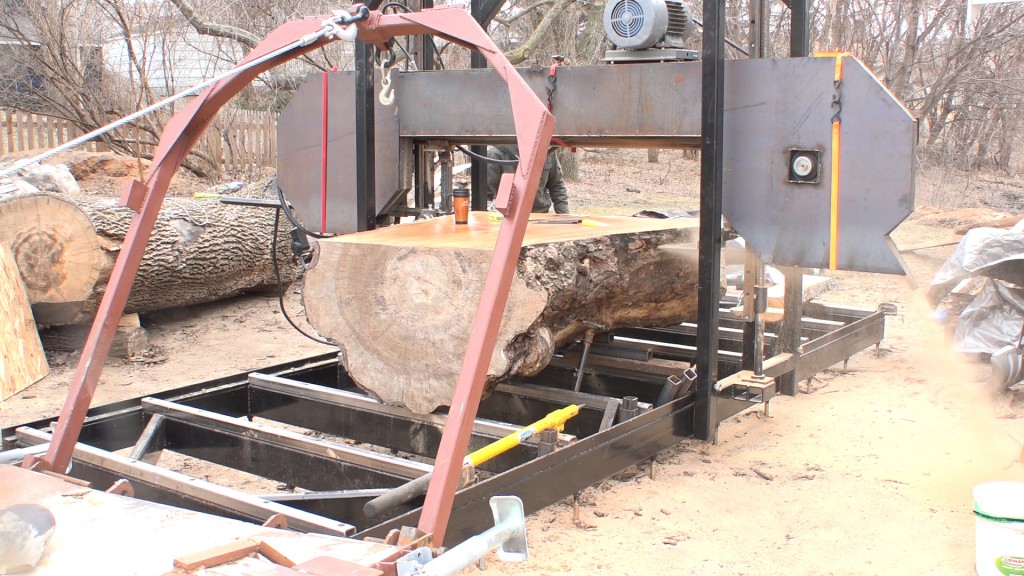 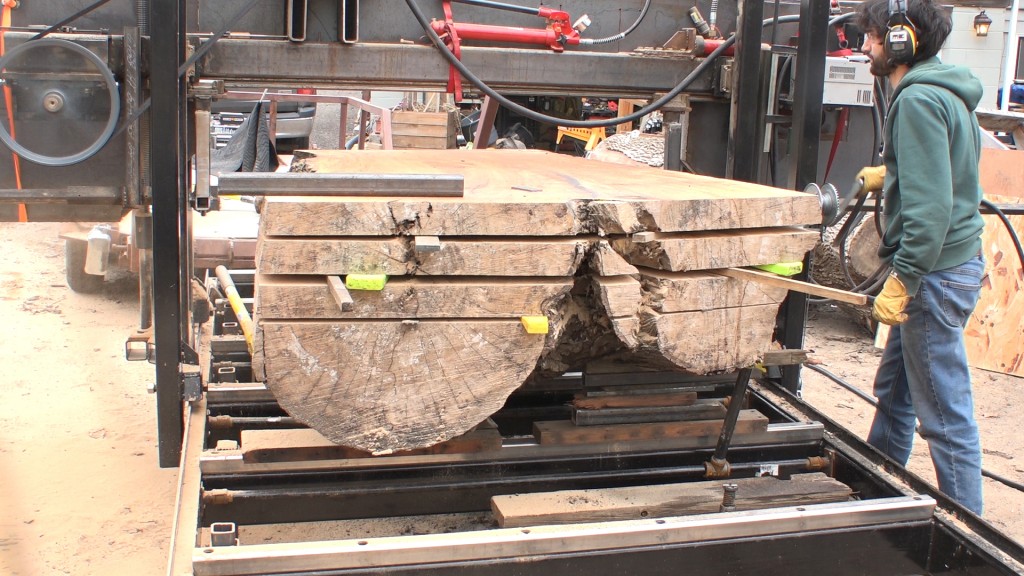 I cut a few slabs at a time so I could unitask a bit instead of bouncing between moving and cutting.  I inserted wedges as I went so I would be able to get a chain between the slabs to lift them out. 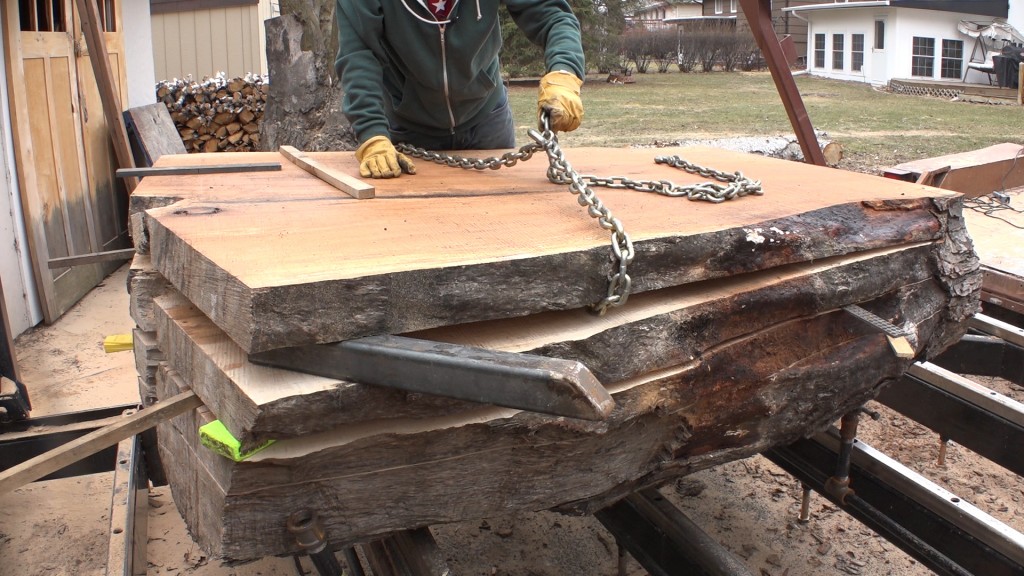 I could rock the corners a bit to get some square tube under the corners which gave me enough room to tread the chain around the slab. 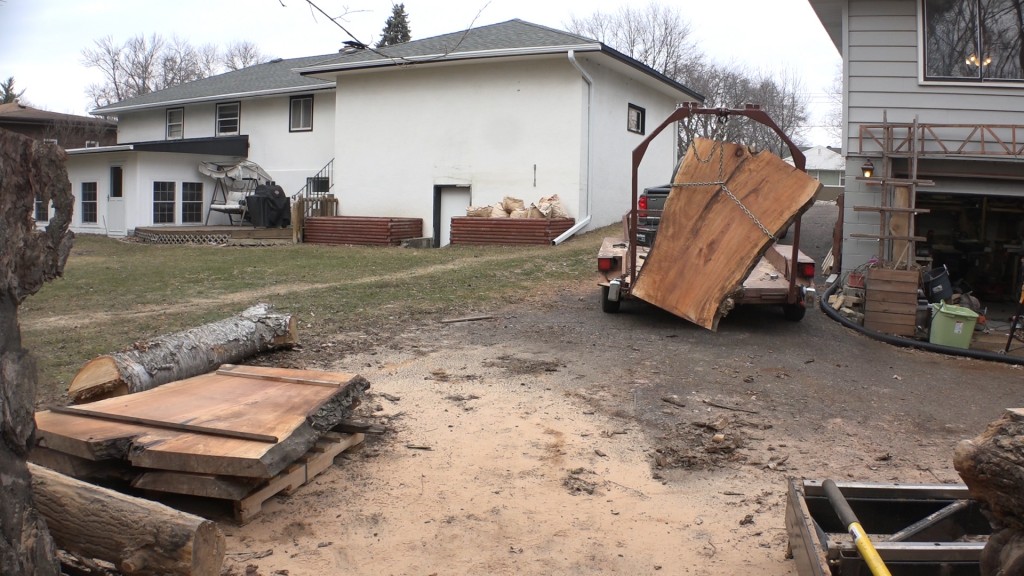 Moving slab number 3 to the pile 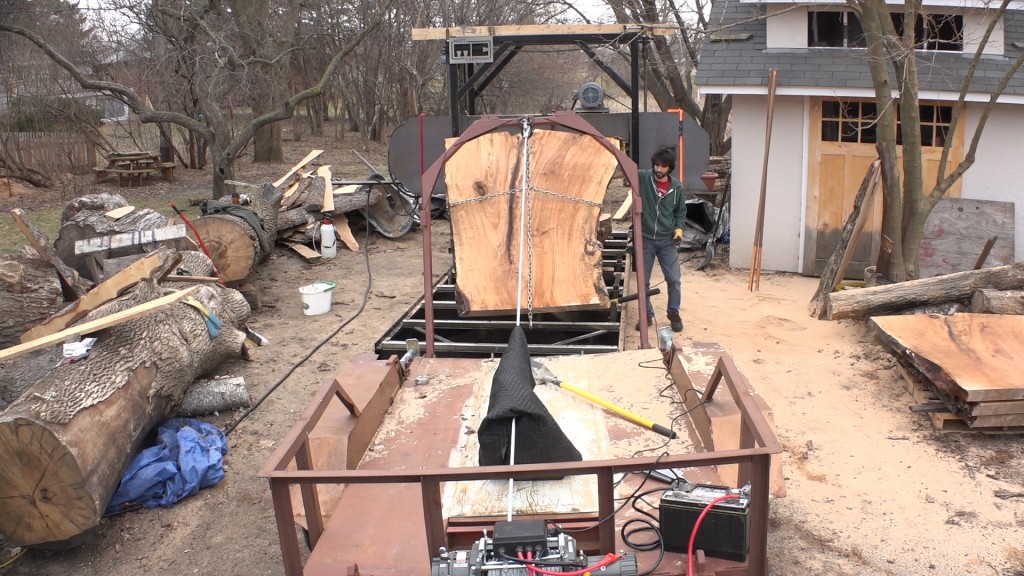 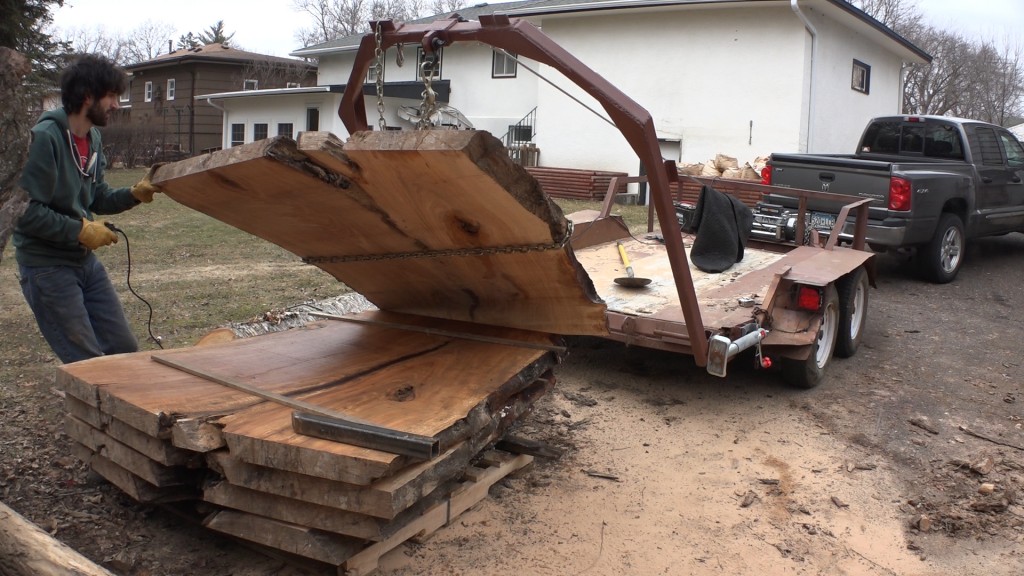 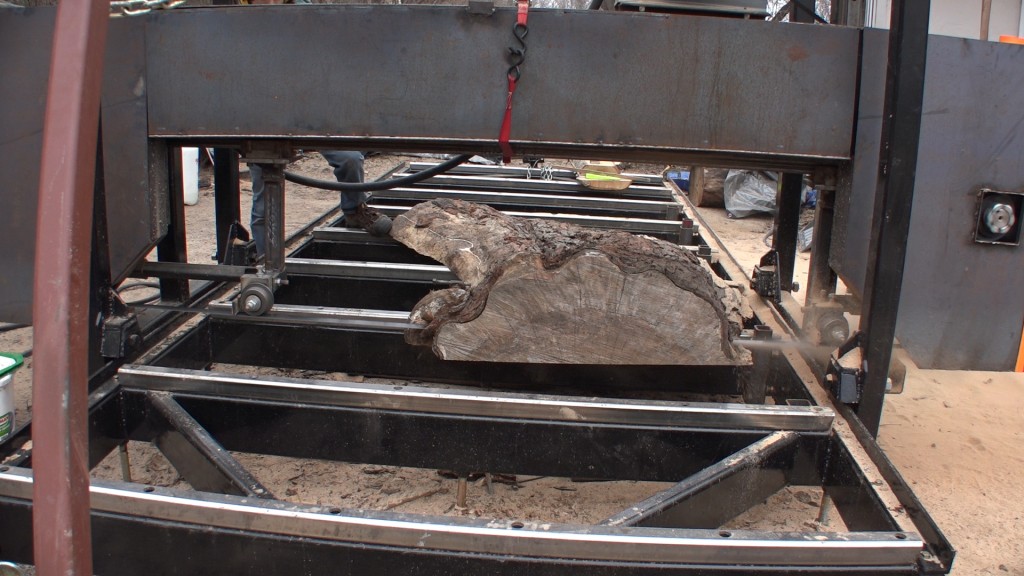 Once I got down far enough, the slab became unstable so I flipped the remainder and started cutting off of the bed. 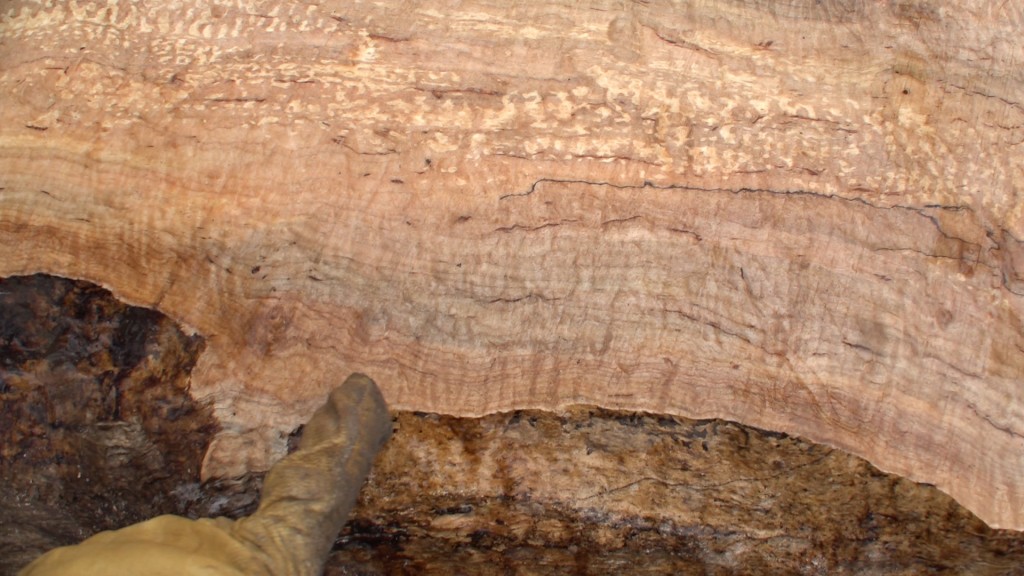 The last 12/4 slab is my favorite.  It had tons of quilting and curling. 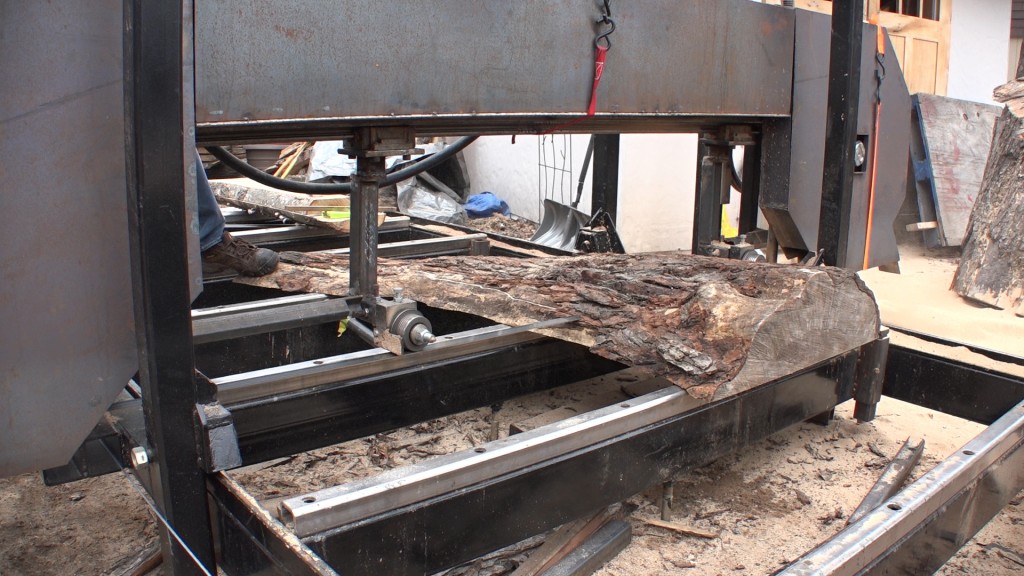 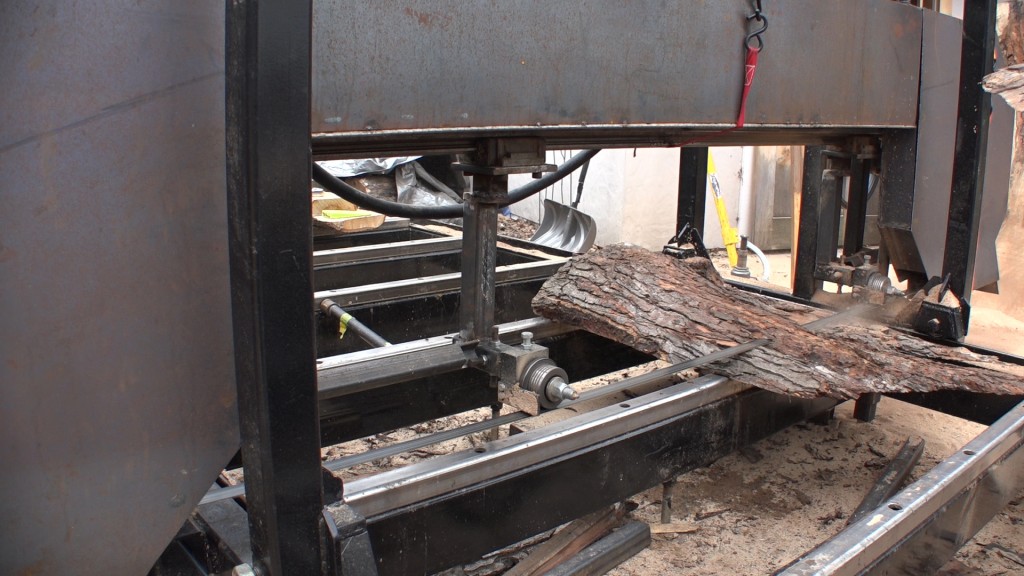 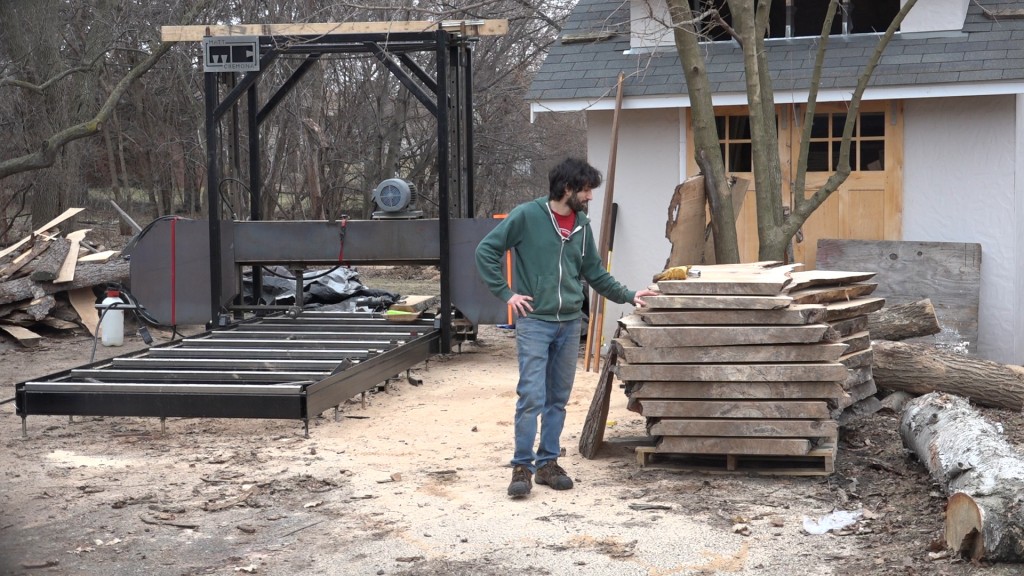 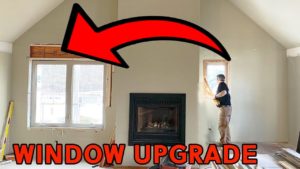