Sawing a Pair of Big Crotches on my Sawmill

Welcome to my backyard, and welcome to the first season of sawing here at the new property. So far, I have used the saw three times, and I haven’t cut anything from my own pile at all. Today we’re going to start getting into the pile and seeing what I’ve been collecting for the last few months. 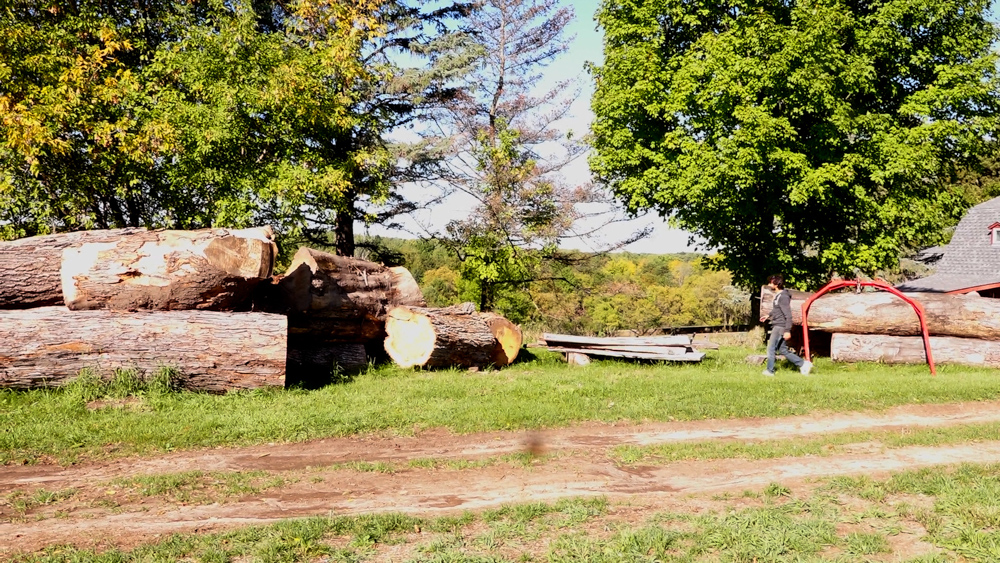 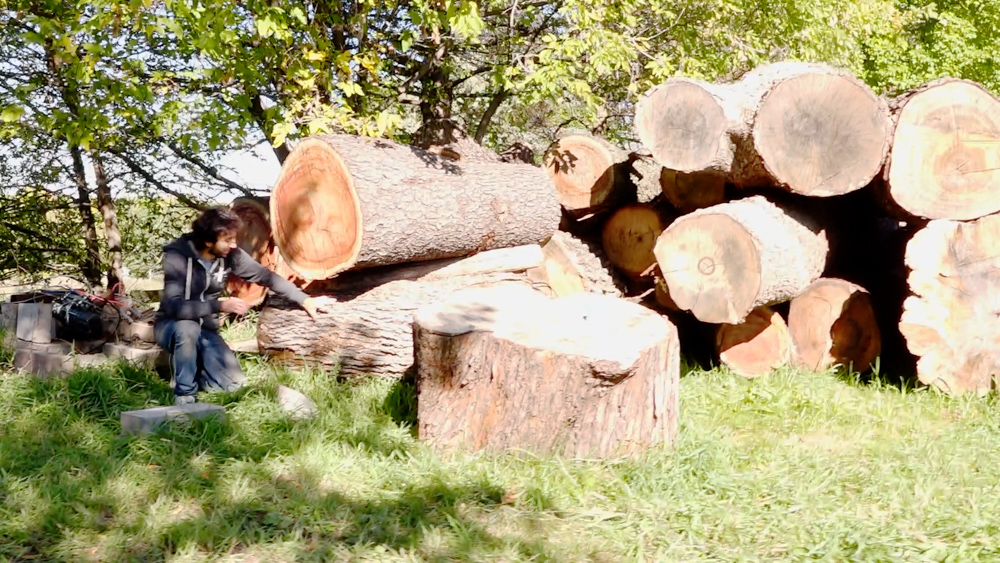 But today, we’re going to be sawing a couple of pieces of crotch, which I think will be a fun way to kick things off here. I have these two pieces of crotch here. The bottom one is a piece of white oak that I got from my buddy, Brent. It’s a little bit weird because there’s not a whole lot of bottom section to the crotch. It’s going to be like a pair of shorts. And then on top, there is a piece of cherry from the largest cherry tree from Iowa, which I picked up from my buddy Josh a few months ago. 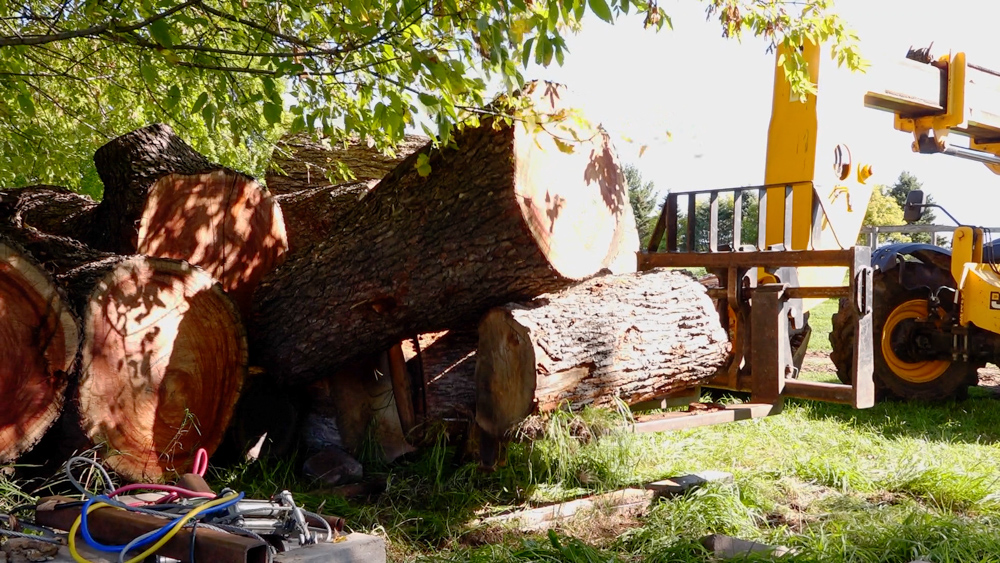 I’m going to go grab the telehandler, pick these up and take them to the saw. 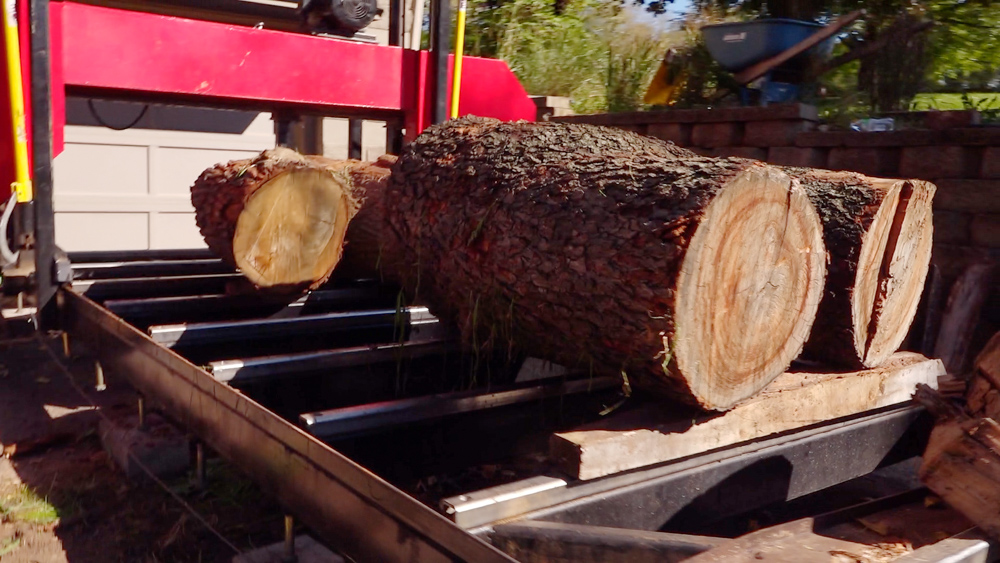 Let’s take a quick little walk around here and see what we’re dealing with. This looks a lot bigger on the saw than it did out in the field. At this end we’re close to four feet wide, and it’s about four feet long. This will produce some odd, square-shaped slabs, which should be interesting. 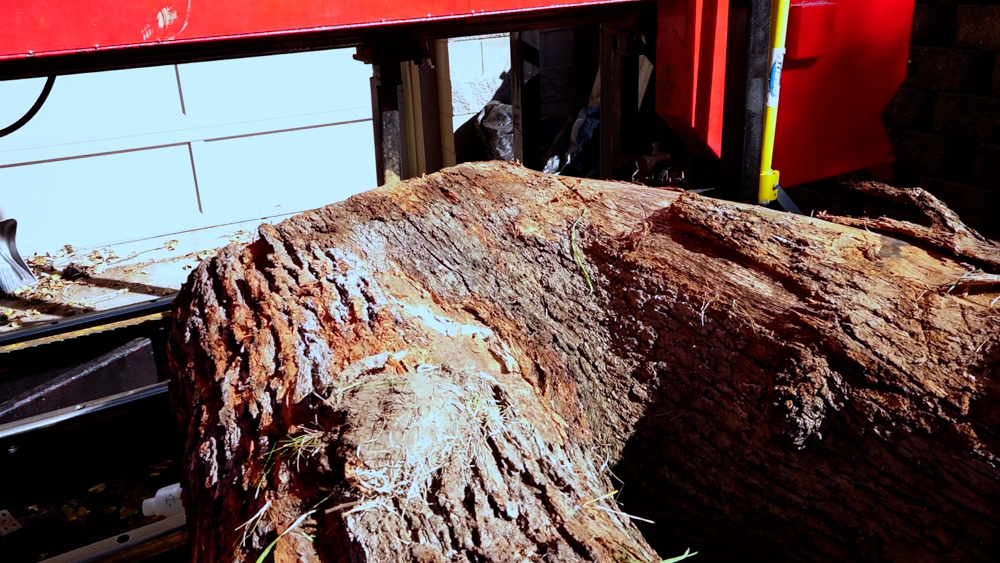 Like I mentioned earlier, this piece of white oak doesn’t have a lot of crotch area. This is not that long, so it should make some oddly shaped pieces of wood. 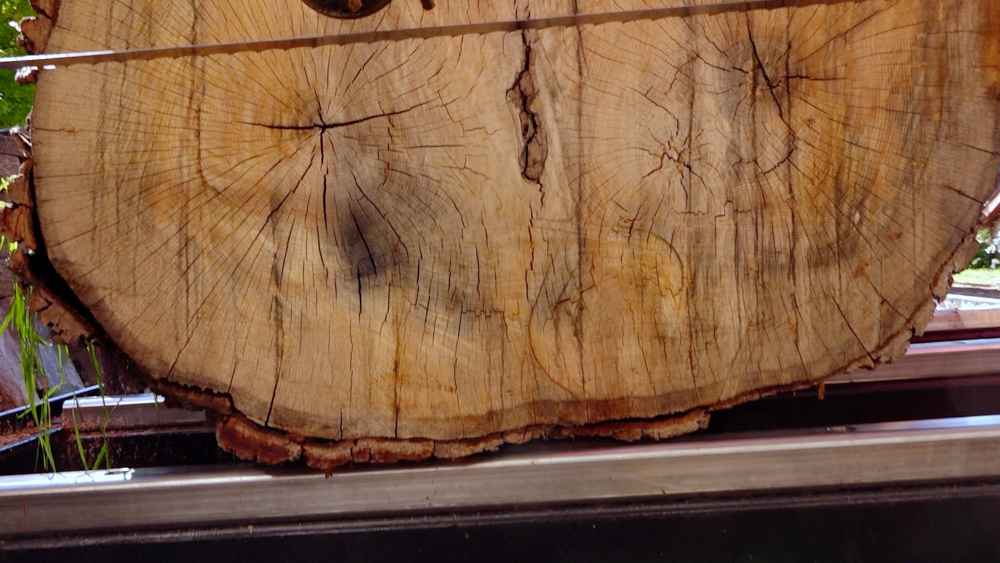 One thing to note about this log, we do have some iron staining right in here, meaning there is probably some embedded metal somewhere, either in this section of the tree, or somewhere higher in the tree that this piece comes from. This log is also about four feet long. I’m anticipating we will just see some crotch figure and not a whole lot else with these logs. I don’t see anything else super noticeable or notable at this point with these logs. 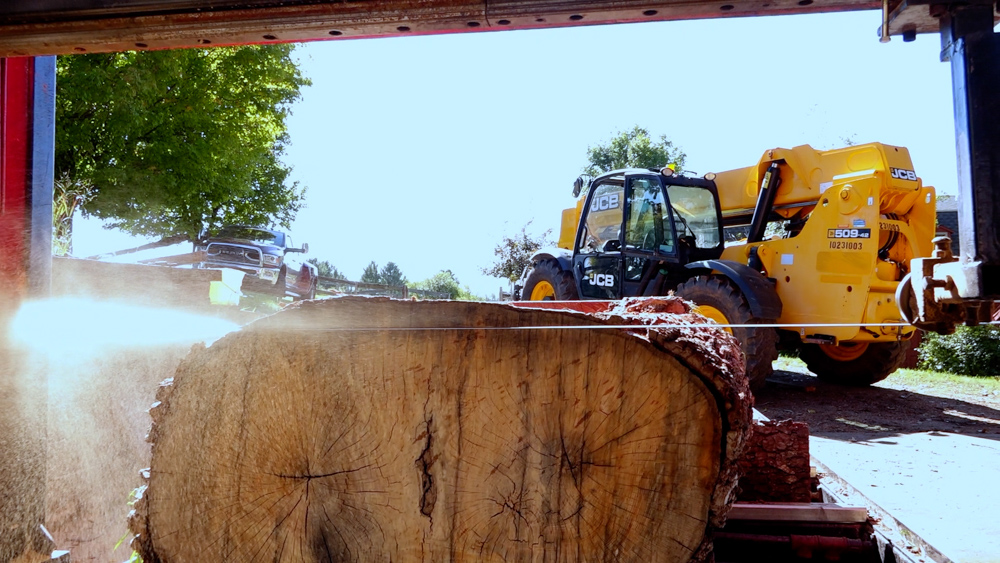 So to start, I will come in with the saw and start skimming off the top to establish a flat surface. We’ll take them off the saw, flip them over, and then saw all the way down to the bed. 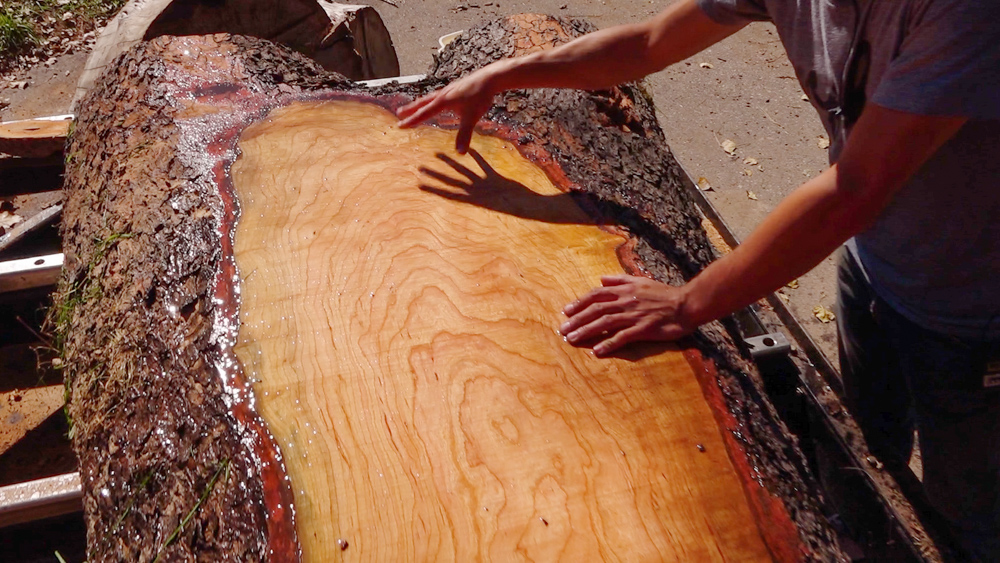 Now that we’re a little further in, let’s take a look and see what we got going on. Not a whole lot going on in here other than some pretty nice-looking cherry. I think this is going to get way more dramatic as we go through the rings. There’s a little bit of figure starting to show up here, which you’d expect because we’re just getting into the crotch section. 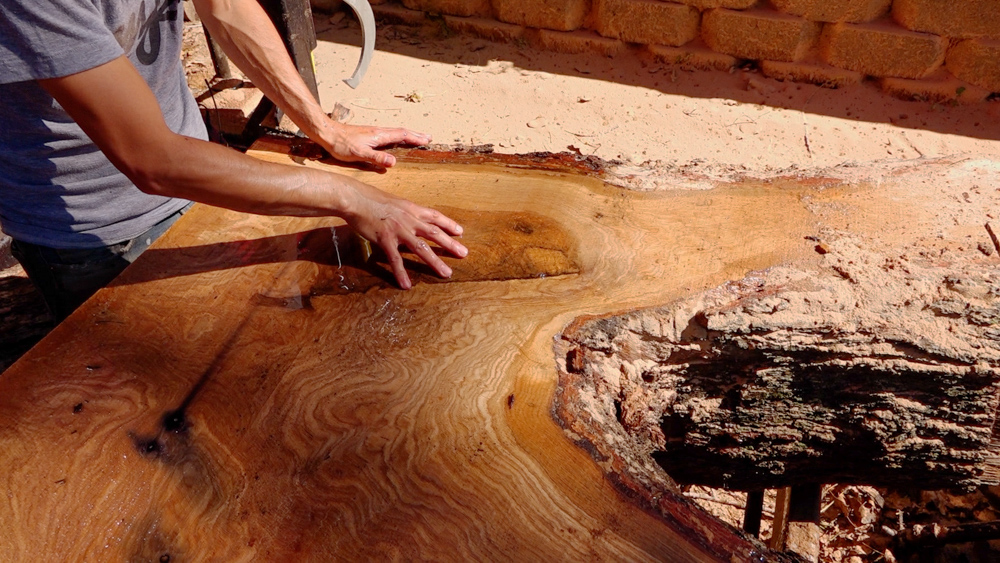 The white oak is a little more interesting. There’s what I think is an old limb that was coming up that caused a fun little staining situation over here. 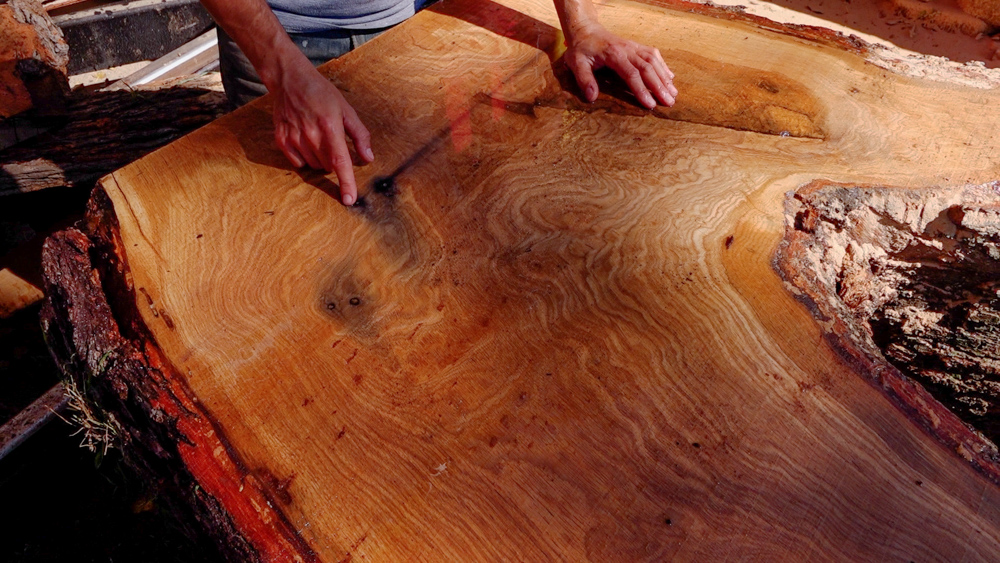 Even more interestingly, we found our embedded steel already. There are two nails here and there were probably two more nails a little higher up, but we went right through them no problem. So that’s a good preview of what we’re going to be dealing with here! 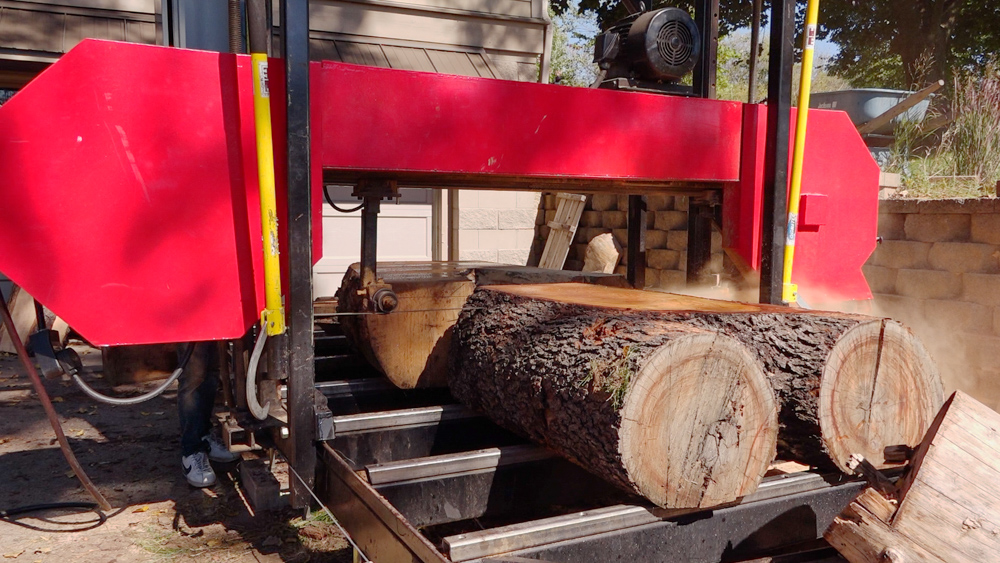 I definitely hit something on that last cut, I definitely felt something happen, and we are missing a few of the teeth on this carbide blade. Let’s see what the heck we cut through. Hope it’s something big! 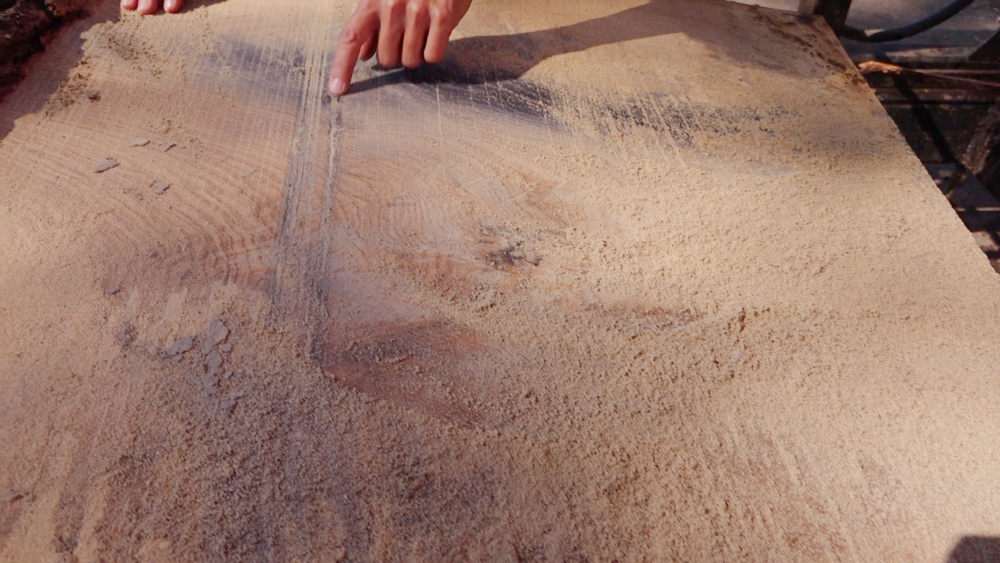 There’s a lot of staining, and you can see where the cut changed. There’s a few nails, but not as big as I thought it was going to be. It looks like the blade tore part of the nail out and exited with the cut. I was hoping for something huge. 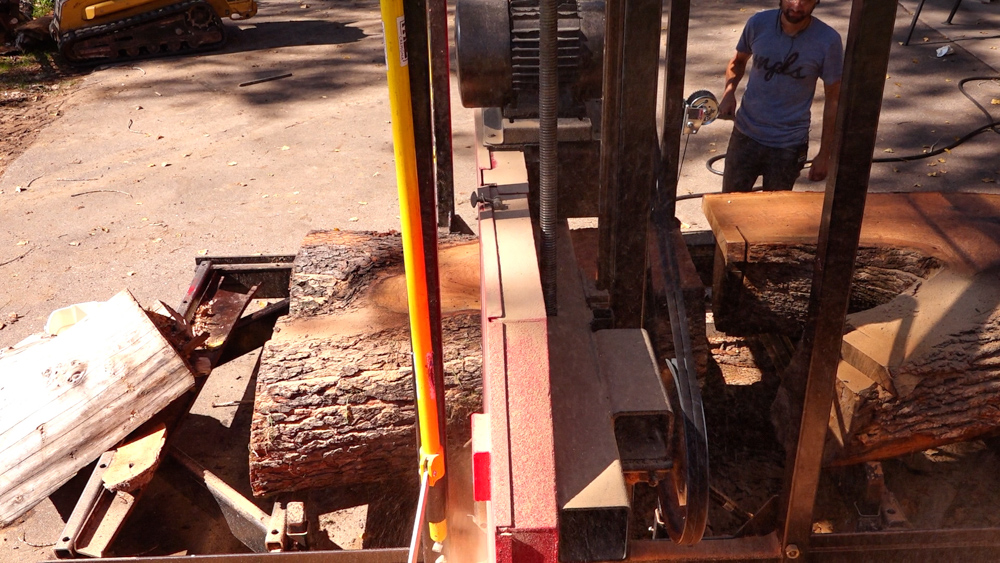 I think now we’ll just go ahead and fully slice these things up, then we’ll take a look as we get to the end. 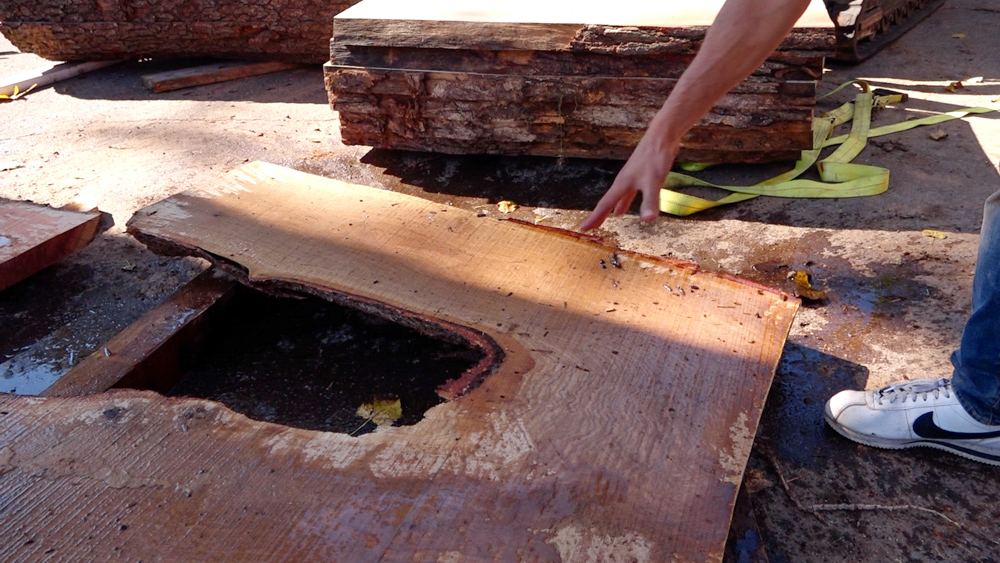 Some pretty basic white oak, but we’re starting to get a little bit of the undulating in the grain from the crotch. 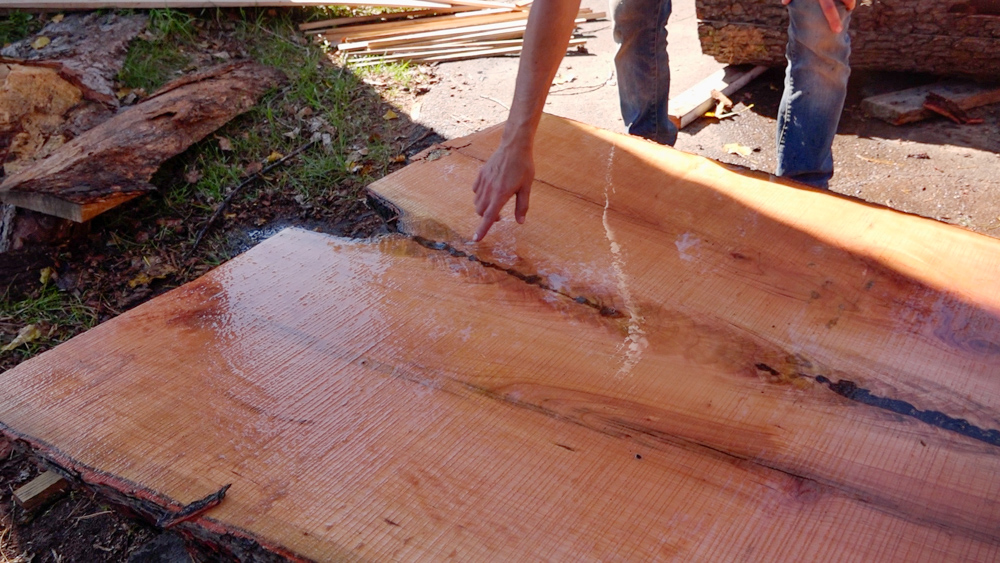 This cherry crotch has got some pretty ridiculous and incredible stuff going on. We are getting into some bark inclusion now, which I think makes things a little more exciting. It has some great figure and great color. 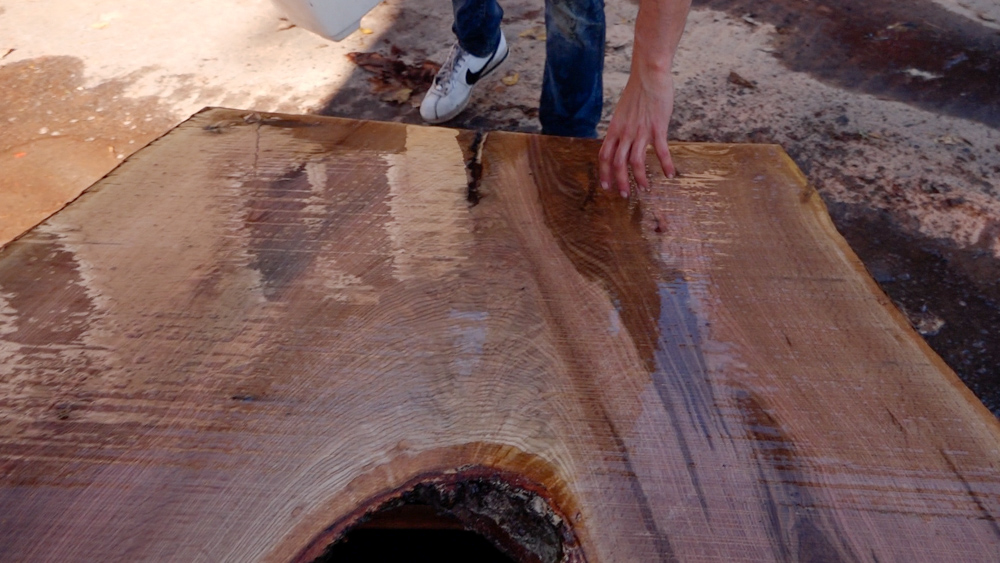 This is beautiful! We have some rot staining down here and towards the top there and a nice amount of crotch figure. And there’s quarter sawn grain on the outsides as well. 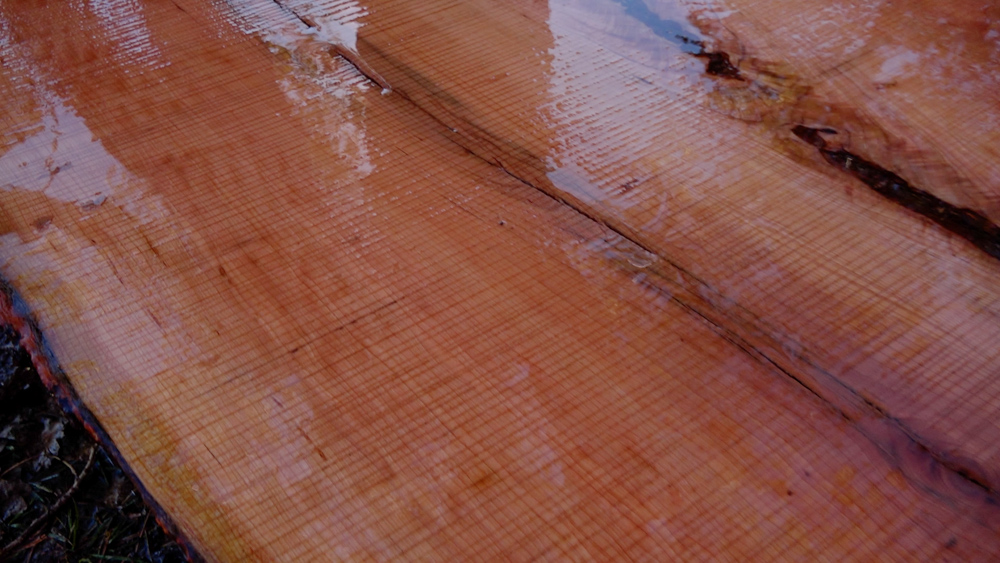 Oh wow! This has got some figure in it too. It’s very subtle, but there’s a little bit of a figure along the two outside areas of the log. A beautiful band of crotch figure at the bark inclusion in the middle. The deep heartwood is getting even more red. 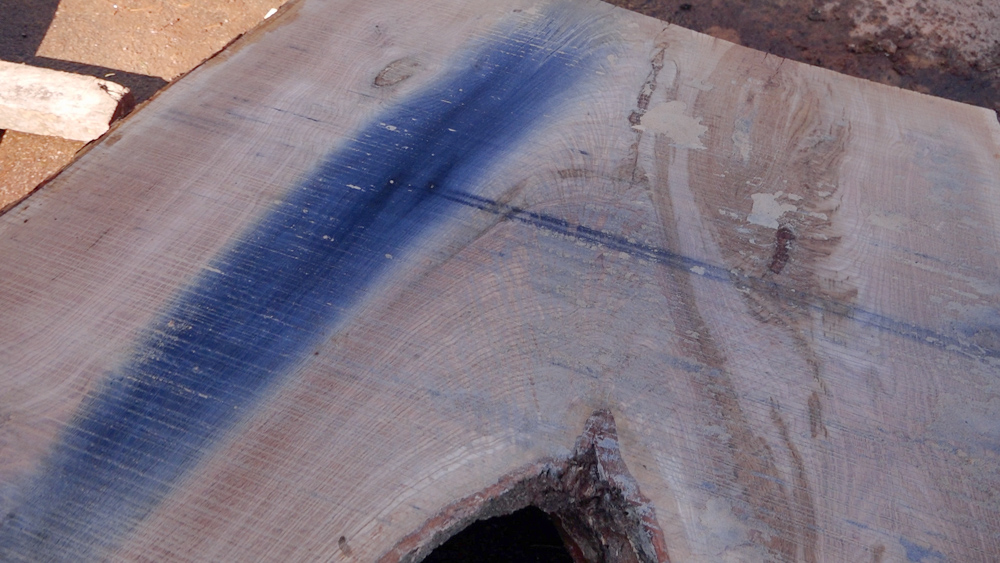 Oh wow, that’s a lot of blue staining! It’s so deep blue, look at that! That is some of the bluest blue stain I’ve ever seen. 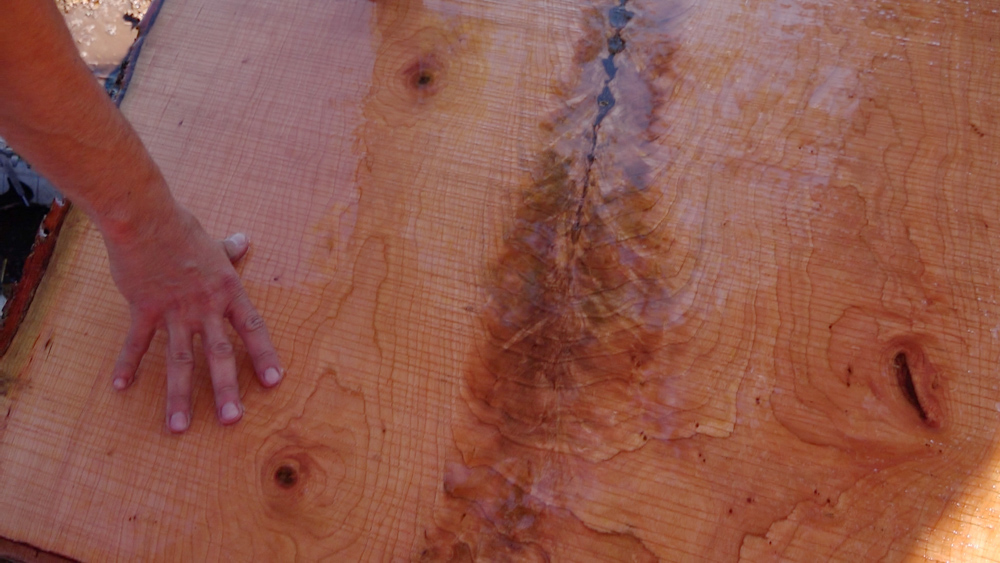 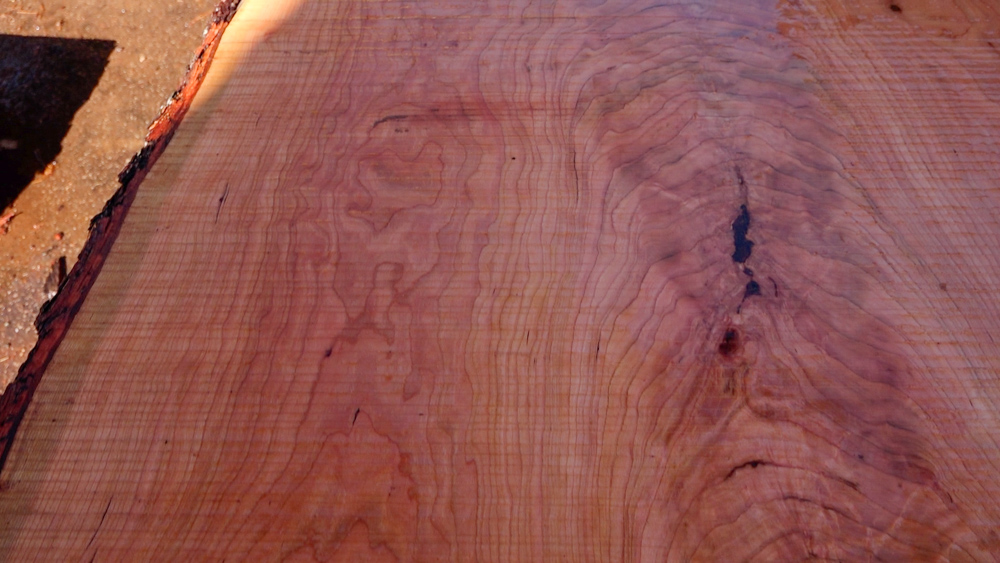 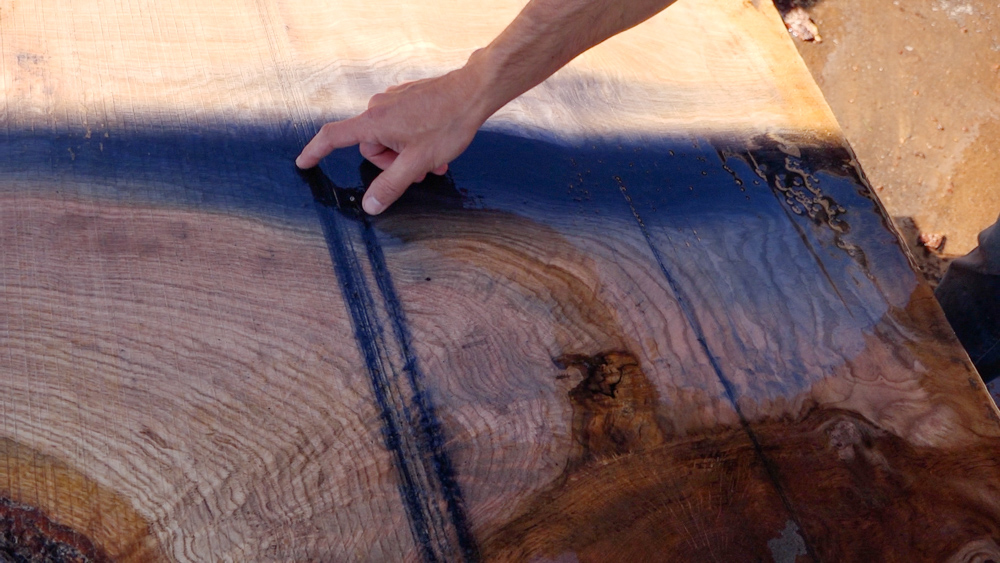 That blue is so deep; it’s gorgeous! These are two little nails. I’m really liking the blue stain. 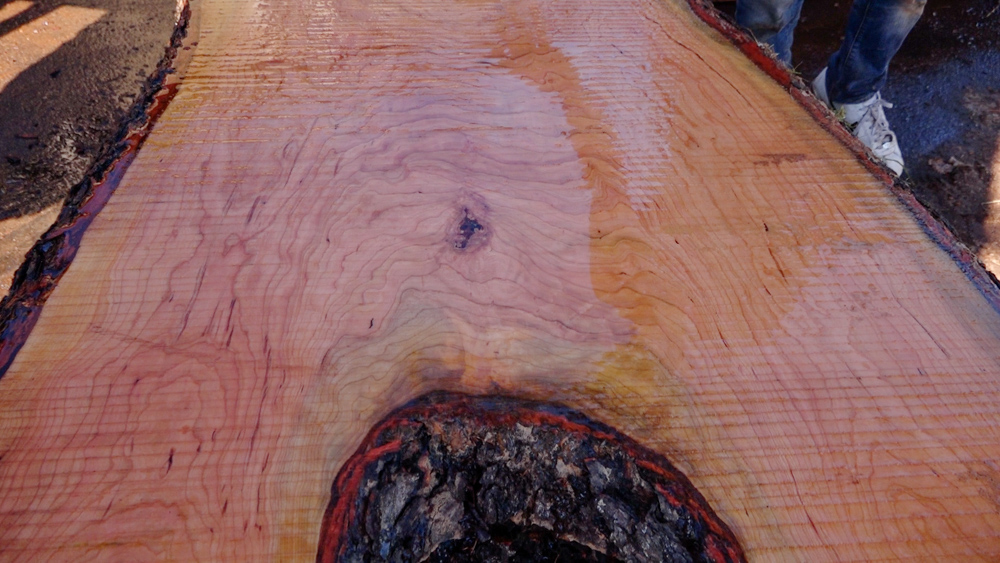 Oh… another the crazy grainy one! This is incredible. 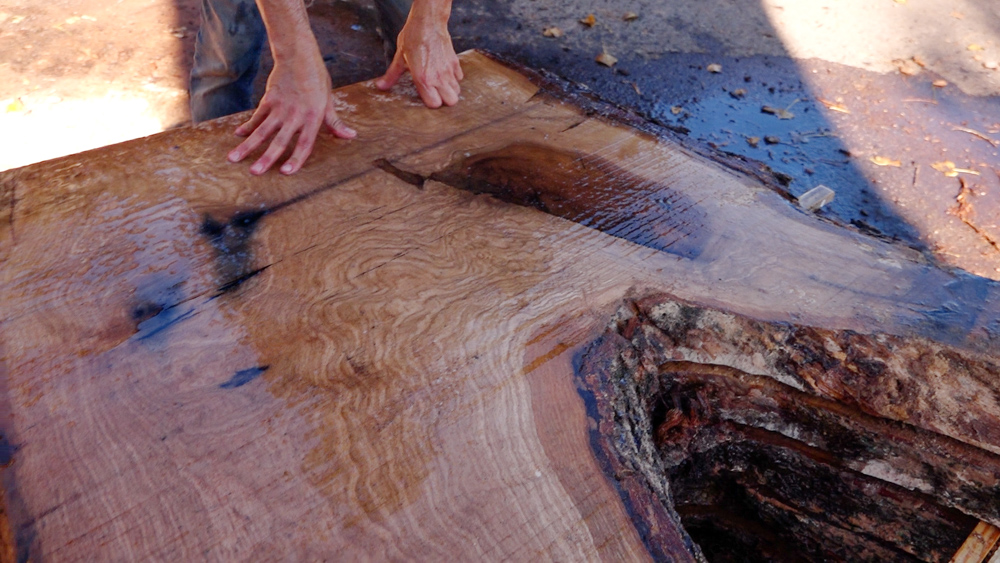 This must have been an old limb or something here. A little bit of stain from the two nails, and some normal swirly white oak. This is a cool little log. 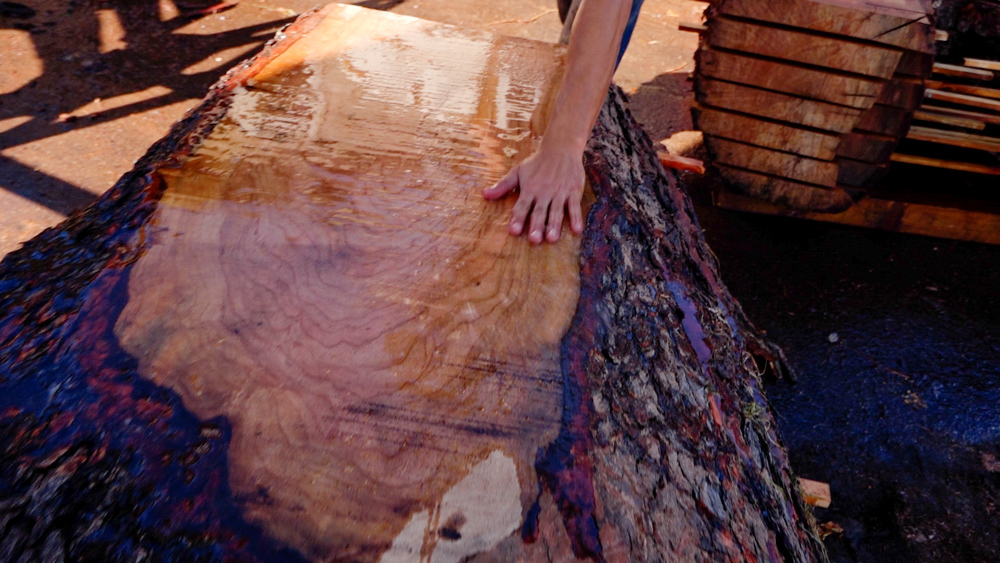 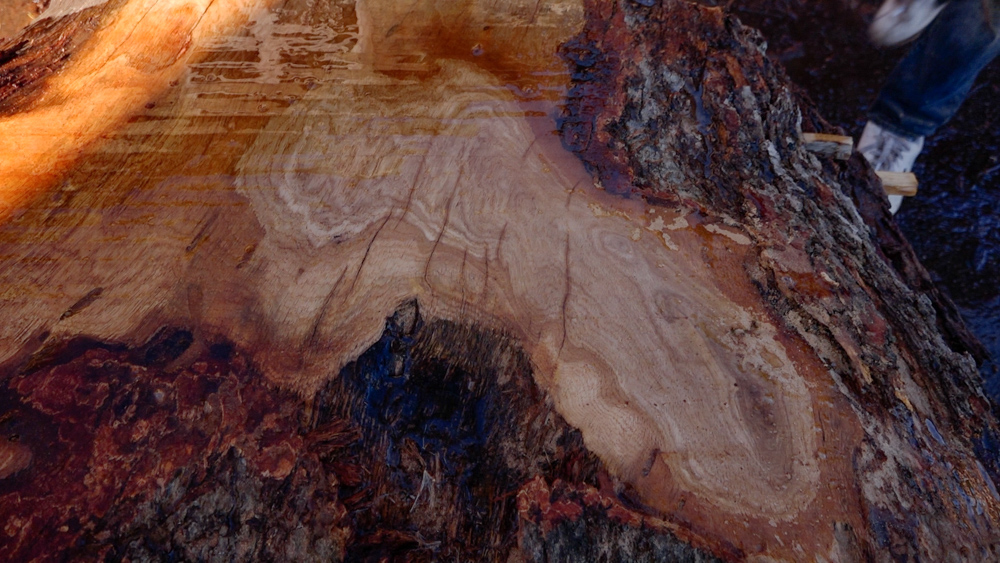 This is what it would have been like if there were no nails in this log. Although this is mostly sapwood, it still has a fun little section of grain through here. 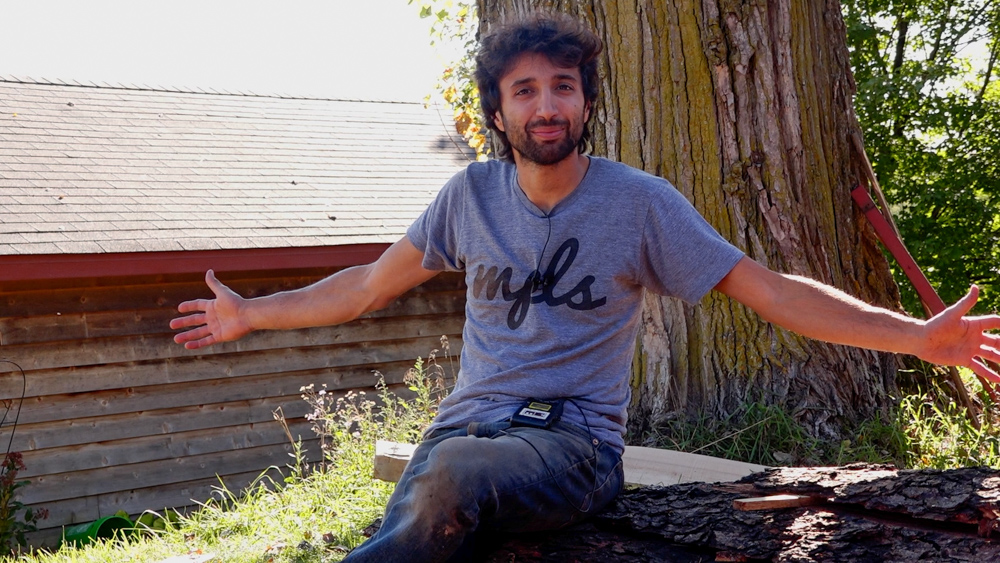 This was a fantastic day! I had a lot of fun out here, and it was a good way to kick off the official sawing of my own logs. It’s been a good day doing something I love! And after cutting this small section of the Iowa tree, I am very, very excited to see the rest of that tree all sawn up.

That’s going to do it for this one. Thank you as always for joining me, I greatly appreciate it. If you have any requests or comments on the saw mill or anything back in the shop, please feel free to leave me a comment. As always, I’d be happy to answer any questions you might have. Until next time, happy woodworking! 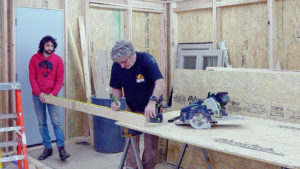 Starting on the Non-Structural Framing

Welcome back to our home renovation and remodel project. Last time was a little more disjointed because we were trying to figure out some things