The more I got into making my own lumber, the more I really needed a trailer.  For years, I had want my own trailer outfitted with a loading mechanism.  This mechanism is an extremely low cost option for loading and handling small and very large logs. 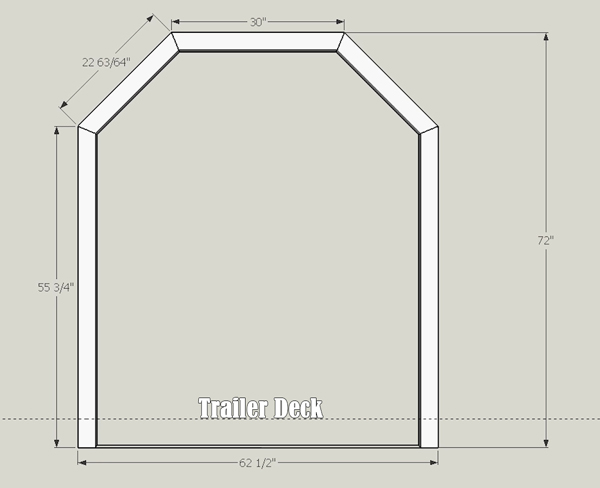 Before I got started, I used sketchup to plan the arch out.  I needed to determine the length of the arch pieces as well as the length of the legs which would determine how tall the arch would be.  I wanted to use the existing ramp mounts on the trailer so the width needed to fit within 63″.   I drew in some circles that would represent the largest logs I would probably find and at 4′ there would still be enough clearance through the legs so I made the height tall enough to accommodate a 4′ log plus about 18″ for the lifting motion. 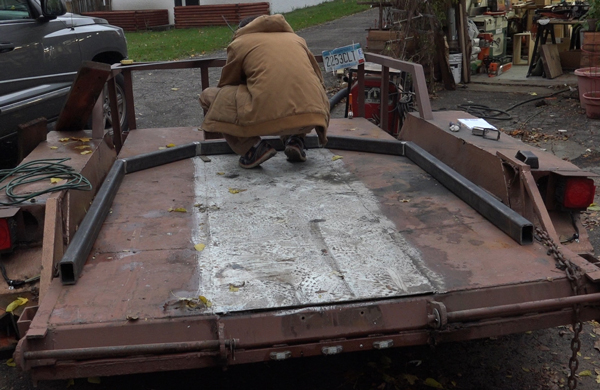 The arch is going made from 3x2x 1/4″ tubing and 4″ wide by 1/4″ thick flat bar.  I picked up 18′ of tube which was a few feet more than I needed and 8′ of flat stock.  The yard I went to sells these in 12′ sections so I got one 12′ section of tube and found a 6′ off cut.  I figured instead of paying a cut fee, I would just but the whole length and have some extra just in case.  The 8′ of flat stock was also an offcut and also a bit more than I needed but the same logic there.   The cuts on the ends of the arch member are going to be at 22.5 degrees and I started by cutting the legs since they were the largest parts.  Then I could cut the 3 sections that would form the arch.  Now I can work on laying them all out and getting the miters fitting correctly. I set the legs equal distance from the back of the trailer and measured between them at both ends to make sure they were parallel.  I adjusted the fit of any open miters with the grinder until the two pieces came together. 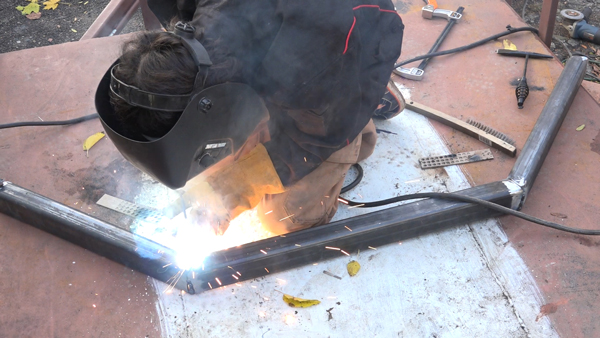 I started by just welding the arch section since the legs still need some work. 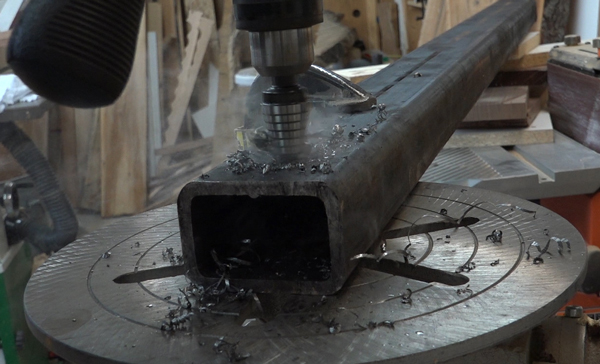 Next I focused on the legs.  They need to have a pivot hole drilled in them.  So I laid that out and started drilling.  I used twist bits up to 1/2″ to make the initial hole and then switched to a step bit to enlarge that hole out to 7/8″ 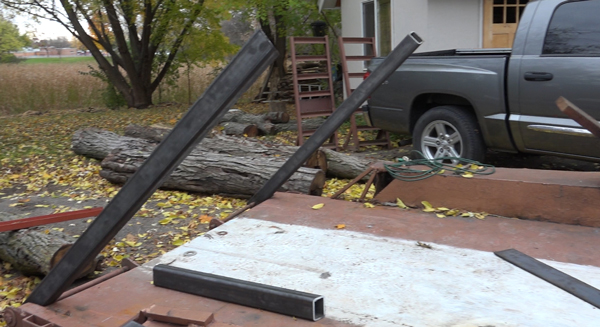 When I went to fit the legs onto the trailer, I discovered the angle that they were at when they contacted the back of the trailer was too steep and they stopped way too high above the bed.  Luckily, this was the only issue I encountered during this whole build. 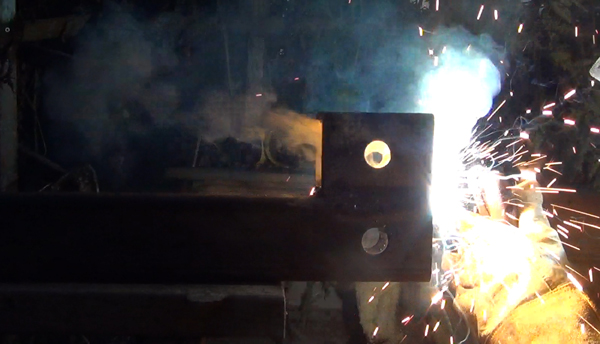 So I grabbed and extra piece of tubing that I could drill and attach to the leg to move the pivot point.  I went through the drilling process again and cut off a 4″ length.   Then I could weld those to the bottoms on the legs.  I got them tacked in place and to make the welding a little easier, I rotated the pieces and welded down the length of them.  I welded down both sides and went back to the first side again, cleaned the weld, and made a second pass.  And I also welded along the top and bottom. 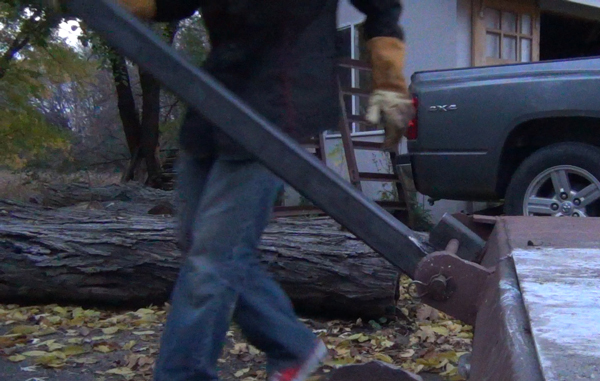 I mounted those on the trailer and could see if I made them short enough to clear the trailer as it is pivoting which looked good. 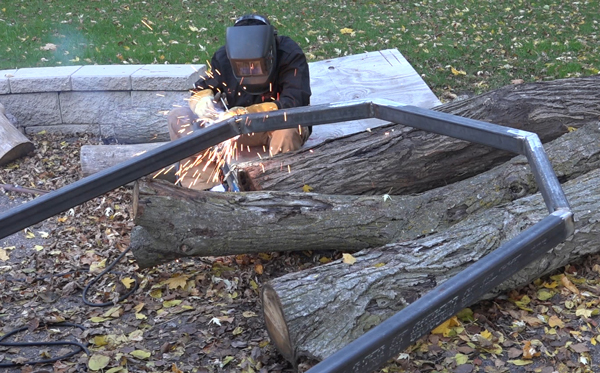 And now I can weld the arch to the legs.  To get to the underside and outside joints, I pivoted the arch off the back to make those accessible. 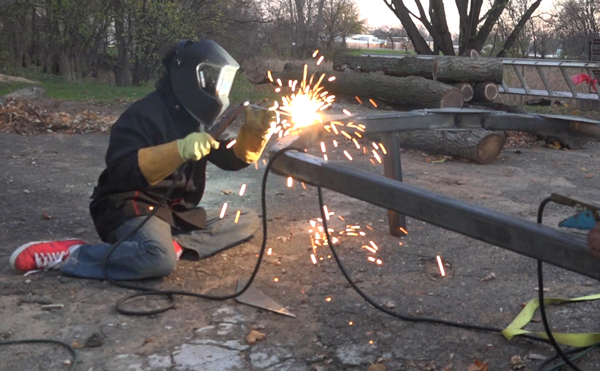 Now back to the gussets.  I picked up a metal cutting circular saw and I probably should have bought this when I started this project.  It cut this 1/4″ steel with no issue and was way faster than the cut off wheel on the grinder.  So I cut the rest of these gusset plates and then welded them onto the arch.  They are welded all the way around everywhere that was accessible to the welding rod.

Next I needed a place to mount the winch.  I’m going to create a mount that fits between the uprights of the front rails.   I could remove the paint from the area where the mount was going to go. 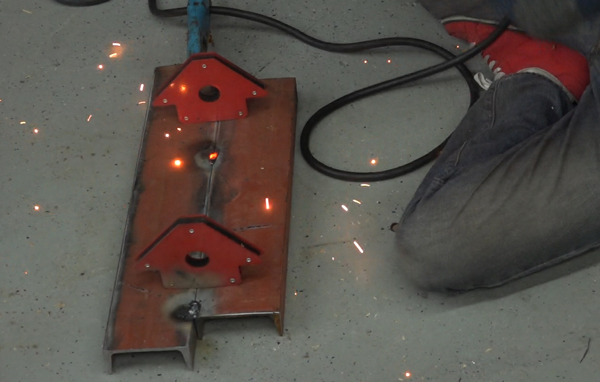 To make the mount, I’m going to use some of this left over channel that I used to fill in the center of the trailer in the last video.  I cut a piece that would span the distance between the angle irons and grabbed another shorter piece that was an offcut.  I cleaned those up, tacked them together, and then welded a full bead down the length of the joint.

I made a template of the hole pattern from the winch with a piece of paper and I could use that to mark the hole locations on the mount.  I positioned the template so the holes would be in far enough from the edge so there would still be room for the washers on the bolts.  And then I drilled the holes. 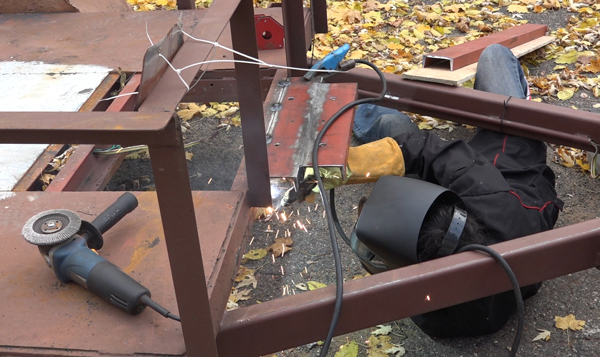 A few supports to hold the mount as I tacked it in place before I welded it the full length on the top and bottom.  I came back and flushed up the welds and broke the corners a bit. 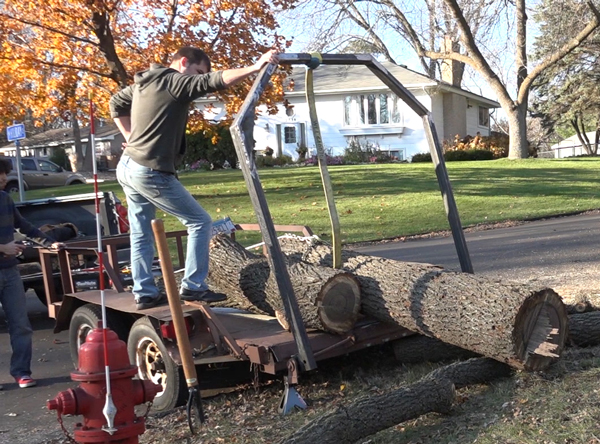 At this point I had a functioning lift system or so I thought. I took the trailer out to test it out.  Turns out one of the ramp mounts couldn’t handle the stress and sheared off.  I did a video on this outing: Picking Up and Slabbing a Walnut Tree 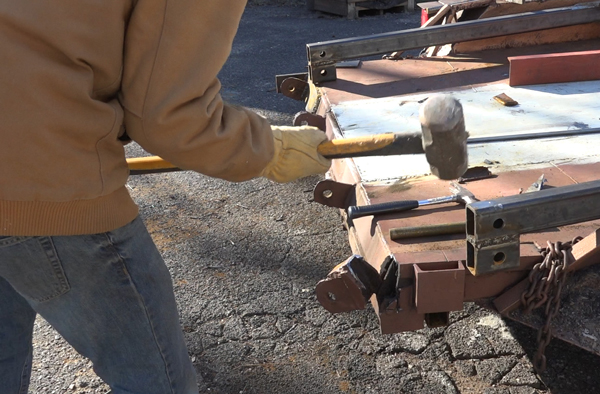 So I went back to work to make something stronger.  Much stronger.  First up was cutting off the mount from the other side.  I cut as much as I could and then switched to a hammer to break it off.  And sometimes in life, you need a bigger hammer.  I also had to remove the stake pocket.  Same thing here, cut as much as I can and switch to the 12lb sledge hammer.  Next I removed a bit of the angle to expose the inside of the trailer frame. 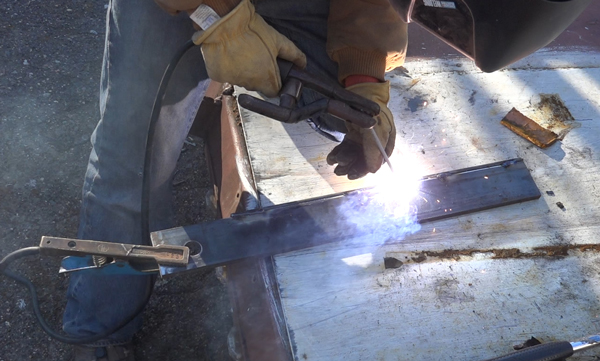 One half of the mount is going to be made from this 3″ wide by 1/2″ thick steel  about 2 feet long which will slide into the frame of the trailer.  I laid out the pivot pin hole and for this hole I tried a hole saw which worked really great.  I was able to drill this 1″ diameter hole in about 3 min. To make this thing a little taller, I welded a strip of 1/4″ steel to the bottom side. 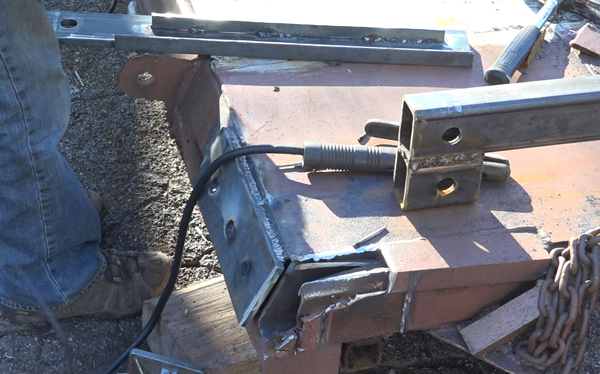 For the other half of the mount, I wanted to reuse the pivot block from the old mount.  So again, cut as much as possible and then it’s hammer time.  I made a mounting plate for that pivot block out of some more 1/2″ steel which could be welded to the back of the trailer. I temporarily installed the other half of the mount so I knew how far to the right it needed to go and then tacked it in place.  I welded along the top and side of it and I also drilled some holes in the middle so I could plug weld it as well. 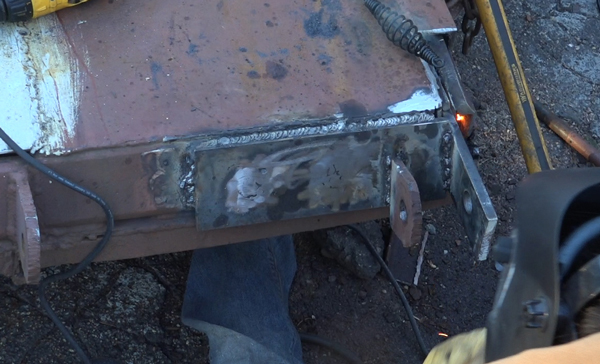 I attached another piece of that 1/4″ stock to the side of the mount to make it fit snuggly side to side.  I ground this piece down until the hole assembly fit into the frame.  Next I installed the arch and the new pivot pins so I could get everything aligned before welding the mounts in place.  The two 1/2 plates got welded together and I welded the outside mount as far back into the frame of the trailer as I could reach with the welding rod.  And I could replace the angle that I cut off. 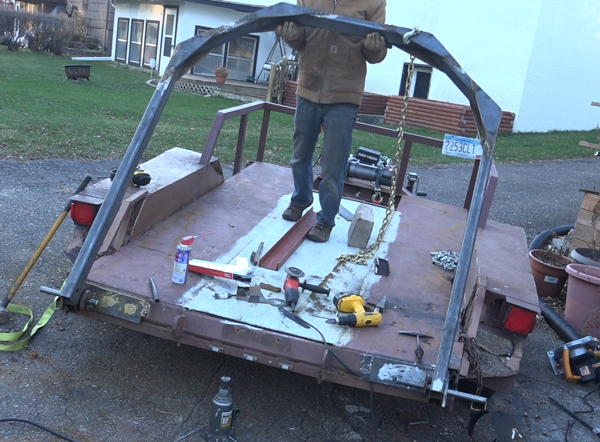 So now I could install the arch with it’s 1″ diameter pivot pins and the lift is functionally done.  I still have a few things I want to add like a hook for the chain and some shackle mounts to make hanging snatch blocks easier and then I can finally paint this thing.
Products Used:
Lincoln AC225 Welder: http://amzn.to/268Wzce
6011 Rods: http://amzn.to/1VukJdH
Metal Cutting Circular Saw: http://amzn.to/1T8jB9x
12000lb Winch: http://bit.ly/21cjsYx 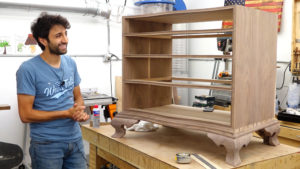 Guild Scholarship: https://thewoodwhisperer.com/scholarship/ Viewer projects Walnut Sideboard and Dresser by Andrew I cut 3/32 veneer from the slabs I got from you and glued them

We arrived at a beautiful, hilltop property basically in the middle of the city.  A lot of the damage from the prior year’s storm was 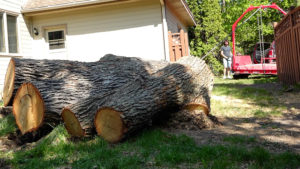 Picking up Logs for the Sawmill | Urban Logging

Today I have an urban logging pick up.  Grabbing these two pieces of white oak out of a side yard.  I’ll start with the bigger