I got a call about a walnut tree that was coming down and this was a really fun outing.  The loading was just a bit challenging which made it more interesting than just driving up to a pile of logs.  You know how I love a good adventure! 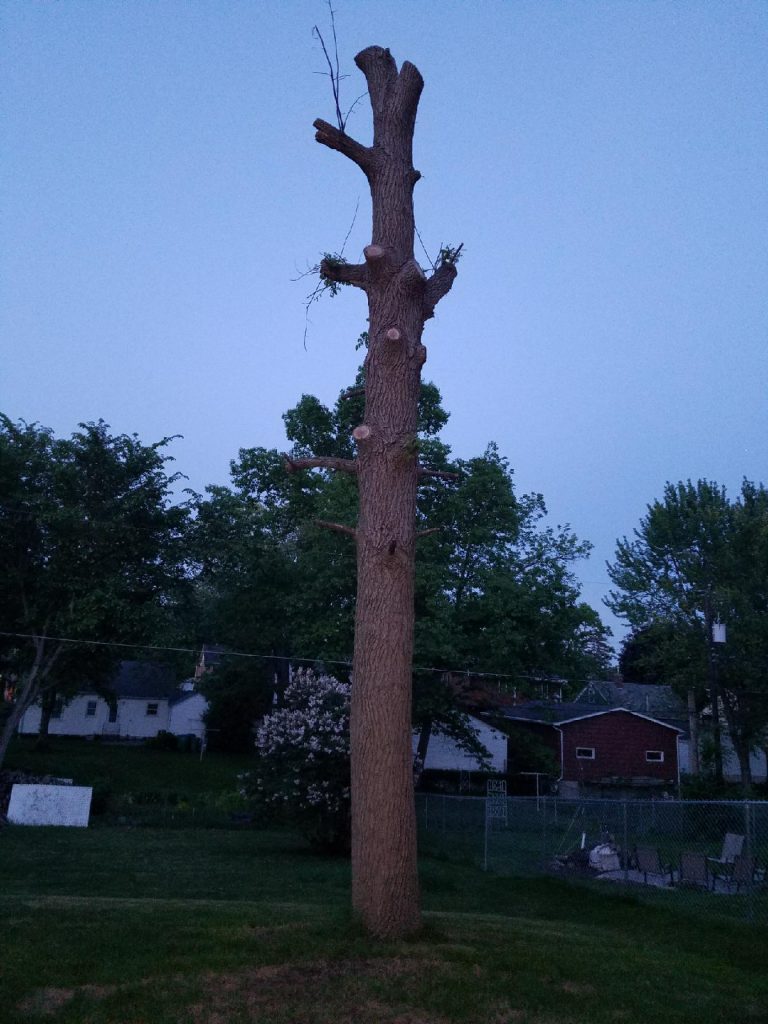 I received a call from a homeowner who was having a walnut tree removed in her backyard.  She was looking for someone who would be able to use the wood rather than just having the tree service haul it to the dump.  She found and reached out to the Minnesota Woodworkers Guild and they referred her to me.  She sent me the picture above of the tree which had been previously delimbed and was being dropped in a couple days.  She originally just offered the bottom 10′ of the log thinking that the rest of the tree wouldn’t be desirable but I offered to take the whole thing. (the upper section actually excites me more than the clear butt log). 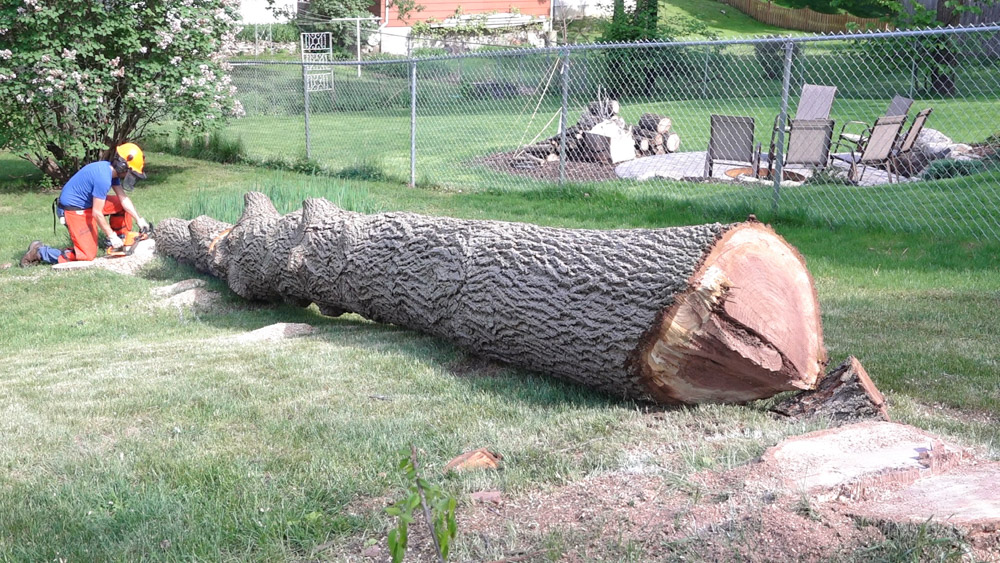 I arrived about an hour after the tree service had left.  They’d cleaned up the remaining short limbs on the upper section and left the log whole so I could cut it as I saw fit.  The homeowners had offered some wood to a friend to either turn or carve a bowl out of and they also wanted a small round for themselves to make a dish out of.  I cut the butt log to just over 10′.  The hinge area will likely need to be trimmed back which will make the final length right around 10′.  The bed of the trailer is also 10′ so the log will fit without hanging too far off the back.  That cut was right above some old limbs that had since healed over so the second log was where all the limbs of the tree connected to the trunk.  This should make some really interesting lumber with some really nice pockets of figure.  At the top of that 10′ section was a clear section before more limbs started again.  I pulled the bowl blank from this area.  It was the diameter requested at this spot.  This left a 5′ section with a decent looking crotch.  The limbs that would have been coming out of the top of the crotch were 12″ in diameter which was the size requested for the dish.  I cut two 2″ thick cookies off the top for the homeowners to make a dish from. 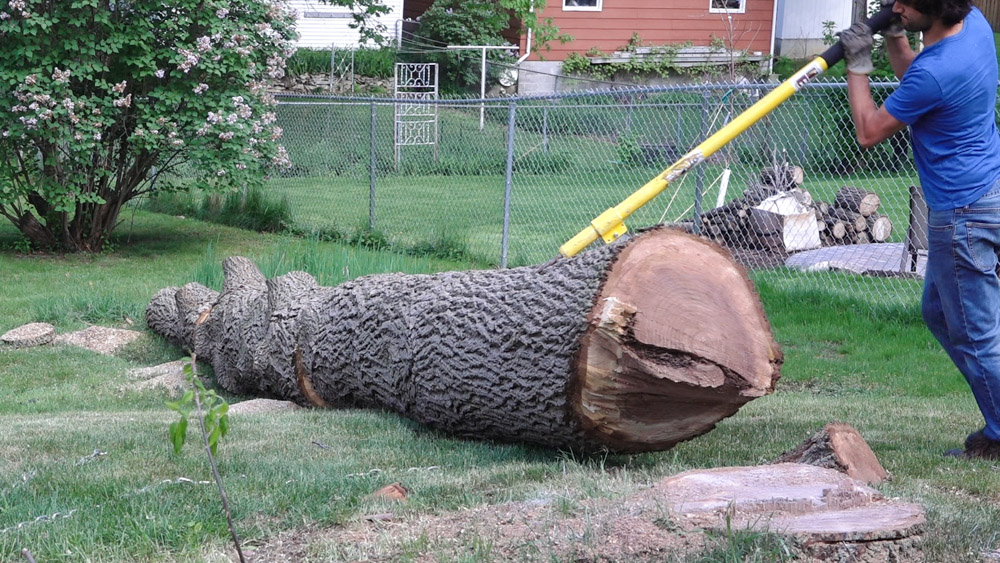 With the cuts made, I could start the process of getting the logs up the hill and positioned behind the trailer for loading. 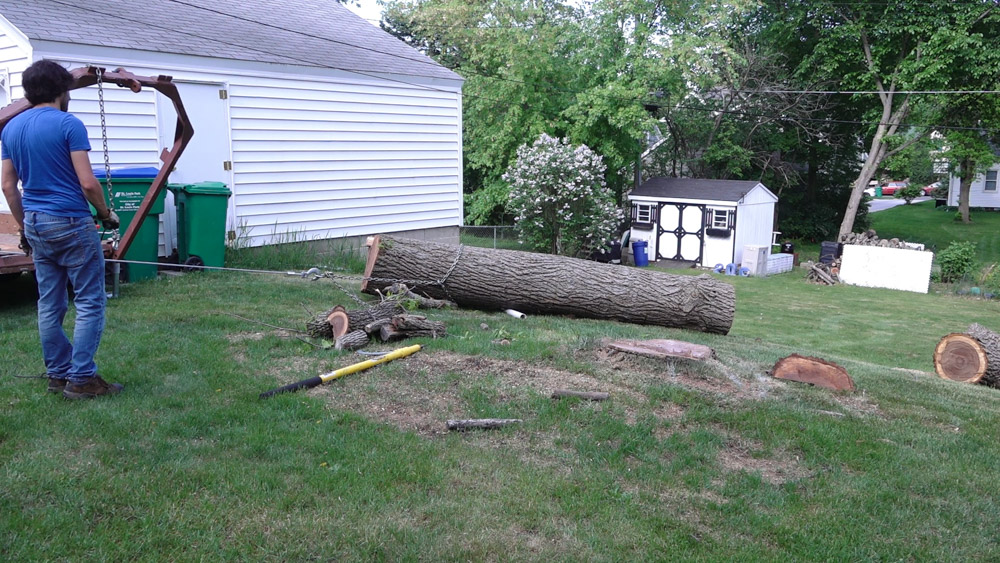 I used a block to redirect the winch cable about 45 degrees to drag the log to the trailer.  For both the logs I did what I could to minimize damage to the lawn.  I placed logs and rollers underneath to keep the logs from dragging.  The butt log made it up the hill with little damage but the knobby log was a lot more troublesome. 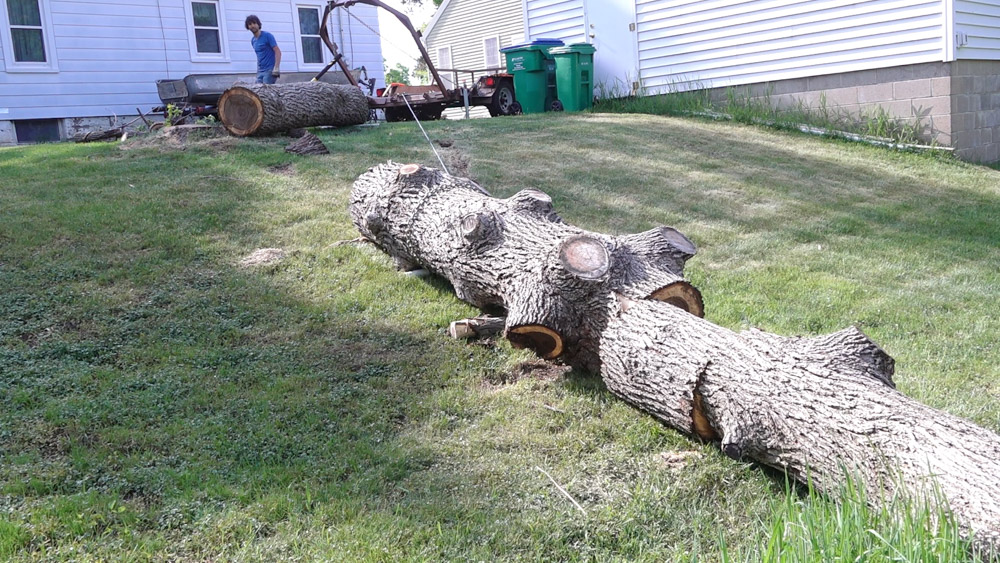 Starting to pull the second log up the hill.  In this shot you can also see the bowl blank that I cut. 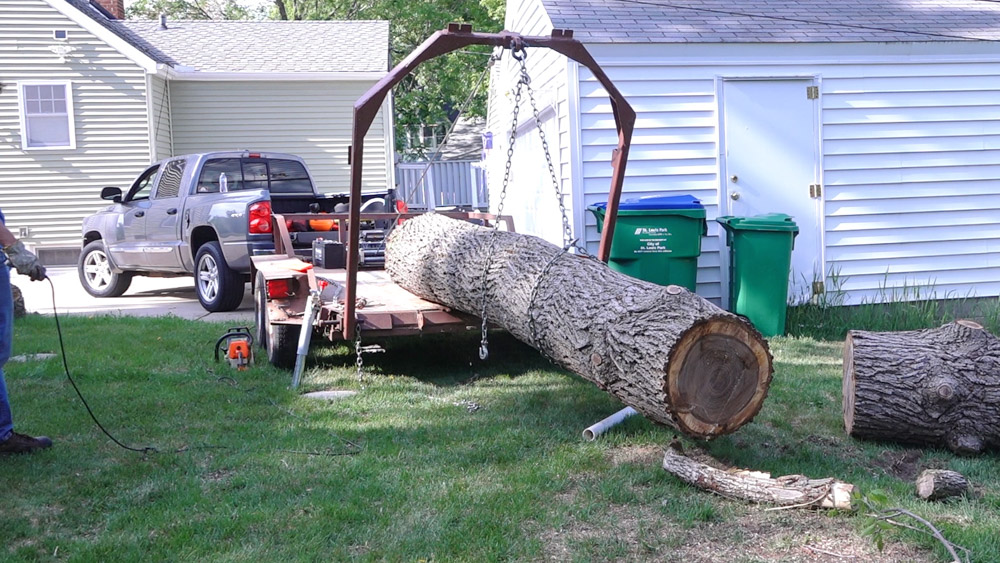 With the logs sort of in position I could switch the cable to the arch to start the loading process.  The butt log was very easy and straight forward since it was pretty close to cylindrical. 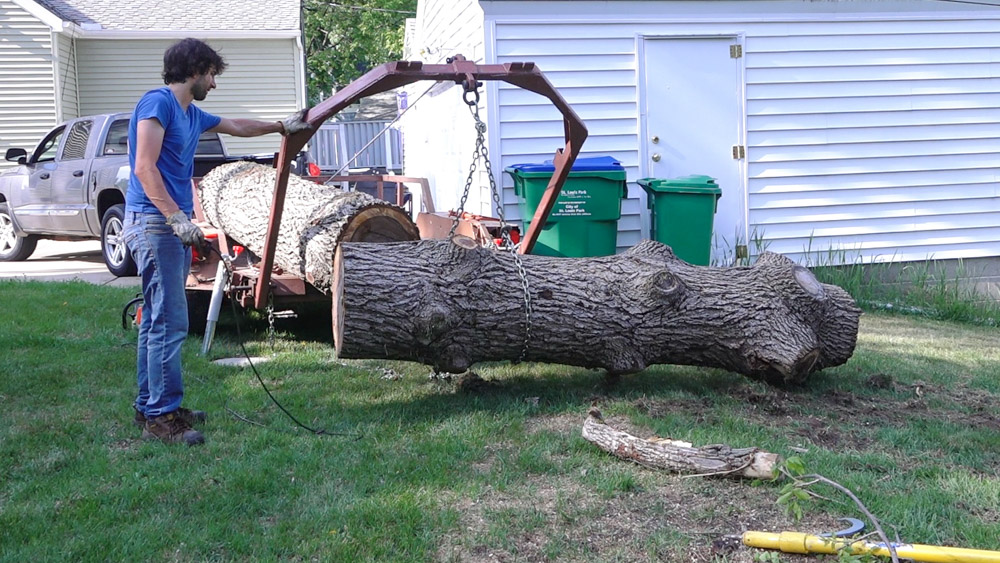 The second log came up to the back of the trailer at the wrong angle so the first step was to turn it about 90 degrees so it was parallel with the trailer.  I chained it short so I would have a lot of lift. 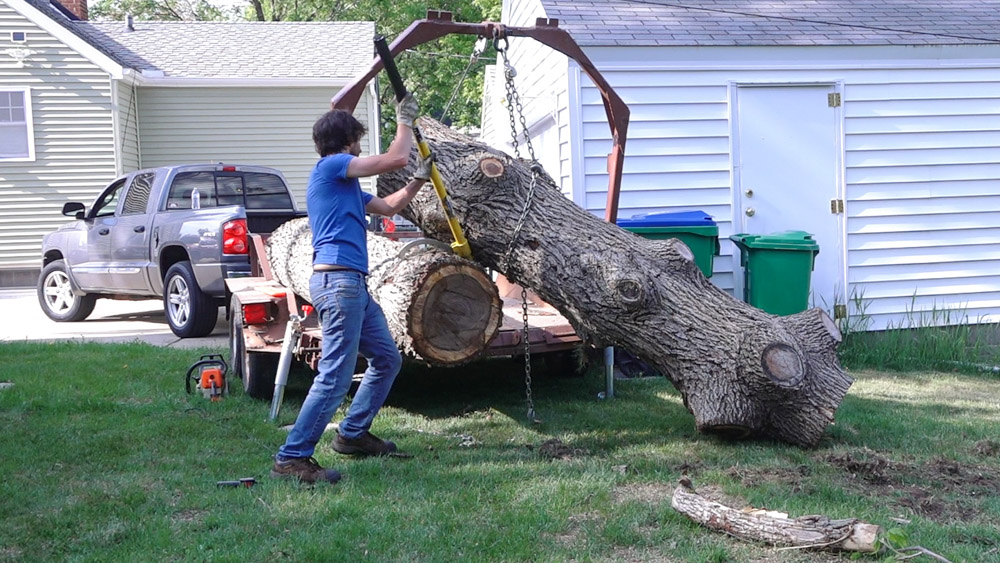 I was able to set it on top of the butt log and nudge it over into the correct position.

The last step is to pull the logs fully onto the bed which is done by hooking the winch directly to the log and pulling them forward the last 2 feet.  Again the butt log went easily but the knobby one kept getting caught on everything as it went so there was plenty of adjusting to do with the peavey as I went. 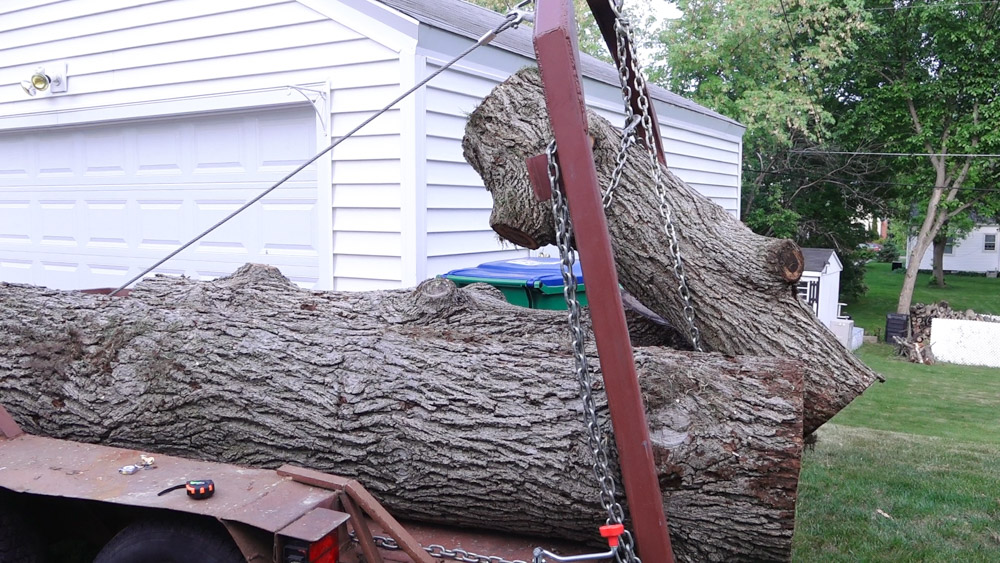 Last up was the small section from the top of the tree.  I really didn’t feel like unspooling the winch again so I tried rolling or flipping it up the hill.  Realizing that this little log is much heavier than it looks, I set up the winch again and skidded it up the hill.  I chained it short to the arch so it would be lifted above the other logs and dropped it on top.  Total time onsite was 2 hours which included time before starting and after loading chatting with the homeowners which is honestly my favorite part. 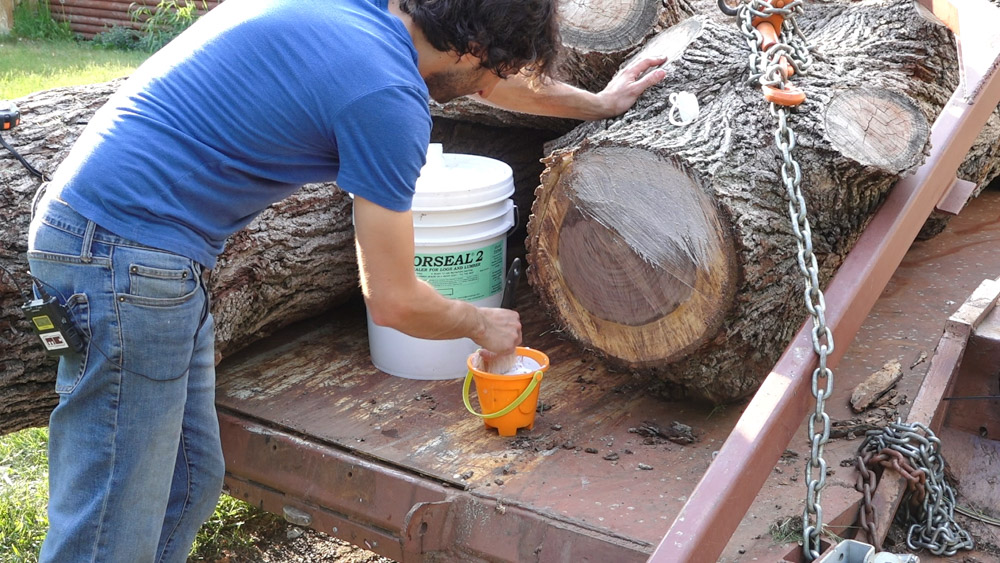 After a short drive back home, I could seal up the freshly cut ends with anchorseal to keep them from drying out and cracking.  I’ll be unloading these and setting them aside for a bit while I finish getting the mill put back together which is still on my todo list since I took it apart last summer to paint it. 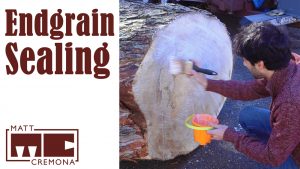 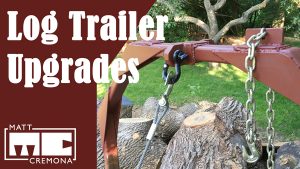