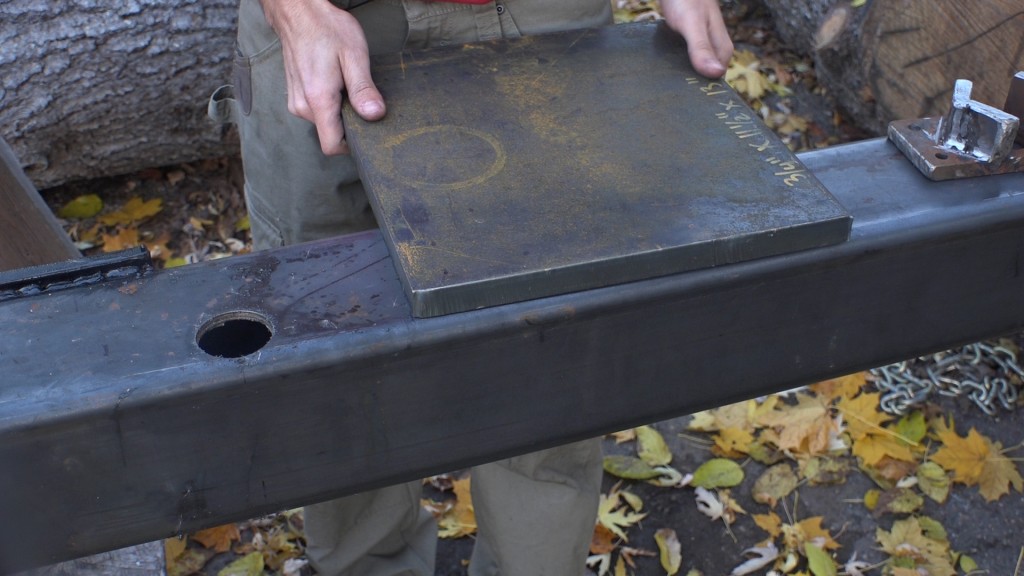 The bearings for the drive shaft are going to mount to a 3/4″ plate and I’ve laid out the center of the bearings so that the drive wheel will not be within the interior of the carrige.  The drive shaft is long enough so that the drive pulley will clear the back side of the center upright of the carriage so the mounting plate will need to extend off of the back of the beam.  I’ll be adding an off cut of the beam stock to the back side to help support the mounting plate. 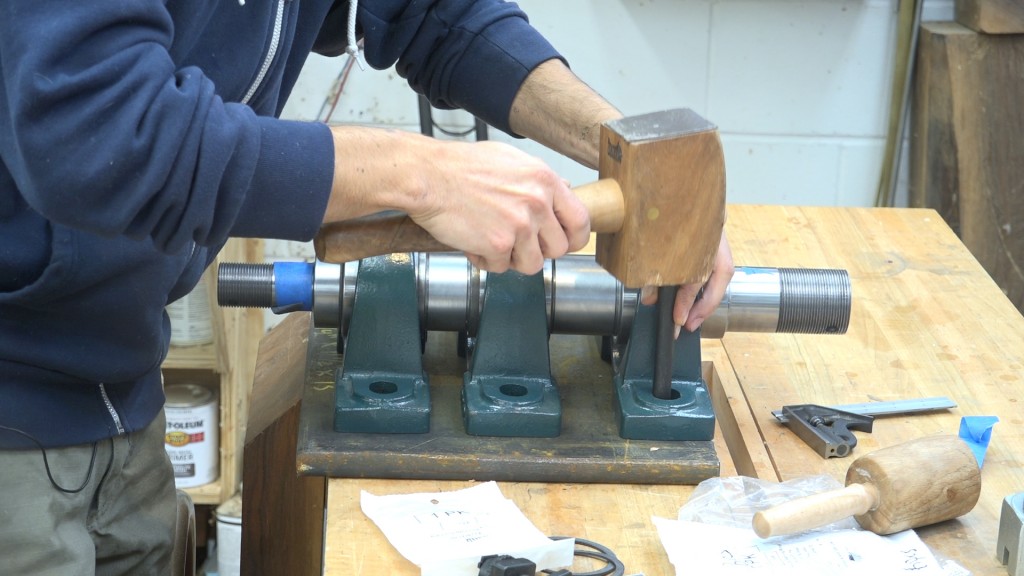 I installed the shaft into the bearings and aligned the bearings so they were aligned.  This isn’t entirely necessary since the bearings themselves are self aligning however for aesthetic reasons, I wanted the blocks to look somewhat aligned.  There is still the issue of vertical alignment but I’ll get into that later.  I had grooves cut for snap rings into the shaft to make positioning the bearings easier.  When I do the final install, I’ll use a combination of the snap rings and lock collars to hold the shaft in position.  I’m starting by transferring the hole locations for the first bearing. 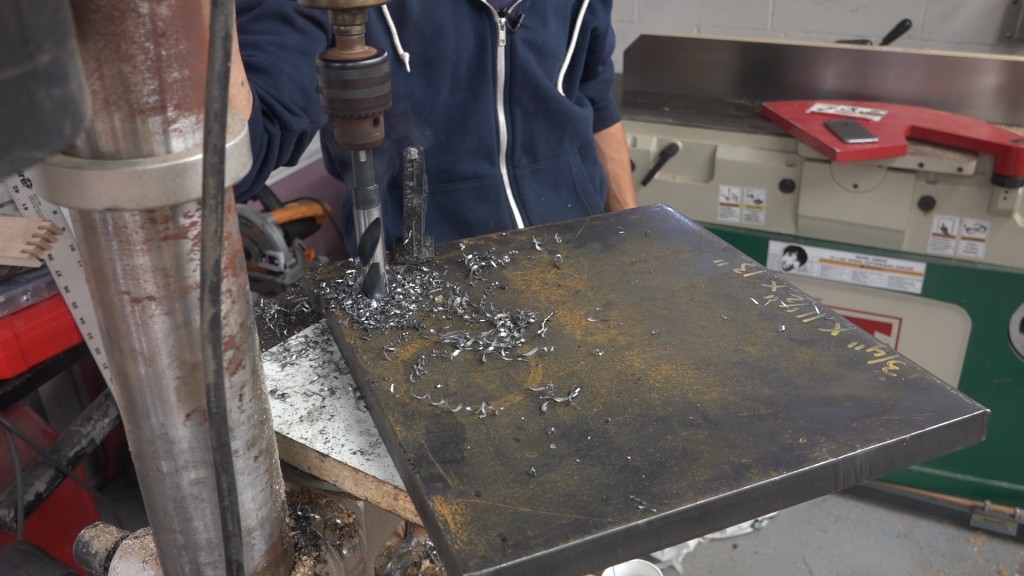 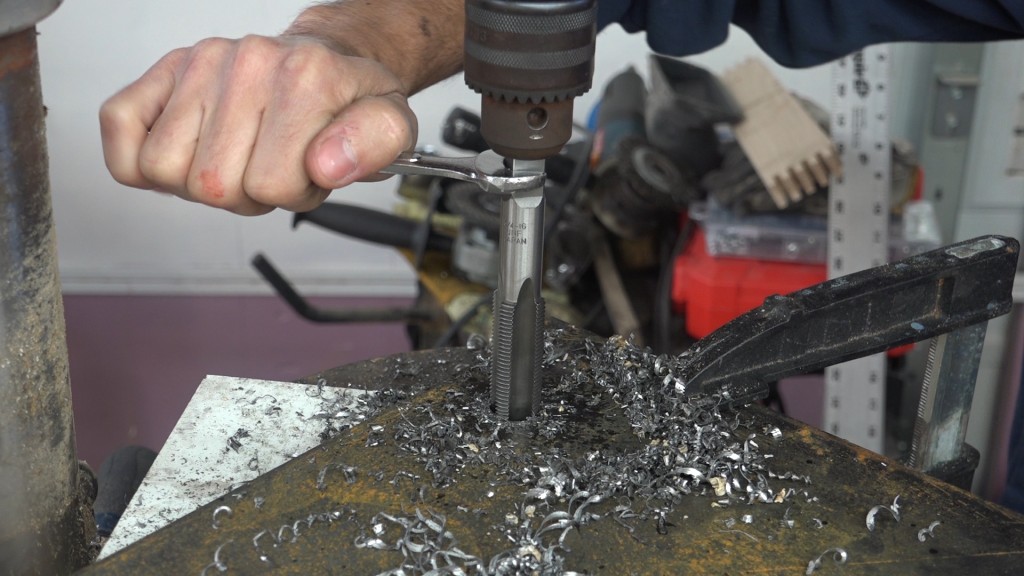 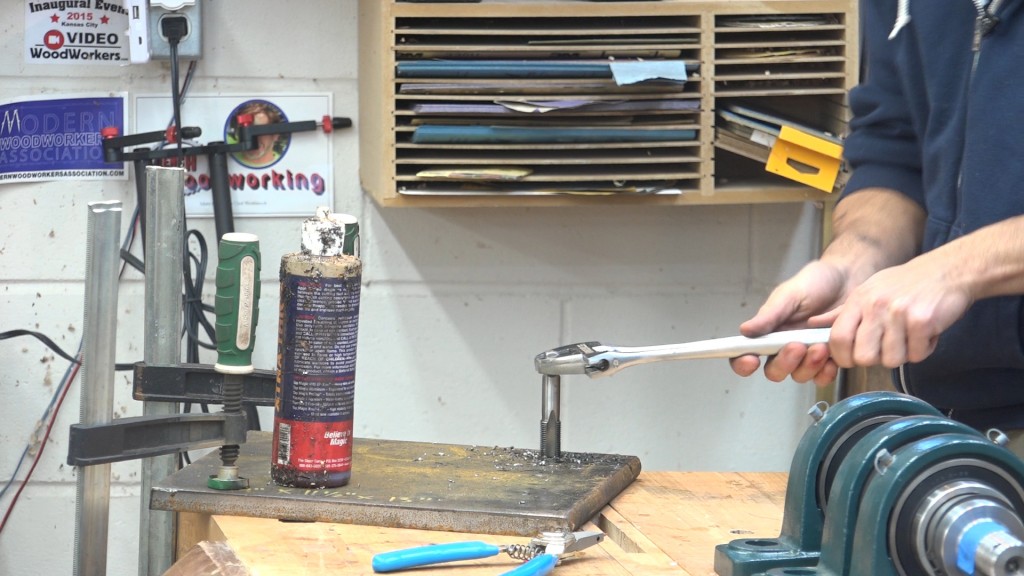 Once the tap was sufficiently started I clamped the plate to my workbench to continue tapping the hole.  An adjustable wrench gave me enough torque to turn the tap. 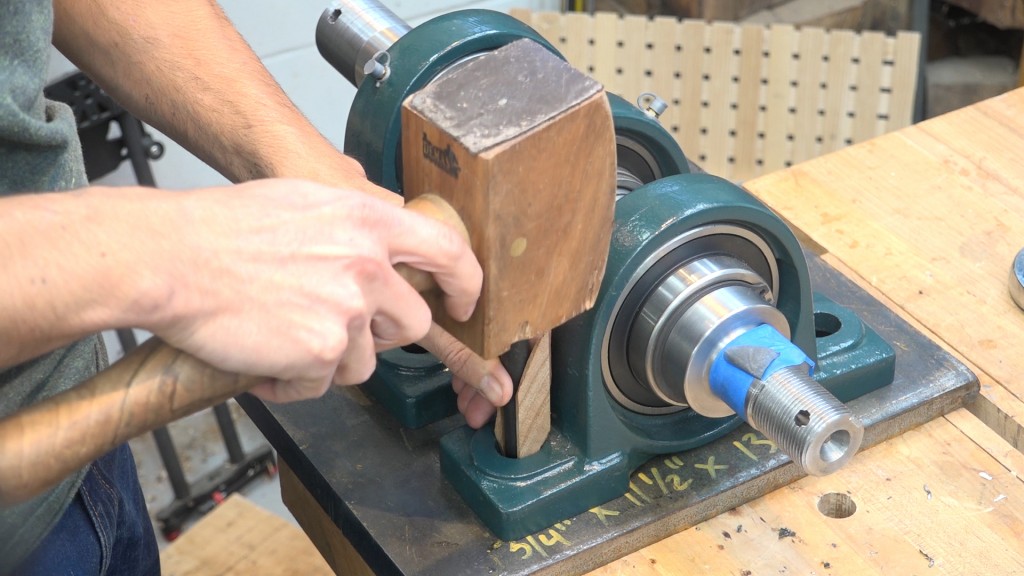 Now I can transfer, drill, and tap the holes for the back bearing.  Once those bolts were installed, I moved onto the center bearing. 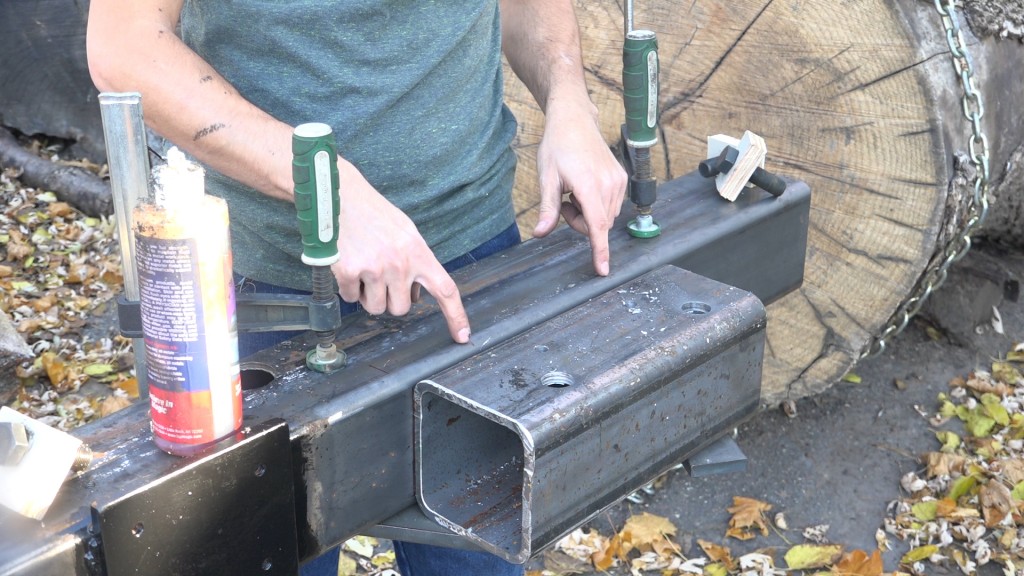 To help support the mounting plate, I cut a section of 5×5 tube that I could weld onto the beam.  I drilled two holes in it so it could be plug welded to the mounting plate and drilled two additional holes so the bolts could pass through.  I’m also going to need clearance areas for the front and center bearings.  Since these clearance areas don’t need to be anything fancy, I just used my welder to melt away the steel.  I was originally going to weld the mounting plate on and continue the tapped holes through the beam but I decided against that for fear of messing up the threads I already created in the plate while drilling the pilot holes. 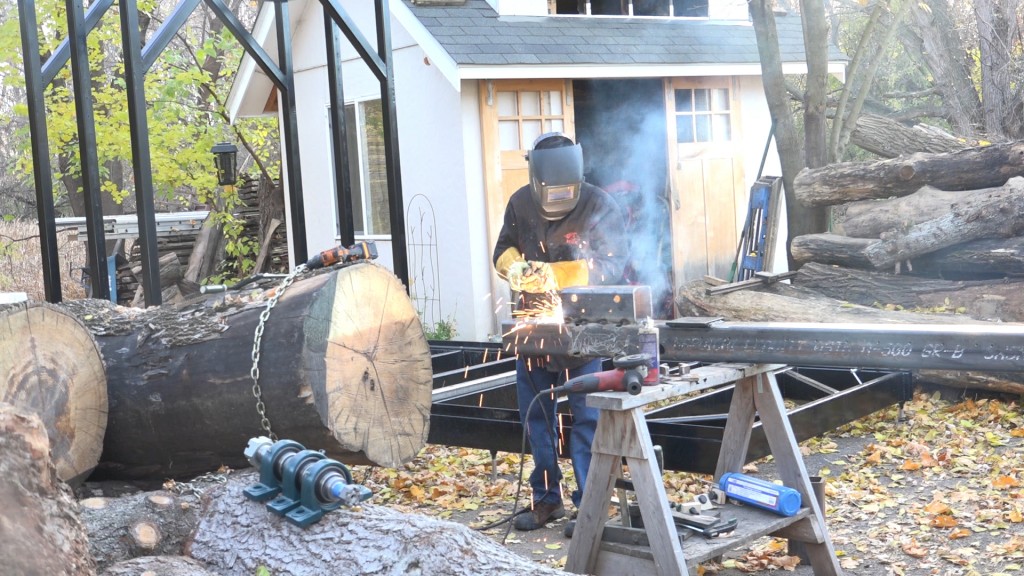 With all the prep work done, the extension can be welded on. 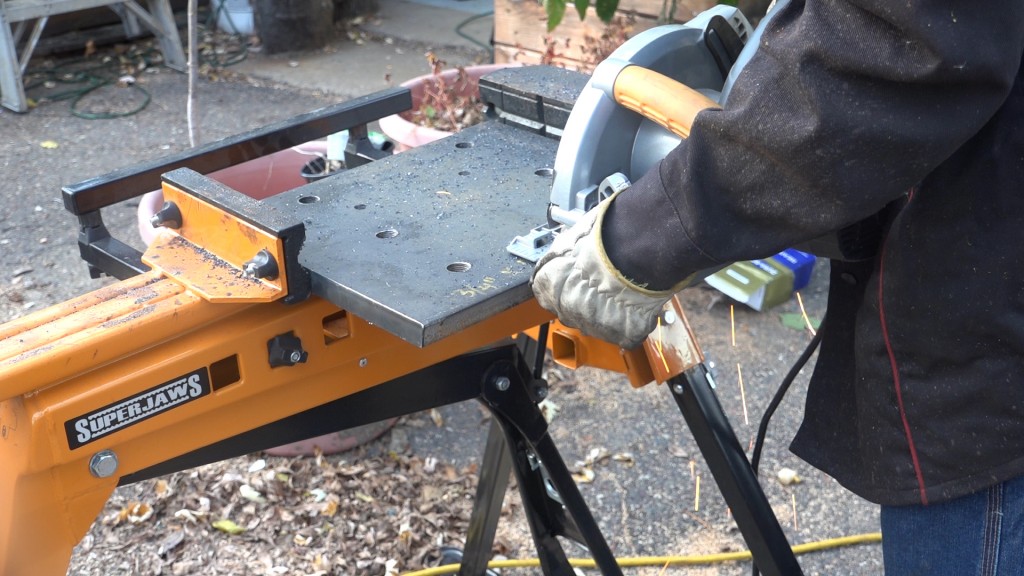 The mounting plate ended up being about 1/2″ too long so I cut it down with my circular saw.  This gave the needed clearance in the back for the drive pulley. 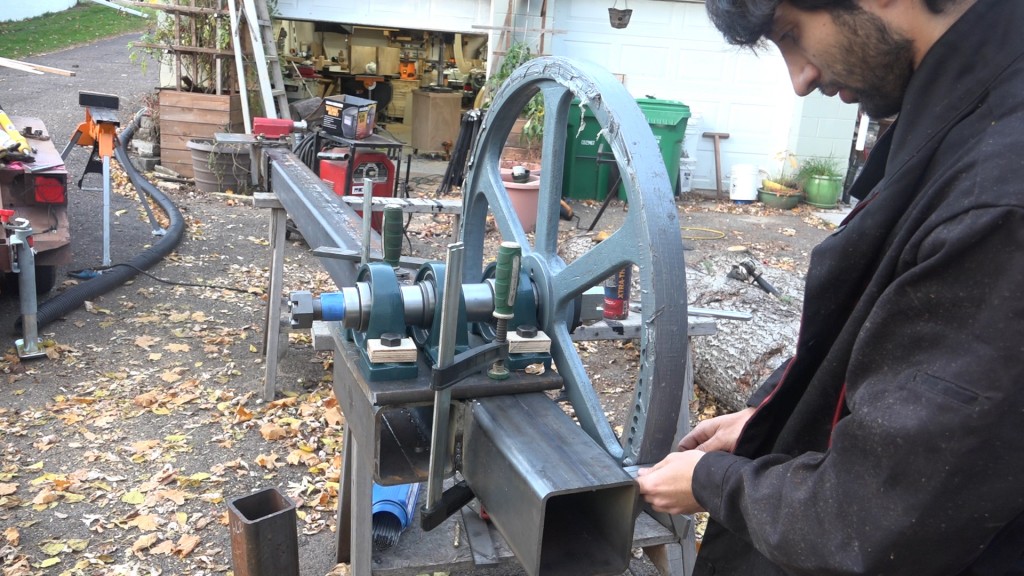 I bolted the bearings to the plate and mounted the wheel.  I checked the alignment to the beam so I would have less adjusting to do later.  It was off by about 1/4″ at the extents of the wheel.  I nudged it until the distance off the beam matched on both sides. 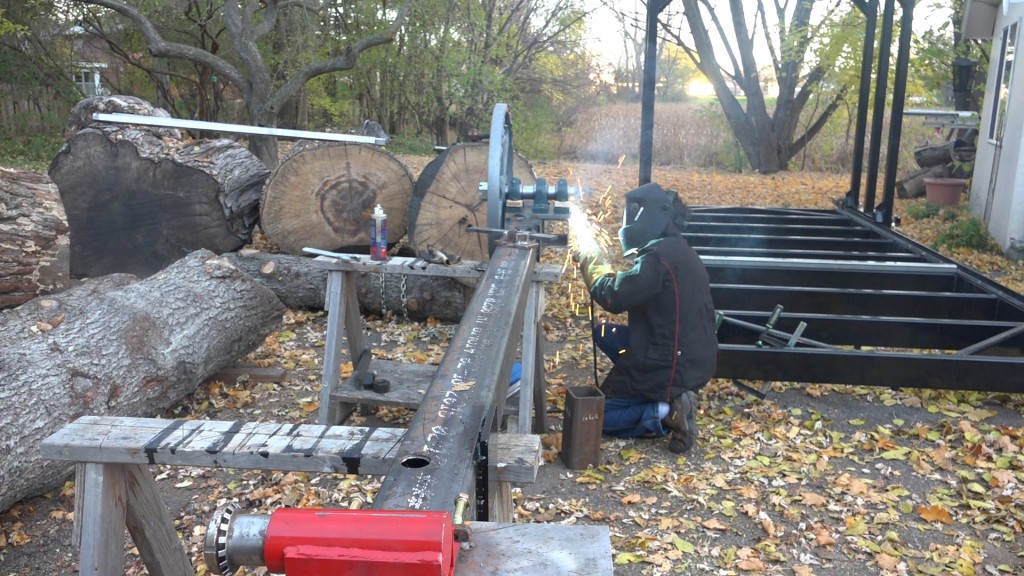 After some hesitation, I tacked the plate into position. 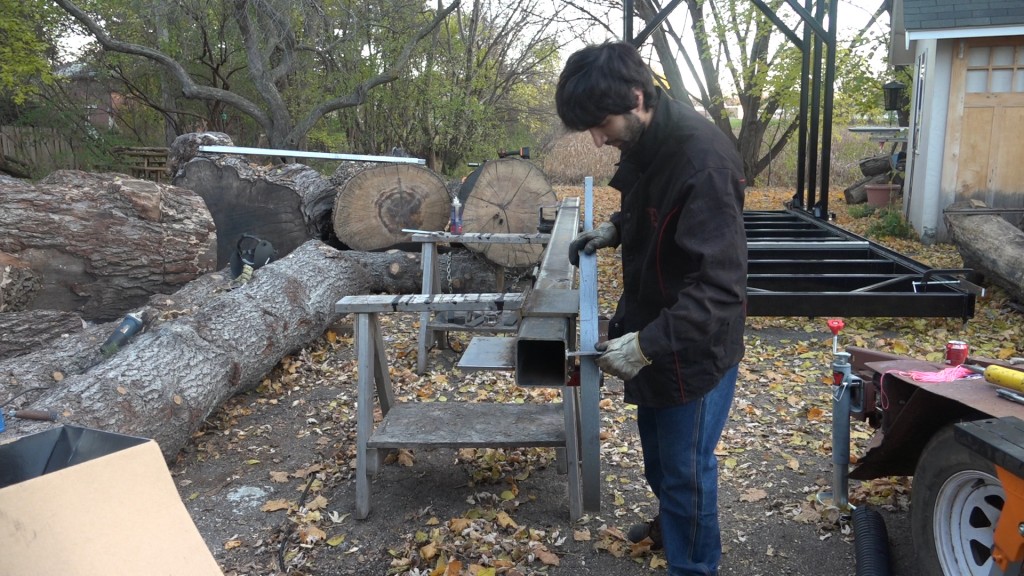 Before completing all of the welds, I flipped the beam and installed the idle wheel.  I wanted to confirm that both wheels were the same distance off of the beam or at least within the range of teh build in adjustability.  The idle wheel is currently ~1/16″ further forward which I can easily adjust. 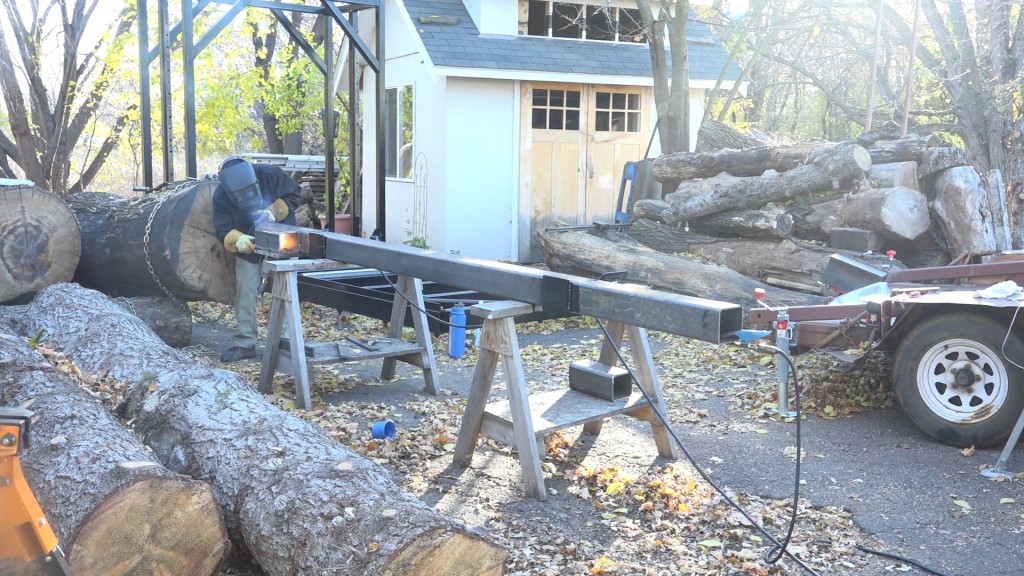 Confident that everything was going to work, I completed the welds. 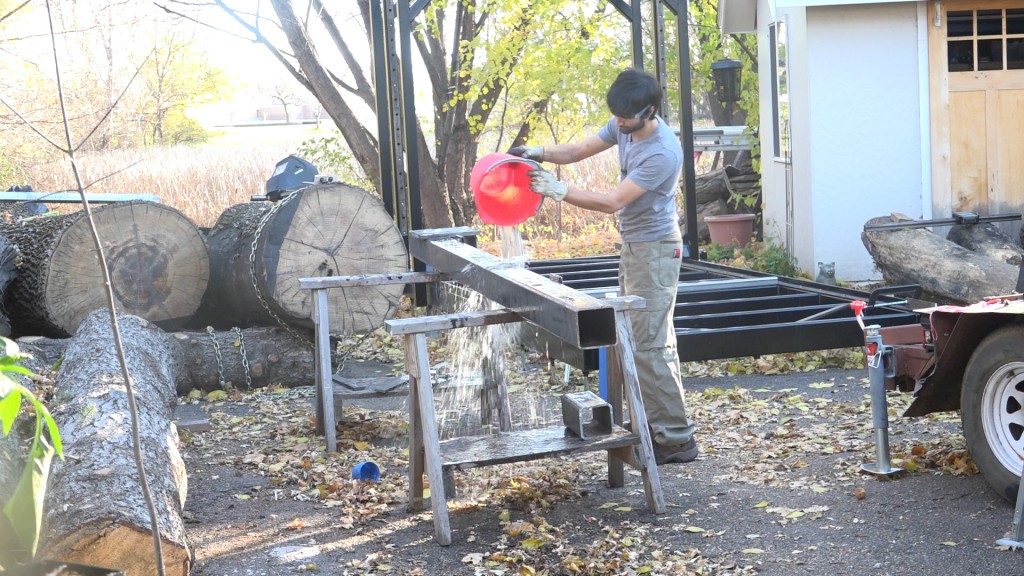 While the plate area was cooling, I degreased the underside of the beam where I had drilled all the holes for the linear rails.  It’s much easier to do this now before the beam gets turned upside down. 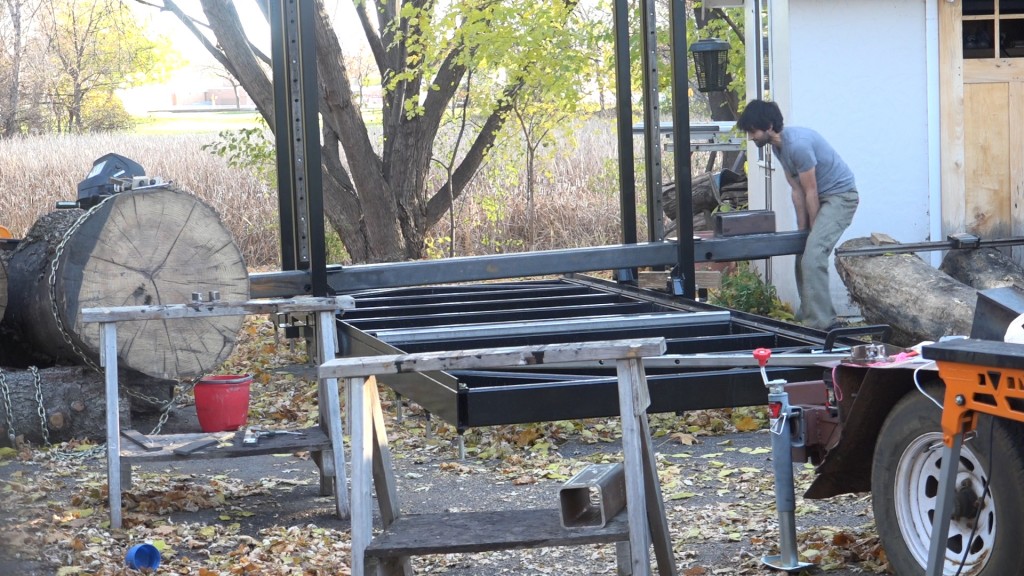 Now the beam weighs over 200lbs and can be replaced on the carriage. 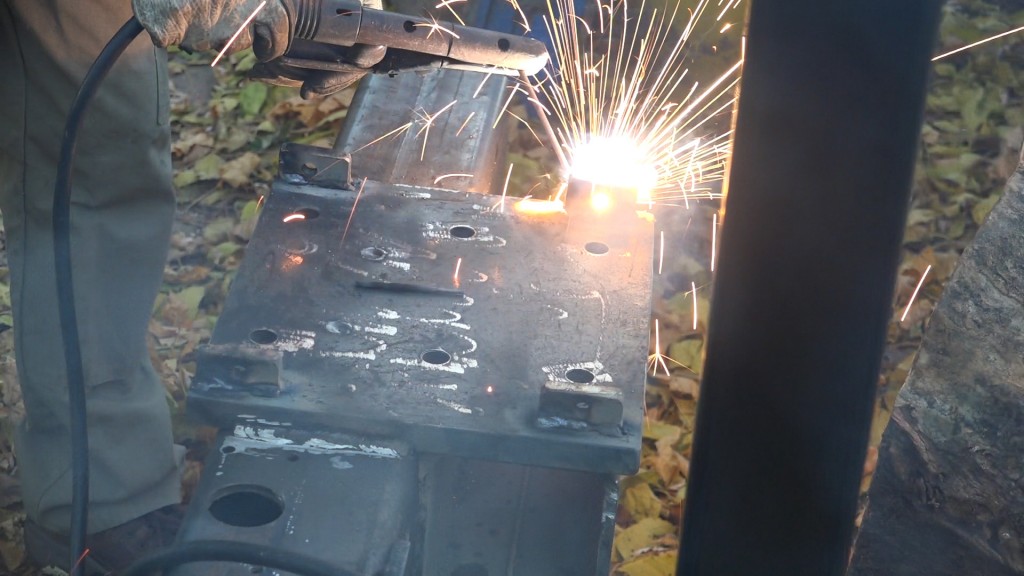 Before I forget, I added teh adjuster blocks to the plate.  Since I did get the wheel aligned, I likely won’t use these much but leaving a bolt installed will help to further strengthen the pillow blocks’ position and keep them from sliding as all the tension load is applied.

Before rotating the beam and reinstalling it onto the linear rails, I added all of the stuff to the underside of the beam.  I installed the drive shaft assembly, just lightly bolting the front and back bearing for now.  The bearings will have to be shimmed later so the two wheels will be aligned.  At at point I can also address the alignment of the center bearing.  The mounting plate could be out of flat or the bearing could have been machined slightly differently so bolting the middle bearing down could bend the shaft. 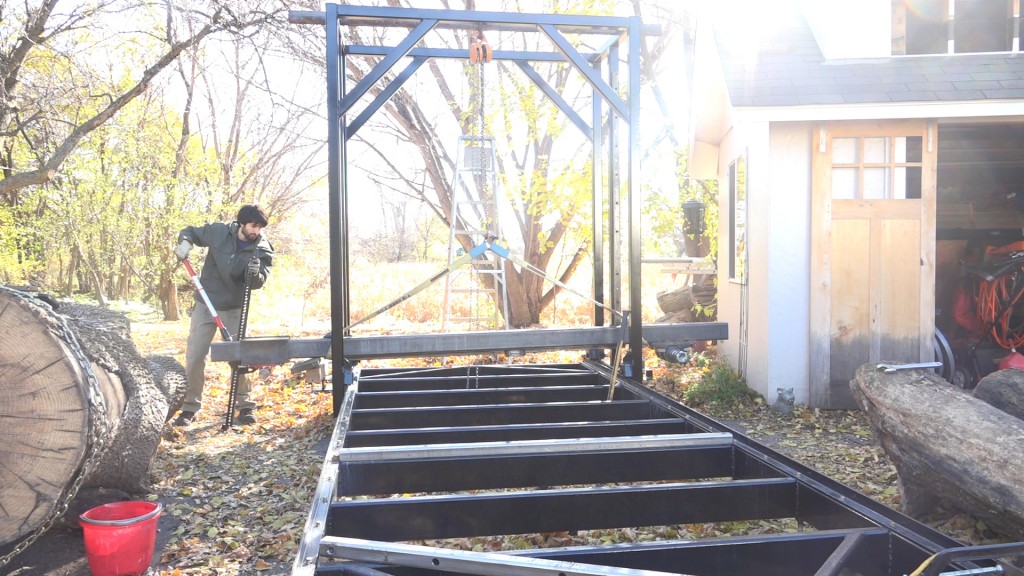 I used a jack to gradually lift both ends of the beam, guiding the linear carriages onto the rails. 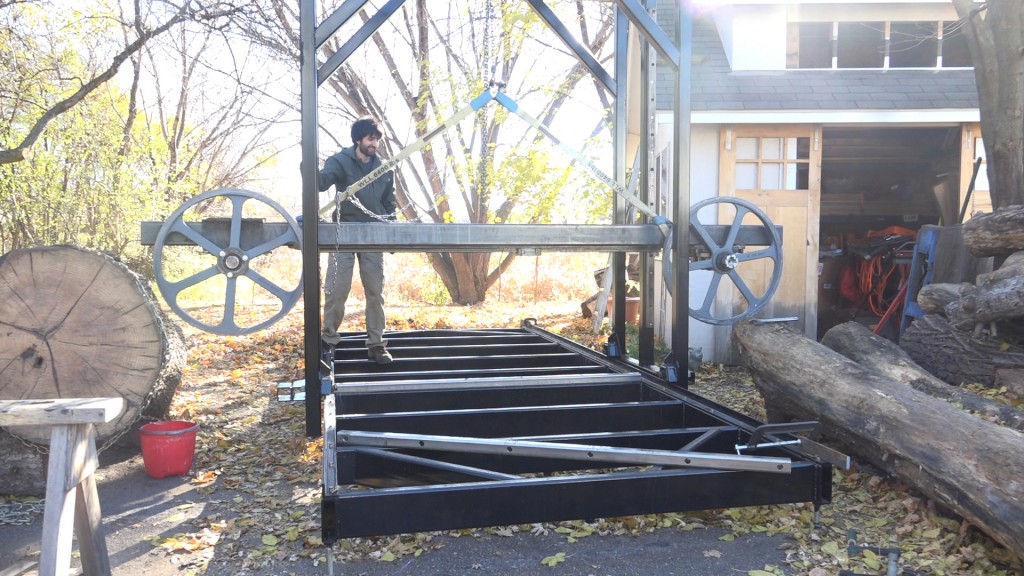 Once the carriages were fully on the rails, I could use the hoist again to raise and lower the saw head.

Next time we’ll take a look at the motor and build a mount for it on the beam.

The Making of the Drive Shaft 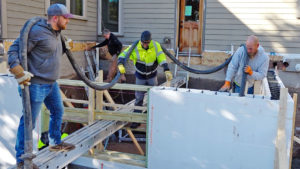 Pouring and Waterproofing the Basement Walls

Welcome back to our home addition/remodel project! Today is Monday, October 25th, and it is the start of week three of this project.  Last time, 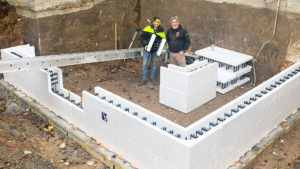 Welcome to my backyard, and welcome back to the home addition/remodel project! Last time, we worked on getting the footings in, and the concrete in 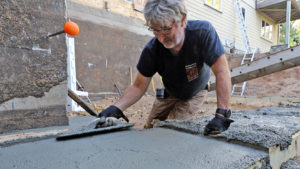 Welcome to my backyard and to our home addition project! Last time we did a rough excavation, and today we’re going to get started on