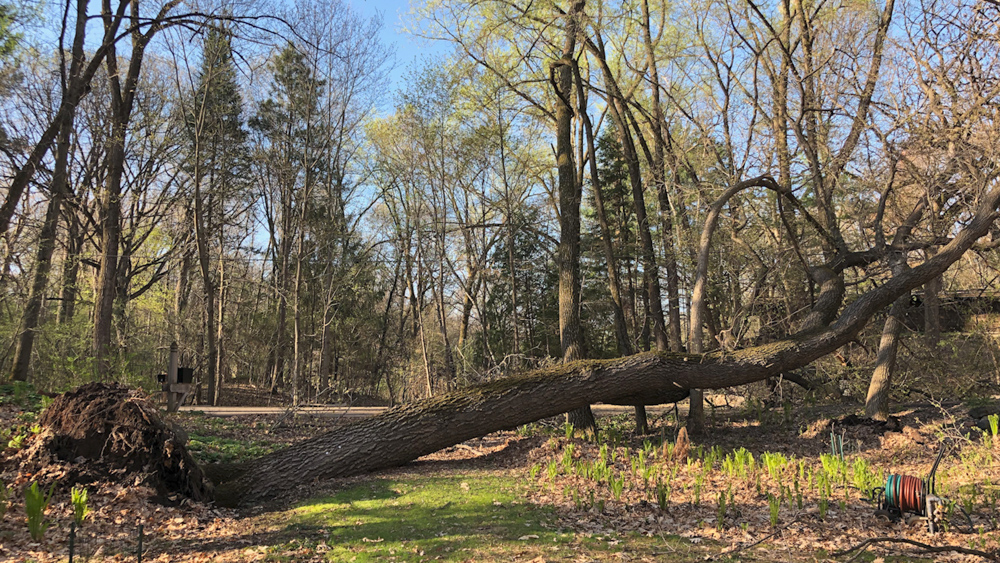 A viewer reached out about a red oak tree that fell over in their front yard.  He asked if I would be interested in salvaging it since he’d hate for it to be just hauled to the dump.  The tree fell across the front yard and across the driveway.  he had a tree service clean up the top of the tree and remove the other trees which were damaged due to the red oak falling on them.   They left the red oak tree intact where it was only in the lawn so I could cut it to my desired lengths. 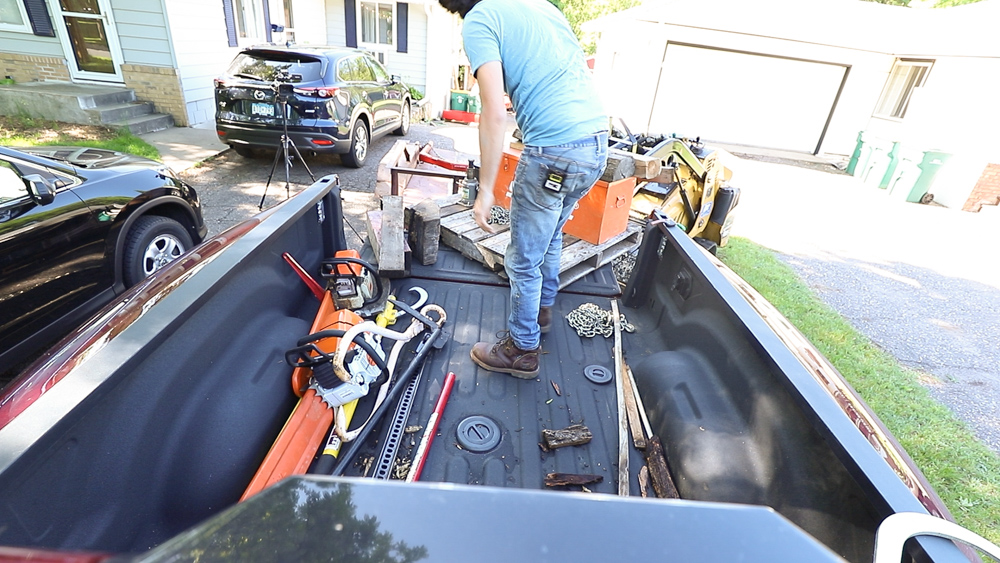 I like to bring extra tools and supplies with me.  When you’re away from home, you never know what may be needed.  Chainsaws and their needed accessories, pry bars, jacks, blocking, chains, a peavey and cant hook. 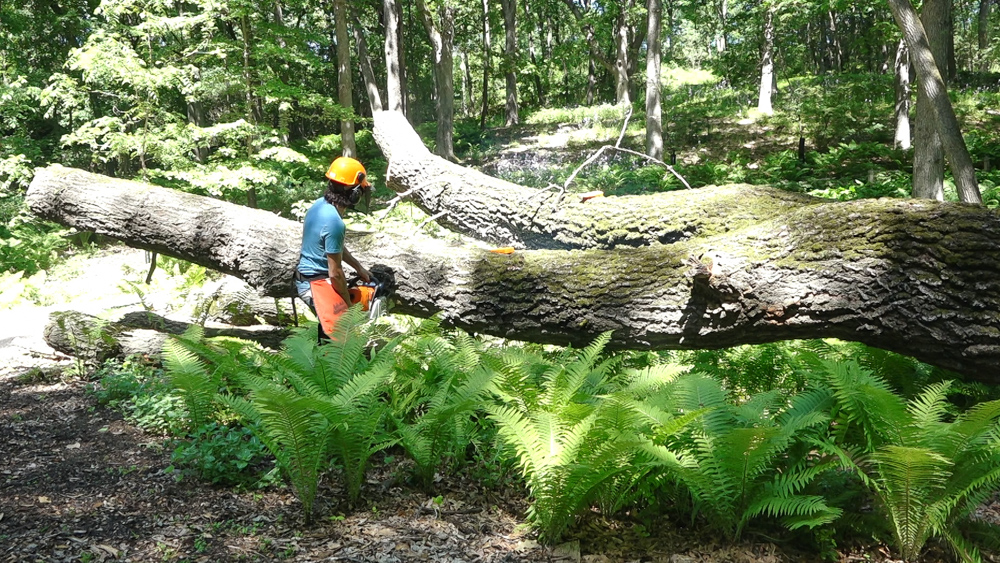 It was a little hard to get a sense of scale from the photos so when I arrived, I realized that there was a lot more tree here than I was anticipating.  This is going to take a few trips to get hauled home.  I started breaking down the tree into logs so they’d be ready to go for the various pick ups. 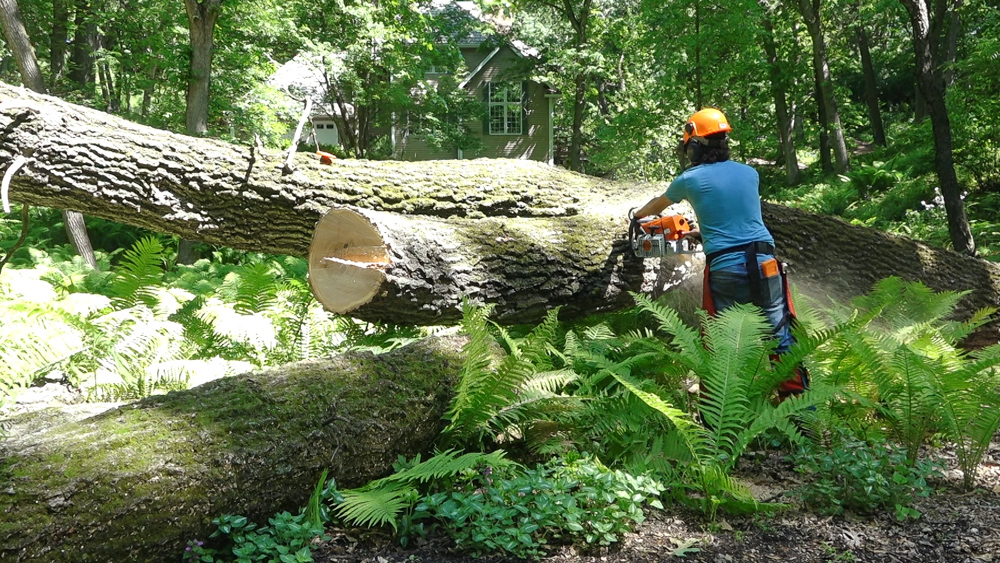 I released the top and bottom section of the main canopy limbs above one side of the crotch.  The second log would have been in the way so I moved it that way I’d had an escape path as I was releasing the other section.  This tree was also laying across a hill so the far side would be downhill – not somewhere I’d like to be when a log drops. 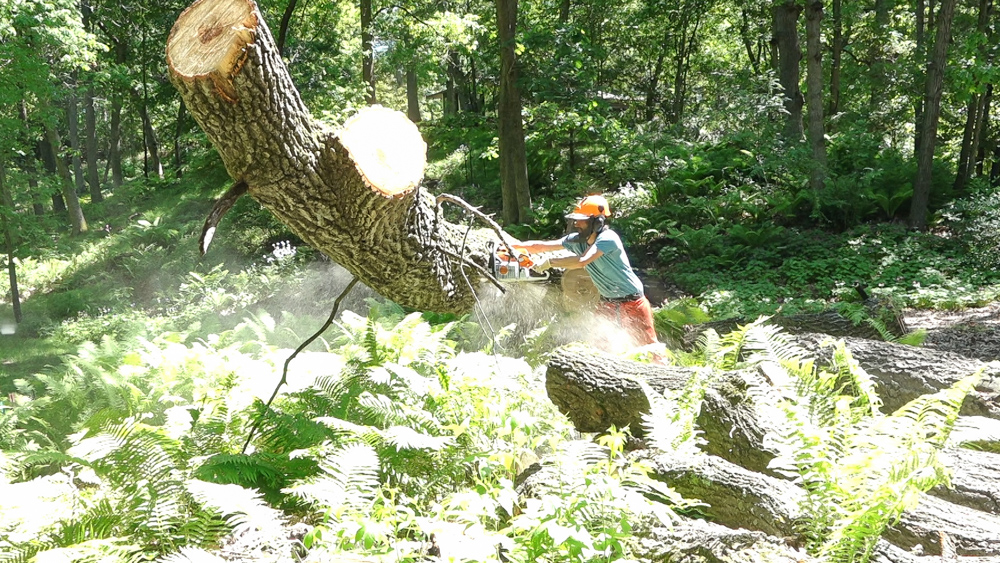 With a path cleared, I can start sawing on the other side to get the rest of the canopy limbs onto the ground. 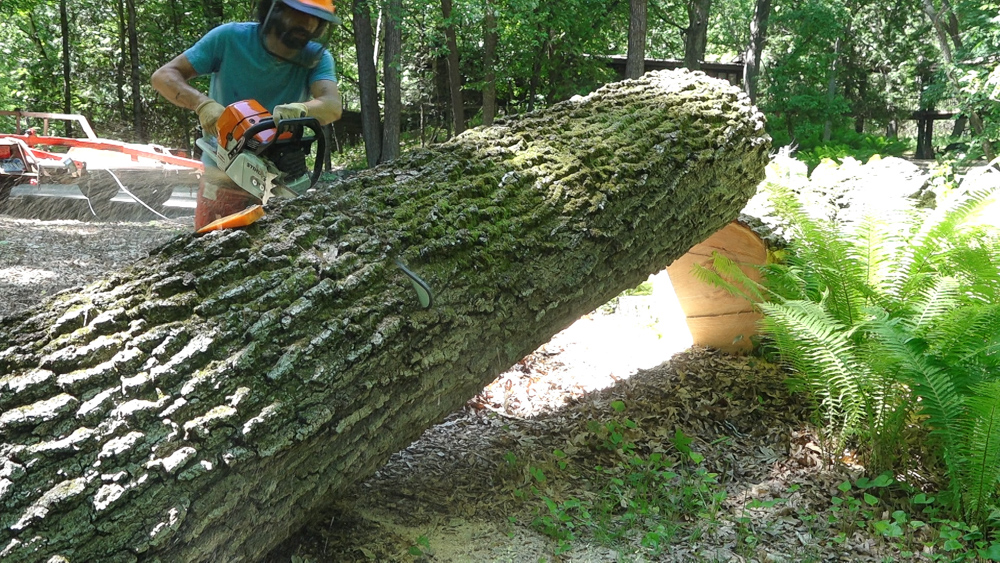 Next I could start working on the trunk.  I made a cut below the crotch leaving that log around 6′ long which would leave 2 8′ sections of the trunk. 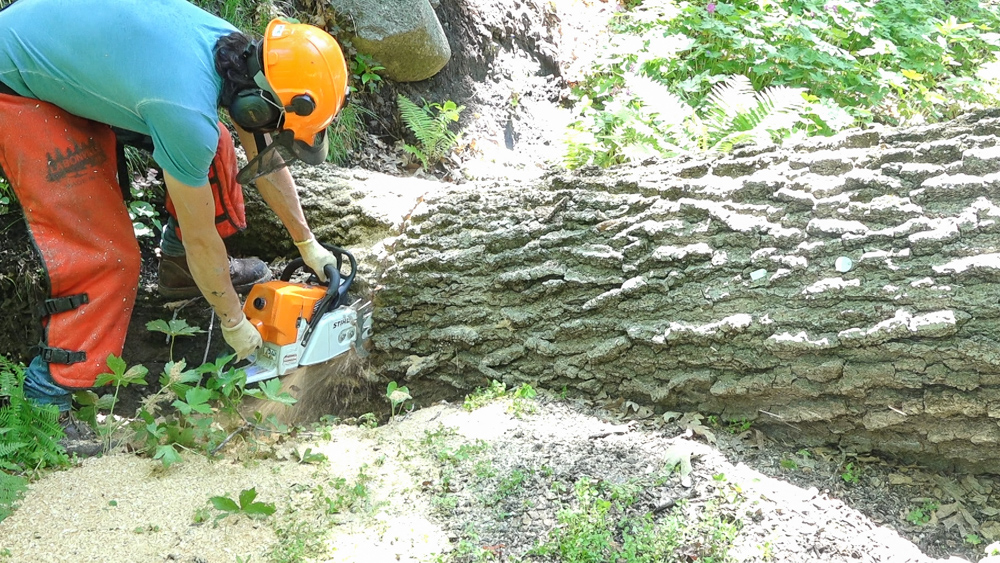 Lastly is the cut that will separate the main trunk from the root ball.  Because of how the tree feel, the roots got pushed back into the hillside.  This left a nice opening under the area I was cutting.  No need to fight sawing into dirt.  It was however challenging to cut all the way through the base with the 28″ bar on my saw.  I had to cut from both sides and it was difficult to see if I had made it all the way through towards the bottom. 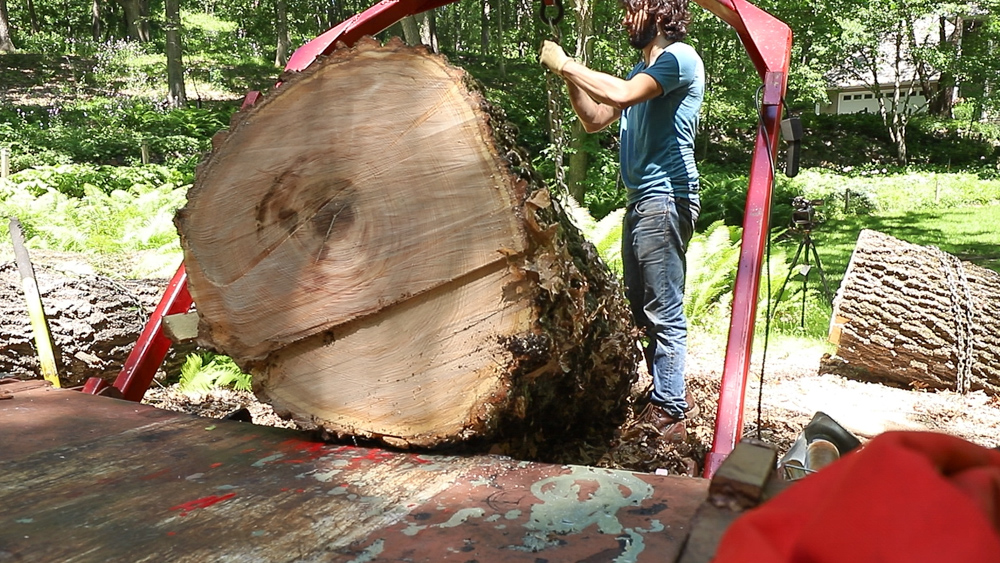 With the cuts made, I’ll start loading beginning with the middle section of the trunk. 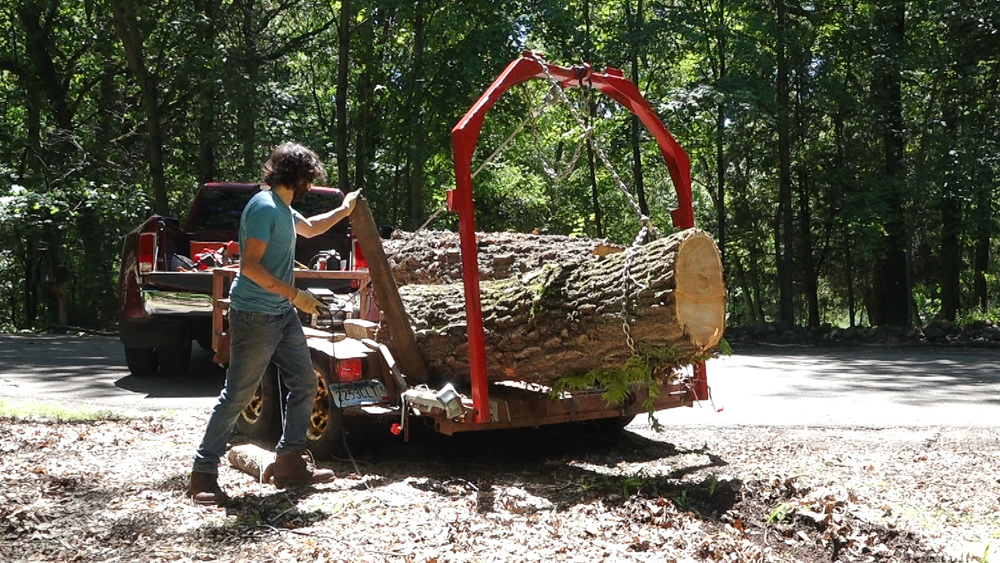 I gave the base of the trunk a tug with the arch but it didn’t budge.  It is likely still connected so I’ll come back with a longer bar and try to finish up the cut.  I can grab a smaller log on this run. 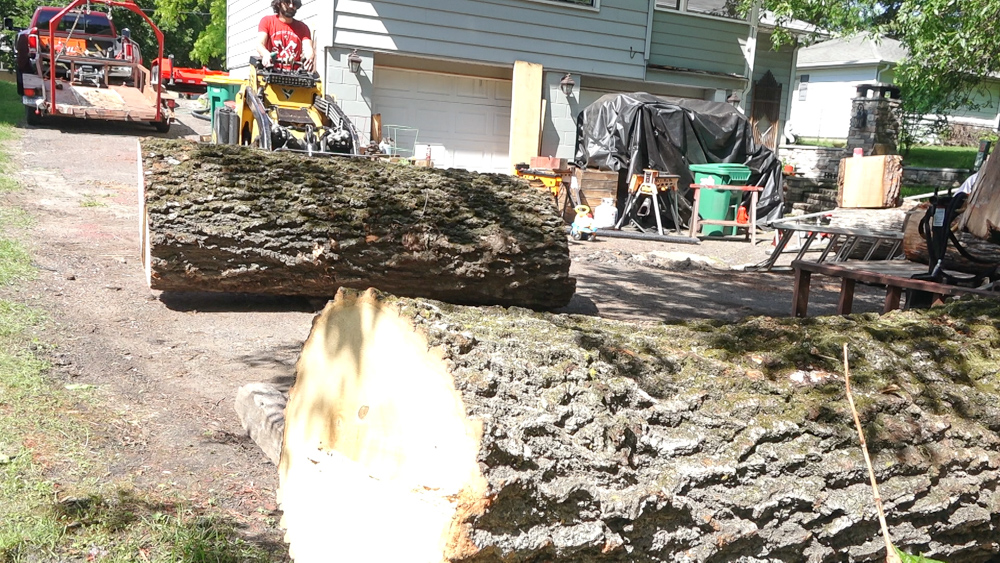 Back home, I’ll unload the trailer and stack the logs in a shady spot in my drive way on some blocking.  I’ll seal up the end grain and when I go back out, I’ll bring the pail of anchorseal and seal the logs that are still on site. 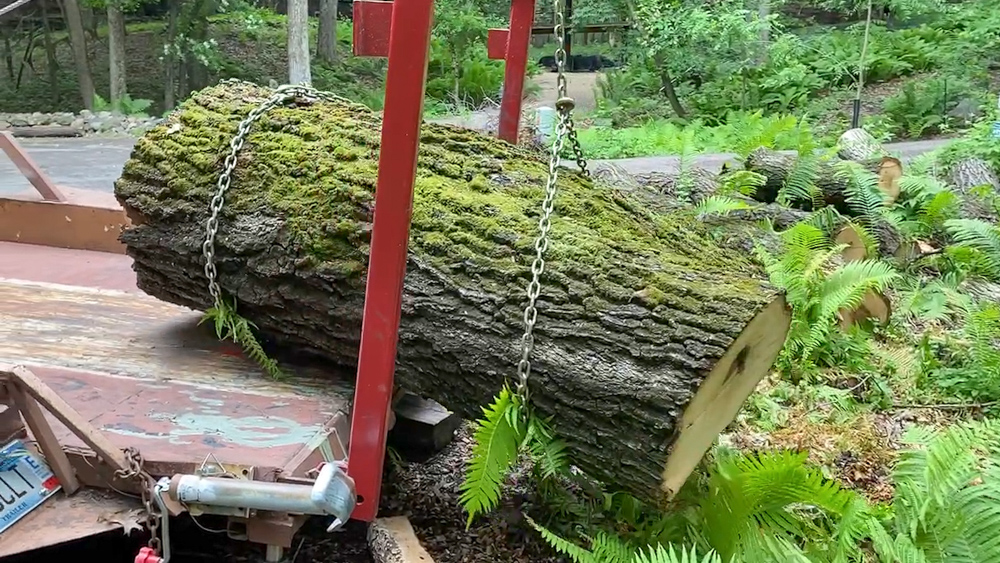 The next pick up was pretty quick.  I was able to get the crotch onto the trailer but with that log on there, there wasn’t much room for anything else. 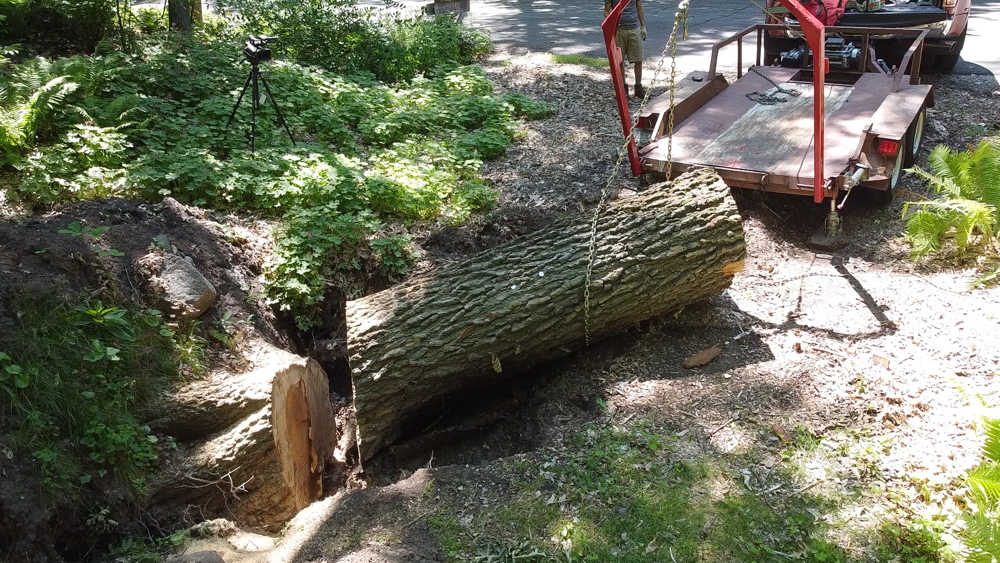 For the 3rd pick up, I finished the cut on the base and pulled the main section out of the hole in the ground and onto the trailer. 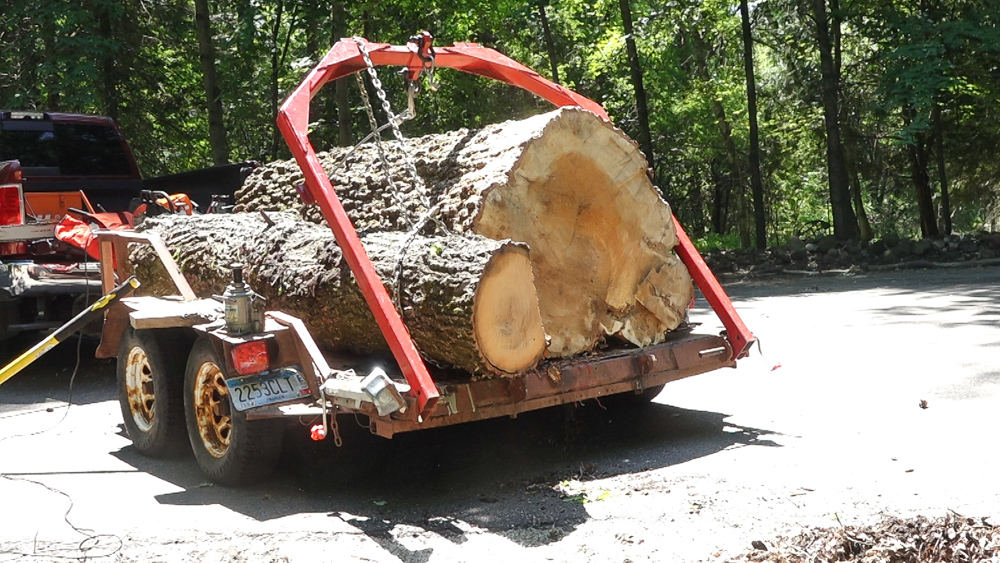 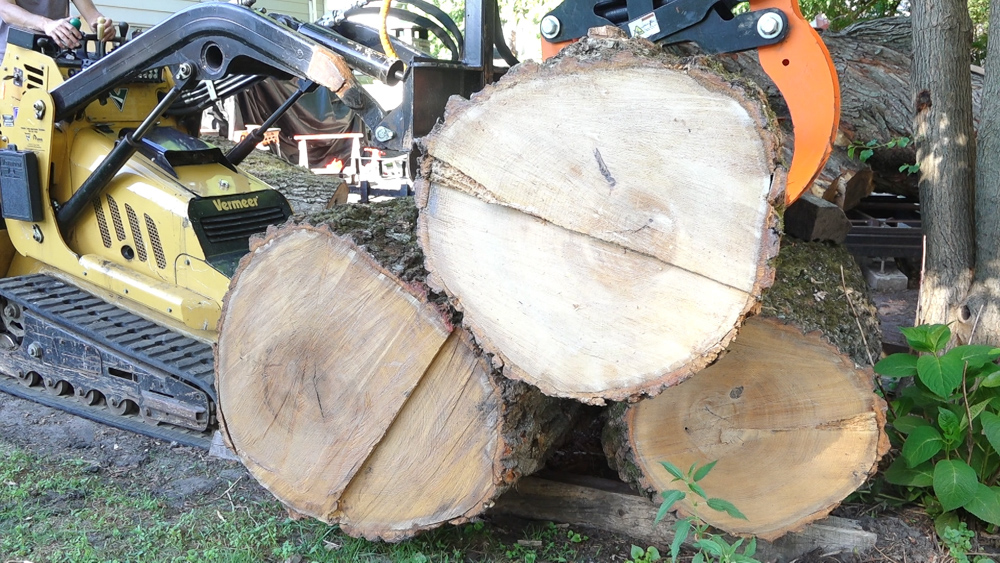 Back home the stack of logs grows.  The grapple attachment really helps with stacking logs and is a lot of fun to use.  Giant claw game anyone? 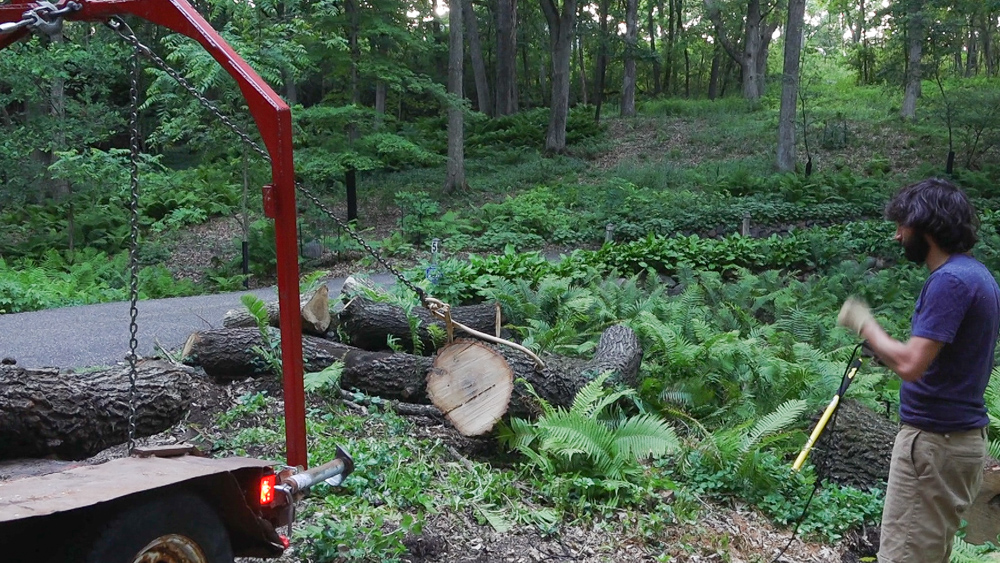 Since these logs were down a hill, I’ll use the log tongs to skid them closer to the trailer and to lift them so I can easily chain them. 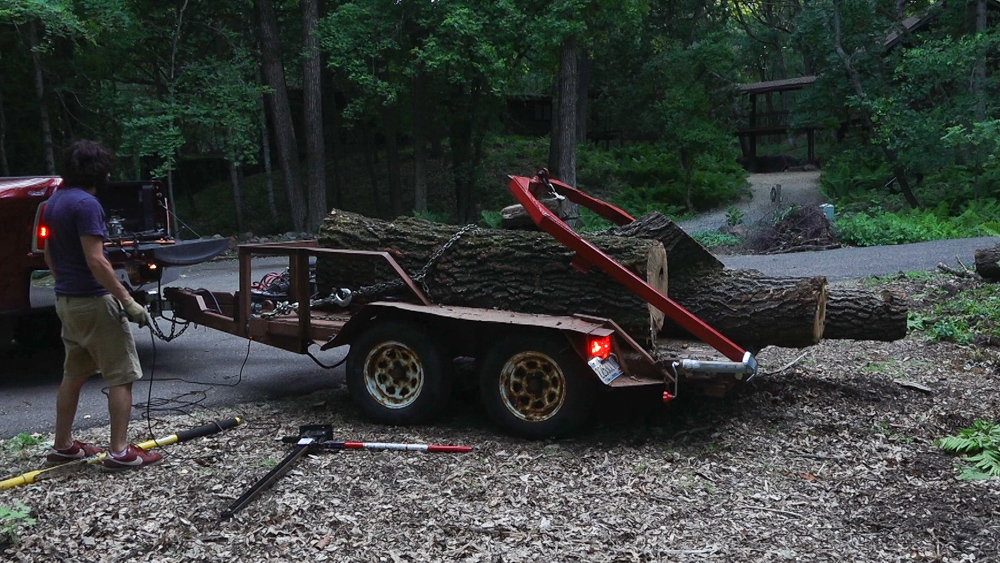 It was a bit tight but I was able to get the last 3 logs onto the trailer. 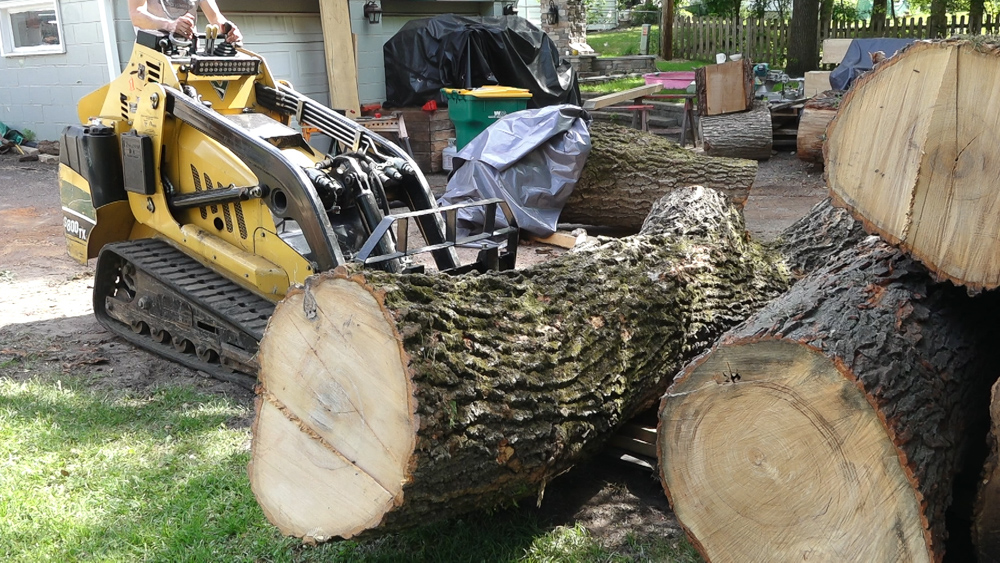 A little more stacking of the uniform logs and then I’ll move the crotch over to the front of the pile. 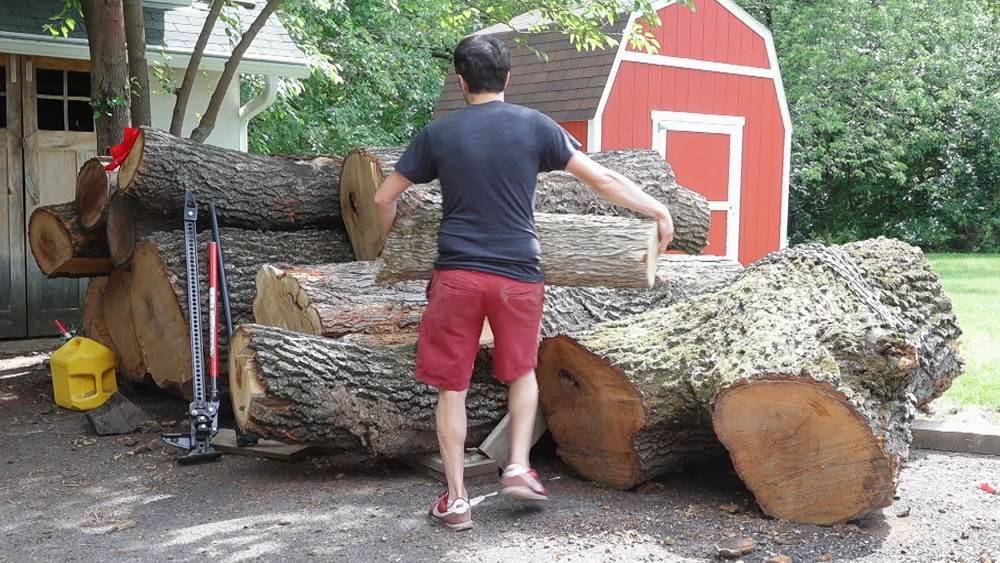 When this tree fell over, it took out several smaller trees.  I grabbed this section of elm because it was small enough that I could pick it up and throw it in the back of my truck.