Taking a break from the renovation to put up a building

Hey, everyone. Just wanted to do a little bit of an update thing to let you know what’s going on here as things move forward. If you look at the title, you can see that we’re taking a little break from the home renovation, and we’re starting a new giant project.

In terms of the status of the renovation: we finished up the mudding and taping and priming in July, and I have been traveling and catching up a bit in August. So right now the videos online are caught up in real time with the current status of the renovation. I expect that we’ll have about six weeks of no renovation videos, but we’ll be doing other things. 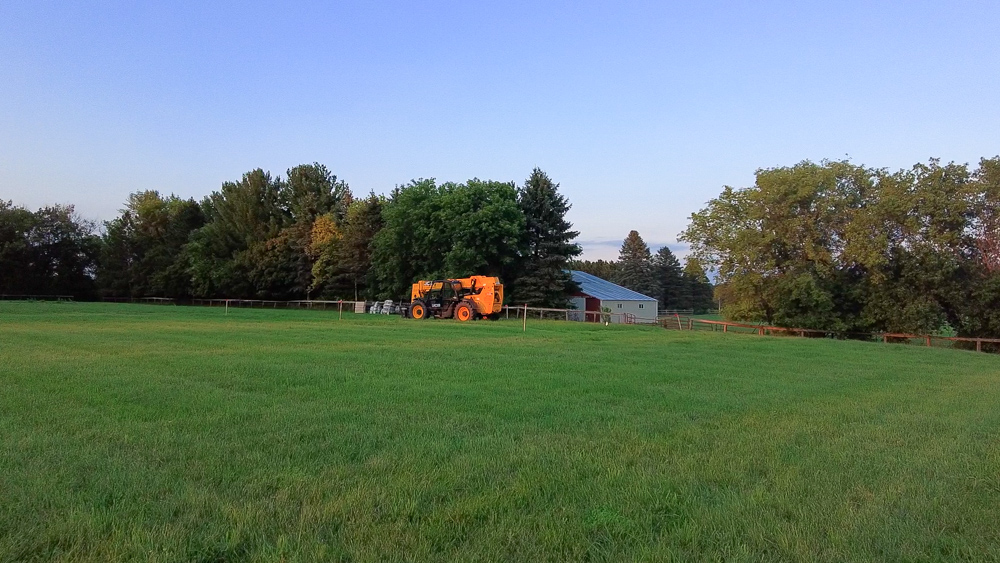 So let me tell you a little bit about the new building we’re planning to put up. It’s going to go up here in this top field area. 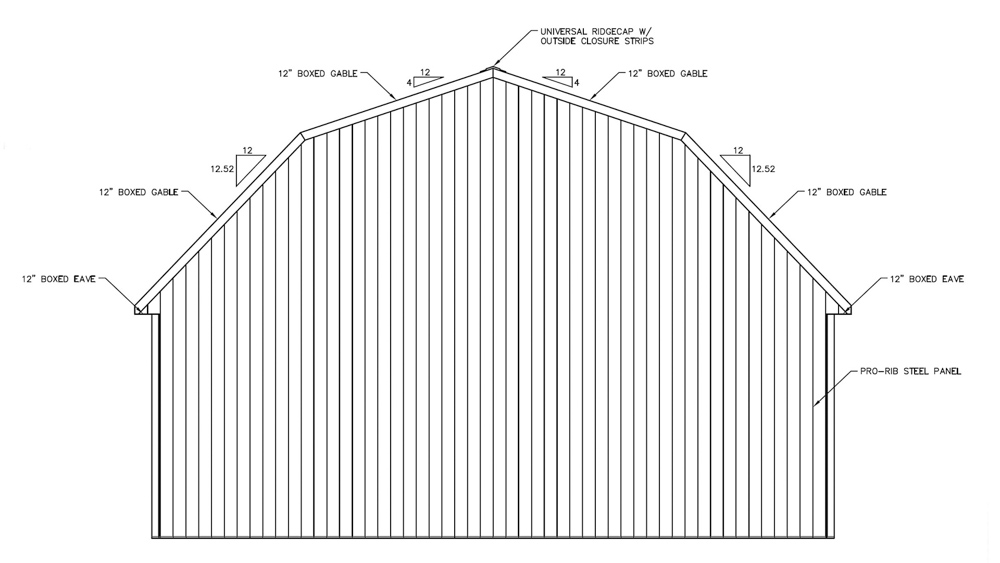 It is going to be 40×72. It will have 14 foot side walls, and we’ll be doing a gambrel style, 14 feet tall roof truss so it matches the barn that’s already on the property. So this whole structure would be approximately 28 feet tall. We are planning on having a lean-to porch on one side of the building, but we won’t be doing that right now because it is getting kind of late in the year. 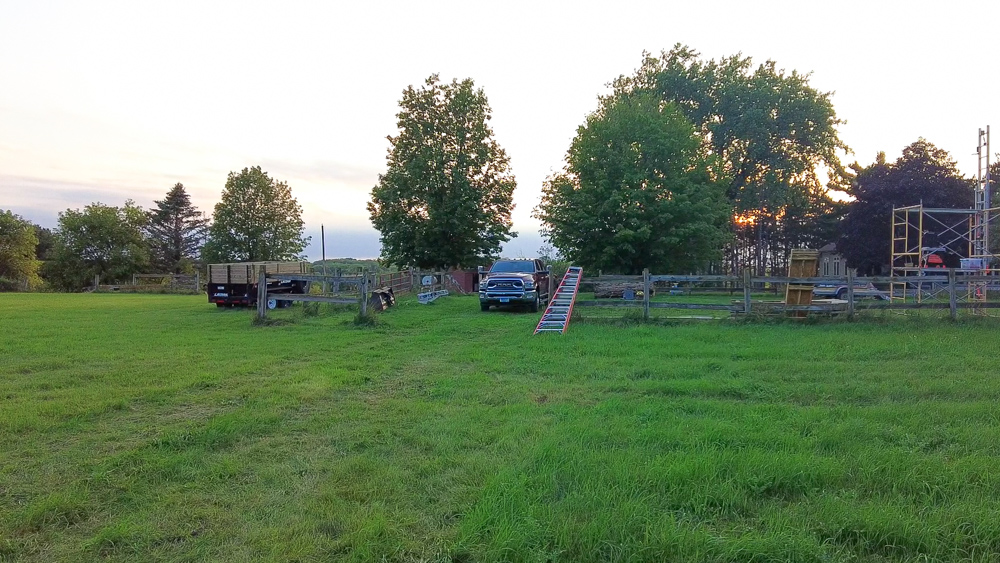 We’ll be doing one overhead bay door on one end of the building, and then adding a driveway that comes through where my truck is which will connect into the existing driveway.

We’d like to get the building up as quickly as possible. We’ll be subbing out a lot of the work, but Donavan, myself, and some helpers will be doing all of the framing, erecting the building, and putting the tin on. Our concrete contractor is coming tomorrow to start on the roadway and getting the building site prepped for installing all the footings for the posts.

So a general time frame on this: the foundation should be finished by the end of this week, the materials are coming this week, and then we are planning to start framing on the 12th of September, which is also when the trusses are arriving. 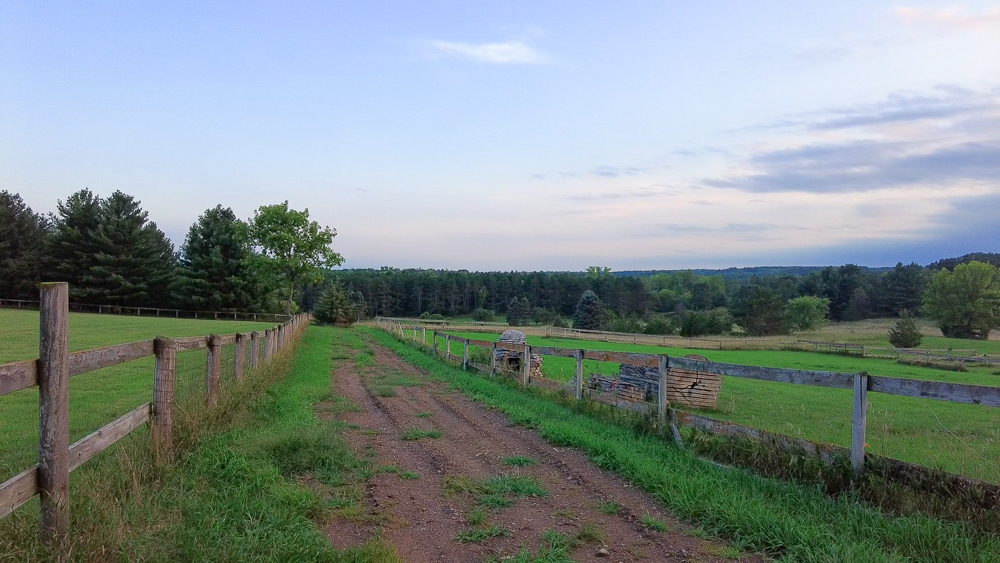 So I thought we’d go on my evening walk together, and I can explain why we are doing this now. Because the timing is, you know… fantastic, given that we are in the middle of renovating the house. If you recall, two years ago, I launched my chair and work bench kits. At that time, I was in my old house with a two car garage and was just working in my driveway. I had put off finding a workspace because I knew we were planning to move someday. At the point that I launched the chair kit business, we had been actively looking for a house for 35 months, and I knew that if I wanted the business to take off, I couldn’t do that in my driveway.

So I found a warehouse that I rented a space out of, and that worked out really nicely. But their business kept growing and growing and I figured they would be looking to get their space back, and they let me know in February that they were not going to be renewing my lease. At that point we had moved, and it was a 40 minute drive to the warehouse from our new house. I looked for another place I could rent or purchase, but there was nothing near my house, so I decided to go the build-my-own-space route.

Now, we already have a barn on this property, and when we purchased this place, we had planned to convert that barn into a guest house. We have out of town guests pretty often. Up until recently, both my parents and Lindsay’s parents, lived out of state, so they would visit for multiple days at a time. The house doesn’t have a guest room, and the floor plan doesn’t really lend itself to having one. So we decided we’d use the barn for guest space. But then, you lose the functionality of the barn as storage space. We figured that someday, we’d need some kind of storage building to take the place of the barn. So that’s why we decided to just build the new barn. 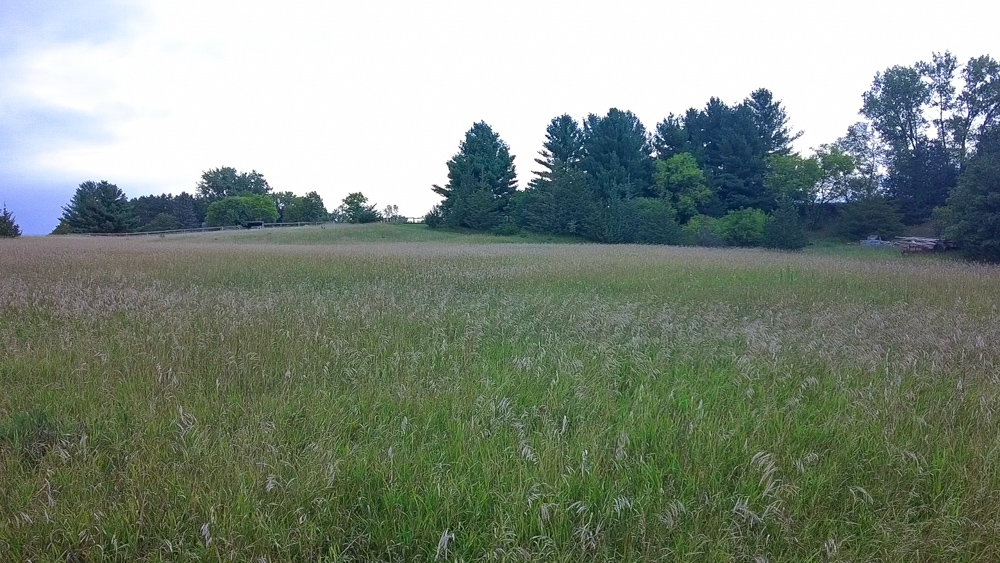 As long as we are talking about future plans, my walk has now taken me to where I’m going to put my shop someday. I want to build it into this hill right there, and I’m planning on putting the sawmill into the little alcove over to the right.

So that’s another nice thing about having a new building on the property: it gives me some extra space for staging and materials, as I look to build these two buildings back here. So the new building’s purpose is both to be a place to allow those businesses to operate and grow, but also to give me some flex space to do whatever I need to.

So that is the backstory on why we are building this new structure. One question that I’m sure I’m going to get is if I am planning to move my shop into that building. The answer is no. One of the things that I learned about having the warehouse space is the beauty of having separate spaces for separate things. So the shop, which is in my garage, is my creative space. It’s definitely a lot more efficient than trying to cram all the stuff in the same place and having things getting in the way of each other.

I also anticipate people may ask why I didn’t turn the barn already on the property into the shop. I think that barn looks a lot bigger than it really is, and it’s not nearly big enough for what I need.

Lastly, I’m sure people will ask why I’m not making the new building bigger. We don’t want a giant building on our property. In reality, what I would need would be like a 50×100, which I have no desire of having here on my property. So as these businesses grow, it is my intention to move them off site as needed.

So that’s the update and introduction to the new building. I will start having videos on that pretty soon. The first one will cover the excavation, site prep, and foundation work that the concrete folks are doing. Let me know if you have any questions about the building. I’m sure there’ll be a lot of them. And happy woodworking!