Ripping out our Patio and Deck – Site Prep

Welcome to my backyard! Today, I’m getting started on the first part of the home addition project. I’m doing the site prep and demolition work for the sunroom addition, which will be on the back of the house. We have two additions in this first phase of the remodel: this large sunroom addition in the back of the house, and a small bump-out on the front for the front part of the kitchen.

We are putting a full basement foundation in the back for the sunroom addition, and we want to get that dug and in the ground before it starts getting cold. It’s October 10th and we live in Minnesota, so we are kind of pushing it. As soon as that is in, we can work in the cold, but we want to avoid concrete work in the cold. 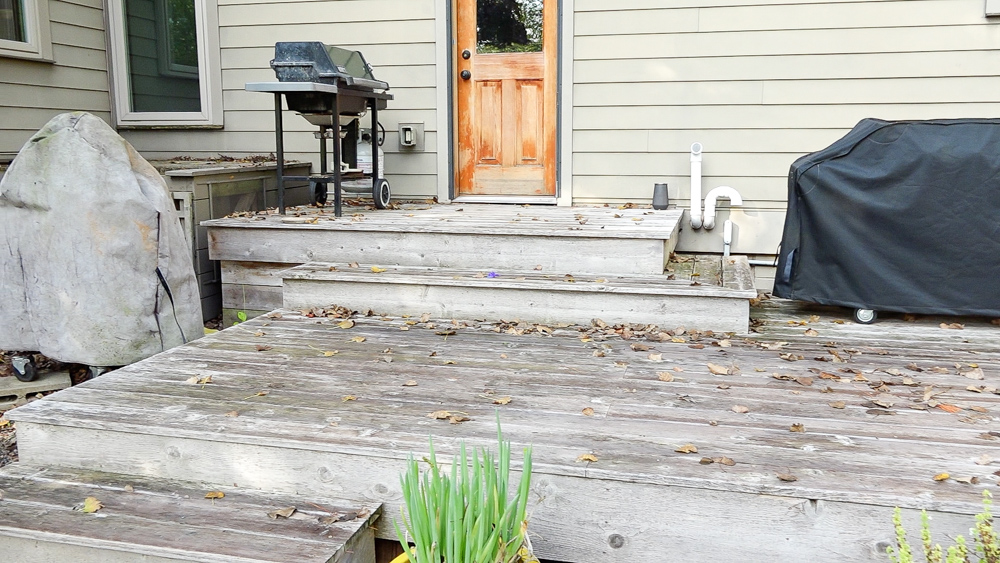 Let me show you what we will be working with today. This is the deck we currently have on the house. I have roughly staked out the corners of the addition and everything inside of that area has to go. The entire deck is coming out, I have to remove the panels which shield the air conditioner units, and I have to move the generator somewhere else. 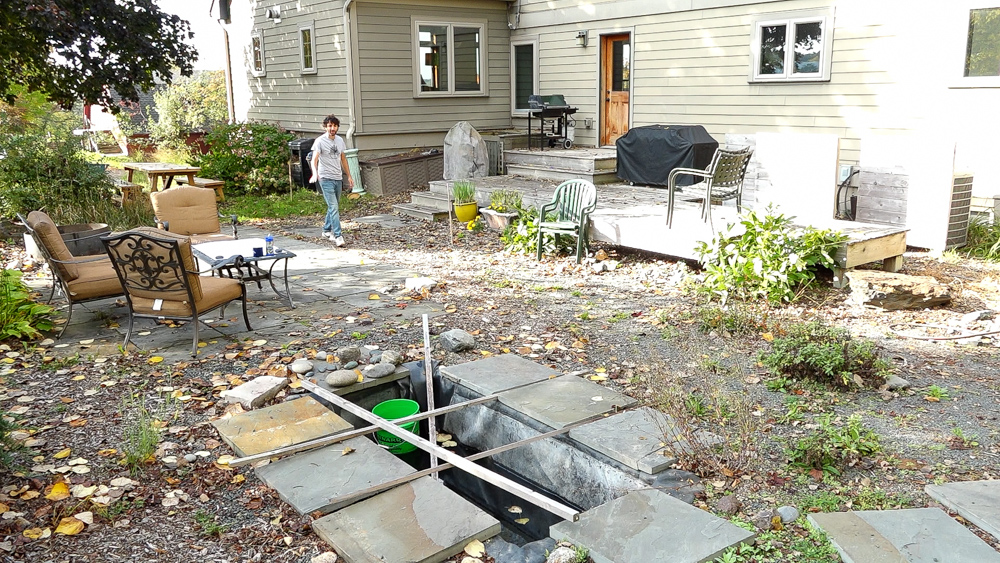 We have this stone patio in front of the deck, as well as this frog pond, and both of those will get removed as well. Later on, we will probably change our patio set up and move the fire ring where the frog pond is now, and I’ll be saving the pavers to use for the future patio.

I get to work on destroying things now! 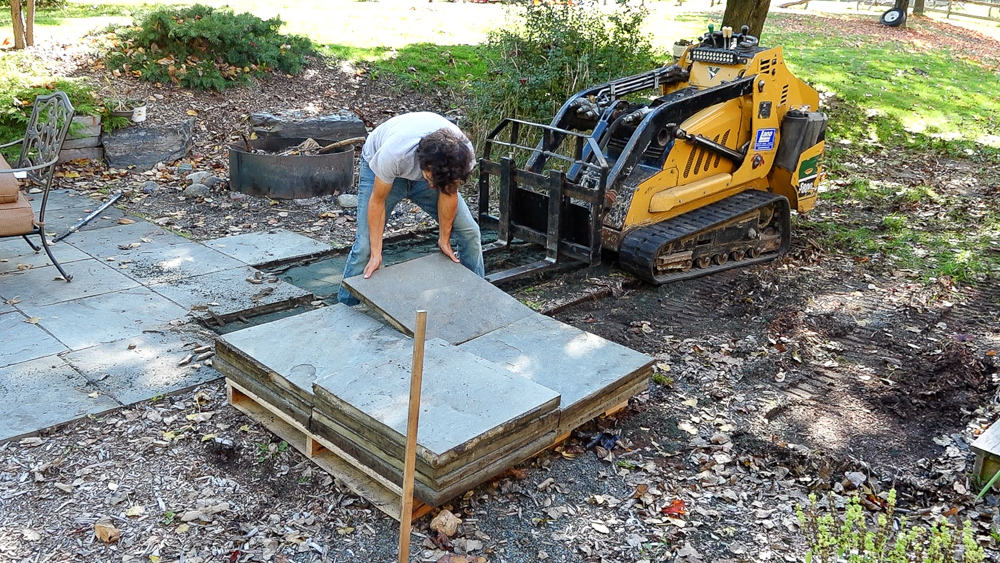 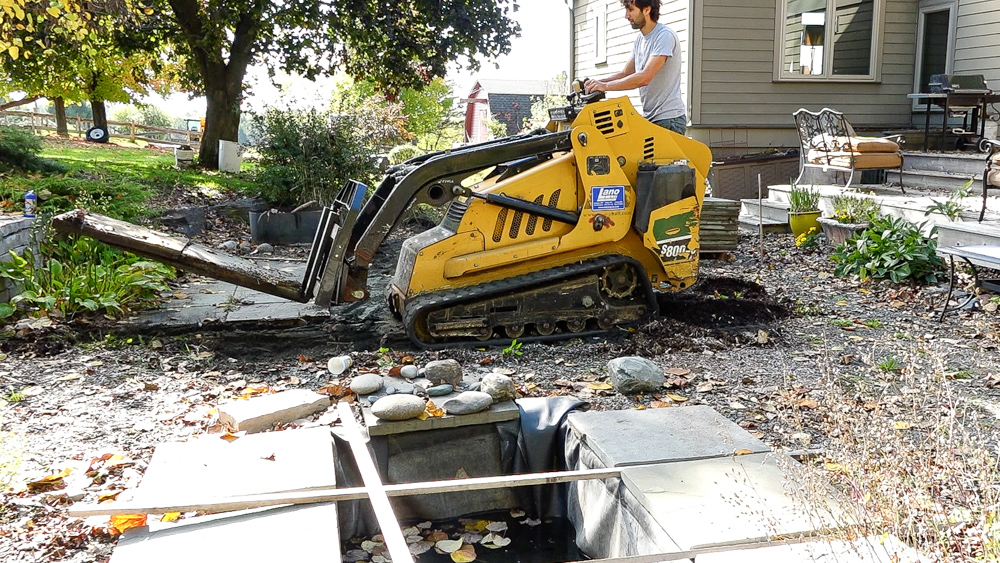 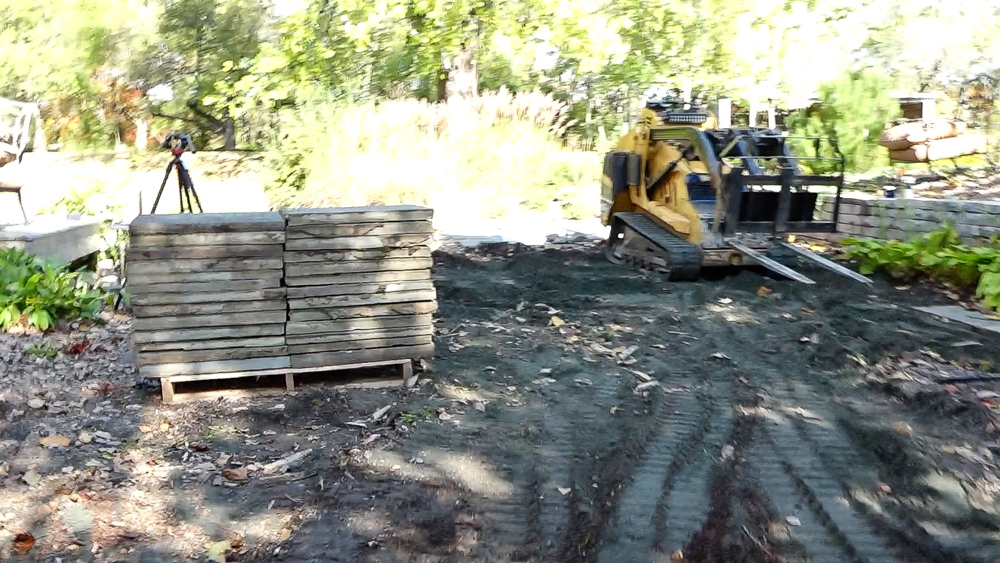 That’s a quite a lot of a bluestone pavers! I’ve got two more left and then I’m done with the patio stones. It looks weird back here without them. It took about an hour to pull all of these pavers up and get them stacked on the pallet.

Next I’m going to start pulling out the deck. First I have to tidy it up and remove all of the cooking devices and furniture. Then it’s going to be like a bajillion screws coming out. 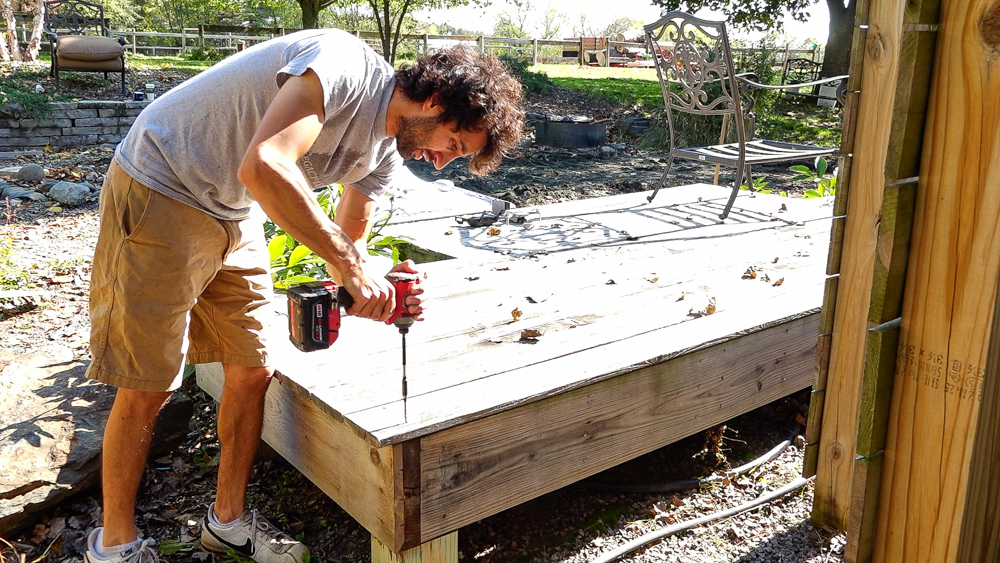 We’ll see how many deck screws we pull out of here. 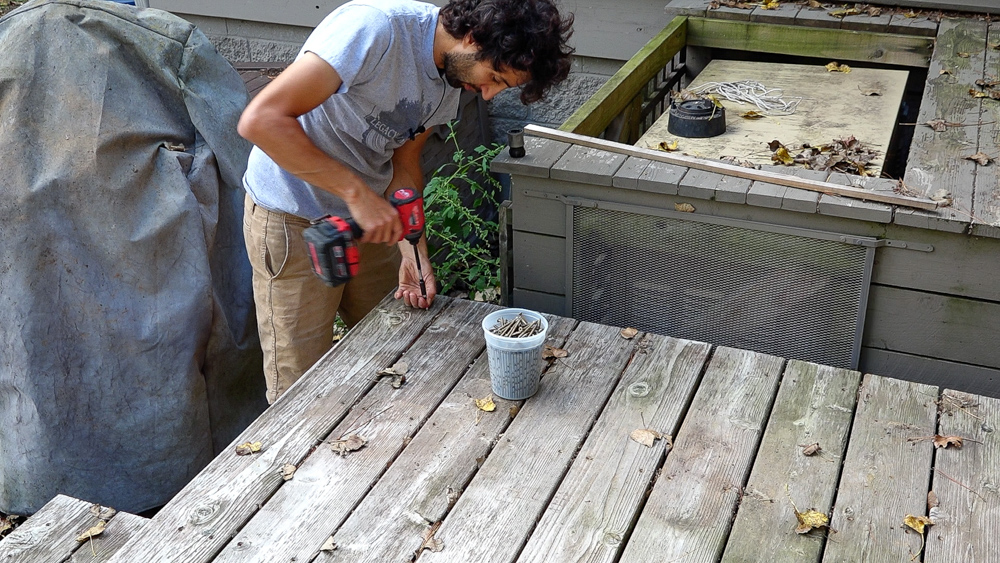 Here we go: the last two screws. I have no idea how many that was, but I have three of these buckets. That’s a lot, and it took an hour and a half to get them all out. 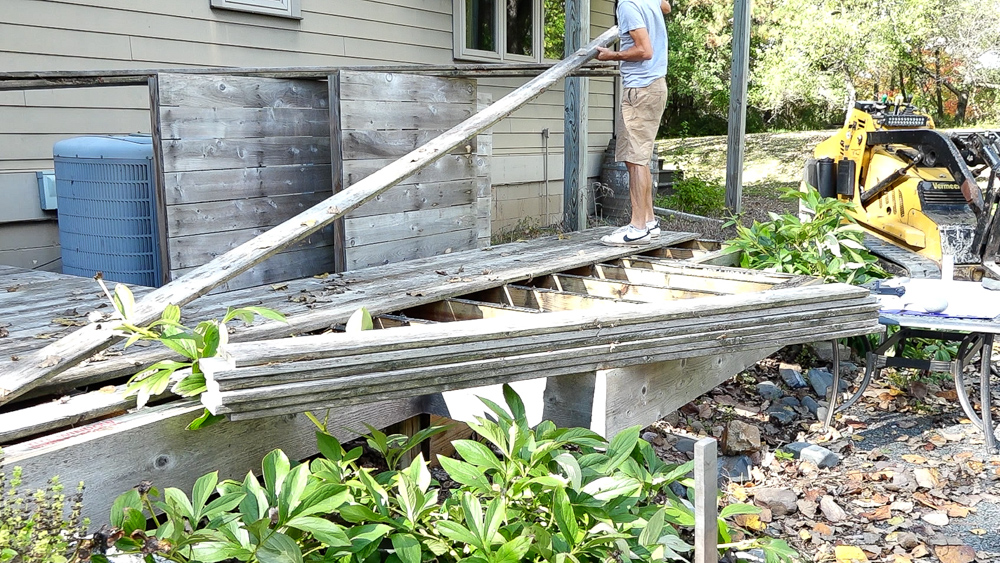 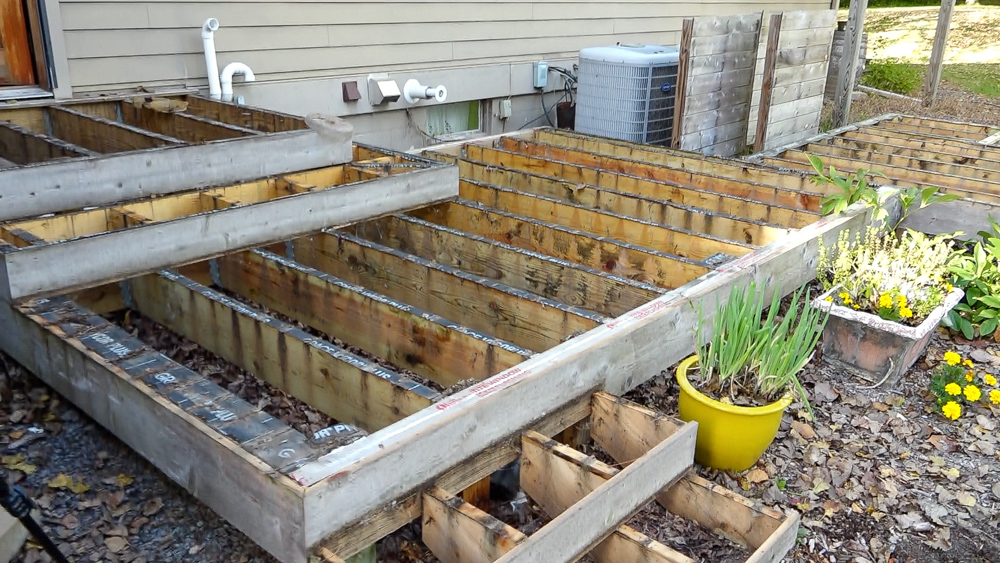 Deck boards are all gone. I think I’ve underestimated how much work I have ahead of me, because this looks like it’s going to take even longer to take apart. I’m going to start with all of the stuff connected to the house so that if I get sick of it, I can come in with the telehandler and lift the lower assembly out in one piece. 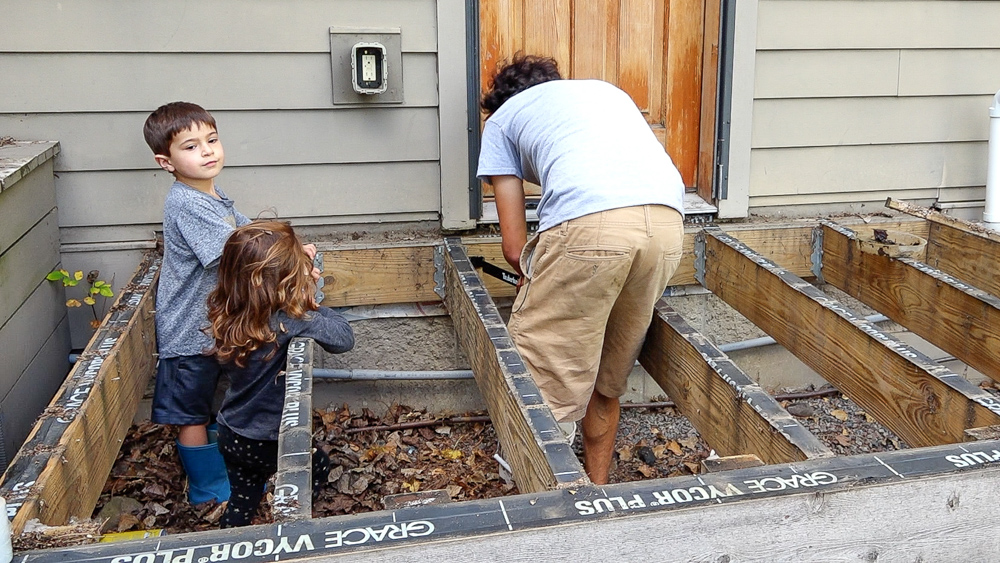 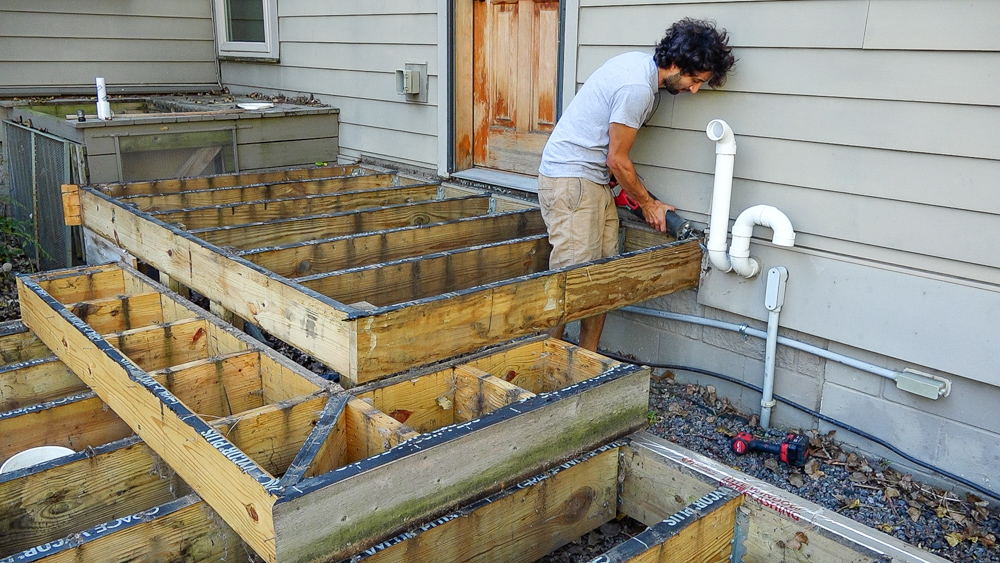 Everything is disconnected from the house now, except for these outside joists. I can’t get to their nails or screws because the house’s siding is in the way. I don’t know why, but I’ve been approaching this as if I need to save everything. I think, from now on, I’m going to be more efficient with this and just get it out of here. 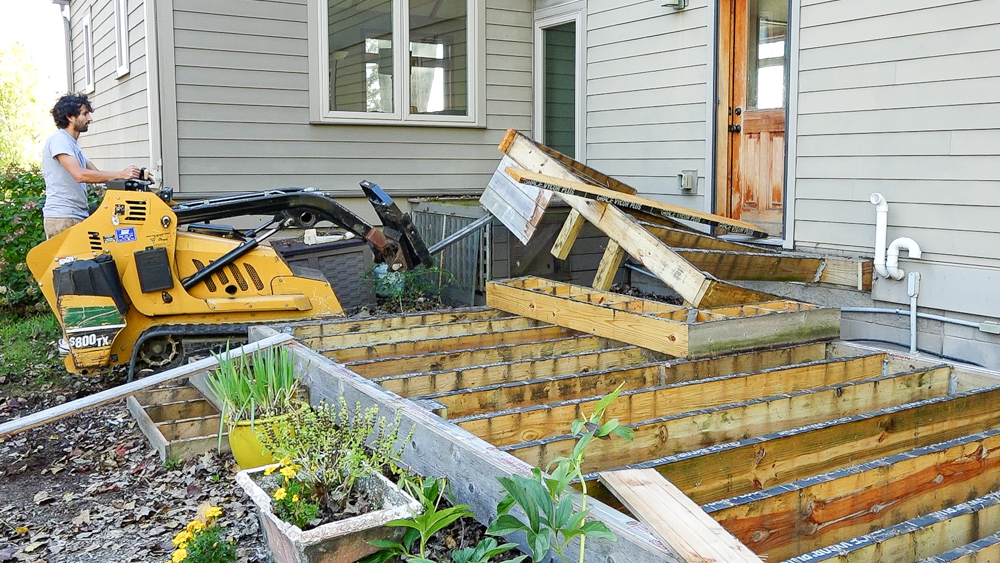 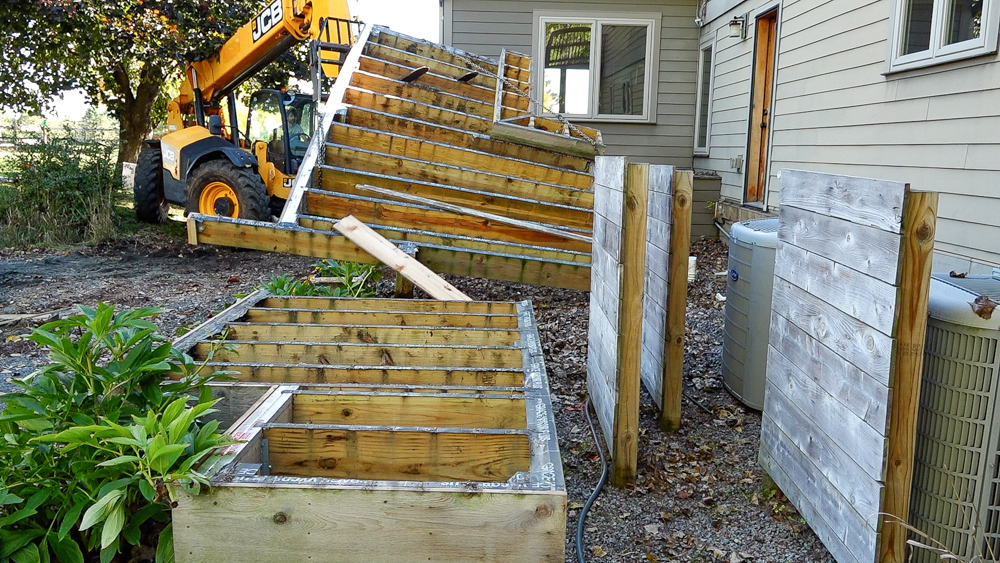 I’m going to get a little more aggressive with this removal. 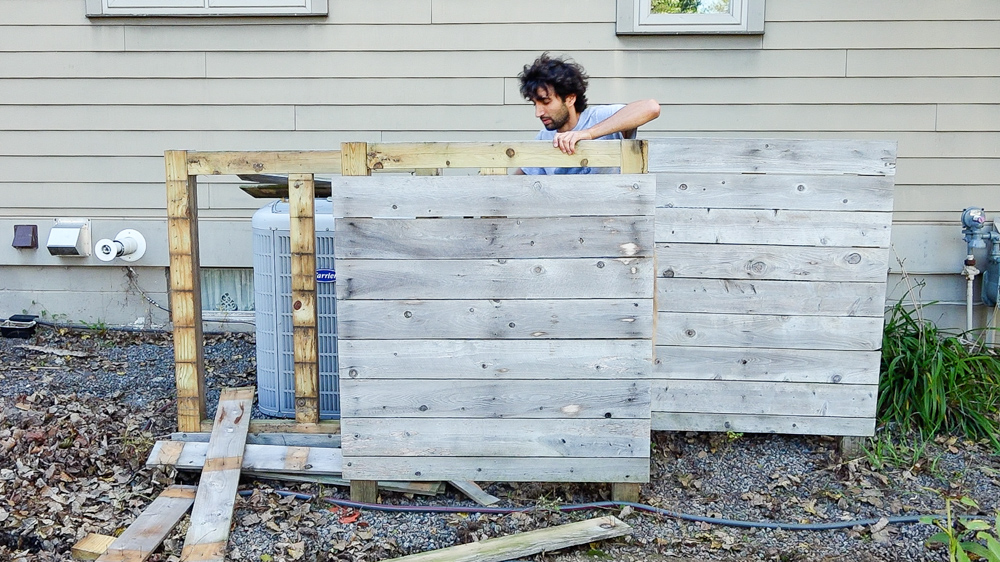 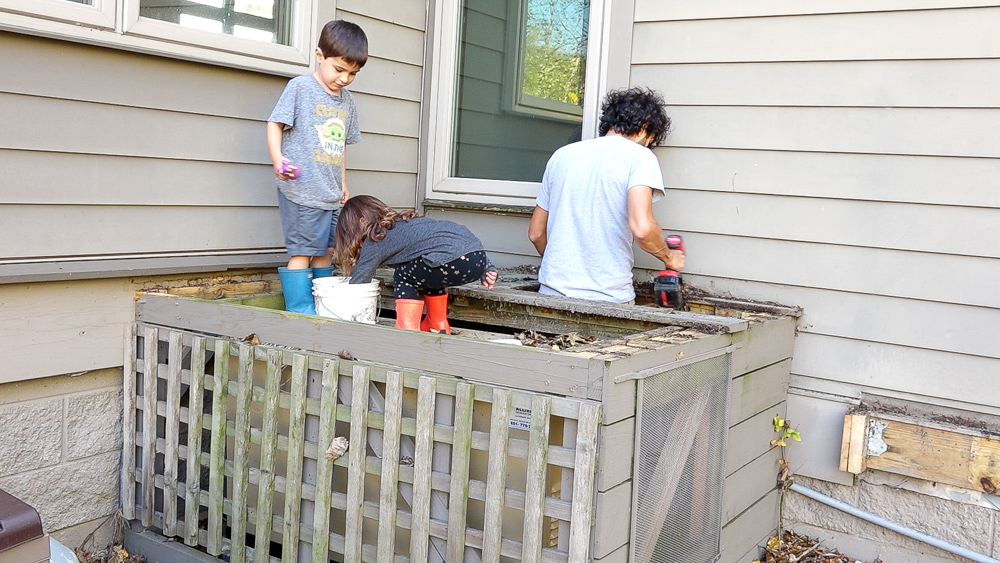 Next, I have to take apart the shields around the air conditioner and generator. 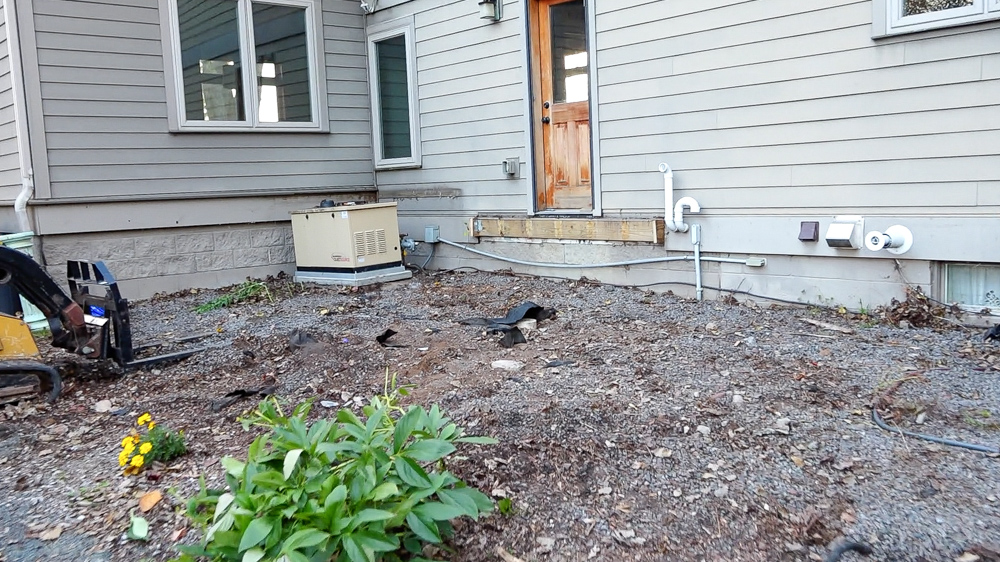 I think that is pretty good progress for today. Tomorrow I’ll get out here and move the generator, but that’s really all I need to do before excavating starts. But things look a little different now! 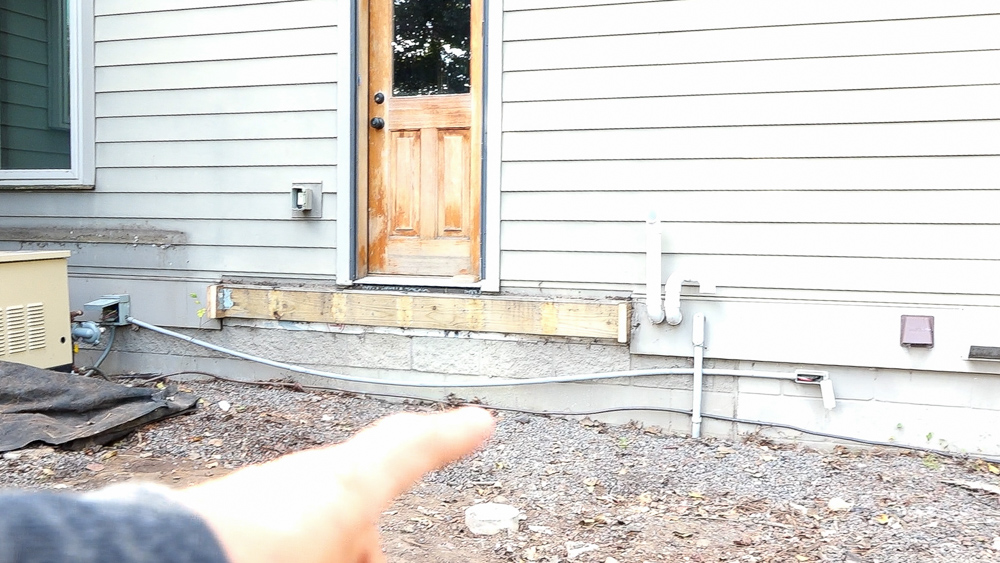 Good morning, today I’m looking at getting this generator out of here, and things have devolved quickly as I started looking at this. My original plan was to take this conduit off the wall, flip the 90 degree pull box around, and then run the conduit the other way. The first problem is that the conduit isn’t long enough to go all the way where I need it to, meaning that I would have to extend the electrical. That isn’t a huge deal, but it’s more than what I wanted to deal with right now. Then I had the realization that the exit point on the house has to move anyway because our new structure is going to extend past this point. So this can’t even be here. I’m going to kick the can down the road on this side project, and just disconnect the generator and put it to the side of the house for now. Sometime when I have more motivation, I’ll reroute and extend the electrical line through the basement and have it pop out somewhere else. 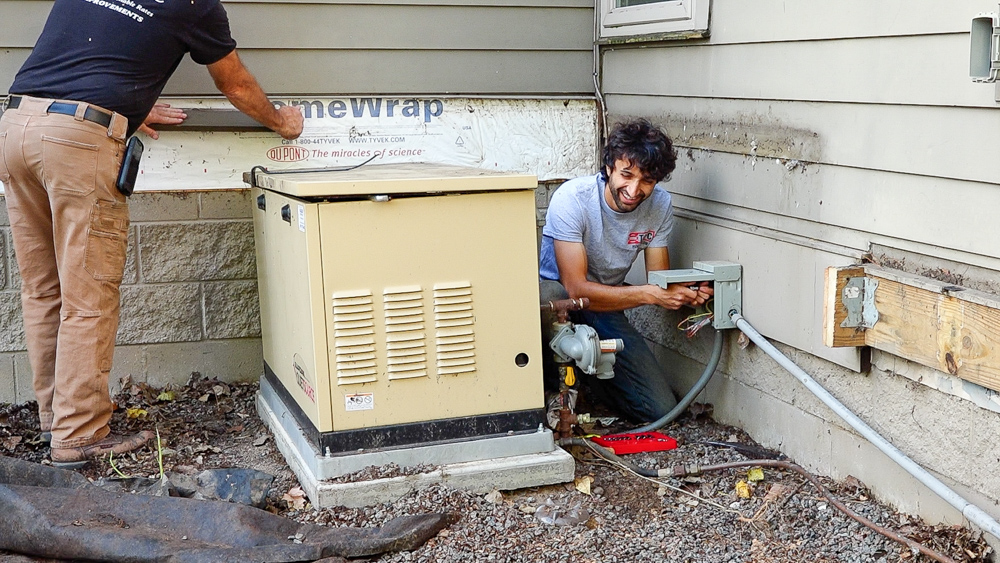 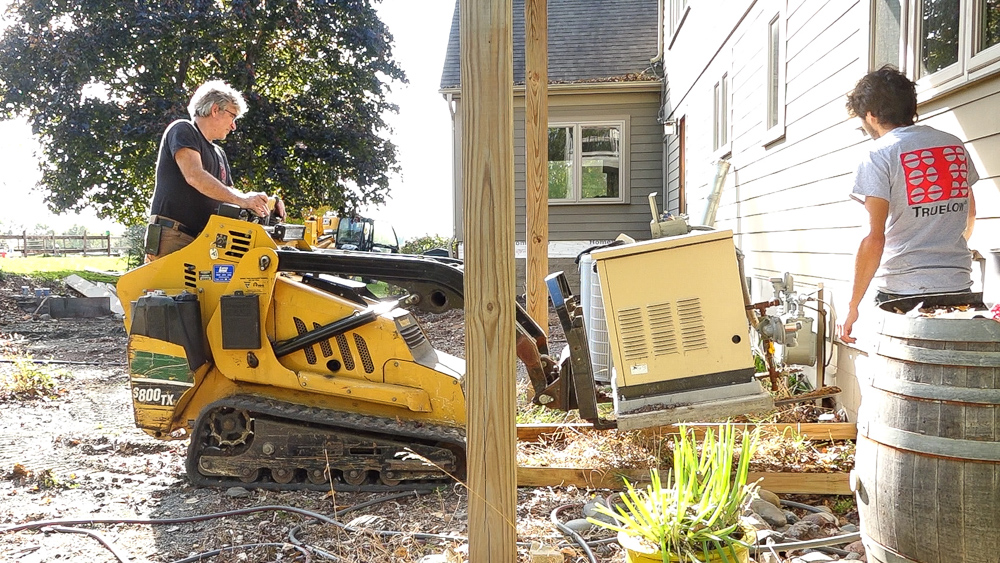 I want to have the generator hooked up before we get into deep winter. It will be nice to have if the power goes out so the furnace would still be able to run. For the next couple of months, we really shouldn’t have any issues with power outages because there’s no storms. 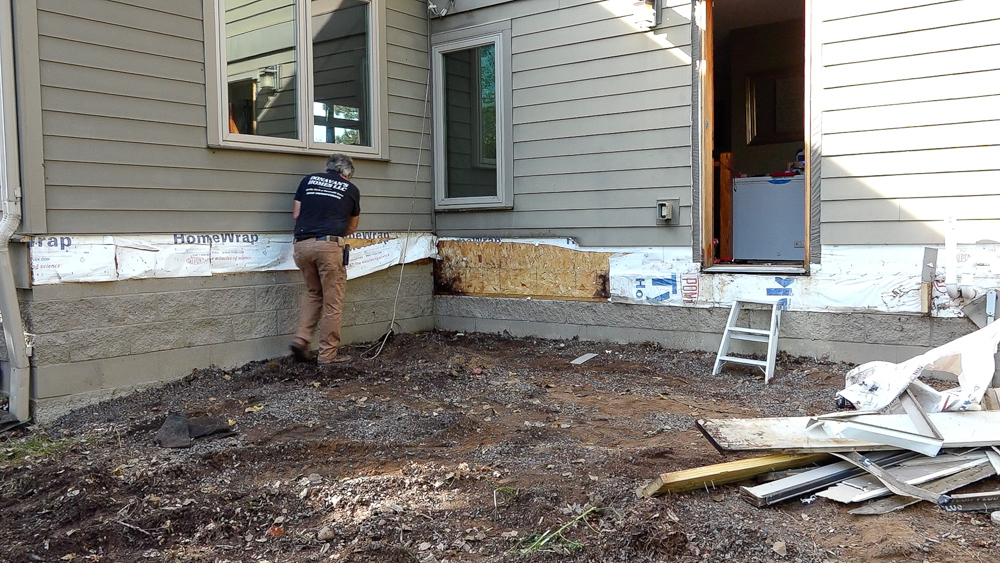 Donavan stopped by this morning to see how things are progressing. While he’s here, he got a little carried away and figured we can start to cross things off the list. We’re pulling off all of the house stuff to expose the rim joist area. 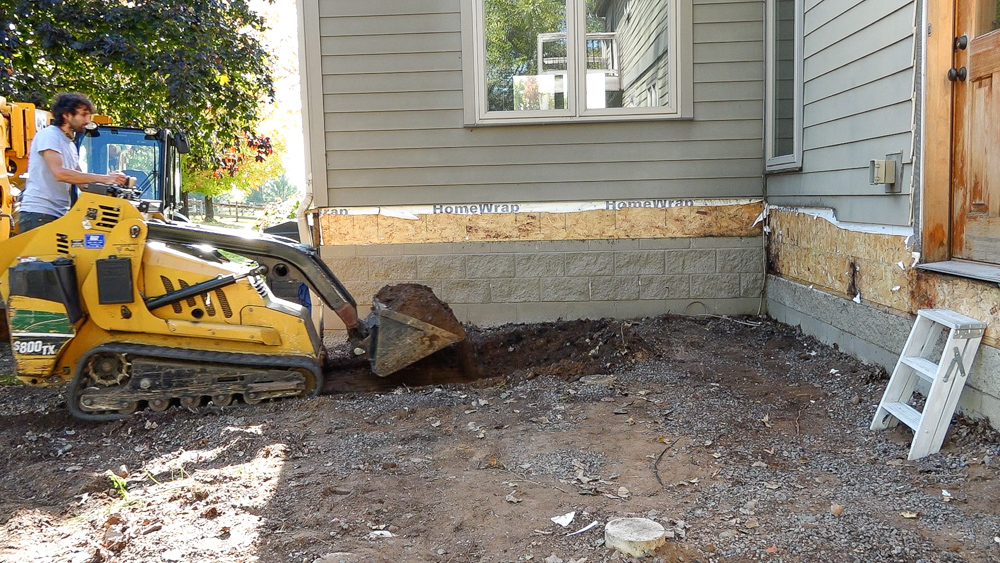 I’m going to bring the skidsteer over and start digging out some of the material to get ahead on the excavation. I excavated three telehandler bucket loads. 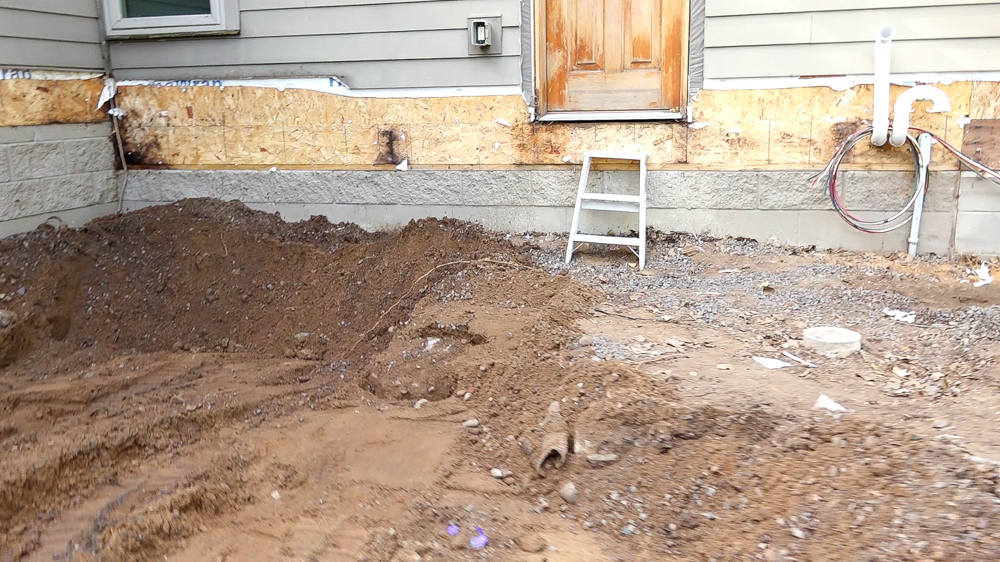 We got a good amount of material out of here. I’m finding all the old footings from previous decks and whatnot. 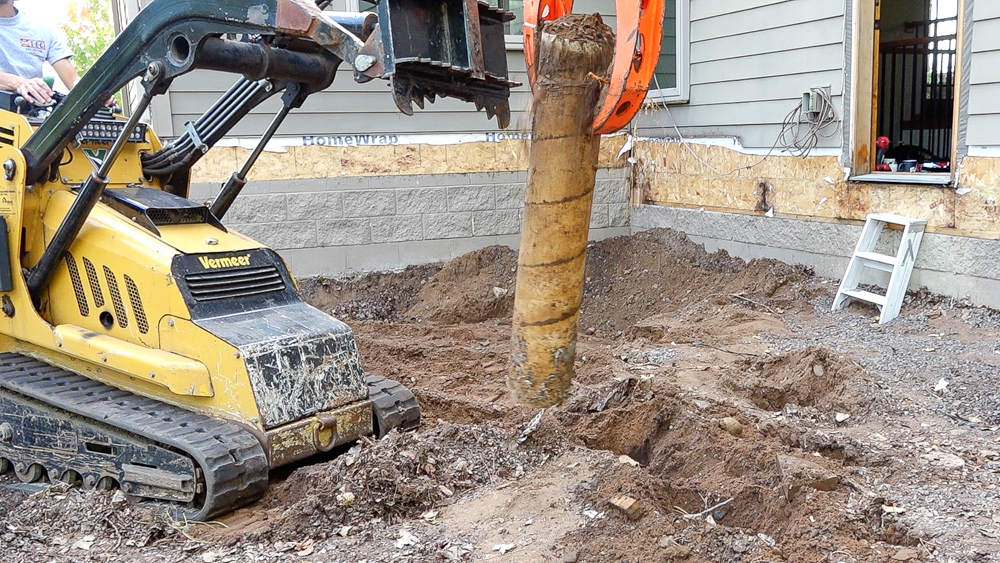 I’m going to pull those out with the grapple. 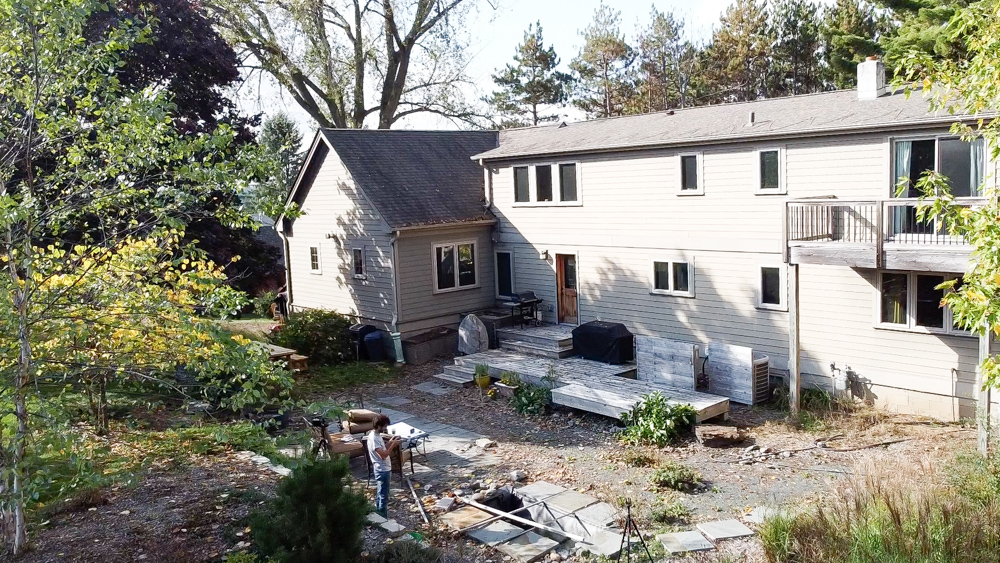 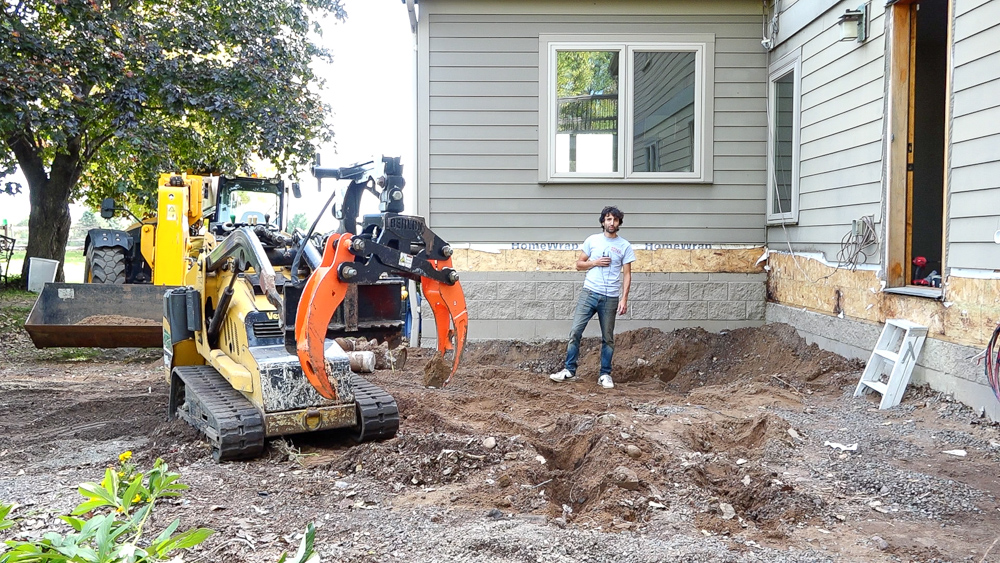 That’s going to do it for all the prep work out here at this point. We moved up the excavator delivery date by one day because things are going smoothly, so next time we’ll be digging a big hole. Let me know if you have any questions or comments. As always, I’ll be happy to answer them. Until next time, happy woodworking!