Welcome back to our home renovation and addition project. 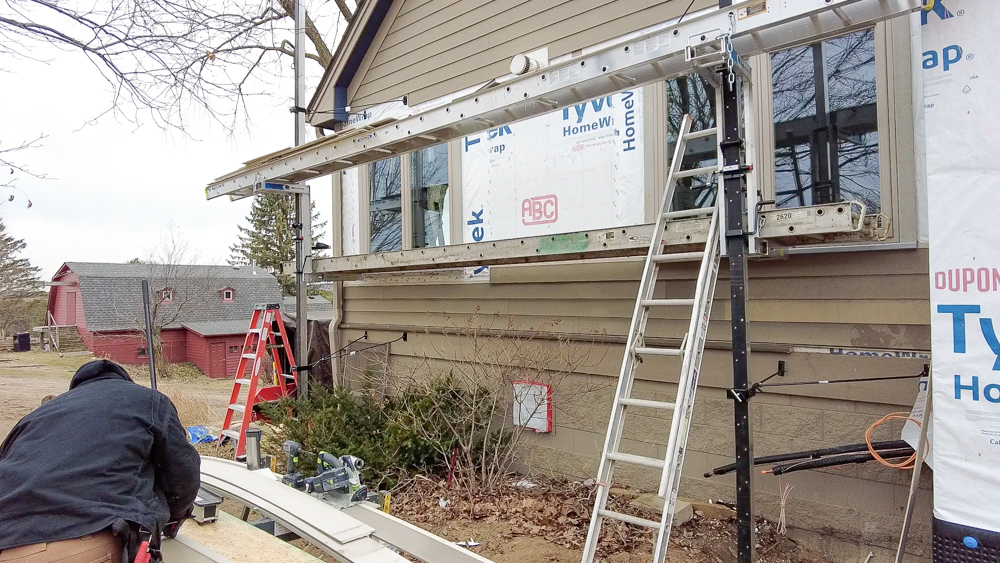 Today, we are back outside working on the window upgrade and getting the siding put back up onto the actual house. We actually started yesterday, and this process is going to be very similar on the front of the house when we patch in the addition there. We’ll probably cover that in a little more detail, but I thought I’d show you a little bit about what we did yesterday. 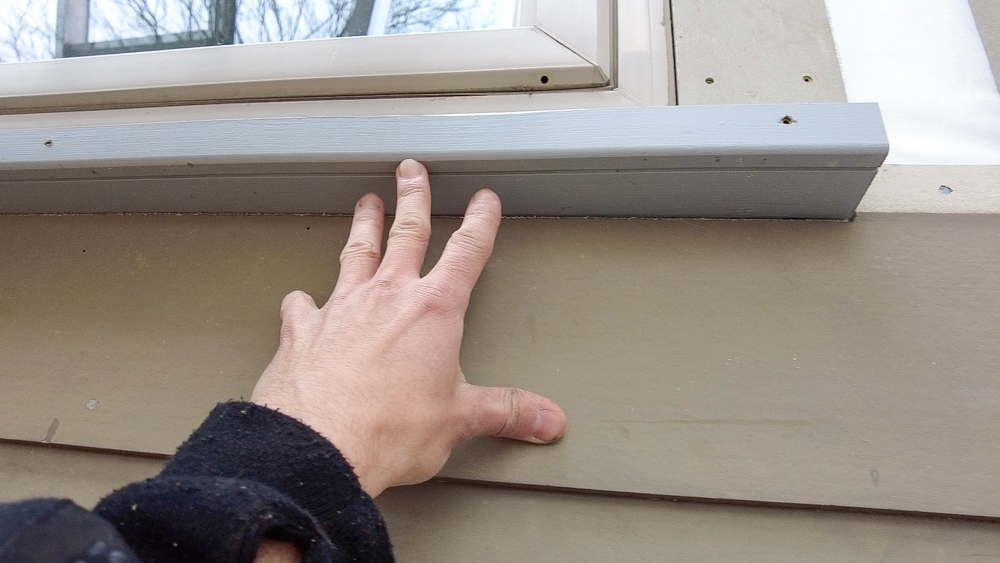 We made and applied these window frames yesterday. These are the pieces of drip edge that go around the bottom, and we have Boral, which creates the frame around those. We made those as a unit, and then set them onto the house and screwed them in place. So now those frames are ready for paint. 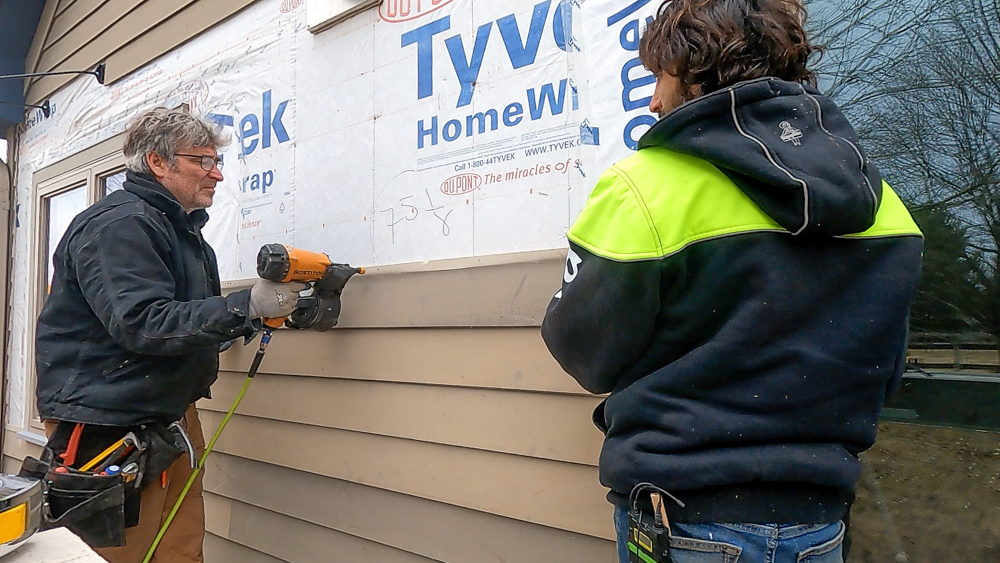 So we’re just going to finish putting the siding up here, which should go pretty quickly. 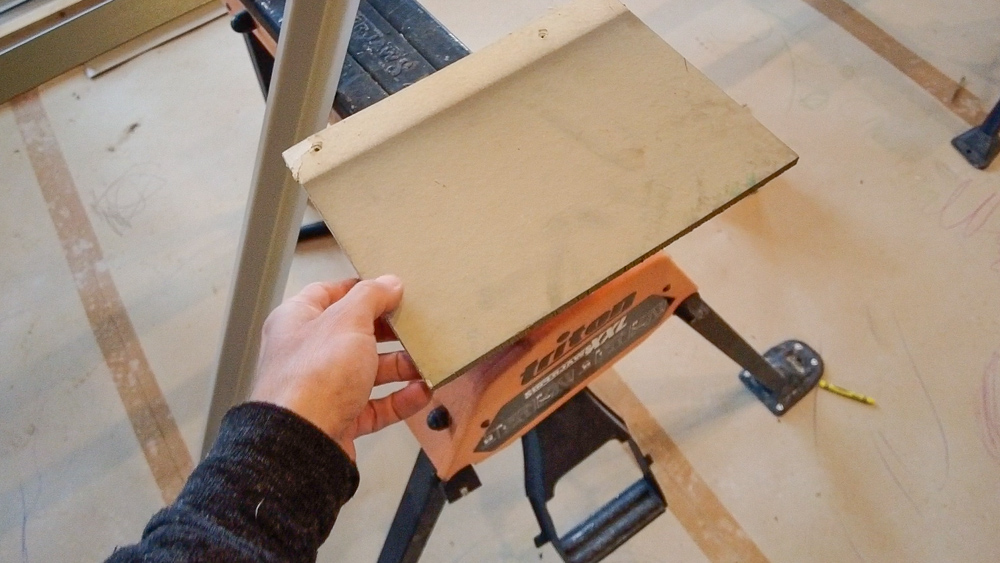 Here’s a look at the siding and the trim. This is a cement board lap siding. It’s in good enough shape even though it’s 15 years old. Just needs some paint. The wall that we are working on right now has a lot more window than it used to, so we have less wall to cover up now. We also removed all of the siding from the wall where the sunroom addition went on, and none of that will be put back on the sunroom addition. That means we have a bigger pool of siding to draw from, and we can pick and choose the pieces we want. That’s why a lot of those pieces are different colors, because they came from different areas of the house where they’ve faded different amounts. 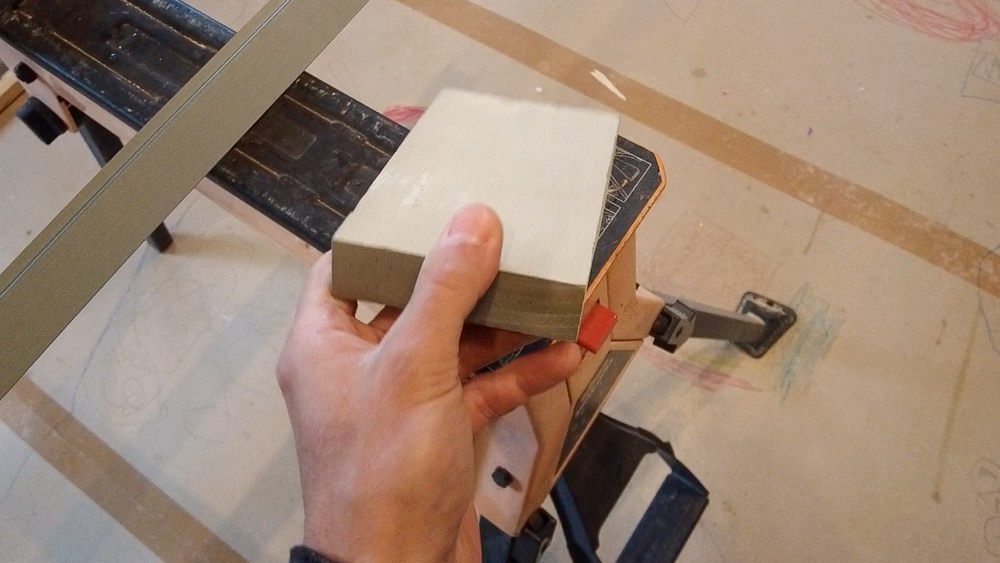 The trim is this Boral, which we talked about previously. It’s made from fly ash. It is cuttable, you can route it just like wood, but it’s made out of fly ash, so it can last forever. There’s a smooth side and a wood-textured side. That’s what we used to join the window frames together; we just pocket holed them together.  We’re going to see a lot more of this Boral because all the trim on the exterior is going to be Boral, with the exception of some cedar. 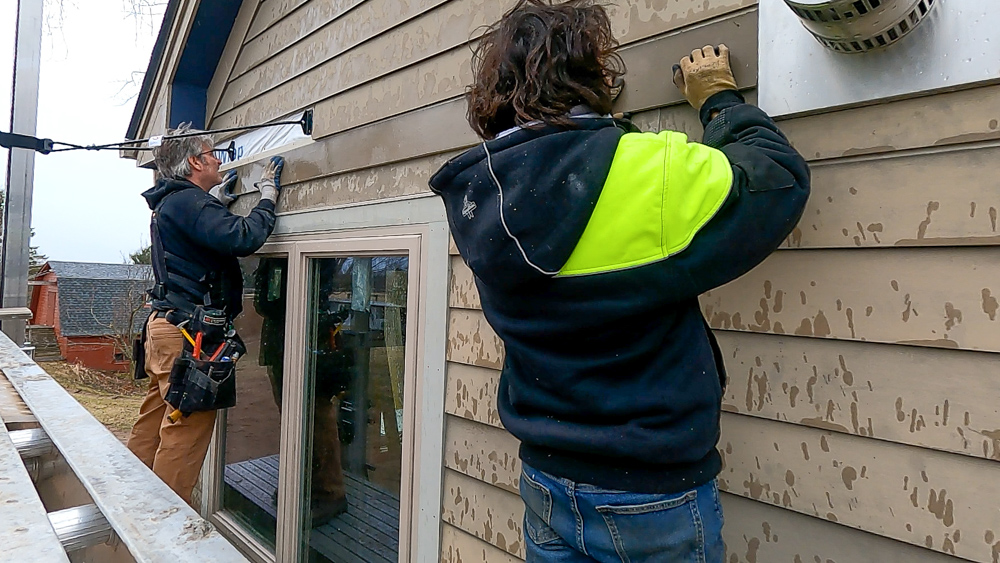 After a brief rain delay, we are finishing up on the siding. 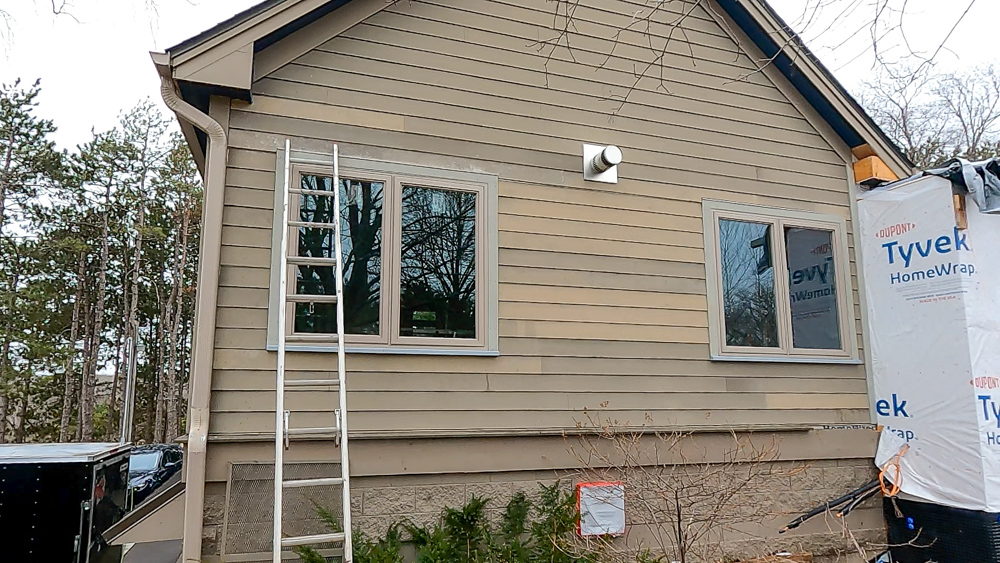 Besides all the desperate need of paint, you wouldn’t know we were here at all.

To end this blog, I’m going to answer a few common questions we have been getting. One was regarding timelines of filming, producing, and publishing the videos. In the description of every video, I put the date that the video was filmed to give an idea of how long things take and how many days went by in that video. I want to give people a realistic idea of how long the various steps in a renovation project take. Most videos end up being about two days per video. We release one video a week, which ends up giving me a buffer of about six to eight weeks worth of videos. That’s nice, because if Donavan is doing another job for a week or so, you’ll never know because the videos still continue to come out on the same schedule. It also helps keep our sanity in the post-production process, because it takes about two days of post-production work. It also allows me to produce two other videos a month besides the renovation project. 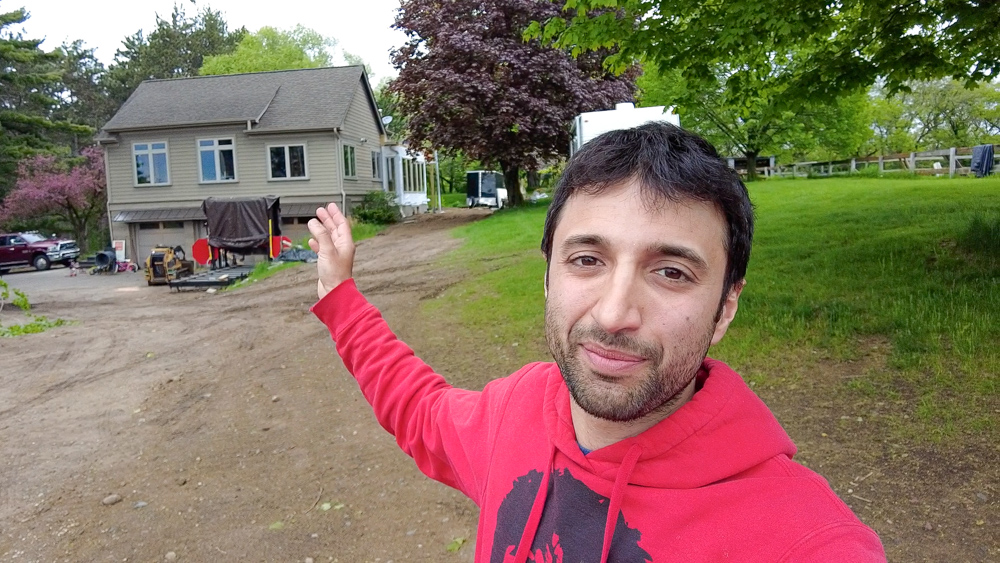 Another fairly common question is how the renovation has impacted our lives living in the house. We’re very lucky and very fortunate in the way that this all came together, and the renovation hasn’t really done a whole lot to impact our day to day lives inside the house. The addition is really only affecting the main level of the 2008 addition. The 1960s house is completely unaffected, and that’s where the majority of the house stuff is. So we have a fully functional kitchen and dining room, and the bedrooms are unaffected. My shop is in the garage, which is unaffected as well. 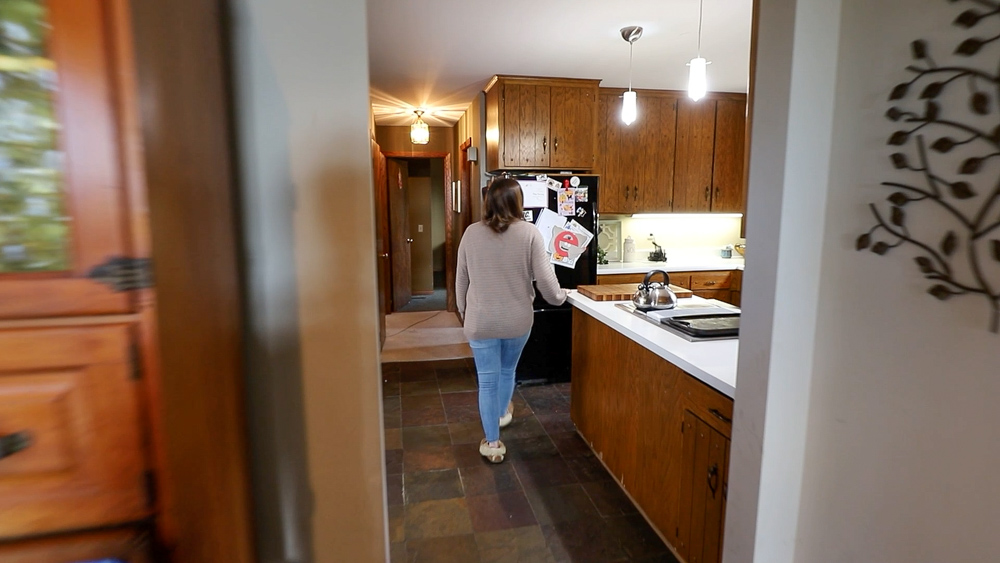 The first thing Donavan did before we did any demo inside of the house was move the back door to between the kitchen and the entryway, which sealed off the construction from the rest of the house. The only big impact is that we have less living space because we don’t have the great room anymore, and the entryway to the house is crammed into the same room as the dining room right now.

Third question is who’s Donavan and how do I know him? Donavan and I met six years ago. He reached out because he had a tree in his backyard that was dying, and he was having it removed and wanted it to become something else. He wanted to try cutting it into lumber, and at that time I was building my saw mill. He was thinking if we timed things out right, we could get this log onto the saw. The tree was so big that a lot of the limbs from the main trunk ended up going pretty much vertical. When that happens, they’re not really limb wood, they’re basically small tree trunks on top of a bigger trunk. So he had all these trunk pieces in his front yard that he ended up cutting up into cants. So he got himself a chainsaw mill, cut them up into squares, and he put them on my trailer and brought them up to my place. If you go back and watch the live stream where I turn on my saw mill for the first time, Donavan stopped by during that stream. So he is in that live stream. 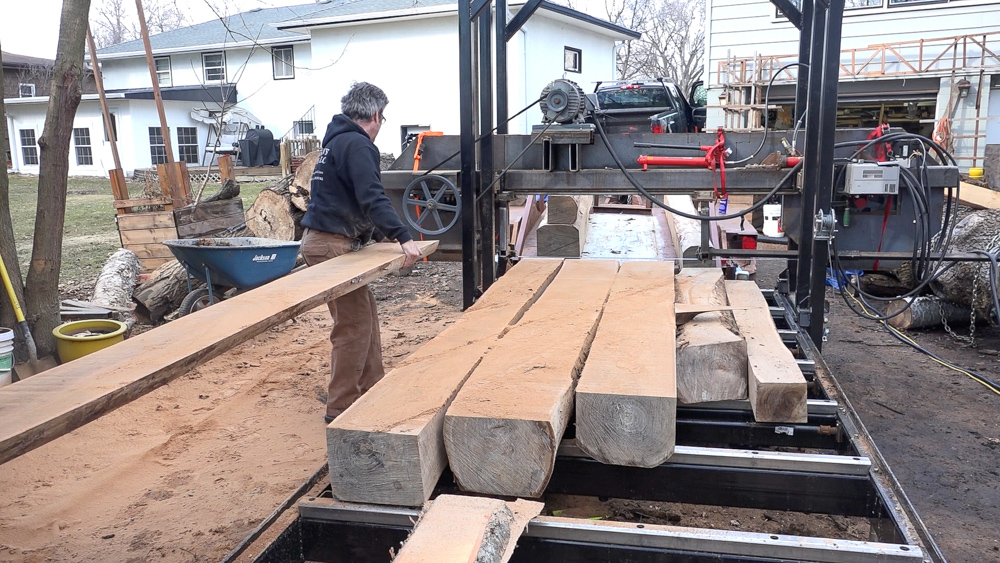 A couple months later, after I got the saw up and running, I started cutting all the small stuff. So the cants that he cut from the top section of a tree are the square cants that I put onto the bed of the saw. I lined them all up and got my max cut width, so he was there for that too. 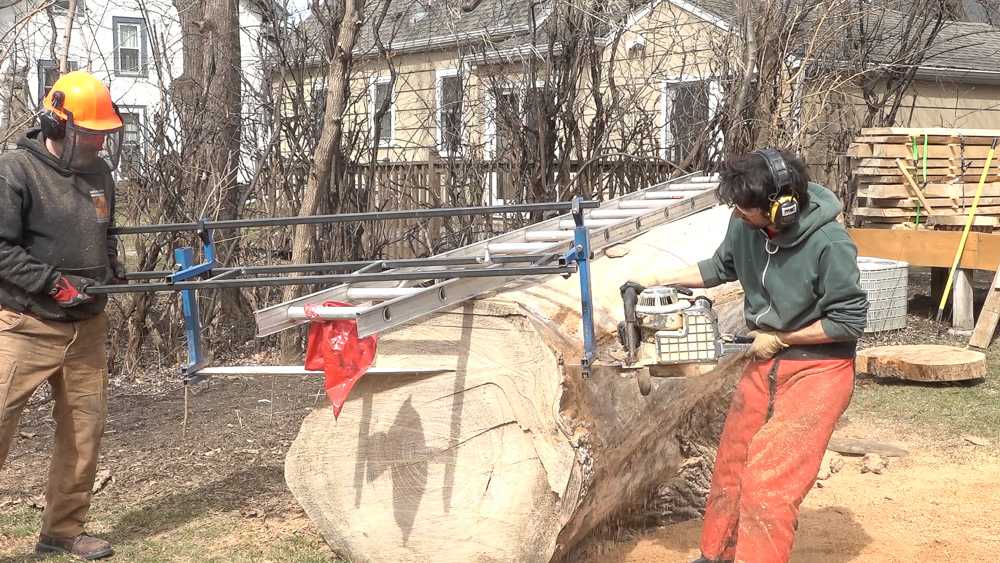 In April of that year, we started cutting up the log that was the main trunk of the tree in his backyard. It was too heavy for the crane to actually lift up out of the backyard, and nothing could really get in there to lift it out. We ended up using the chainsaw mill to remove some of the material and cut it into slabs to drop some of the weight. Then he was able to get the remainder onto my trailer with a Bobcat.

So the two of us met because of a tree, and we stayed friends over the years. If he was ever in the area, he would stop by with coffee and donuts, and we’d hang out and talk for a bit. So you can find him in various videos throughout the years. He’s been a recurring character for a long time.

Thank you, as always, for joining me, I greatly appreciate it. If you have any questions or comments on the home renovation/addition/remodel project, please feel free to leave us a comment. As always, we’d be happy to answer any questions you might have. And until next time, happy woodworking!

10% off in stock chair kits with coupon code CHAIRS Dismiss