Welcome to my backyard and to our home addition project! Last time we did a rough excavation, and today we’re going to get started on the final grading and getting our footings installed. 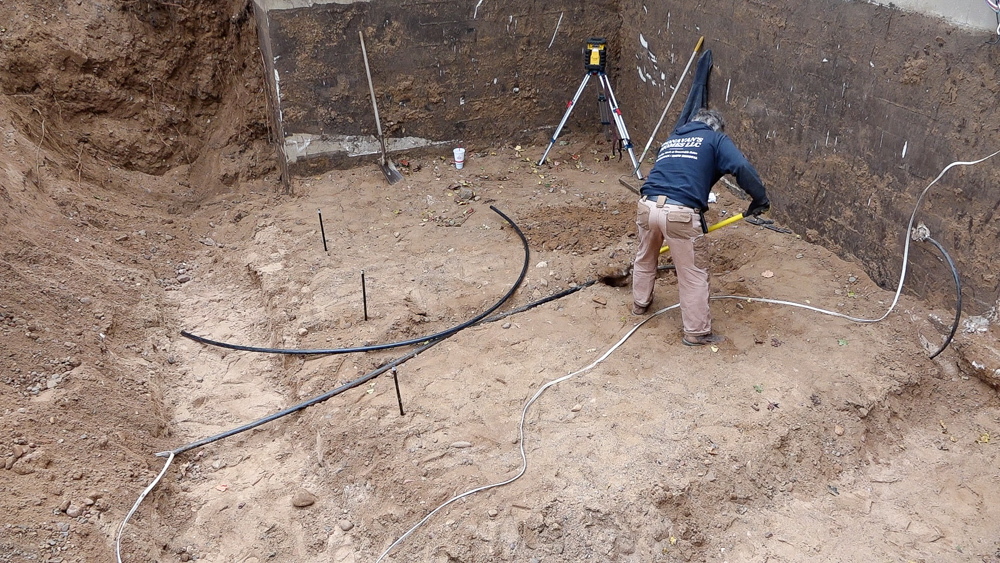 Our first task today is to do something about this water line, which goes out to the well. It happens to be right smack dab in the middle of where our footing needs to be, so we are going to try to dig it down a little bit so we can sneak it under our footing and not have to splice in some new material. I’m going to go grab a shovel and make myself useful. 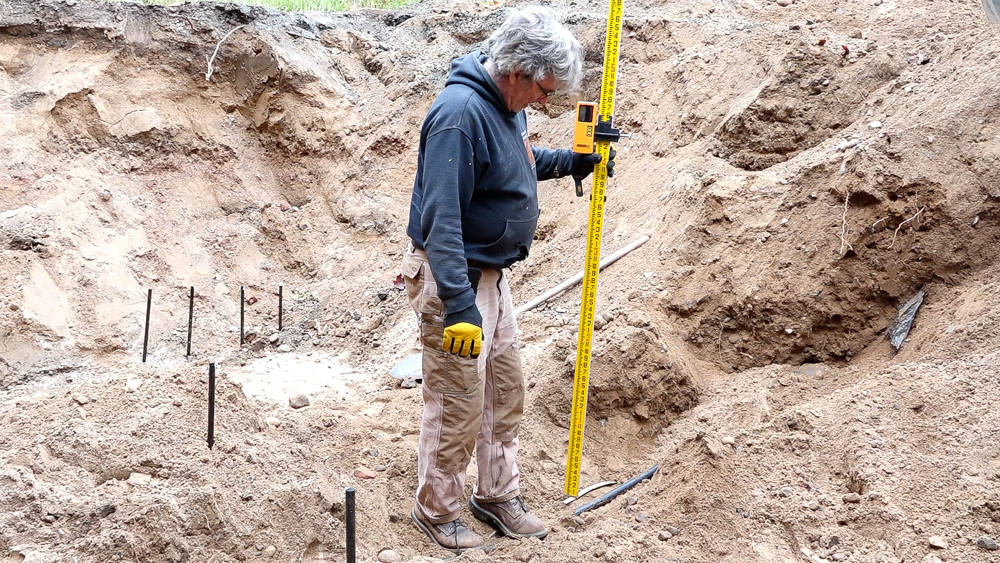 Took a little trial and error (and some more excavator work) to dig it deep enough, but Donavan thinks that we are deep enough for now. There might be some adjustment in the future. 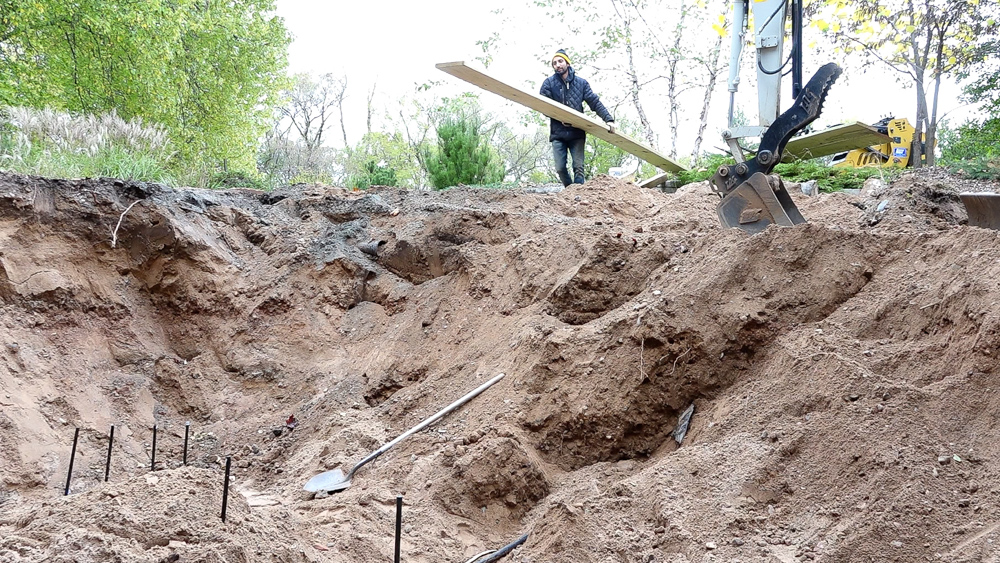 Next up, I grabbed the lumber to start setting the footings, which will allow us to get more precise numbers. 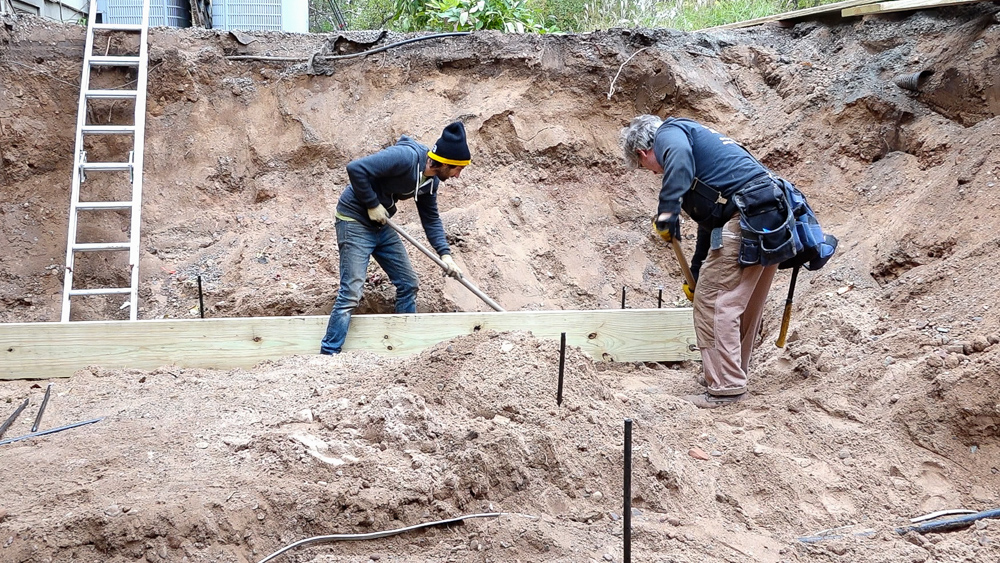 After taking some more measurements, this end has to go two inches deeper into the ground. 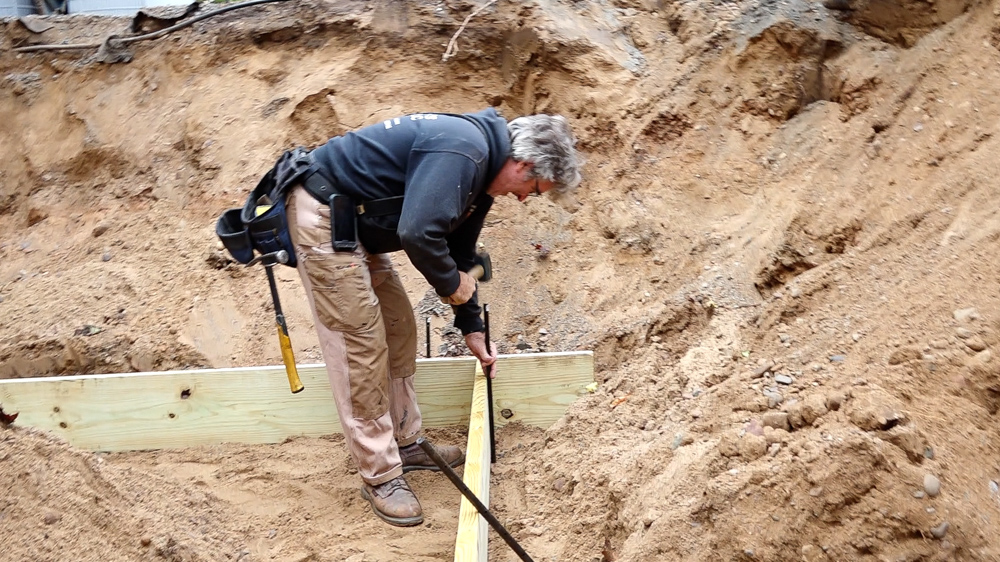 We are continuing to get the forms put in. 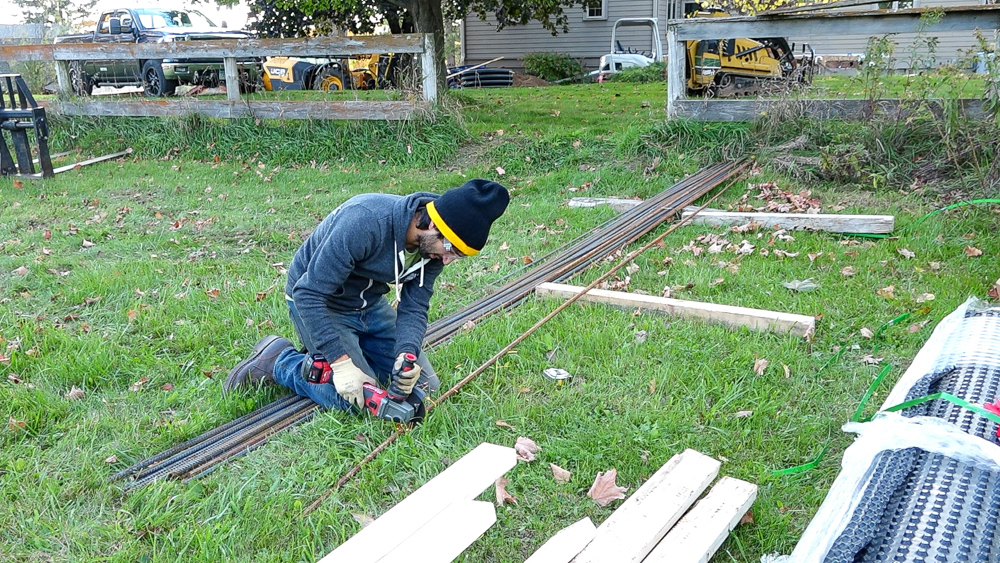 Next I’m going to cut some dowel pins, which are going to tie our footings into the existing house. I have to get five two-feet lengths of the 5/8 rebar. 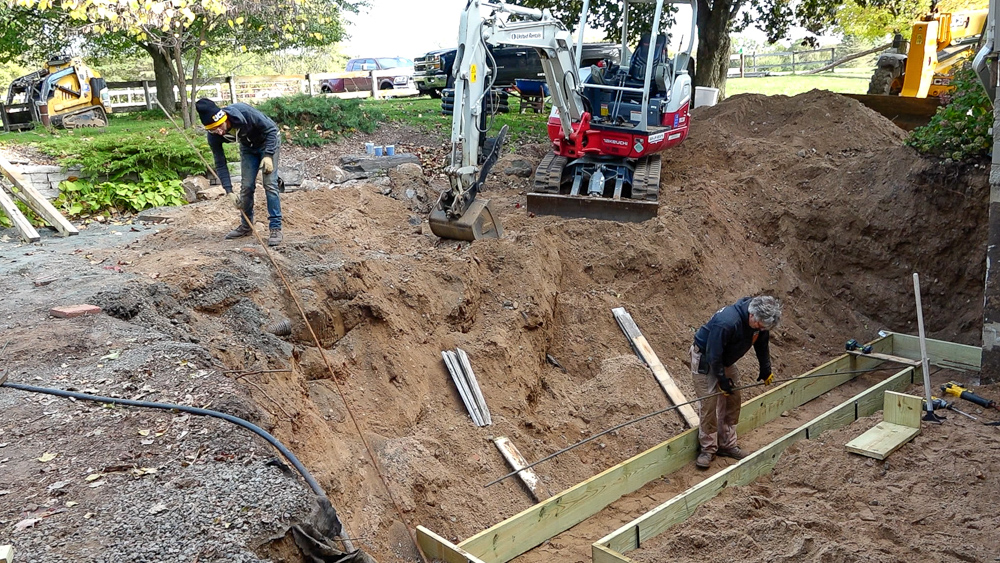 We’ll also start dropping in the straight pieces of rebar.

Happy Friday, everybody! Today is a bit of a different kind of day. So far it hasn’t been super productive in the sense of things happening down here in the hole, but we had our site visit with Chris, the architect, this morning. We started talking about some of the interior design, which is exciting. 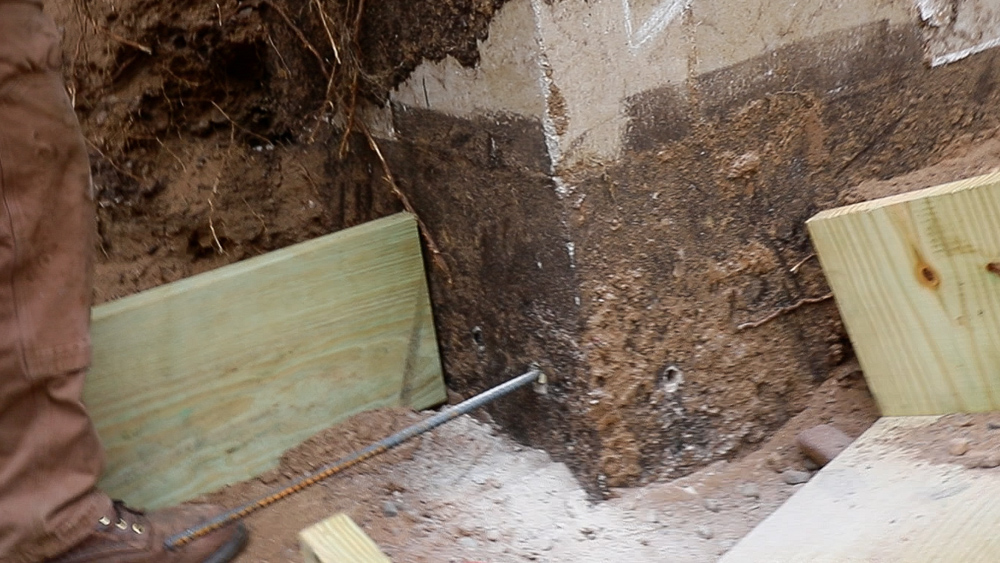 We also had an interesting development with the tie in to the existing structure. We found out when we drilled these holes yesterday that this corner is hollow. 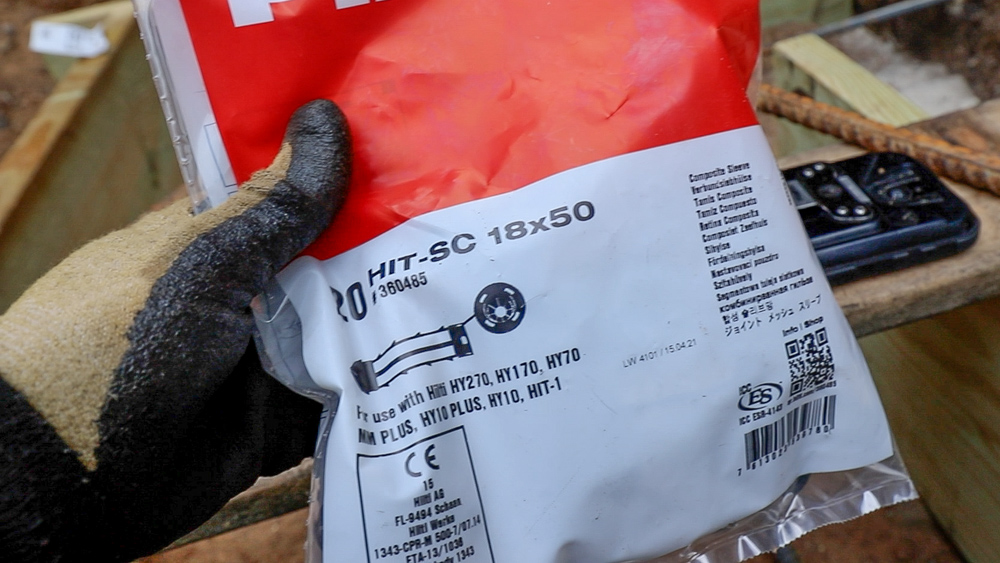 The engineer has specified that we should use these epoxy screens. 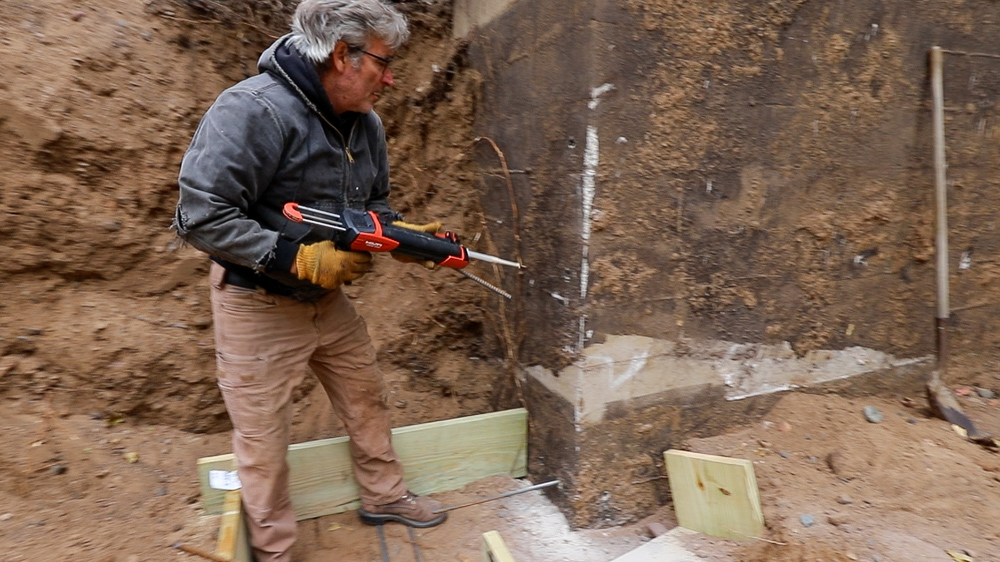 This thing gets pumped full of an expanding epoxy and then put into the hole. When the piece of rebar goes in, it forces that epoxy through the screen and becomes like a wedge or plug. It took Donavan a very long time to find these epoxy screens. He’s been here for six hours, and so far we have drilled a couple of holes. Once we get these installed, then we can actually start forming up the rest of our rebar. 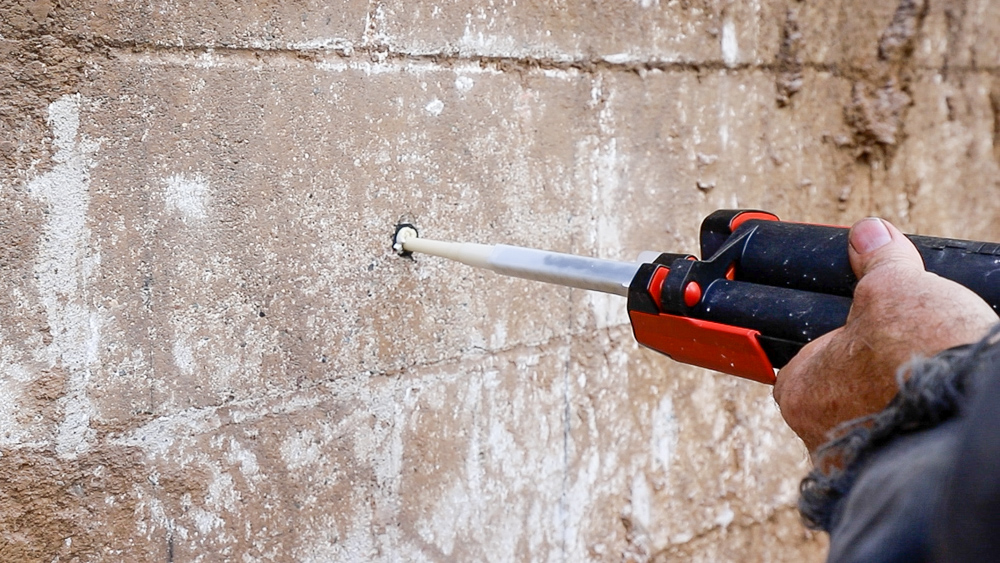 We have this fancy epoxy gun, which will fill the hole up with a nice epoxy and then we can push the rebar in. While Donavan works on that, I’m going to cut some more rebar. 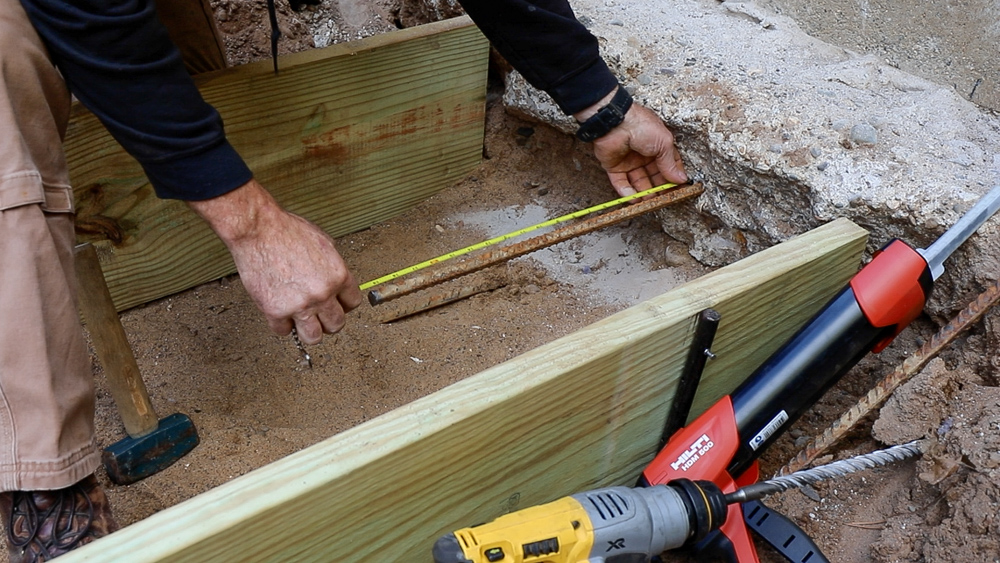 Now we are doing the tie-in to the vertical wall face, where the deck used to be.  We’ll tie into the footing here and all the way up the wall. 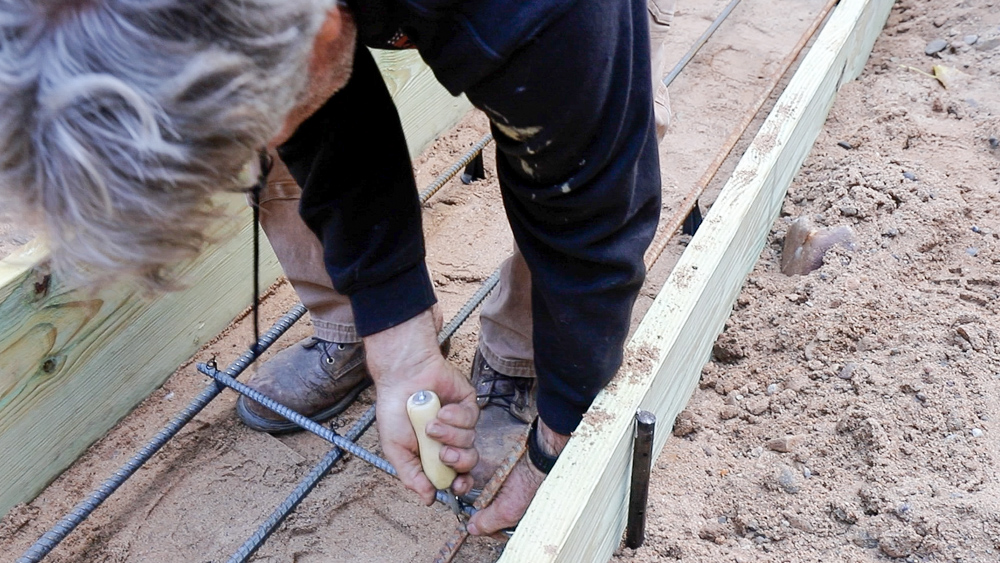 We’ll get the rebar in the footings up on chairs and tied off so they can’t move. 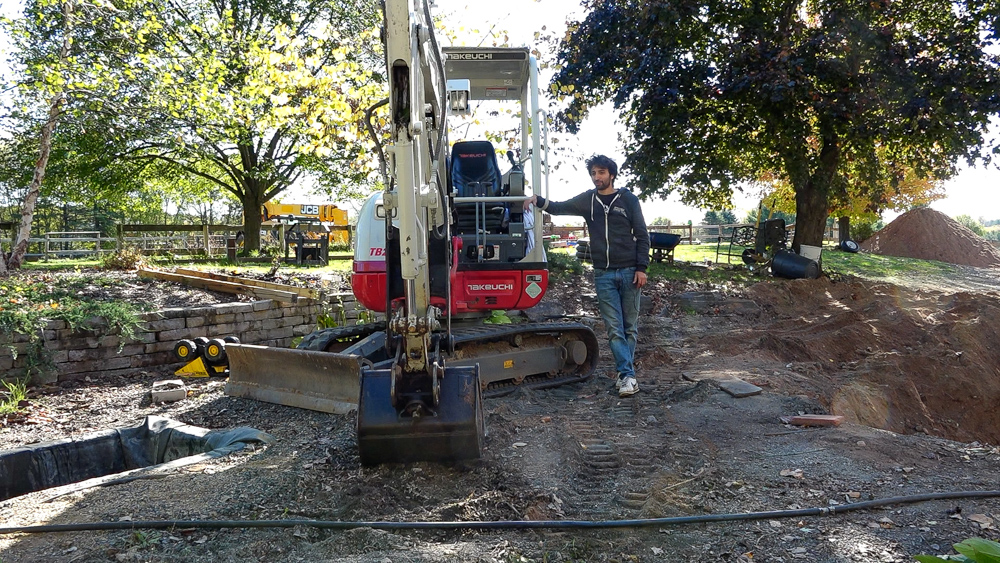 Happy Sunday, everybody! I’m out here trying to clean up and finish up a few things that Donavan doesn’t need to be here for. 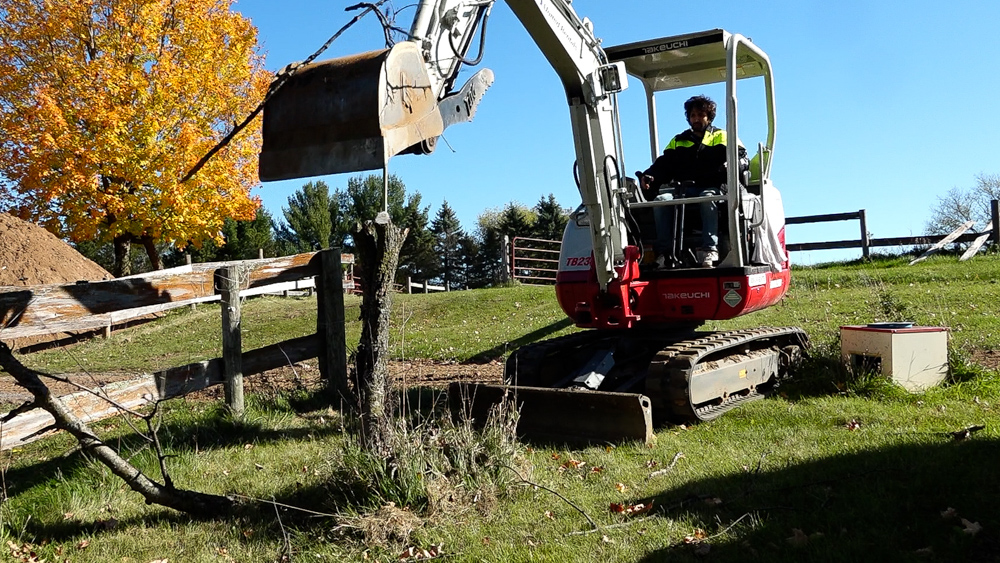 I also took advantage of having the excavator to do some quick tasks with it, before it has to go back. I pulled out a tree over by the log area, which I thought would be a quick scoop out of the ground, but that tree was a little bigger than this machine could easily handle in one scoop. It required a little bit more digging than I expected, but it was still easier than doing it by hand. 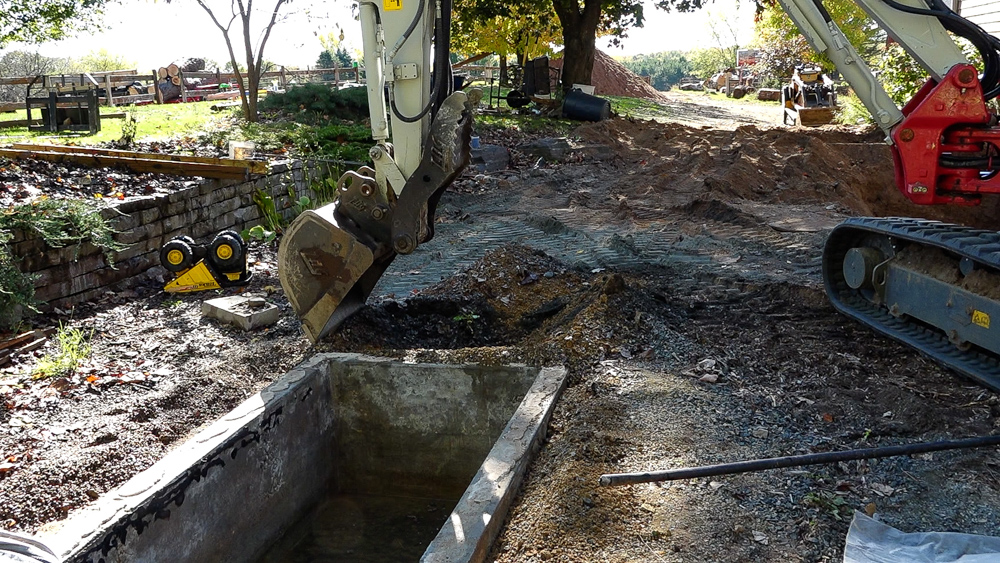 Next up, I’m going to take out the frog pond. It’s a pretty cool little pond, but my three kids just can’t leave it alone, so it’s coming out. This is a solid five-sided concrete box. 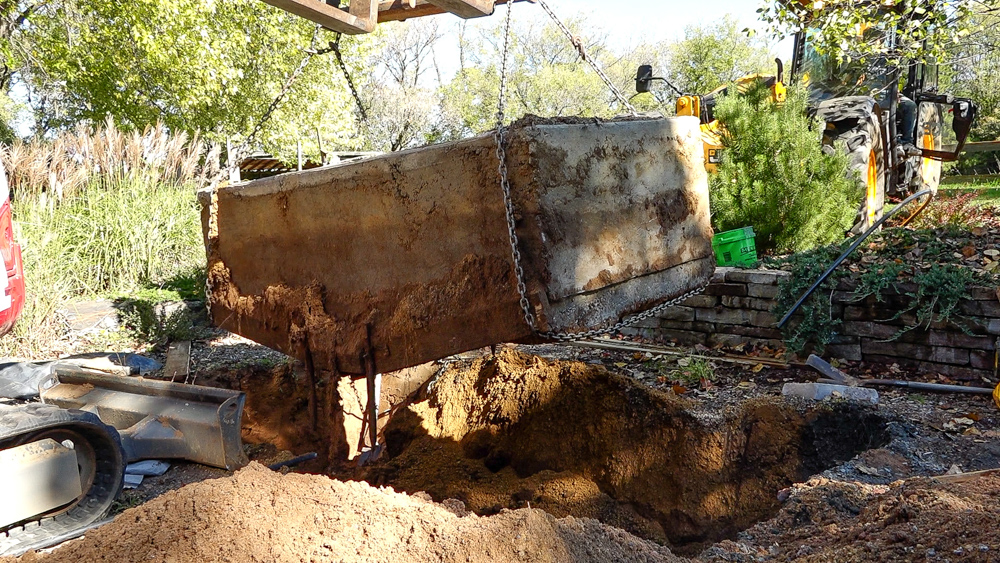 I could bust it up, but I want to pull it out whole for some reason. Don’t ask me why, I don’t know. I’m going to dig around each side, and then we should be able to pull this thing right up out of the ground. 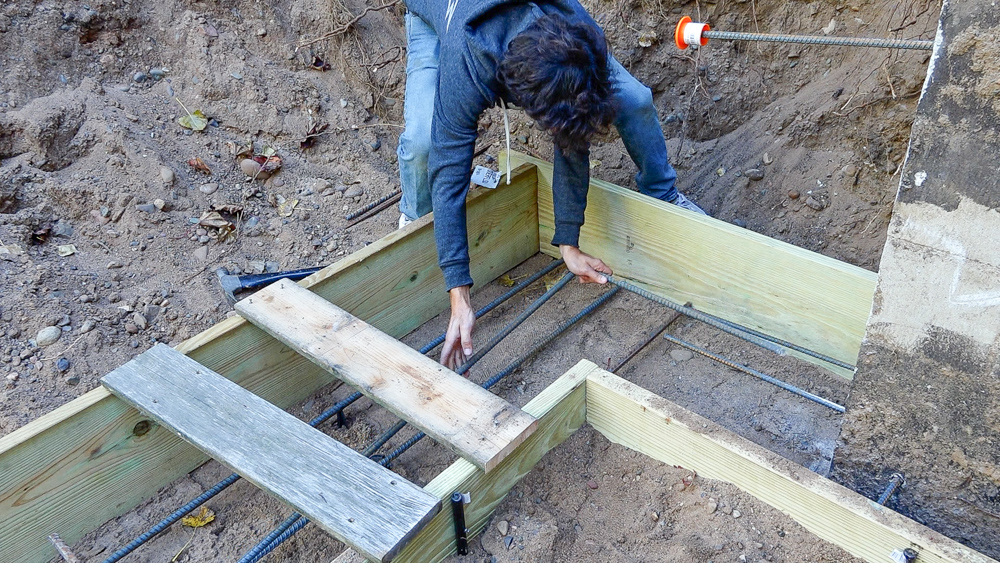 After taking out the pond, I’m going to hop down back into the hole and finish up some of the form work. Tomorrow, Monday, we won’t be working in the hole. The ICFs are being delivered tomorrow, and then that’s pretty much it, because our pour isn’t until Tuesday afternoon, after our footing inspection in the morning. That’s kind of how these things go: you get a lot done, then you’re waiting around for things to happen for a few days. 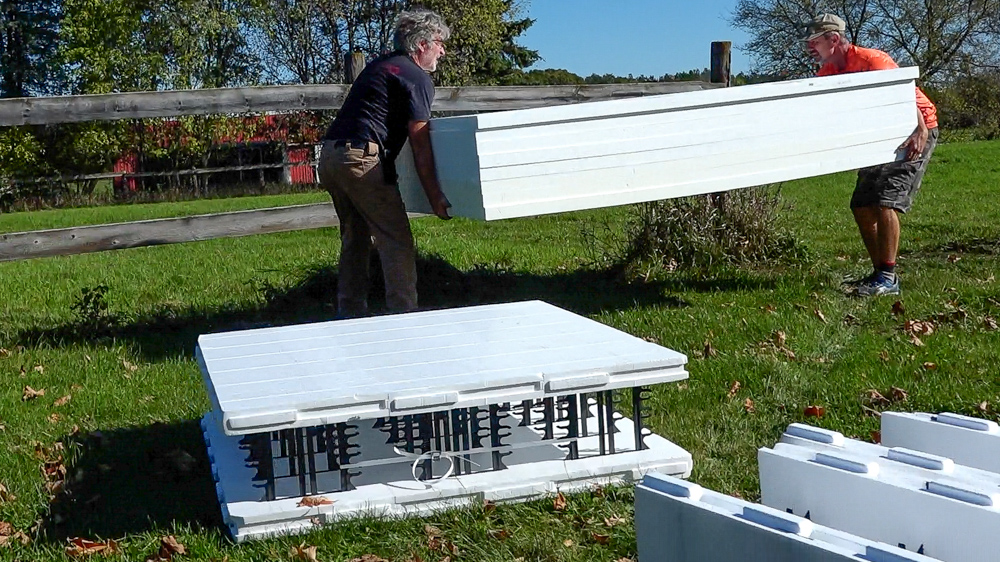 Happy Tuesday, everyone! Let me catch you up on what’s been happening the last couple of days. Sunday I finished up all the forms. Yesterday, Monday, we had the delivery of the ICFs, and we tweaked the forms a little bit. The ICFs are super light, obviously, because they’re mostly foam, so it was very easy to get them off Brad’s trailer. Brad spent some time with us, walking us through a lot of the questions we had about the setup of the forms. That was one of the biggest selling points for us: finding a form seller that would offer some support for people who haven’t really done ICFs before. We’ll talk a little more about the ICFs later this week as we go to install them. 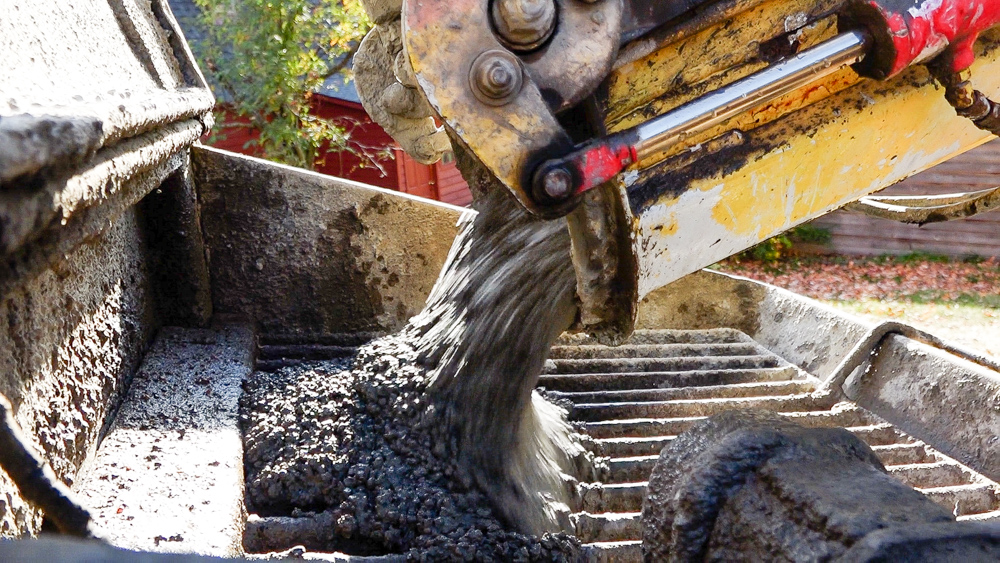 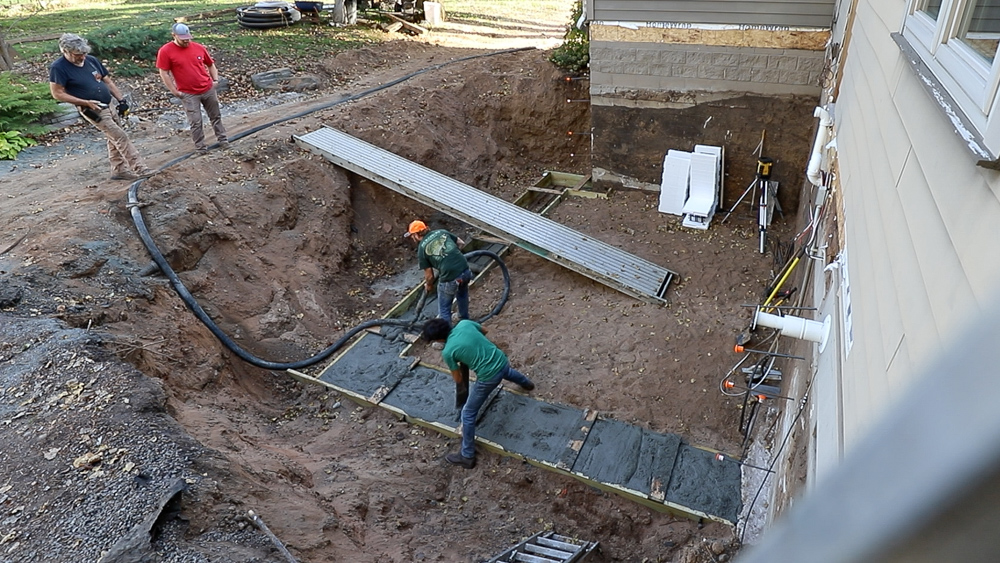 The pump operator filled the forms while I massaged the concrete under all the spreader boards and removed air pockets. 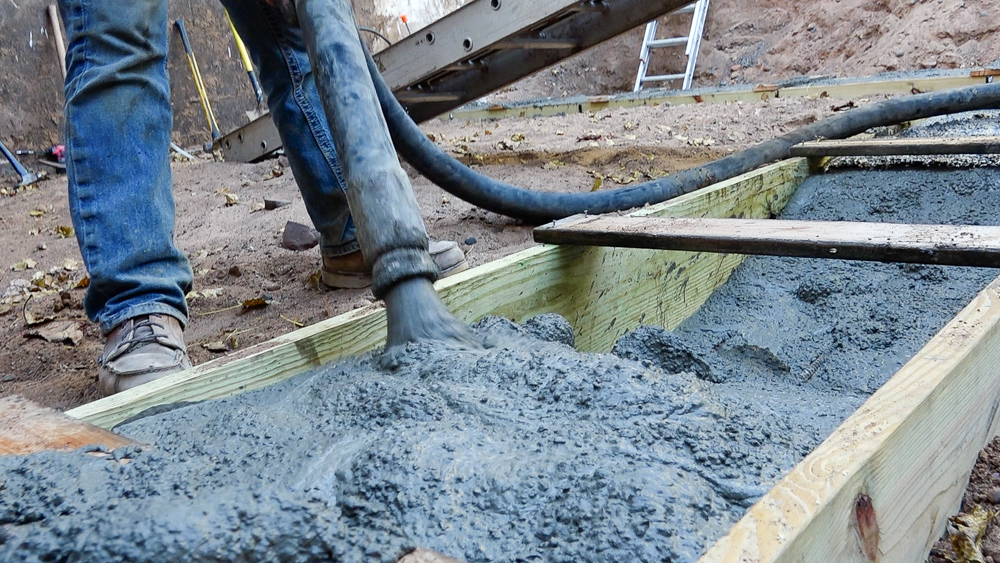 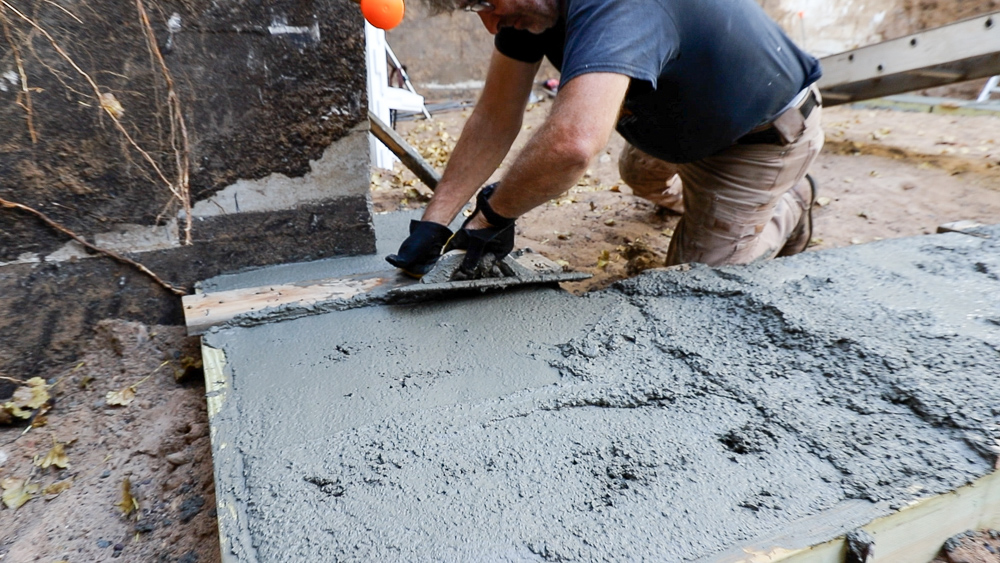 After the forms were filled, Donavan came through to screed and trowel the surface. 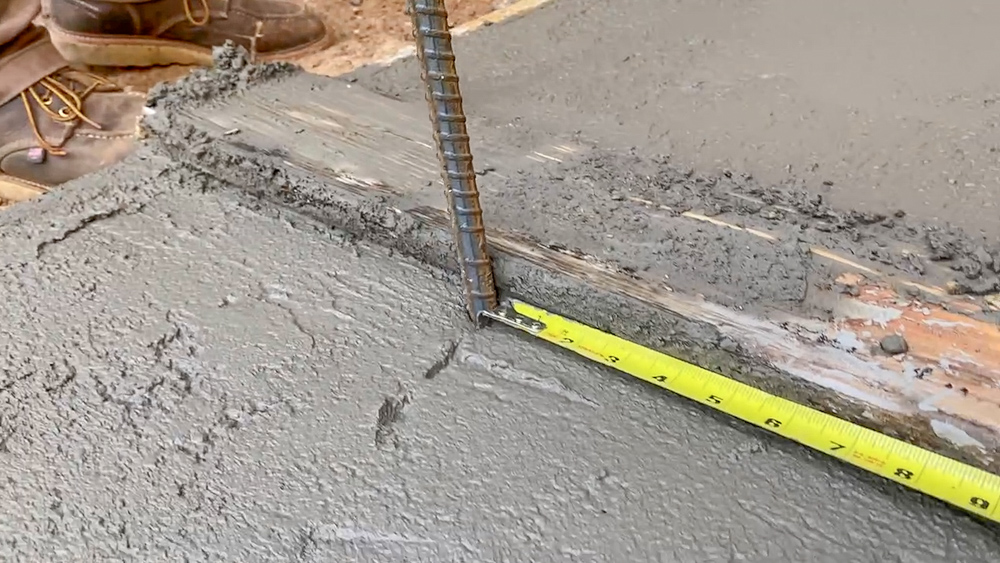 Lastly was to wet set the vertical rebar.  We laid out the positions onto the forms before the pour so all we had to do was drop the rebar centered into the footing. 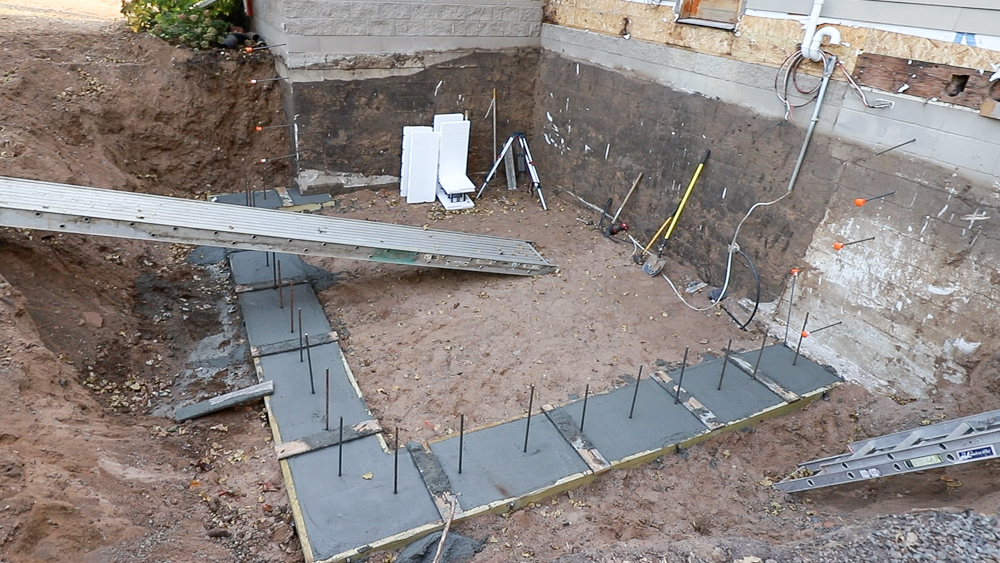 That takes care of all the footing work! Tomorrow we’ll start stripping the forms and start laying out our walls. That should be fun!

Thank you, as always, for coming along on this adventure, I greatly appreciate it. If you have any questions or comments on the home addition or anything in the shop or anything else, please feel free to leave me a comment. As always, I’ll be happy to answer any questions you might have. And until next time, happy woodworking!