Welcome back to our home addition/remodel series. 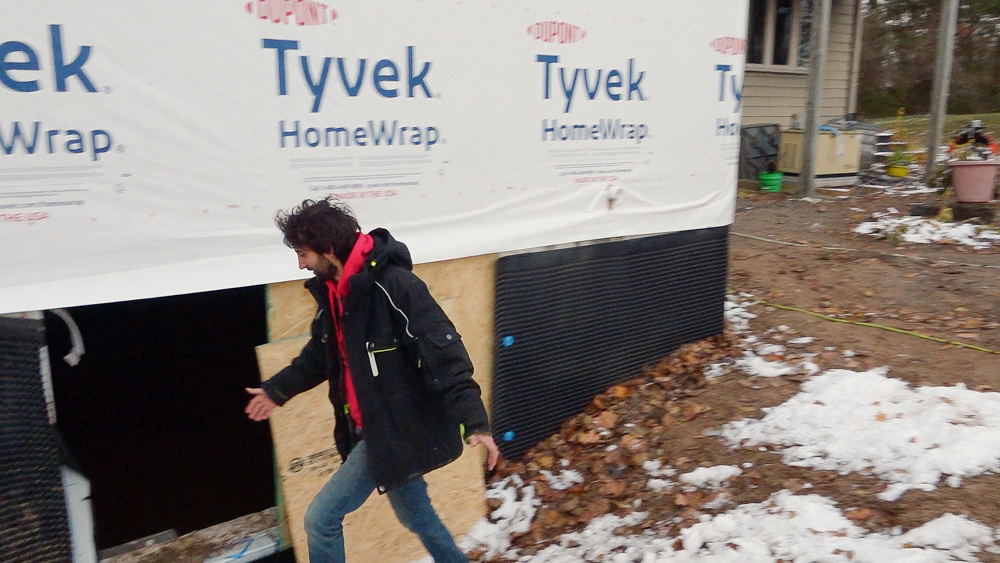 One of the most popular questions that we have gotten throughout the build as we were installing the basement and putting the sunroom on top was how we’re going to get into the rest of the house. Is this going to be our only access or what? Today we answer that question. 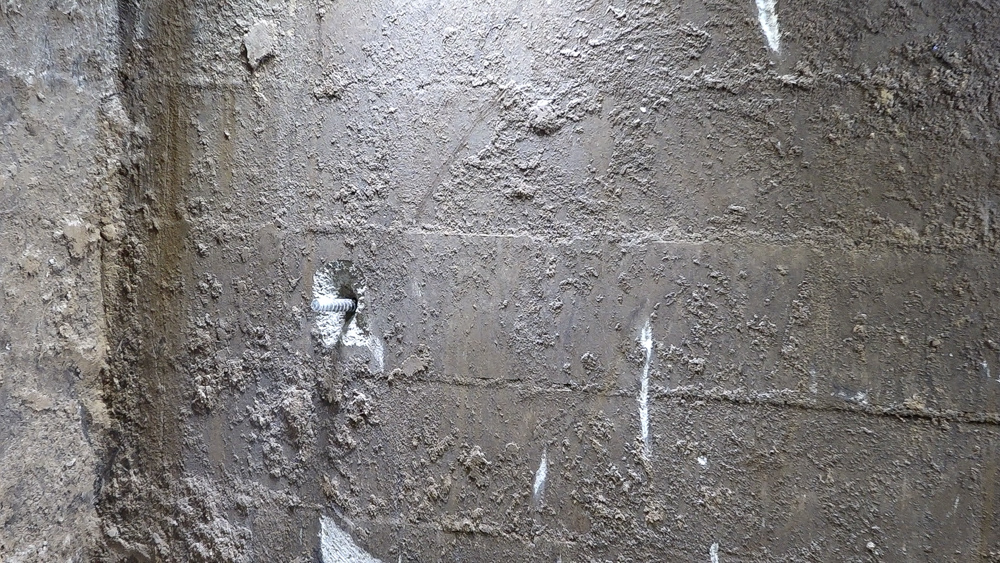 First, we’ll make a pilot hole on the inside to verify where we’re at, and then we’ll come to the outside, lay out our door, and we’ll leave a little bit of the wall intact because we’ll have to support the wall up above, short term. 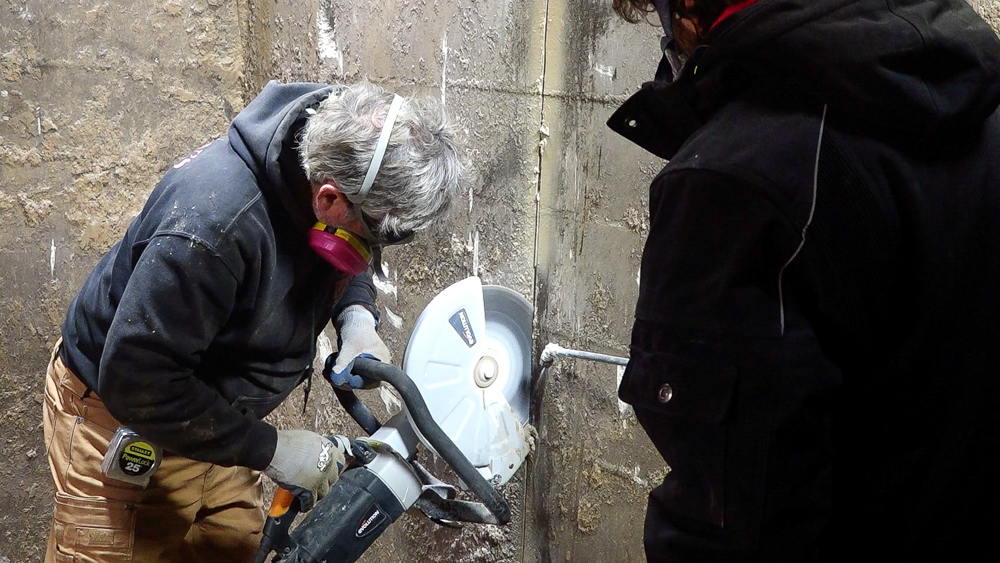 The full term plan is to cut all the way to the corner of this wall, but in the meantime we are leaving a little bit of the corner in place until we have it supported with our framing. But today’s all about opening it up so we can actually get in to the addition, and have heat in here. 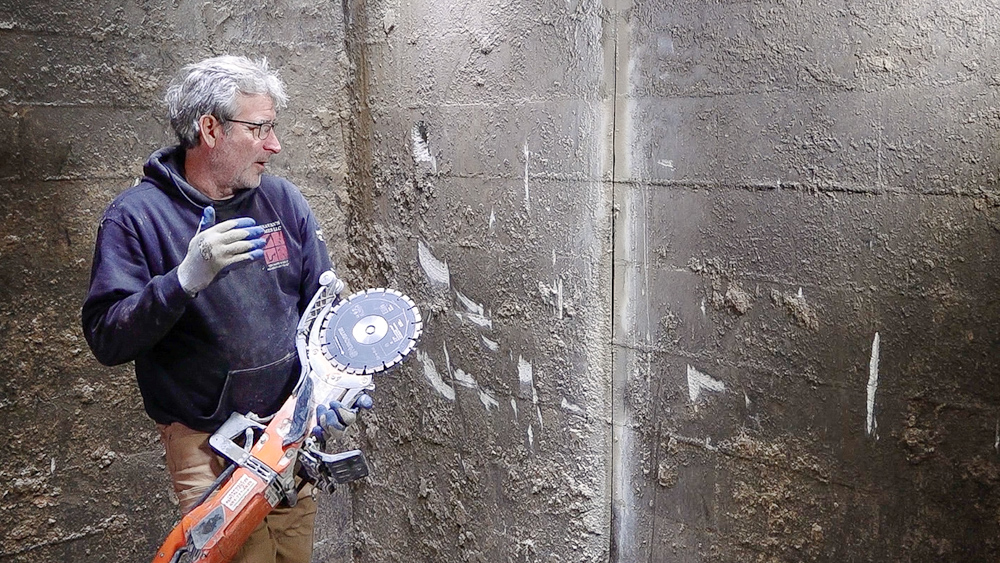 We’ve had a little change of plans here. We had a small saw that was available to us, but we’ve found out that the two places we want to make our cut are both core filled. Mortar is filling the cores of those blocks completely. The spot where we drilled our pilot hole wasn’t core filled. It’s common to reinforce the walls by filling a core up every so often, and we’ll find out how many they filled in here. So with the smaller saw, we weren’t able to get in so deep and break it up. 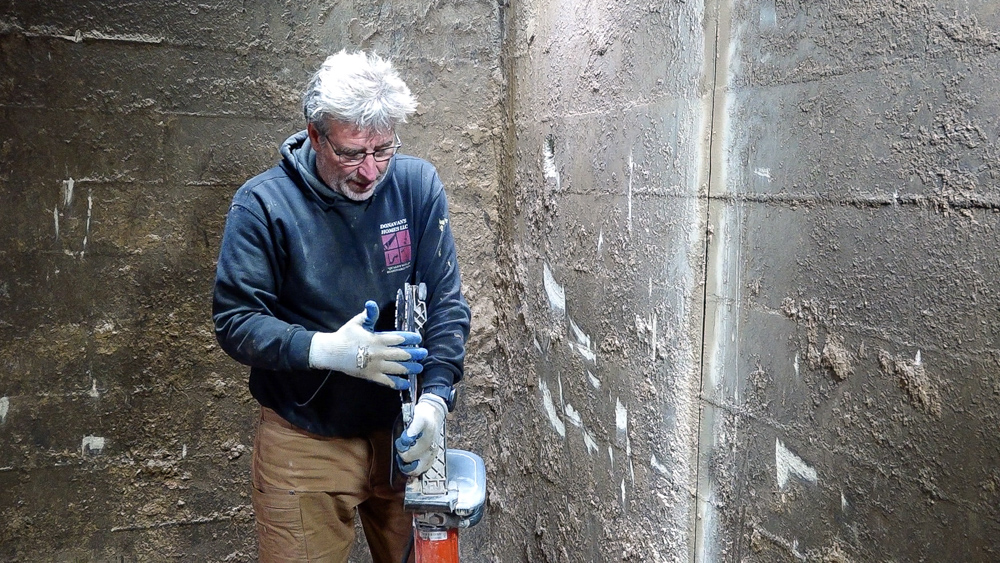 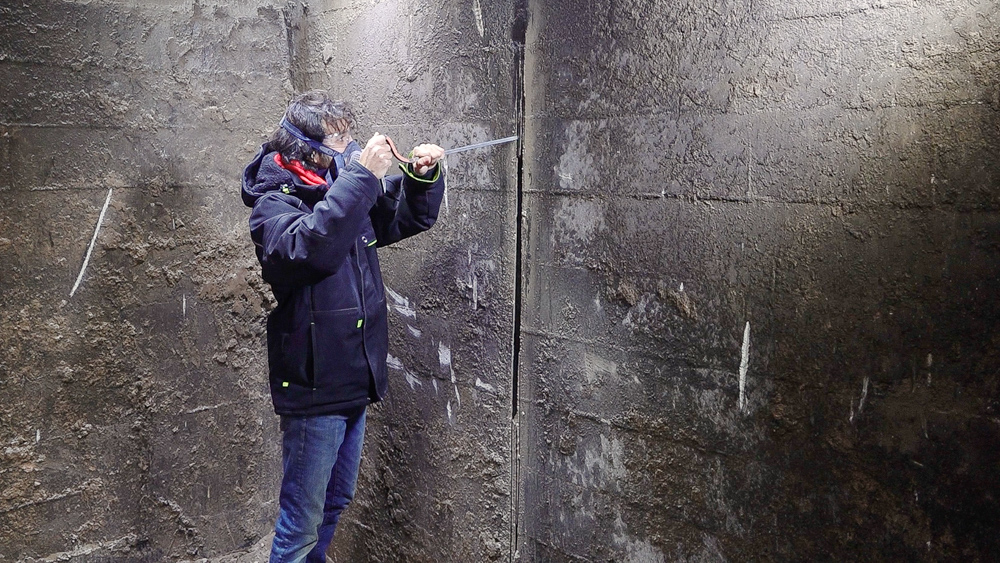 Now this saw has a twin blade. You go in to the depth, and then there is a bar that you use to snap out the core filling. You snap out about an inch at a time and work your way through it. 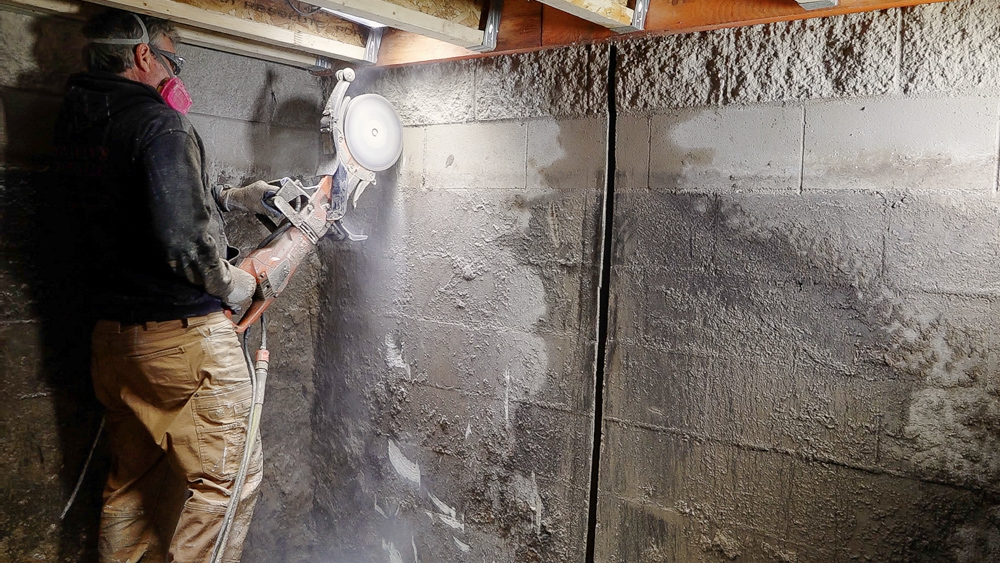 We’ve made it through! 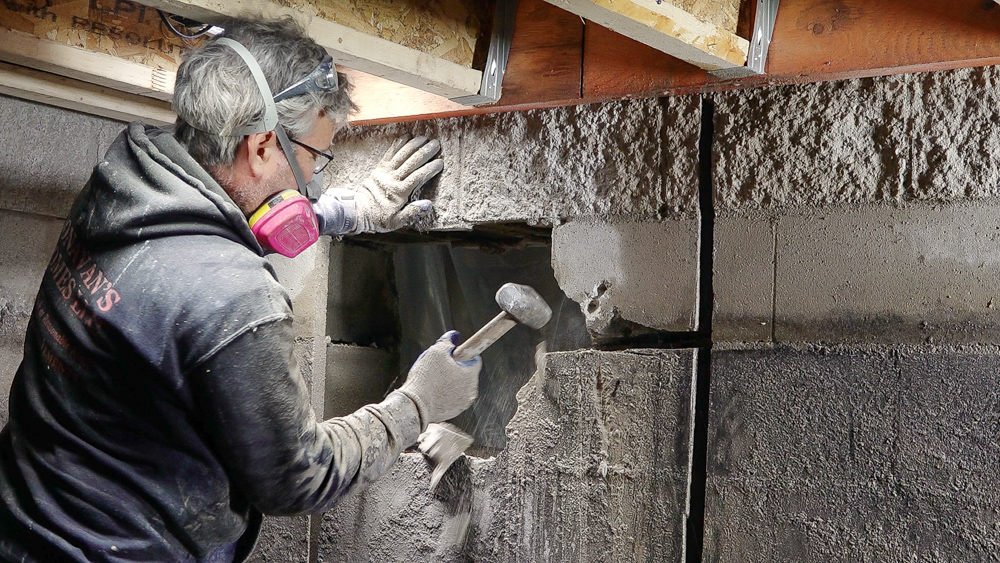 Next we have to knock out the wall between our two cuts.

Because of how things are laid out, Donavan’s going to try to remove this duct and get it out of the way so we can knock the wall into the hole instead of trying to knock it and catch it and pull it back into the hole. 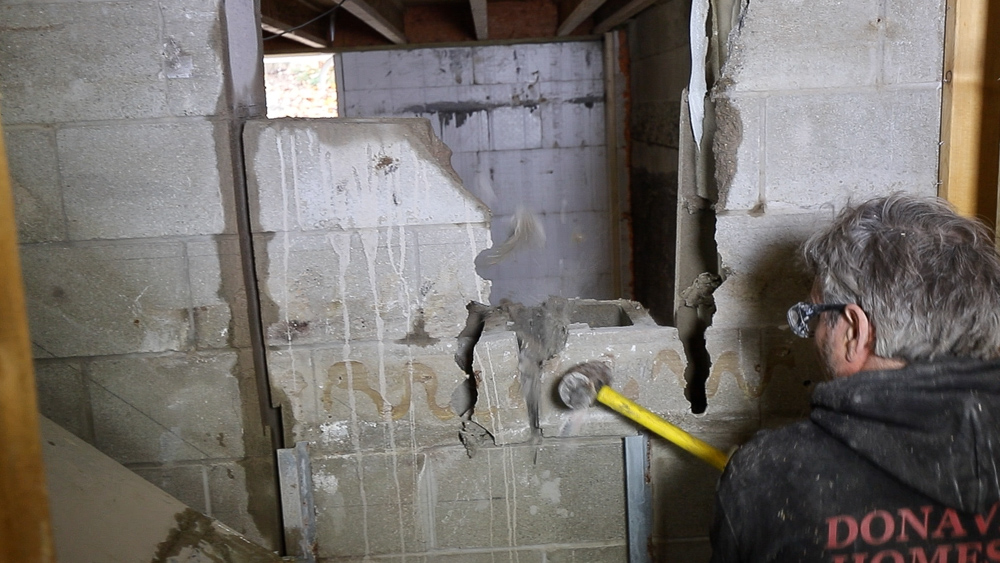 With that out of the way, we can take a sledgehammer to the wall now. Much more efficient. 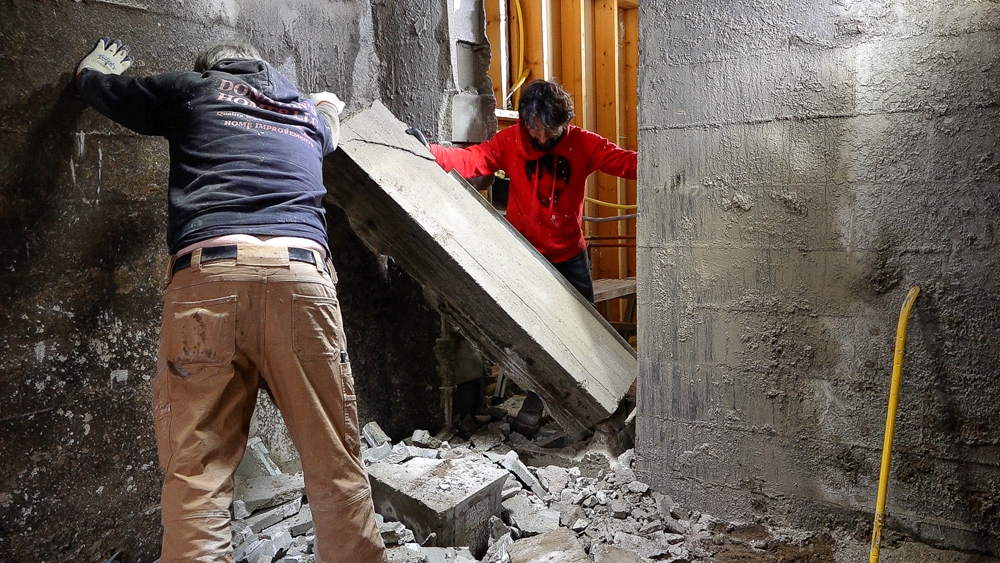 Getting the core-filled column out took some considerable effort, but luckily the other column was hollow. 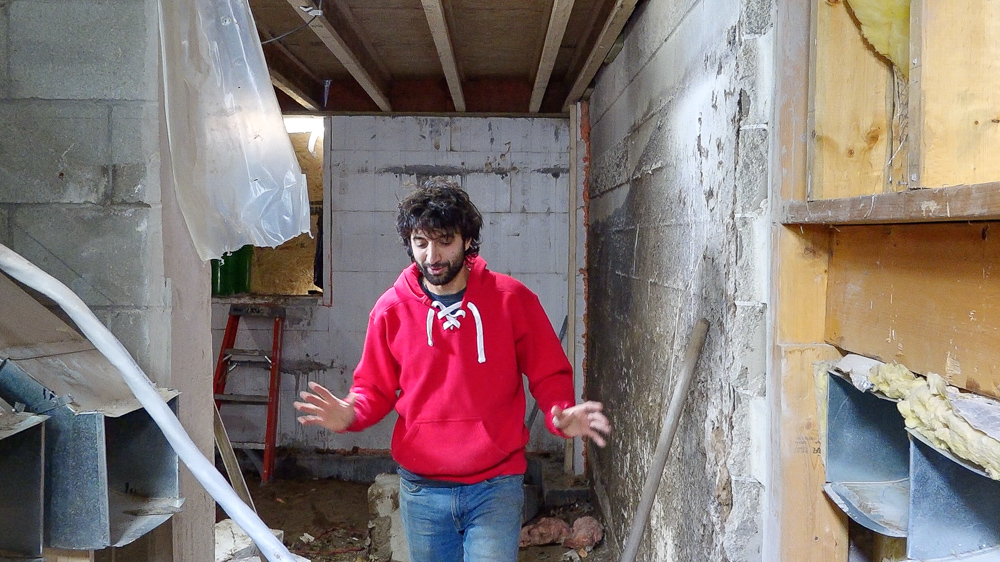 So check it out! Now we have actual access into our new basement and office space. Having a hallway here is weird because it’s all coming together now. We’re starting to get a feeling for what the space is actually going to be like, which is super exciting.

It was a very interesting and much longer day than we had hoped for, but I had some fun. Donavan… I don’t know if he had as much fun. He had a smile towards the end, so there was that.

That’s going to do it for this one. Thank you, as always, for joining me, I greatly appreciate it. If you have any questions or comments on the home renovation/remodel, please feel free to leave me a comment. As always, I’d be happy to answer any questions you might have. Until next time, happy concrete sawing.