Getting the warehouse ready for slabs

Today I am heading over to the warehouse to shuffle some things around and organize the place. As I have been moving, I have been dropping things off at the warehouse and not putting them away nicely, so I need to get back my flex space, which is the big open area that I work in and sort things in. I haven’t shown my warehouse in awhile, so I figured as long as I am going over there to organize, I might as well bring you along. 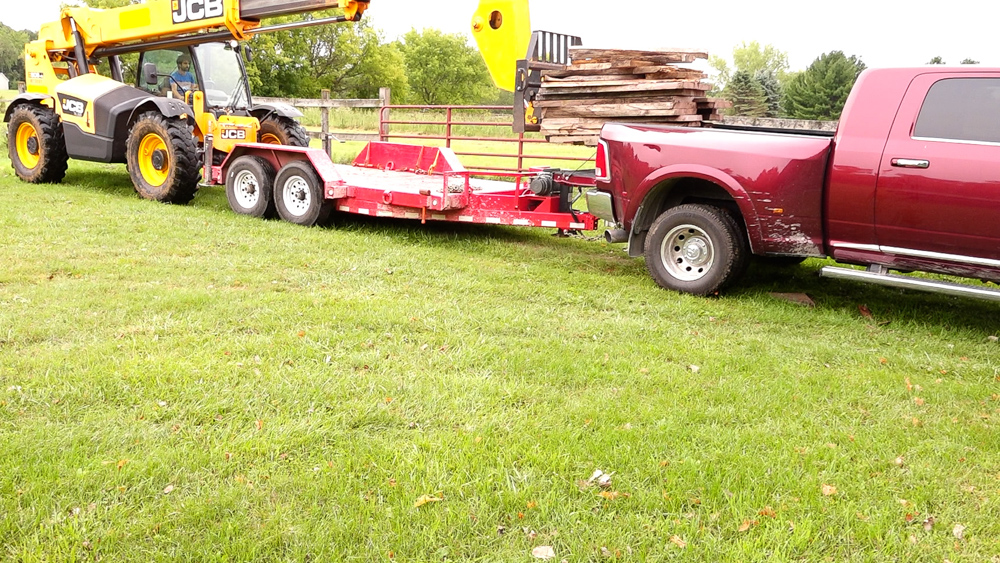 Normally for slab sales, I pick out the slabs that are sold and take them for final drying, but right now I have been taking any stack that has a slab sold and drying the whole stack to avoid putting things away. Basically I’m getting out of putting things away by moving them somewhere else. There’s a load here at the house that I picked up last week that’s dried which I have to move back to the warehouse, plus two other loads, and then there is a stack at the warehouse that is being dried right now. So today I have to pull out the slabs that are sold, palletize them, and ship them, which means I need my space back. First I need to grab the stacks here at the house and load them on the trailer. 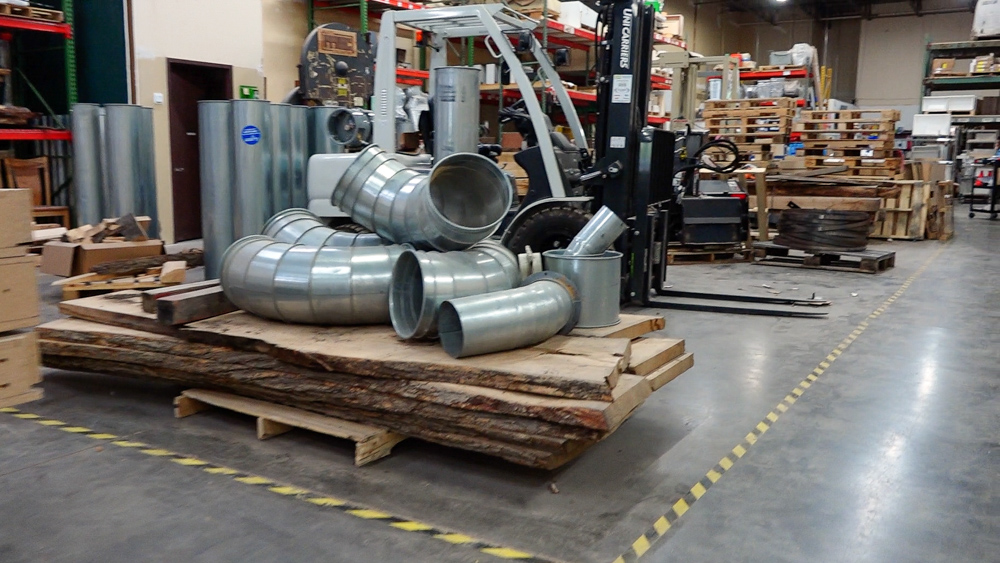 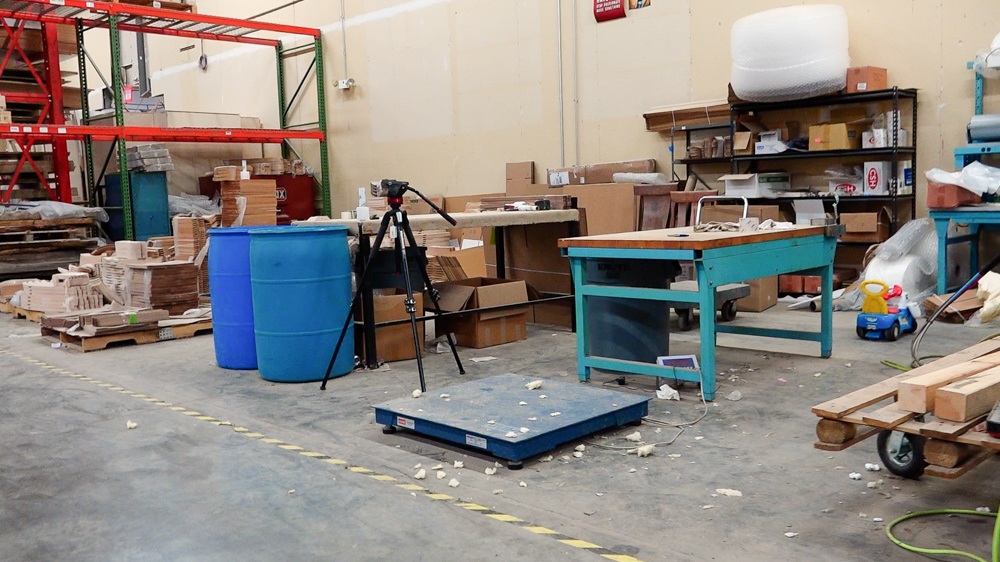 This is my disaster of a warehouse, which I’ve had for just over a year now. I have 2,400 square feet. Roughly a third of that area is dedicated to chair kits, including an inventory and a packing area. I do have to pick up some chair kits, but my main priority for today is to clear up this mess and get it a little more organized so I can work on shipping things out. 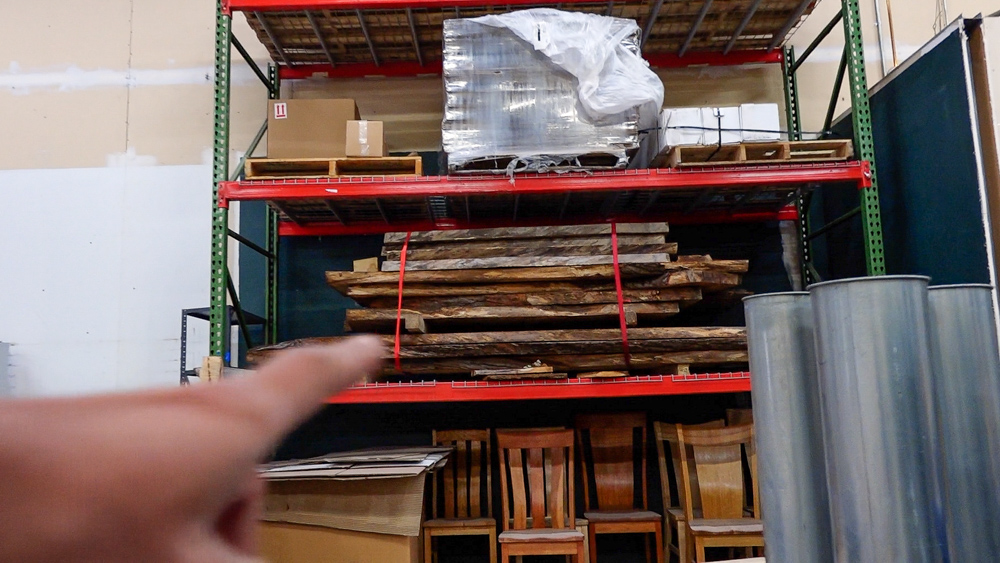 I need to get these slabs out of here because they’re getting picked up this weekend, as well as a workbench kit.

I do have another workbench kit, which I said I wasn’t going to surface anymore, but I’m crazy and like punishing myself, so these are going to come back as well. They’re going to get surfaced so they can go out too. 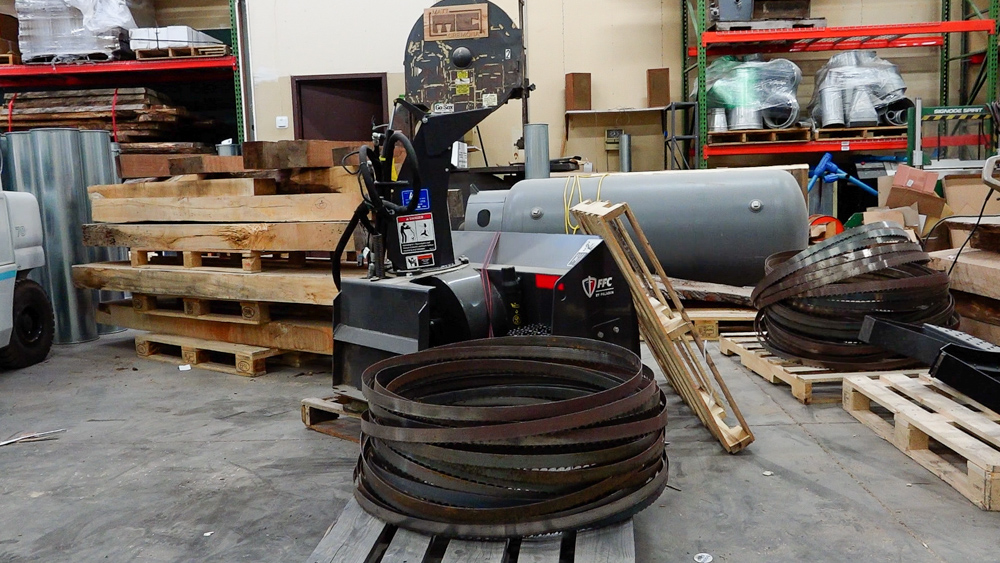 I’ve got a lot of things to move, like the giant air tank. As you can probably tell, this area becomes the dumping area. If I have something that needs to come to the warehouse, I just set it over here and leave so I’m not here super long. Now I’m paying for that. So I’m going to start moving some stuff around, cleaning up, and making space for the stuff from the trailer. After that, I have to load the stuff that’s leaving here onto the trailer. 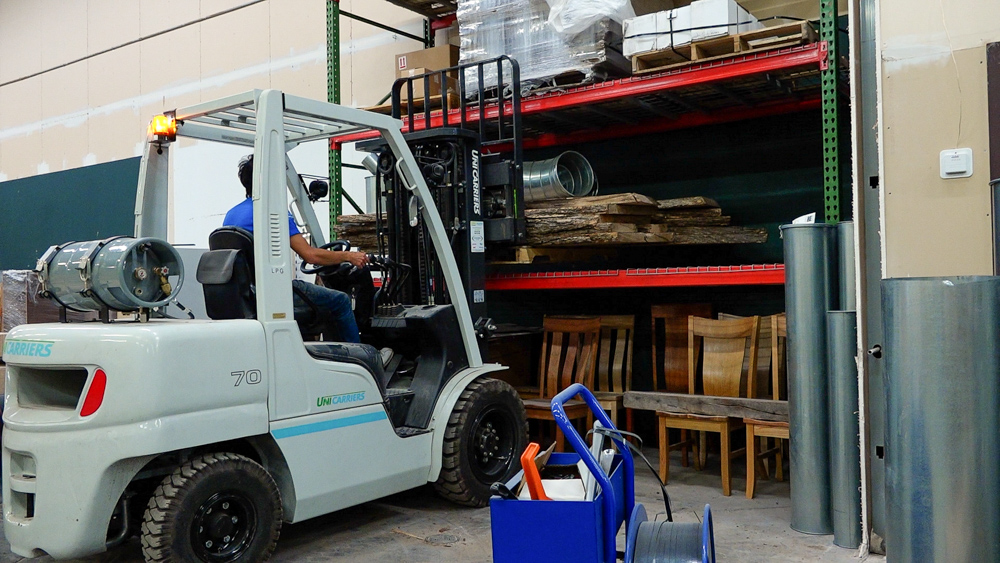 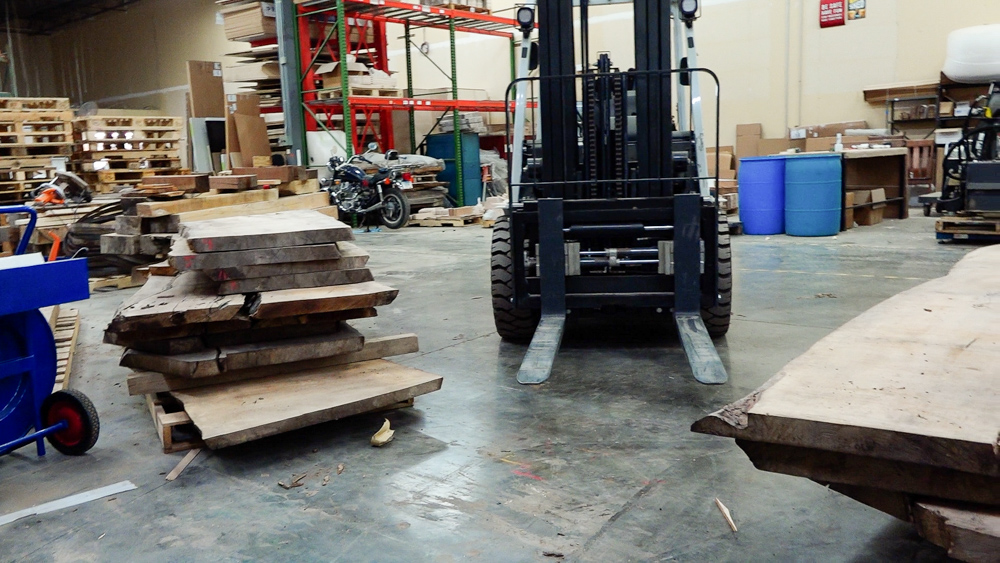 Now I’ve got a few things shuffled around a bit. After talking to the buyer of these items, he might want some of the things in the warehouse, so I’m planning to meet him here this weekend instead, which means I don’t have to come back here and go through more slabs. So I’m just going to set his stuff aside for now. This is working out pretty well. 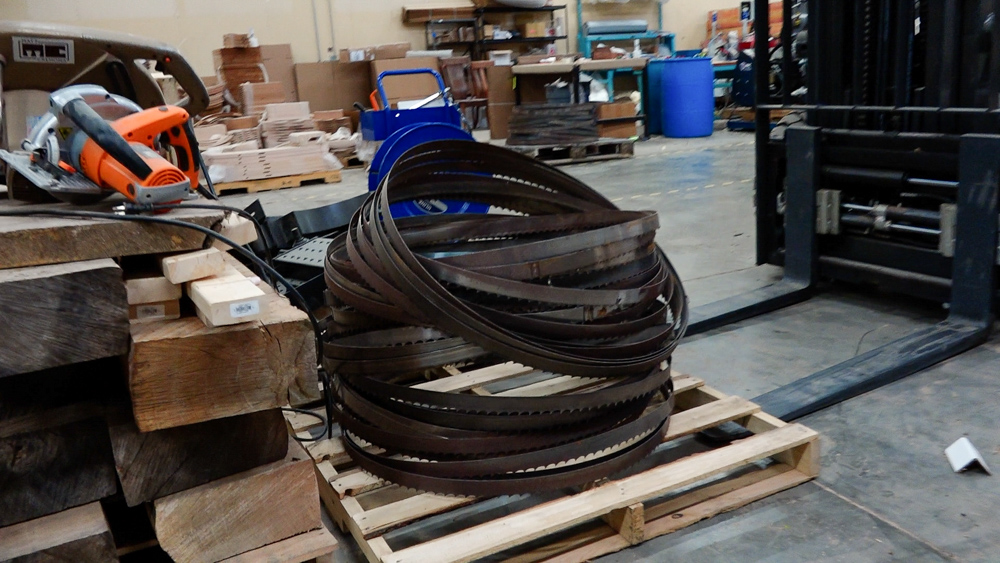 I’ve got one stack of old bandsaw plates that probably should go up on the shelves, but I’m not doing that today. 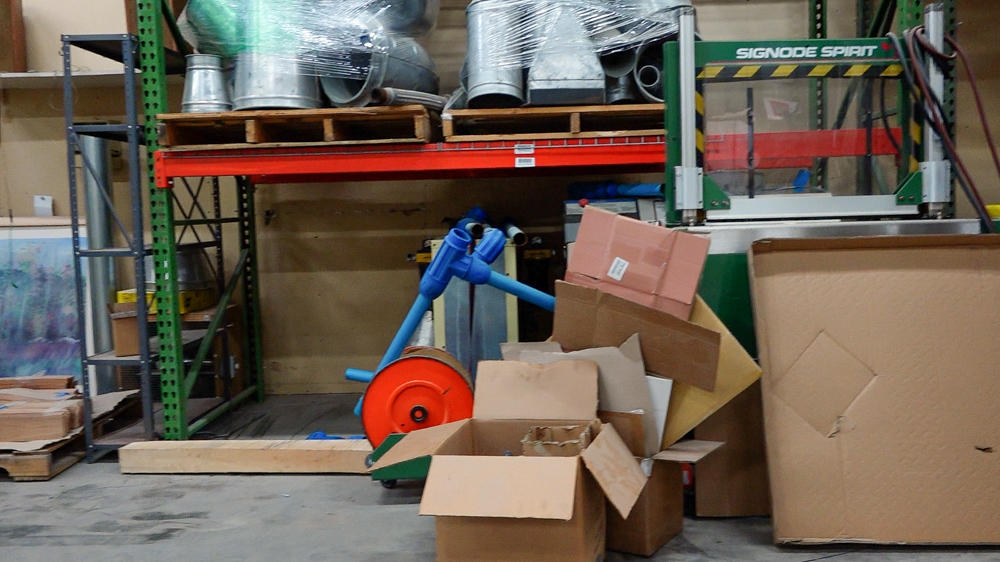 Turns out the only thing leaving the warehouse today is going to be the workbench kit, meaning I need to grab that pair of bench tops from behind the air tank. I can put the air tank by this rack, which would ideally be full of things that I don’t really need or use often. 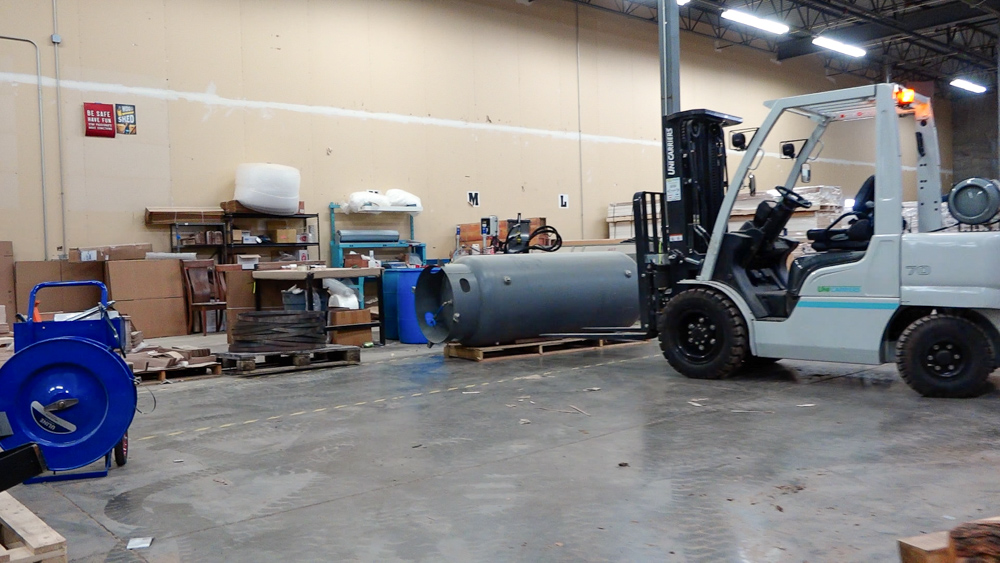 There’s a lot of room in here now after just a little bit of shuffling around. 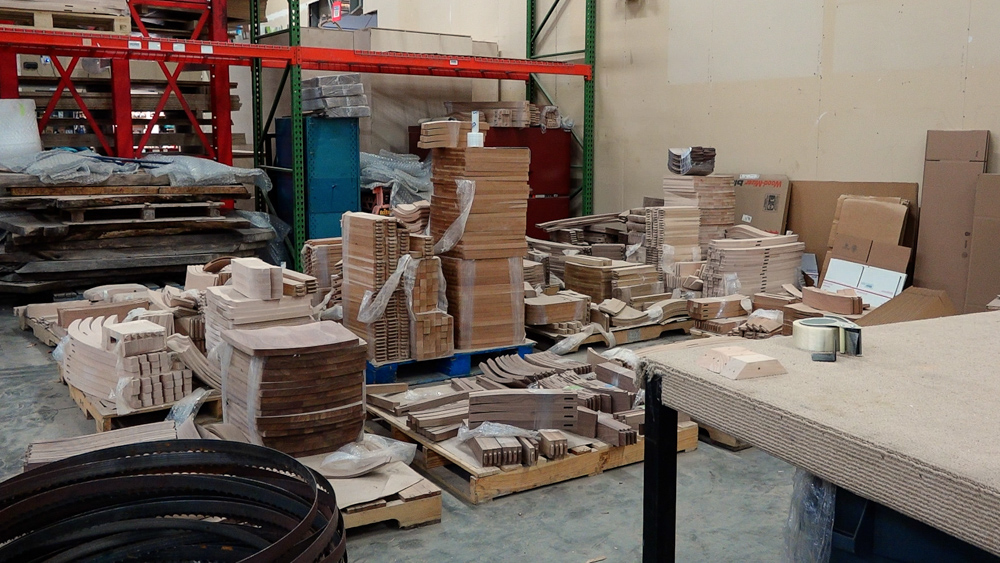 The last thing I will do here is get the chair kit order ready to go, which is getting picked up this weekend. I need to get six of the kits from way in the back. It’s been an interesting change from the last time I showed a lot of the behind-the-scenes from the chair kit stuff. Back then, everything was being shipped out as it came in, so I wasn’t inventorying anything. Now it is set up a little bit differently. I have one pallet for every style (or every SKU), with the exception of the most popular ones, which are cherry number threes and walnut number threes. Those are on two pallets because I used to have a lot of them. I put those up front because those are the most common ones and that made them easier to grab. As you work back further, those are the less common ones, based on what I sold during the pre-sale. I do mix things up by species because one of the other things that we learned doing all those initial orders was that a lot of these look the same. So if you can keep the species and the styles separate, there’s less chance for error. 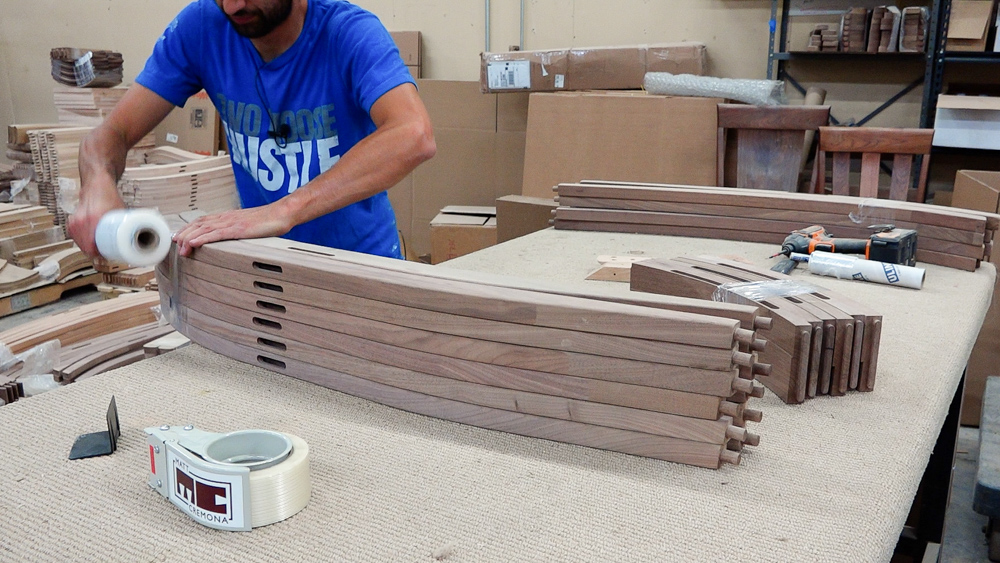 Right now I’m putting together a six pack of the high back style four. For that I need seats, the rear legs, crest rails, and the back slats. Then I need the hardware kit. 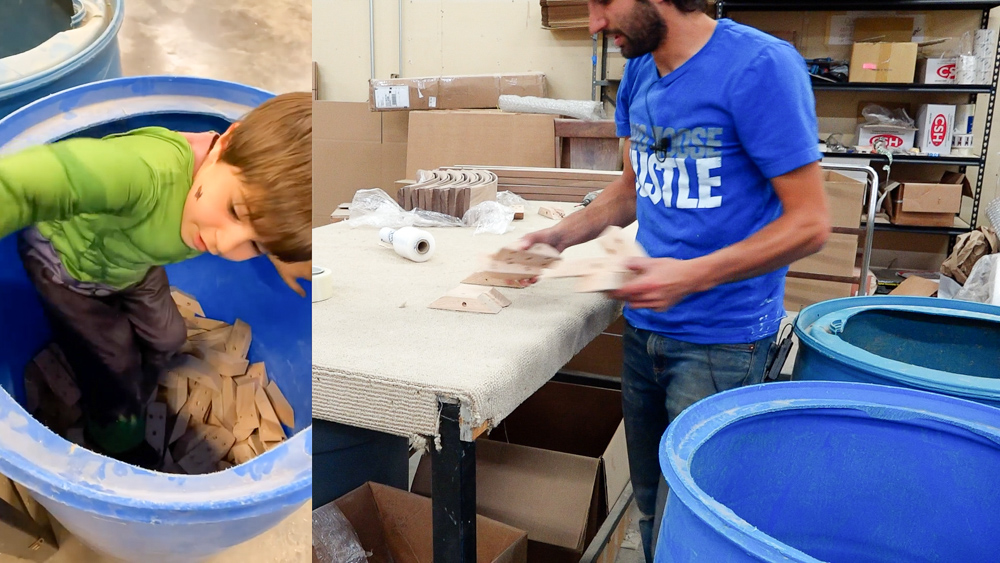 I have the two styles of corner blocks in two different barrels. I’m going to pull those out first and then get some screws ready. When I pack chair kits with my kids, this is their favorite part. Max will climb in the barrel and stack them for me. 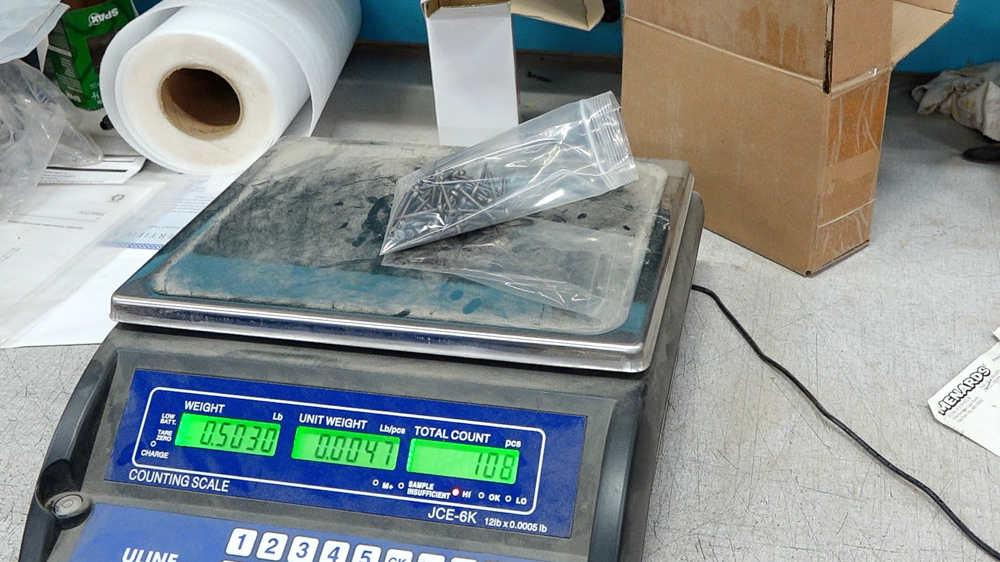 Screws are something that I normally have prepackaged, but I’m all out of six-pack kits, so I’m going to make a couple more six packs here. A six pack would be 108 of these screws, and I usually slip in our spares just in case. 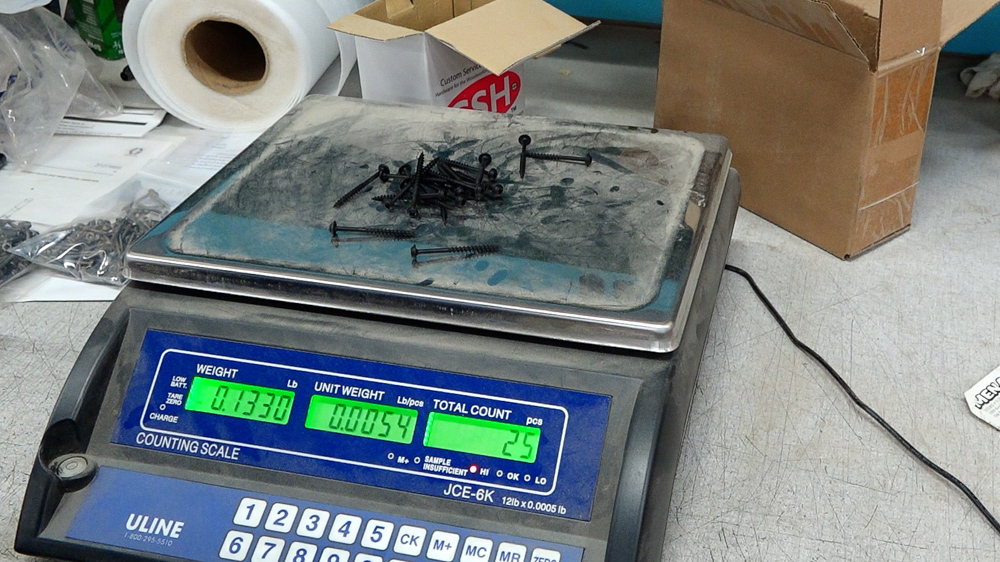 These are the screws that attach the seats to the corner blocks. Four of them per chair, six chairs, 24 of these in total, plus a couple extra. One of the questions that I got a lot when I launched the chair kits was if they were imported or if they’re made in the U.S. Everything is made in the U.S. except for these screws, because I can’t find a supplier of this style of screw that’s made in the U.S. So these are Taiwanese screws. Everything else, all the wood is U.S. made and manufactured from U.S. trees. 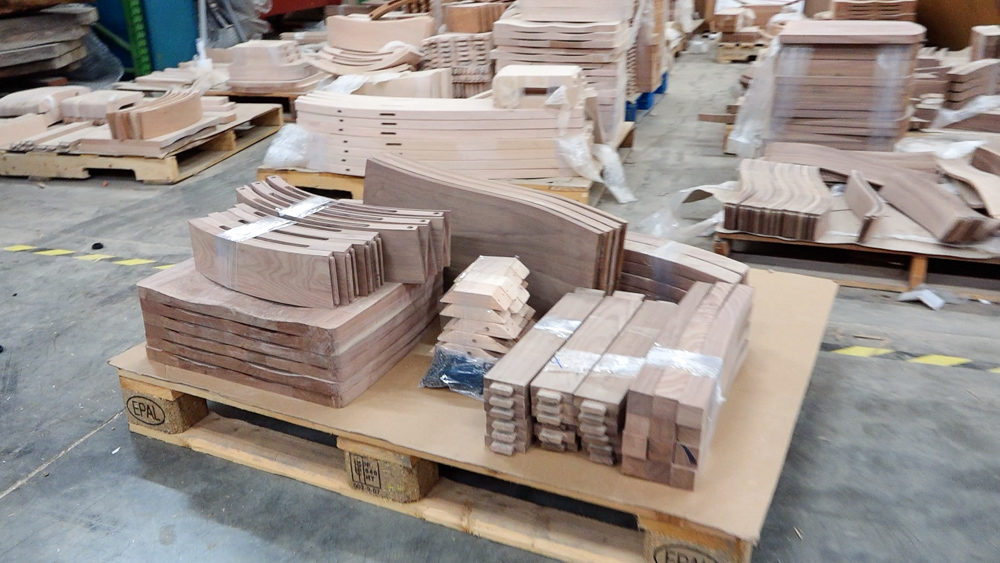 These are ready to go; a nice six pack of number four walnuts. 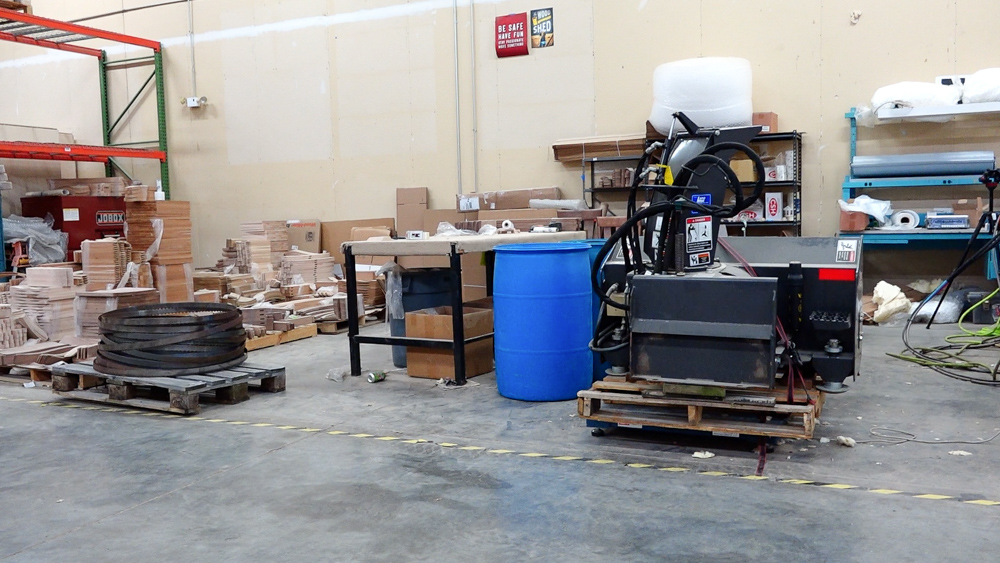 As far as this chair kit packing area goes, it’s definitely not the most efficient, and it needs a lot of tweaks. As I have been working here for a year doing this now, I’ve had a good time trying to figure things out. At this point, I’m not doing enough volume for it to really make a difference for me to come in here and totally move things around. 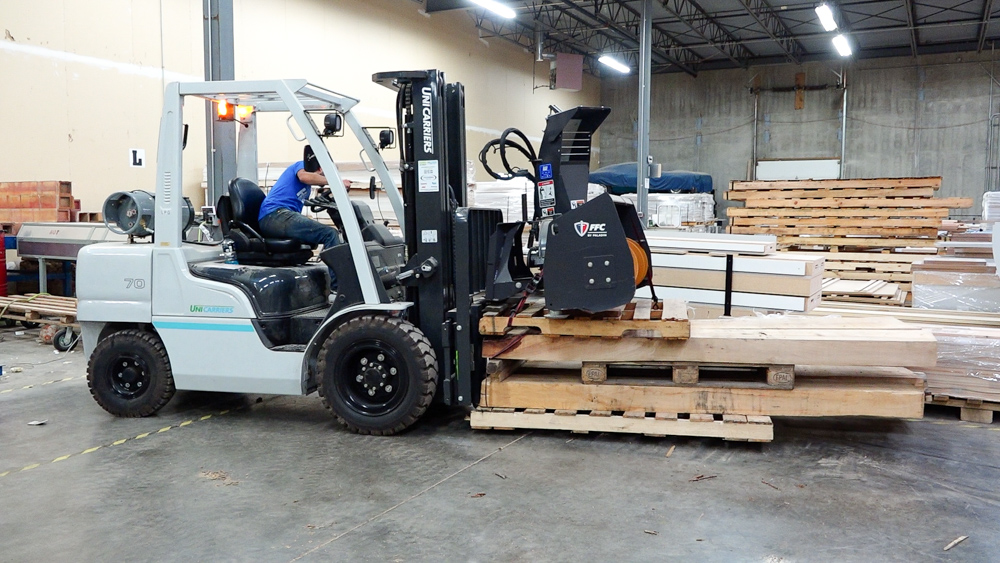 I’m going to get these workbench tops out of here. I’m definitely going to need my counterweight for this, and I can just end pick this whole thing and go set it on the trailer. 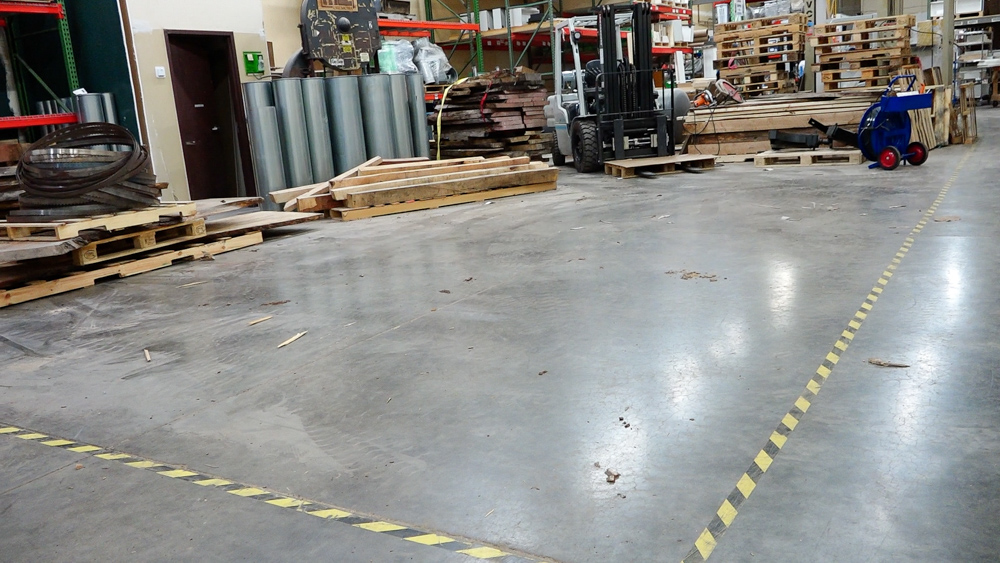 So decent progress, still quite a bit more to do. But that gives me all this room back again to bring in more materials, sort them, and ship them out. A lot more space. 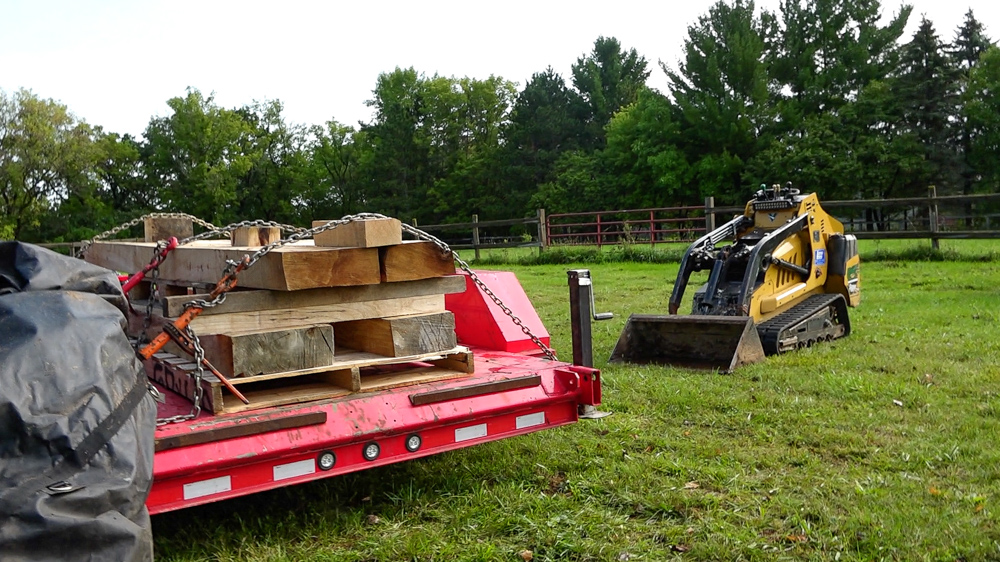 These made it back just fine. It’s now a couple days later, and I’m getting ready for all my pickups today. I have to get the base material ready, which involves slicing up some smaller pieces into four by sixes, which I’ll do in a little bit. 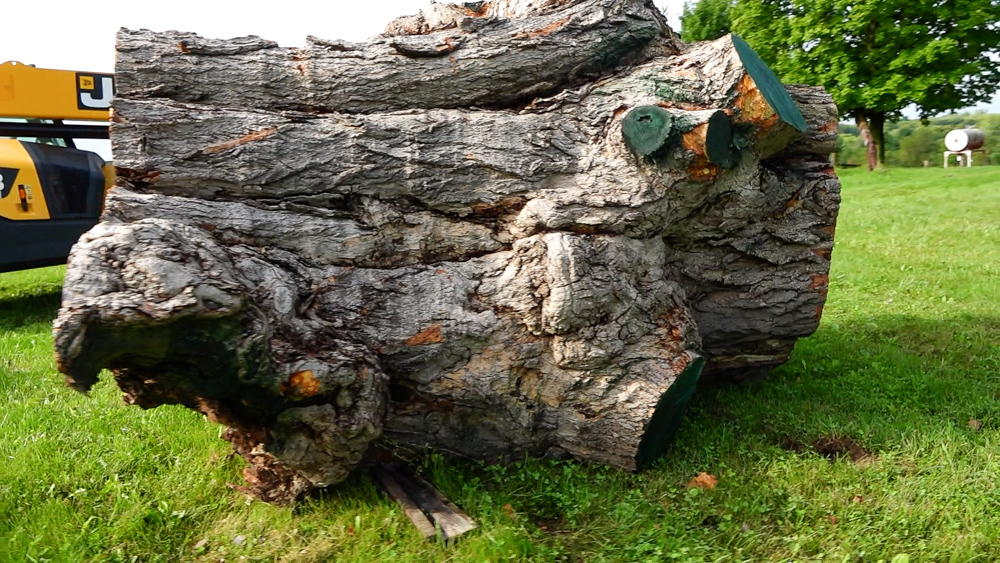 Some of you probably were wondering about this. This is a section of what is probably (or should be) the biggest sugar maple in New York state. This is from Eric Duke. He reached out to me on Instagram about a month ago. 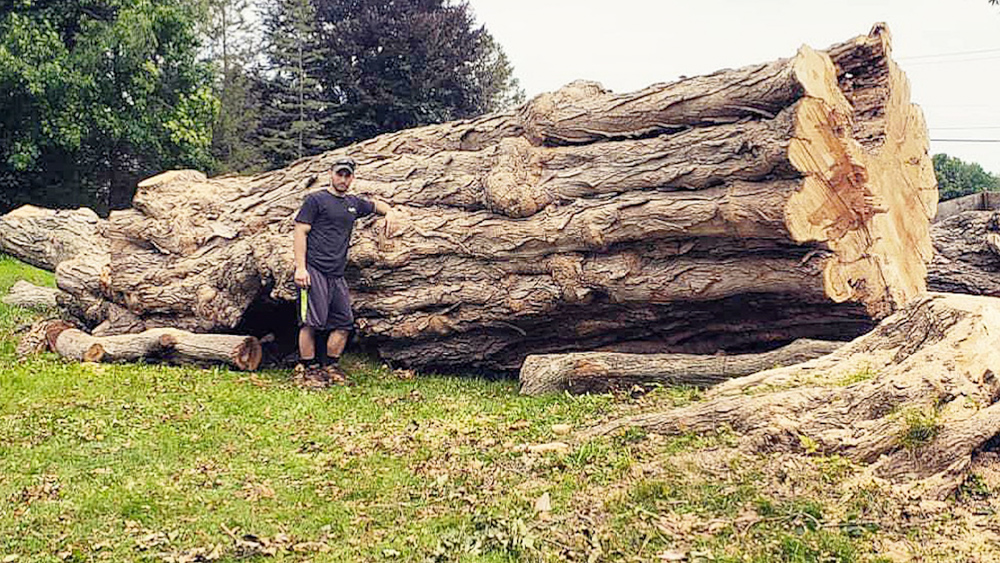 He salvaged a seven foot diameter sugar maple and was looking for some help to get it moved and sawn. He got it craned out of the yard that it was in, put it on a flat-bed, and it’s sitting in his log yard now. It weighs 32,000 pounds. 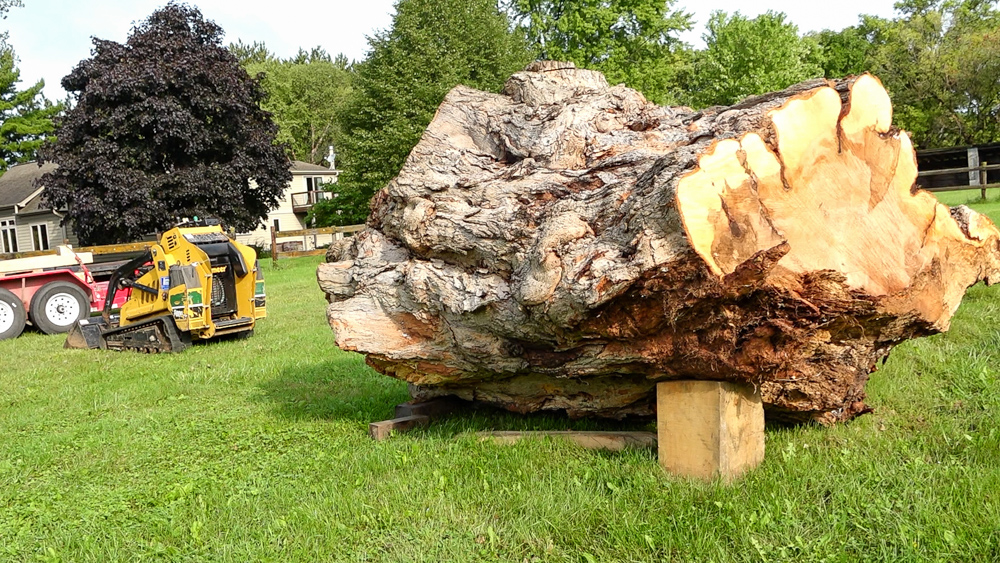 This section here is from the upper part of that tree, meaning it was 20-something feet in the air.  We’re going to be cutting this up next week. Coincidentally, Eric is heading out to a camping trip right now in North Dakota, and my house is on the way; I’m right off the freeway. So he dropped off the log, and he dropped off his trailer. When he comes back through on his way home, we’re going to cut this thing up and see what’s inside of it, which should be pretty cool. We have the biggest cherry tree in Iowa, and then we also have the biggest, or a part of the biggest, sugar maple in New York.

So this was a day of the behind-the-scenes stuff, which I don’t normally show. It’s a lot of driving around and moving stuff around!