Today, we start the last phase of the move. We are moving the saw mill and everything that is a part of that. So mostly slabs, lots and lots of slabs. Today I am going to get started on some prep work, taking my forklift to the new house, and getting things staged today. Then sometime next week I should start moving. So let’s head over to the warehouse and grab my forklift. 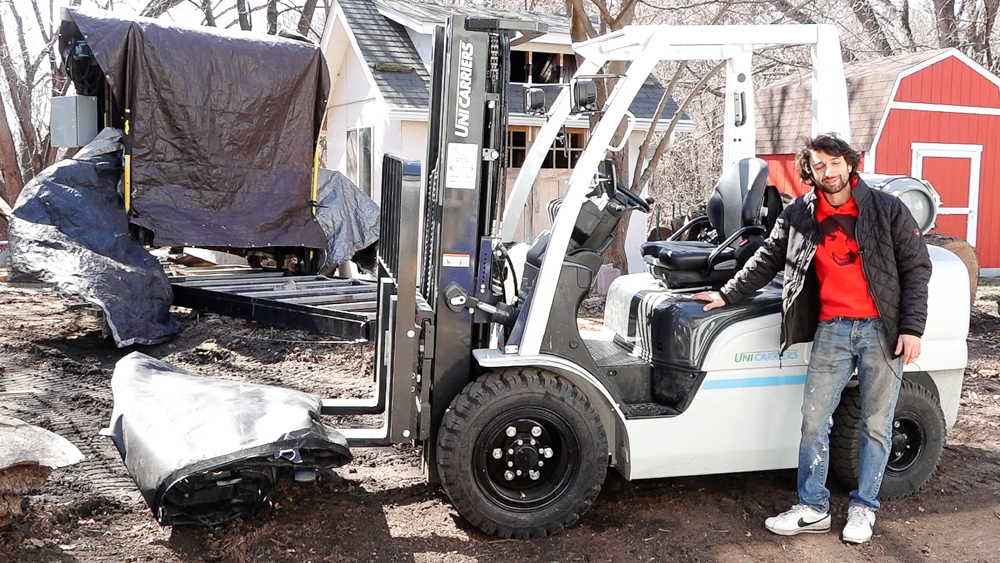 My forklift has arrived. Not a whole lot going on today in terms of the move. The plan for today was just to get the forklift here and get that checked off the list so things are ready to go. I have a couple of logs here that I’m going to haul back today. I may also start banding things to get that out of the way as well while I’m here today. Then next week, we’ll be back and doing some actual moving. Should be interesting. 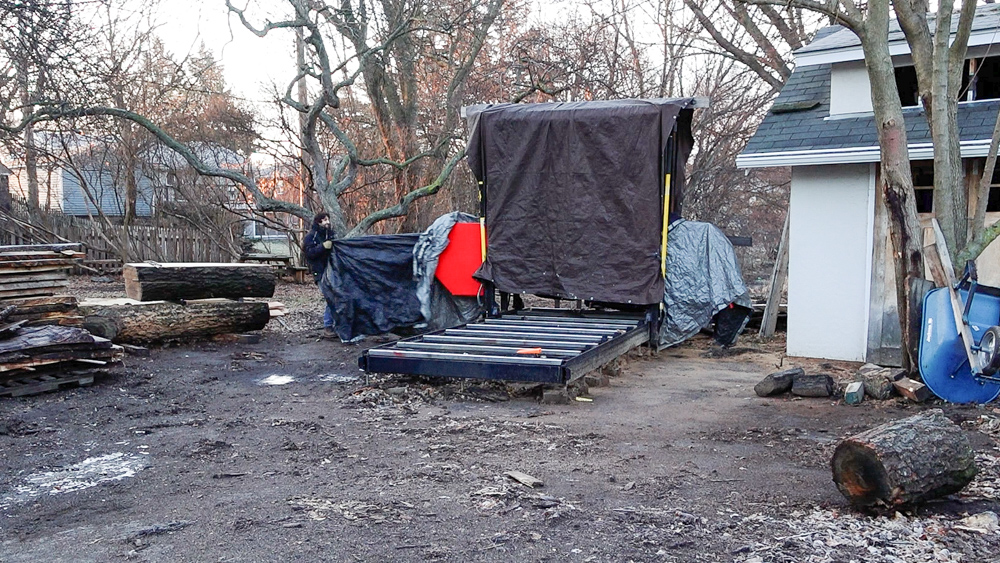 Good morning! It’s a little after 7:00 AM, and the sun is coming up. It is below freezing, but I don’t think it got cold enough for a long enough time last night to fully freeze the ground. We also had heavy rain yesterday, so I don’t know that I’ll be able to move the slabs today. At the very least, let’s see about getting the saw mill out of here. 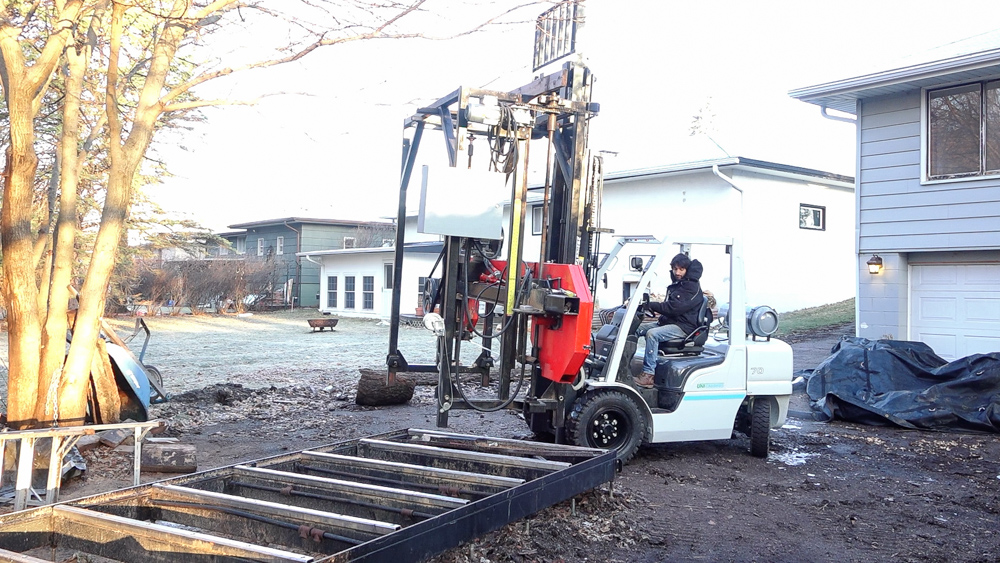 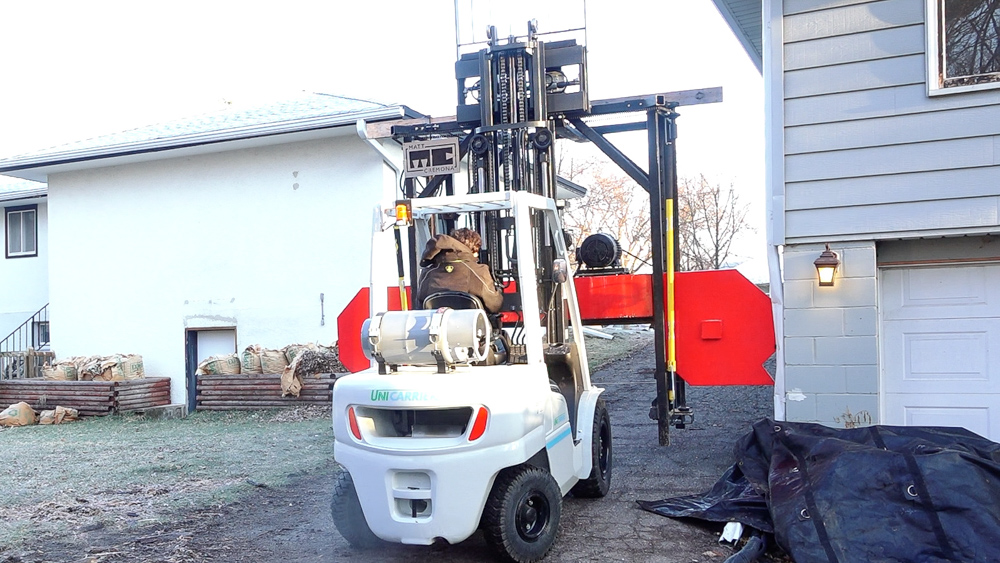 All right, how about a little lift off? This would be a lot easier if the ground was flat. There’s like a twist in the ground here. Oh man, hit the downspout. Too busy paying attention to what’s going on up top so I hit the house. 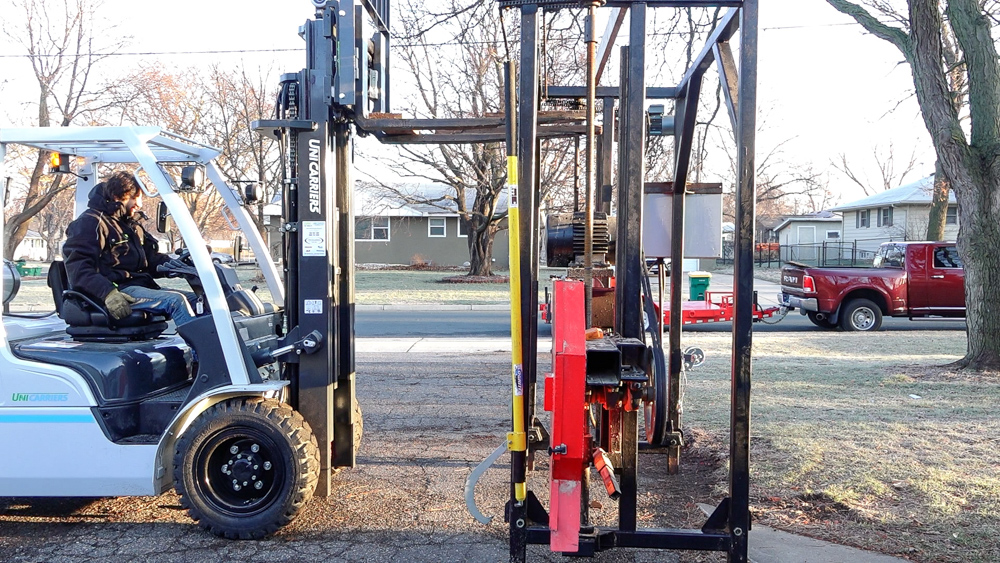 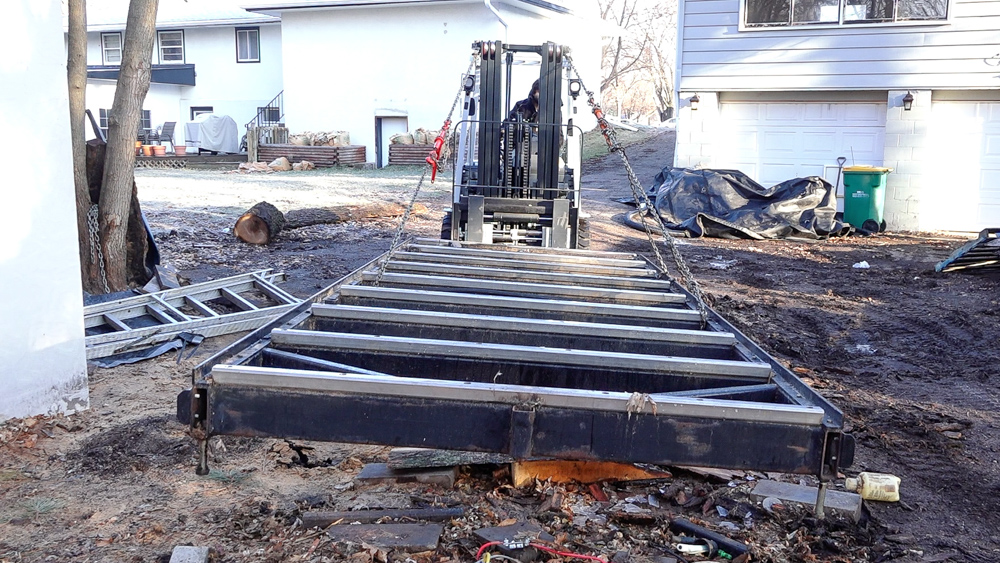 And away we go! This is so ridiculous. 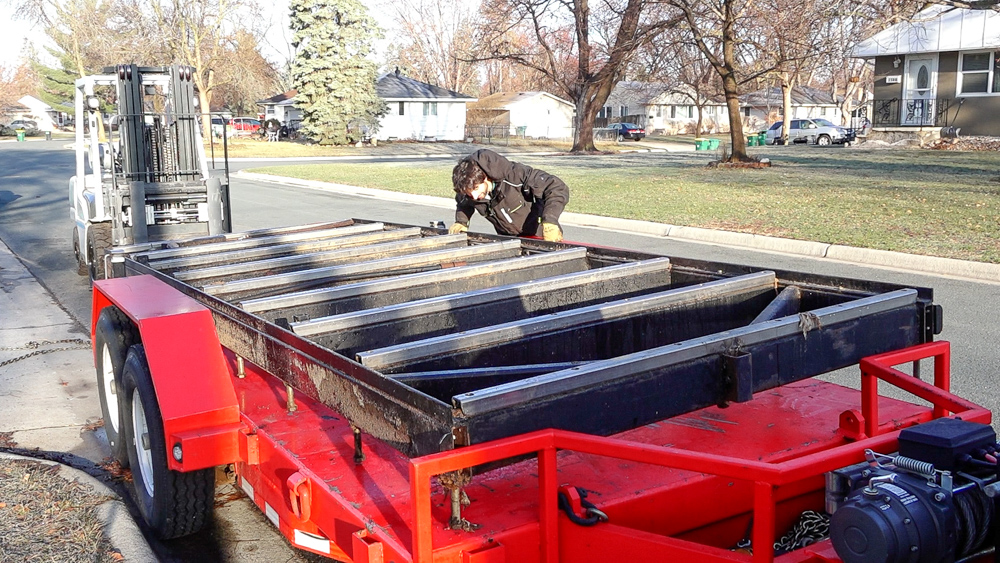 Somehow I got it just perfectly sitting on top of the D-rings on the deck. Well, we can, we can fix that later. 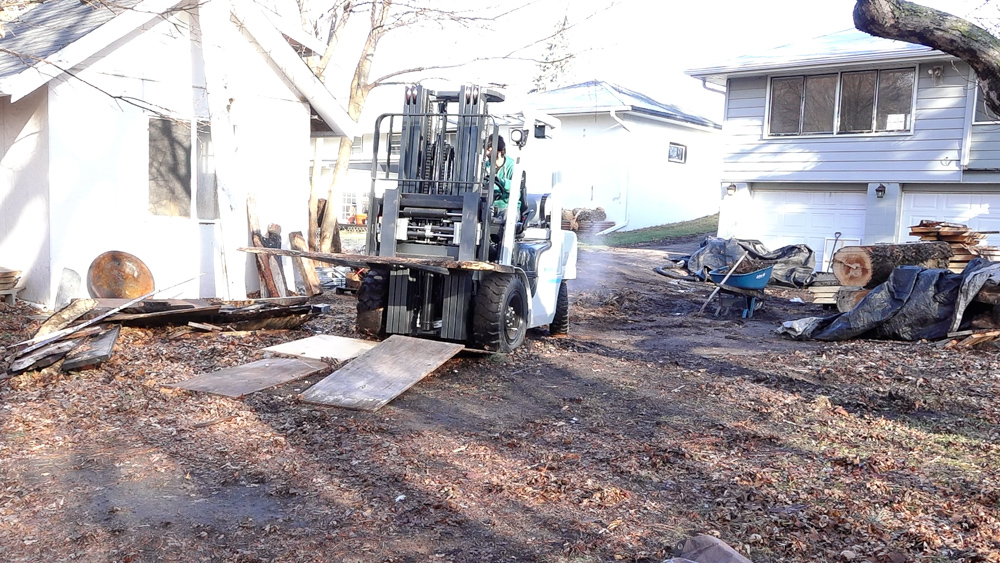 Before it starts getting too warm, let’s see if we can get some of the slabs out of the backyard. Let’s see how the ground feels, because it’s warming up quickly. The front tires look fine, but I’m more worried about those tiny little back ones. Already stuck. 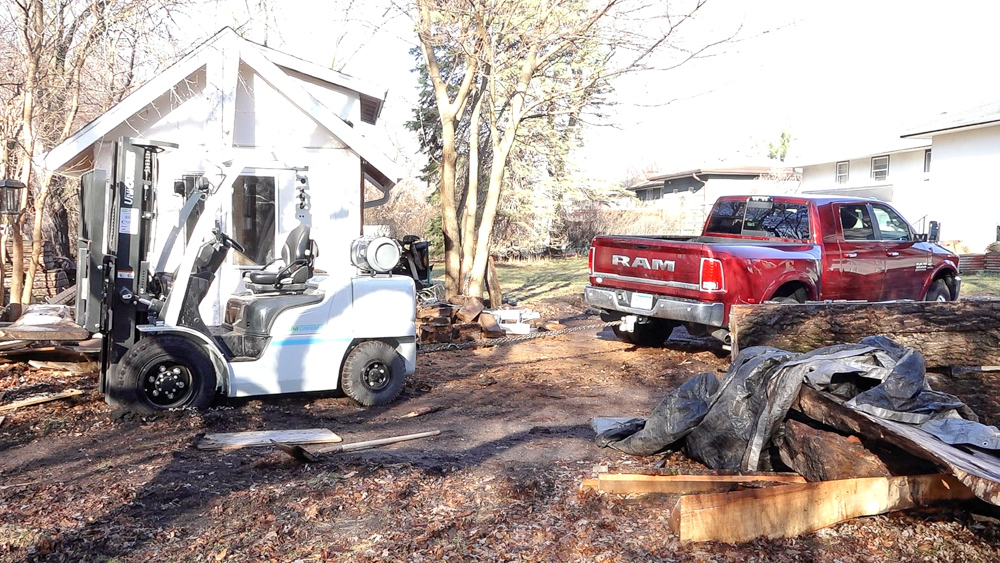 At this point, we’re just going to try and get the forklift out of here. The ground is too soft to move any slabs with the forklift today. 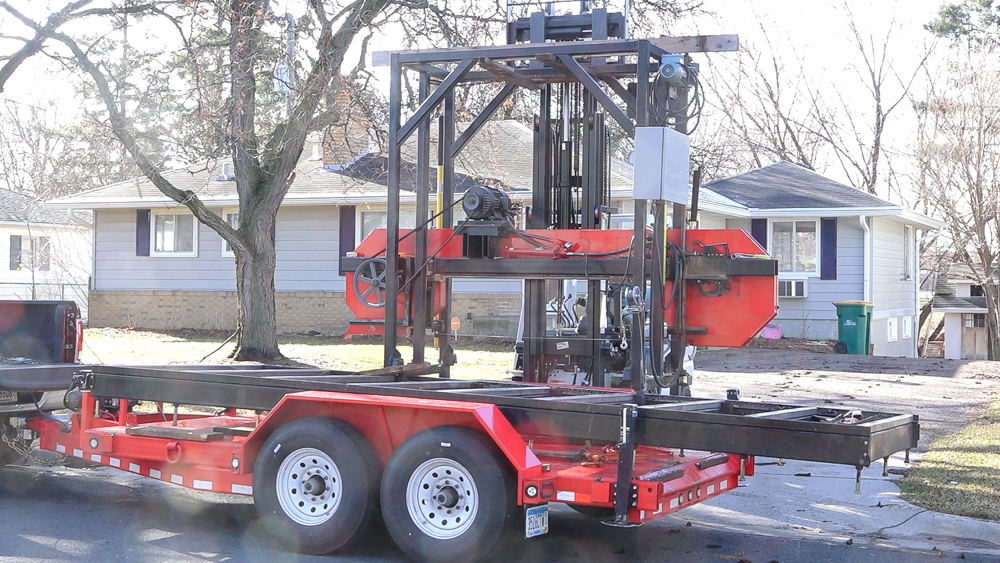 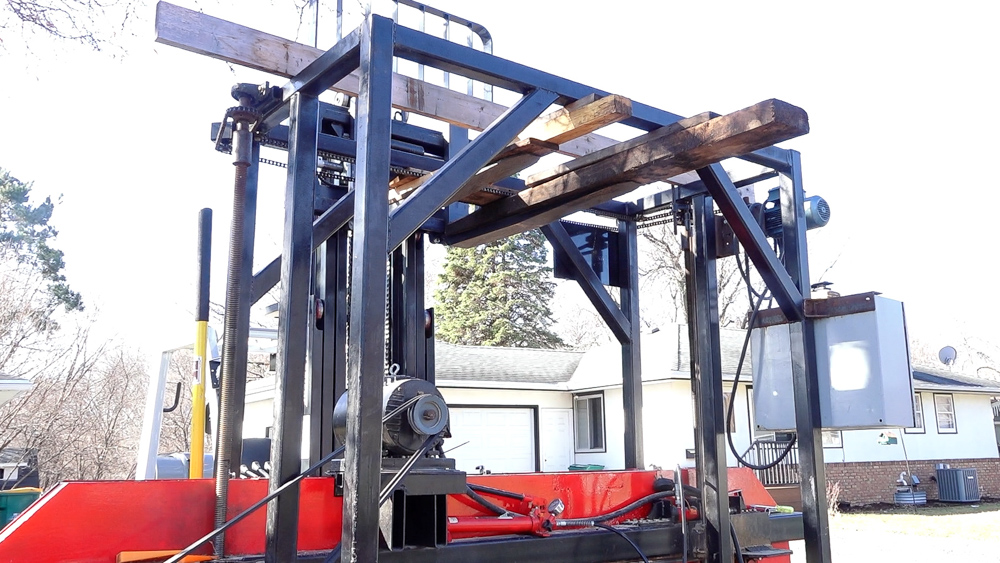 Turns out I don’t have enough reach to actually go over the fenders. So to give myself a little more reach with the forks, I made a quick set of fork extensions with some pieces of wood. It feels stable. It’s definitely more bouncy than it was before, but it’s not like it’s going to go anywhere. I just have to go even slower and throw a chain up there just in case something happens. Then it should be good to go onto the trailer. 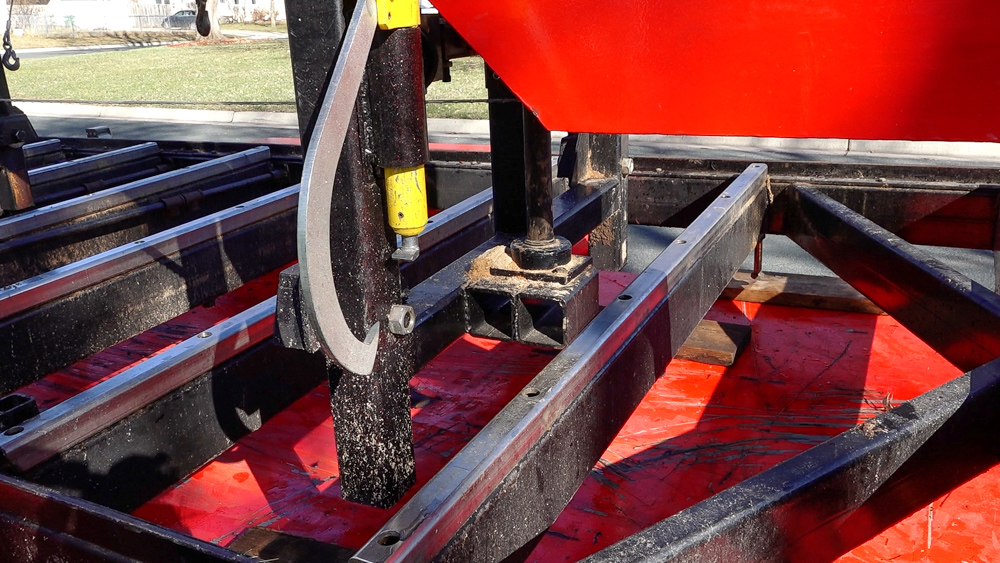 Something else I didn’t plan for. Now the problem is that I’m a little too wide to sneak down between the bunks because of the support. I’m flush on the other side, this one’s in the way. 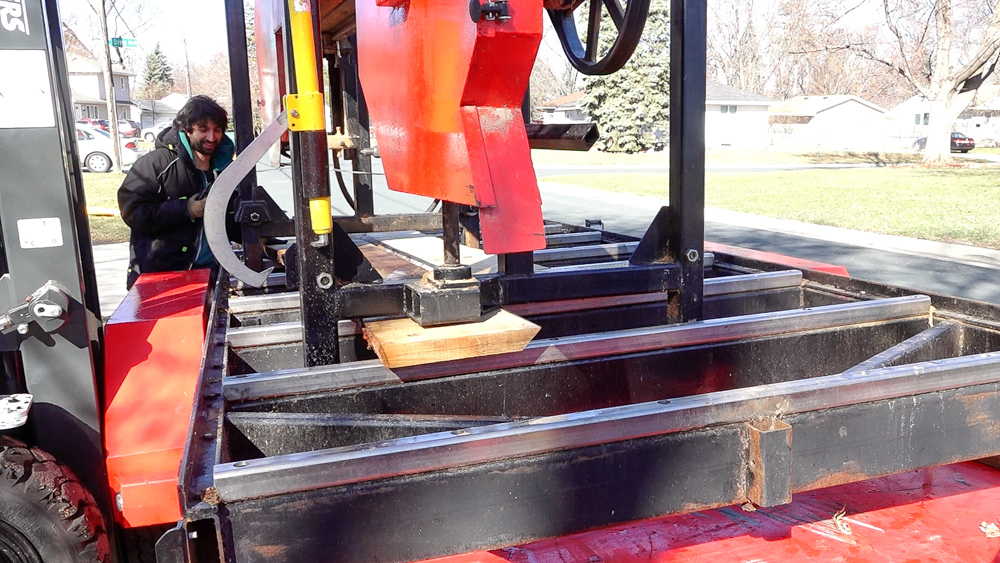 Okay, new plan. We’ll just drop it on some boards. 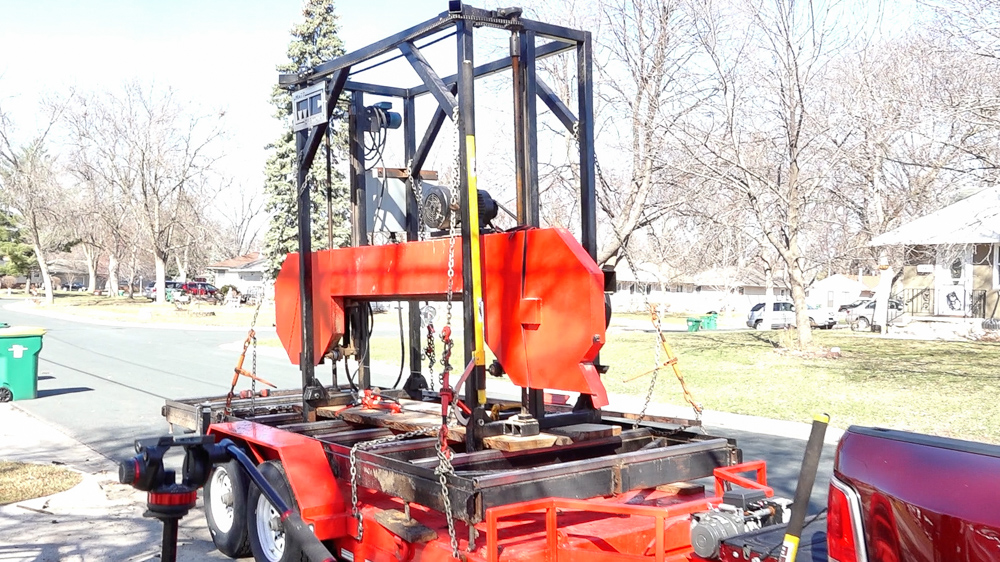 And that’s it. Time to hit the road! 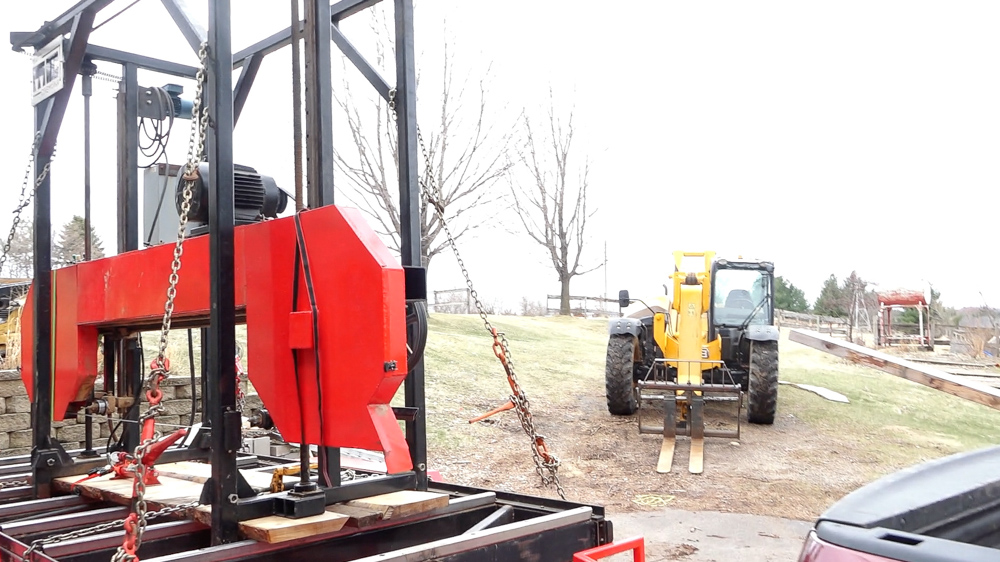 A pretty uneventful drive back. Now let’s get it unloaded with that thing back there. I just bought this 9,000 pound telehandler, and it showed up today. This is a 2014 model, which was previously a rental unit, and it has about 5,000 hours on it. It should be a lot easier to get the sawmill off of the trailer with this telehandler because now I have a boom, so I can actually reach out and grab it. The forks on the telehandler are five foot forks, versus the four foot forks on my forklift, so it should be much easier to pick the sawmill right up off of here. 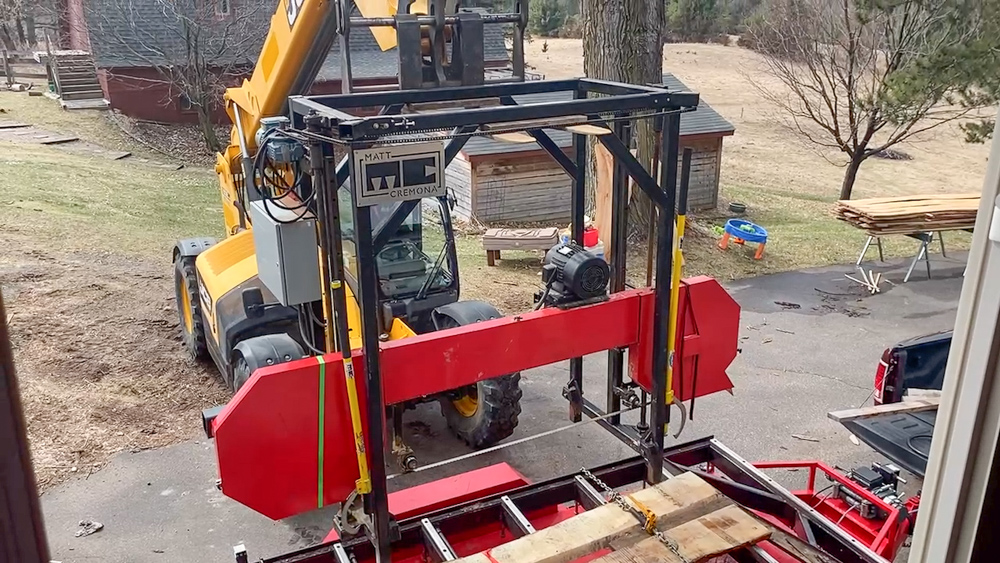 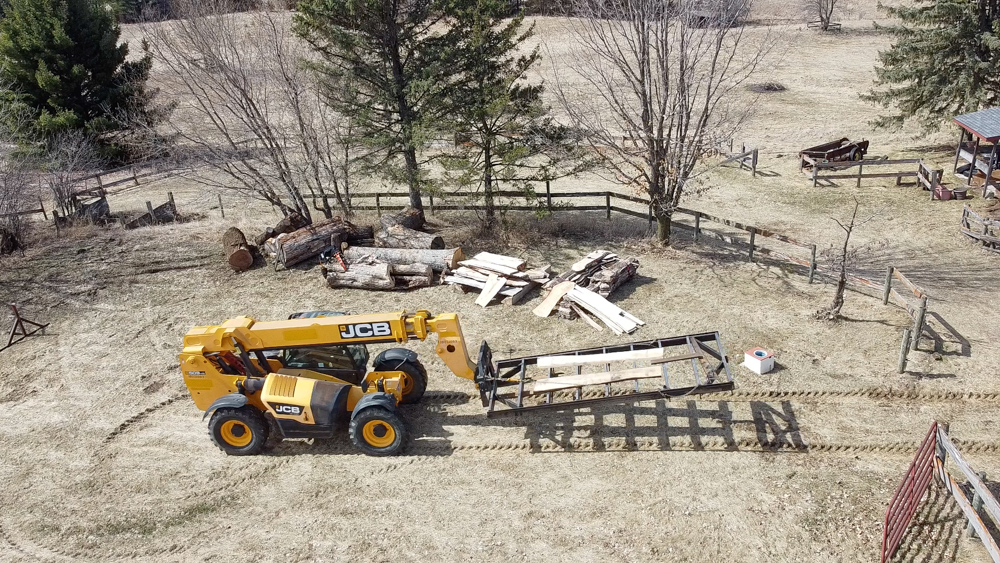 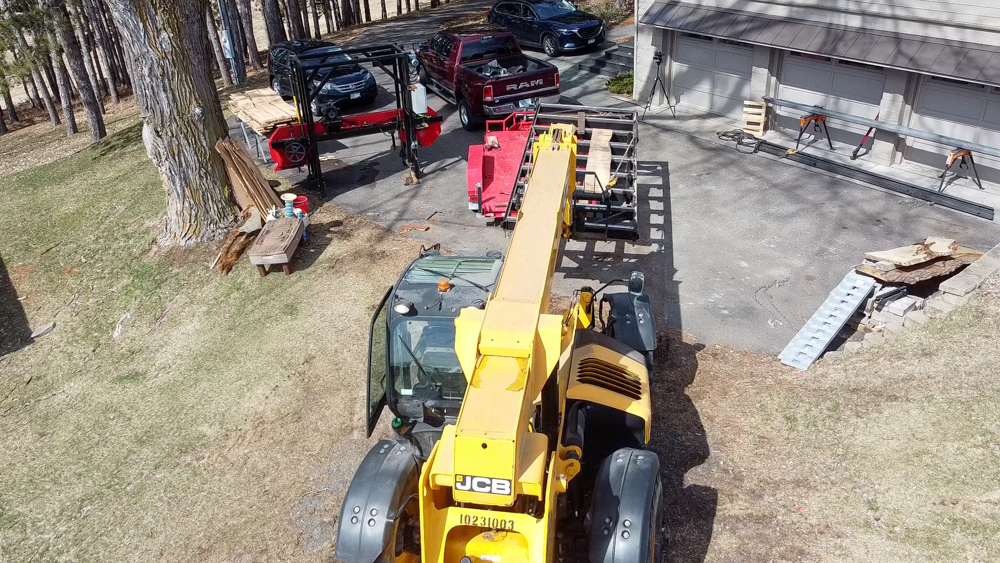 And that completes the 35-mile journey to its new home! I don’t have an actual permanent place for this right now. 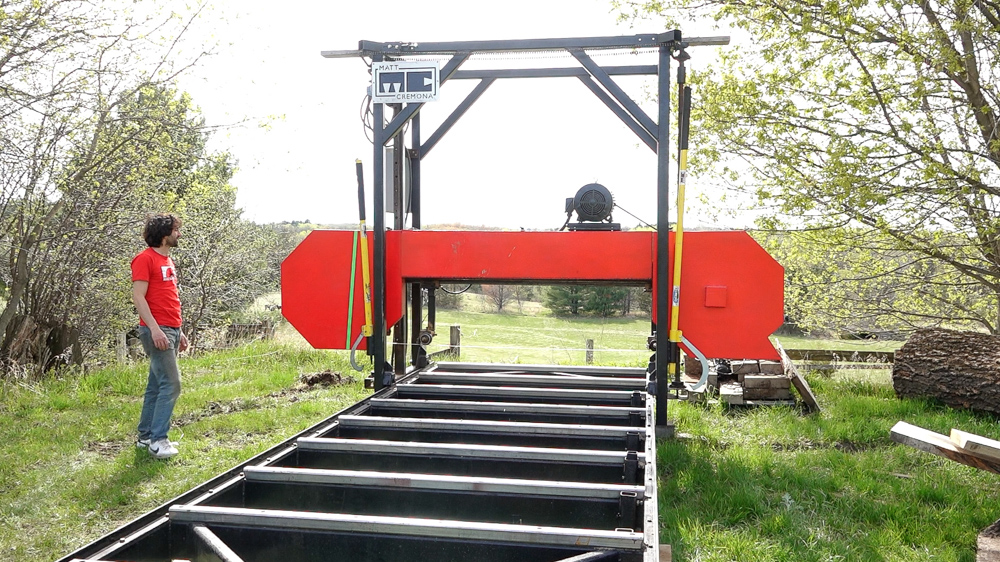 This seems like a decent place to put it as it needs somewhere to sit for now. Overall, a relatively uneventful move for this thing. It’s nice to have that checked off the list.

Next time we are going to pull every stack of slabs out of my backyard. It should be way more work. So look for that next time. That is gonna do it for the saw mill move.