I had a pretty full week working with Triton and April.  We shot a bunch of videos over the few days that they were here.  April and I worked on a serving tray project and she also helped me with the bandsaw mill.

A pair of retirement shadow boxes. I make these for retiring military personnel as a way to say thank you for their service.  First, is a cedar lined Sea Chest style, with a tray for displaying the awards and the bottom for storing other keepsakes. I used box joints for the construction of the box as well as the tray… and yes, I used a CNC for the custom made EOD badge on the front. The box and tray are solid cherry. The badge is Black Walnut, Cherry and Maple .
Second, is a dartboard style case with a custom designed Fire Protection appliqué which I made as one piece and then split down the middle by hand. I cut half circles in each door to show the bugles etched in the glass which is directly over the top of the folded 5’X9′ ceremonial flag that will be given at this service member’s retirement. The requested custom patina brass plaques to be mounted on the inside of the doors and inside of the shadow box.
Website: http://www.chetswoodshop.com/gallery

I’ve attached some photos of a wine box I made for my cousins wedding. It’s made from strips of pallet wood that were intended for a similar styled table I had in mind. It’s my first smaller scaled project, and I really enjoyed the intricacies of using the burning method(also my first time).  The burning was done with a hobby soldering set and a stencil using carbon paper.  Overall, I’m very please with the outcome. As I’m sure all woodworkers can relate, the project wasn’t perfect(in my own mind), but perfect enough that everyone can truly appreciate it.

A bed frame that I was contracted to make for my friends wife. It was a lot of fun to make, and great practice with joinery on such a large piece! He originally wanted it made out of barn wood but the barn in question didn’t have nearly enough weathered wood to make what he had in mind, so I did some research and found the Vinegar and steel wool solution. This worked very well I think and gave the frame a nice look that matched the Country theme of their house very well!  I cut mortises in the posts and tenons on the top and bottom rails of the head and foot boards, and did Tongue and Groove joints for the panels.

A beautiful set of collapsible saw horses for the shop; Japanese style

This was my first project featuring a live edge slab. The slab is from the very outside of the tree and so has a lot of sapwood and somewhat sharp edges.  It’s all walnut except the stretcher connecting the legs (I don’t know what type of wood that is, it’s something I had laying around the shop and I didn’t have enough walnut at the time).
Anyway I came up with this cool design for a base that I think complements the odd shape of the top. The joinery is all mortise & tenon. For the joints in the legs I added some dowels I made on the lathe out of some very dense hardwood (to reinforce the joint, but also mostly because I think they look good). You can see that pretty well in one of the pictures.
http://www.instagram.com/Ross_Peters_Woodworking
Submit your viewer project: Email me pictures and a description of your project and I’ll feature your project on the show.
Sponsors 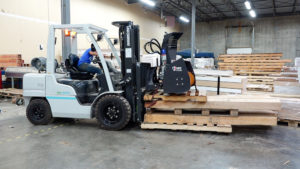 Getting the warehouse ready for slabs

Today I am heading over to the warehouse to shuffle some things around and organize the place. As I have been moving, I have been 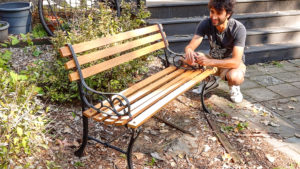 Making new slats for a garden bench from a rotten log

I’ve been working on the serpentine chest of drawers for a bit too long, and I’m looking for a quick side project to knock out 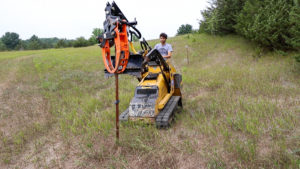 Cleaning up around the future shop and sawmill site

We’re finally having a little bit of cooler weather, so I thought I would get some stuff done outside. I haven’t really brought you along